The Red Electric Trail from Peter J. DeCrescenzo on Vimeo.

A reader and SW Trails member just tipped me off to a new video produced to promote the Red Electric Trail project. It’s an excellent overview of what’s being worked on and it features an interview with none other than U.S. Congressman Earl Blumenauer. For more on the Red Electric, see our update back in October and visit SWTrails.org. 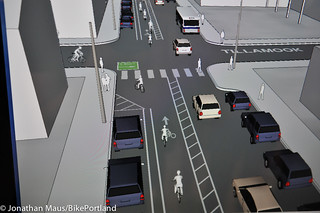 PBOT is still looking for funding to
improve bike access on N. Williams.

What do bike boulevards in Grants Pass, a new trail from Hagg Lake to McMinnville, and the North Williams project have in common? They’re just a few of the 53 projects from all over the state being considered for $8.5 million in grant funding from the Oregon Department of Transportation (ODOT). 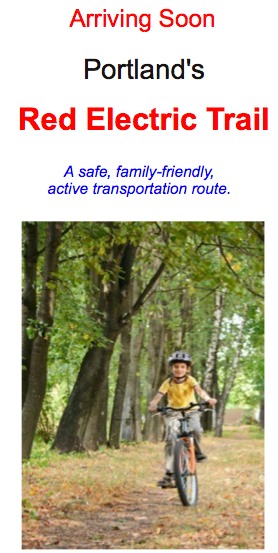 My inbox is full of updates on major multi-use path projects happening in and around Portland, so I’ve decided to round them up into one post. (And yes, you’ll notice I don’t like to refer to them as “trail” projects, even though that word is in their official names. I just feel that the word “trail” only perpetuates the false notion many people have that these paths are for recreation and shouldn’t be considered serious transportation corridors… which they are.)

When complete, the Red Electric Trail will connect the Fanno Creek Trail in Beaverton to Portland’s Southwest Waterfront district. As per usual, the planning and actual construction has been agonizingly slow (Portland City Council released a study of the trail in 2007); but lately things are on the upswing. According to project volunteer Cole Trusty with SW Trails, Portland Parks & Recreation is actively negotiating right-of-way with property owners along the route, a new bridge at the western end of the project is set to be built next summer, and other pieces are falling into place. Trusty recently shared a new brochure (PDF) he just made to “develop the community support necessary to maintain momentum” on the project (PDF). The brochure is full of great background information on the project and it comes with a quality route map. He’s already passed out 1,000 copies and plans to keep on giving them out. Trusty says there’s also a new video on the works and there’s even a new Facebook page you can “Like” to stay updated.

“N. Greeley as an alternative to the Cement Road is unacceptable. The trail is to be a Willamette River Greenway Trail, not a tour of a truck route.”
— NPGreenway statement

The alignment for the North Portland Greenway Trail project being proposed by the Portland Parks & Recreation bureau is continuing to draw sharp criticism from activists and advocacy groups.

PP&R is hosting an online comment form to get feedback, and — as the comments to our story yesterday make clear — many people are not impressed that several segments of the proposed alignment use heavily trafficked streets and conventional bike lanes. The idea of a “trail” — or what I prefer to call a path — is that people can expect a dedicated, non-motorized facility away form the dangers and stresses of automobiles. 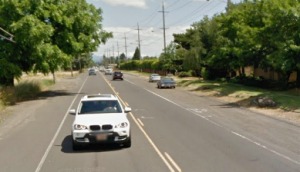 A one-mile stretch of NE Sandy Blvd will get
rebuilt with bike lanes and a new sidewalk thanks
to a $3.8 million ODOT project.

The Oregon Department of Transportation (ODOT) is set to stripe new bike lanes on a one-mile section of NE Sandy Blvd from NE 122nd Avenue to NE 141st in east Portland. Construction on the $3.865 million project begins this week.

Currently, Sandy has one standard vehicle lane in each direction, with unimproved shoulders on both sides. Cars park in the shoulders, which lack sidewalks or bike lanes and are full of gravel and potholes. The project will rebuild Sandy, making significant changes that include: 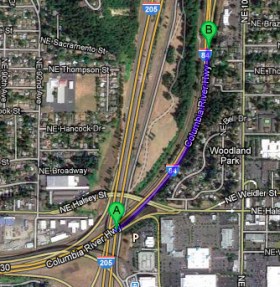 Proposed new lane on I-84 in east Portland.

In a rare bit of love for freeways, on Thursday July 19th, Metro (Portland’s metropolitan planning organization) approved funding for a project that will add capacity to an interstate located within Portland city limits. The $6 million project will extend an auxiliary lane on eastbound Interstate 84 one half mile between the Halsey St. and northbound Interstate 205 exits. Metro says the project is being “fast-tracked by ODOT after it found cost savings around the state.”

It’s interesting to note how Metro councilors — who pride themselves on supporting investments that improve bicycle and transit access — talk about why they supported this project. I’m also covering this because I think it’s important for people to understand how much we spend to alleviate congestion and just what results are expected for this $6 million investment. 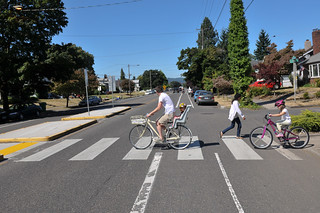 It’s hard to overstate the importance of the Portland Bureau of Transportation’s neighborhood greenway program. The combination of considerable expertise in, and dedication to, neighborhood traffic safety from veteran staffers and engineers, and the $1 million (or so) annual budget thanks to Mayor Sam Adams, has resulted in a burgeoning and connected network of neighborhood greenways (a.k.a. their previous name of bike boulevards) that just keep getting better and better.

As I ride around, I’ve noticed the progress in almost every quadrant of the city; from new crossing treatments in outer southeast to speed bumps right outside my front door in north Portland. According to PBOT, they’ve got nine projects that are either currently under construction or just recently completed. 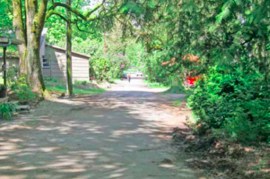 Some options would have turned
this into a larger road to handle 200
extra cars daily.
(Photo: Multnomah County)

The construction of the new Sellwood Bridge is already having some impacts on the nearby transportation network. As The Oregonian reported last month, a decision to relocate an access road to Highway 43 for the Macadam Bay houseboat community just north of the bridge “ignited a fierce debate”.

At issue was where to put the estimated 200 cars that go between the houseboats and the highway every day. The county considered a myriad of options, but there was opposition to each of them. Of particular interest to readers of this blog is that the Willamette Greenway trail begins on SW Miles Place and runs parallel to Highway 43 in this same area. Also, as part of the Sellwood Bridge project, the trail will be improved and connected to the bridge. 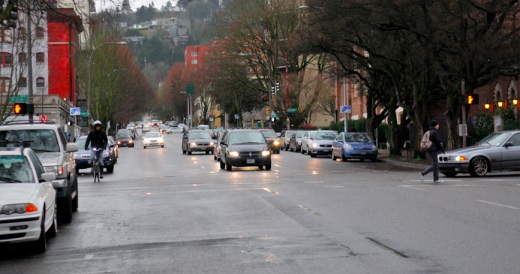 The City wants to create dedicated bike access on SW 12th, but business owners and developers aren’t so sure it’s a good idea. Yet.
(Photo © J. Maus/BikePortland) 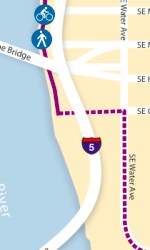 Of particular interest is the closure of the SE Powell overcrossing and a detour near the south end of the Eastbank Esplanade.

Beginning June 15th and continuing for “about a year” TriMet will be working on the demolition of the SE Powell Blvd overpass. The overpass will be closed through the summer of 2013 while a new structure is built in its place.

Below are more details from TriMet about the work they’re doing as well as detour maps for both areas: 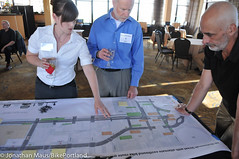 Last night the City of Portland and representatives from the Lloyd Transportation Management Association hosted an open house for their NE Multnomah Street Transportation Pilot Project. It was the first time the public was shown the proposals for this project.

If you recall, back in October a citizen committee ended a 10 month public process with a 12-1 vote in favor of moving forward in making NE Holladay the main east-west spine for safe and convenient bicycling through the Lloyd District. That lone dissenting vote was held by the most powerful man in the room (or perhaps just the most feared) — Wade Lange of commercial real estate firm Ashforth Pacific. Lange — who was also representing a San Diego real estate firm that had just purchased $92 million worth of Ashforth property (the majority of which is on Multnomah Street) — never made it clear exactly why he opposed the project on Holladay; but despite being outvoted 12-1, he convinced the City of Portland to turn their attention away from Holladay and toward Multnomah instead.