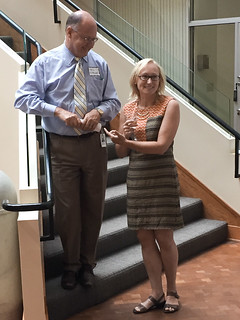 Speaking of parties, last night I attended an event hosted by the Portland chapter of the Women’s Transportation Seminar (a group that promotes professional advancement for women in the transportation industry). We met in the lobby of CH2M Hill, the massive consulting and engineering firm conveniently located just steps from the MAX line on Southwest Lincoln and 4th Avenue.

I snacked on light appetizers and chatted with a few folks before TriMet General Manager Neil McFarlane grabbed the crowd’s attention and shared a few words. He mostly thanked a bunch of people (many of whom were in the room) who helped deliver the $1.5 billion project. He also touted a long list of stats that spoke to the project’s economic impact. “This project happened just when Oregon needed it most,” McFarlane said, “We created 14,000 jobs at a time when the state was economically depressed.” 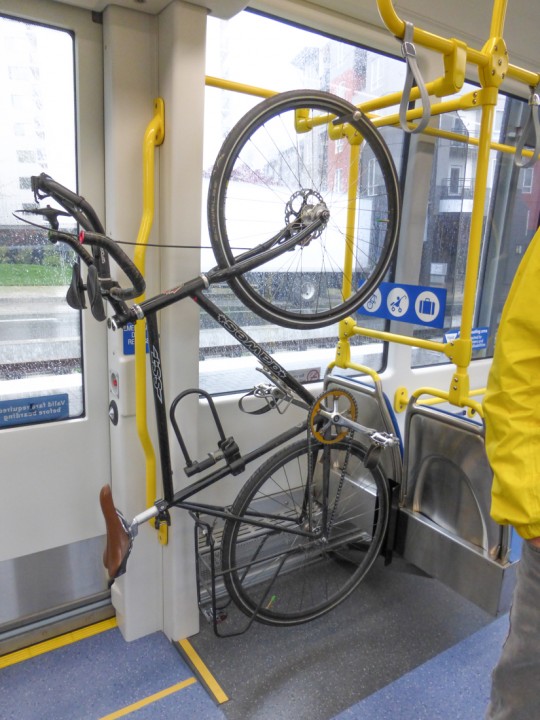 TriMet has spent just over $79 million on 18 new MAX trains that will run on the Orange Line when it opens in September. If you board the new “Type 5” trains with a bike, you’ll notice that they differ in some key ways.

Yesterday TriMet gave a few lucky folks a chance to step inside and get a closer look. Our correspondent Jim Parsons was one of them. 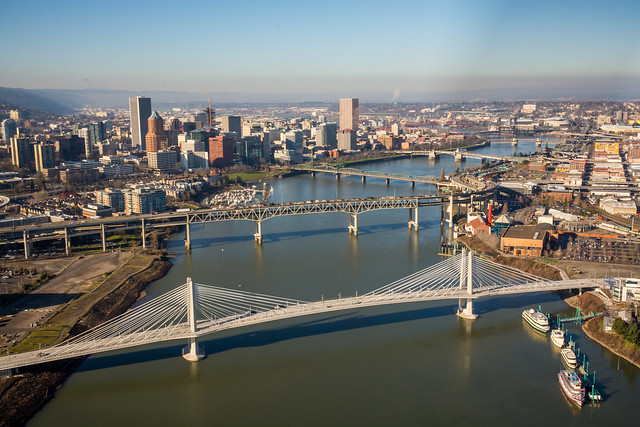 TriMet has at least $34 million, and maybe much more, unspent within the project’s scope of work.
(Photo: TriMet)

Four years after the Portland area’s transit agency furiously chopped costs and recruited other local governments to balance the budget for its new $1.5 billion rail line, the price tag so far is turning out to be more like $1.3 billion.

Though a few remaining bills have yet to be paid, the combination of far more cost-efficient track and systems construction than expected and persistently low interest rates has been so large that TriMet has been searching for new ways to spend some of the unexpected surplus locally. 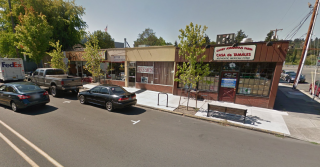 A Google Street View image of the building that
could be destroyed.

Here’s an odd story forwarded to us this afternoon by reader Tim D.

According to Pamplin Media, a downtown Milwaukie business that already has a parking lot has gotten permission to demolish a row of sidewalk-facing shops on its small commercial Main Street in order to build a parking lot.

The property owner, regional credit firm Reliable Credit, doesn’t seem to have immediate plans to destroy the row of buildings at 10605 SE Main Street, which county records value at $180,000. Instead, the firm’s owner is apparently acting to ensure the company has the right to do so in the future. 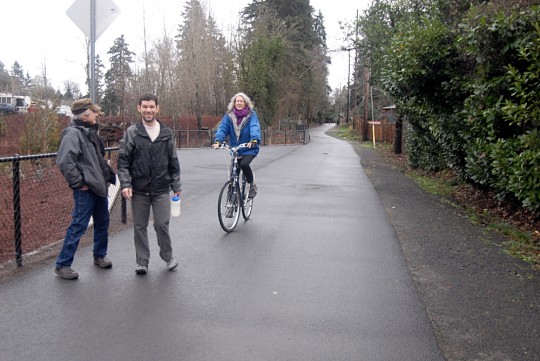 Their dream, they say, would be to use three-to-five-story apartment buildings and clusters of new small houses to turn their corner of unincorporated Clackamas County — the last stop on the new MAX line — into a bustling but more nature-rich alternative to Southeast Division Street.

It’s less than one year to go until TriMet takes the wraps off the Orange Line, a 7.3 mile extension of the MAX light rail system that will connect downtown Portland to Milwaukie in northern Clackamas County. While the marquee component of the $1.5 billion project, the Tillikum Crossing Bridge, won’t open until next fall, many parts of the new project are already open for business. 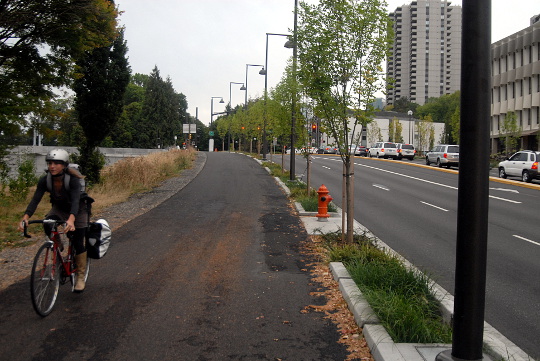 The wide sidewalk along SW Naito Parkway between Lincoln and Harrison.
(Photos: M.Andersen/BikePortland)

Thanks to TriMet’s nearly completed Orange Line, the main bike route to the South Waterfront got smoother this week.

But as we discussed in a post last week, there are still significant complications with the bike connections to Portland State University that could have been solved if it had been possible to run a bike/walk/skate path on the new MAX viaduct. 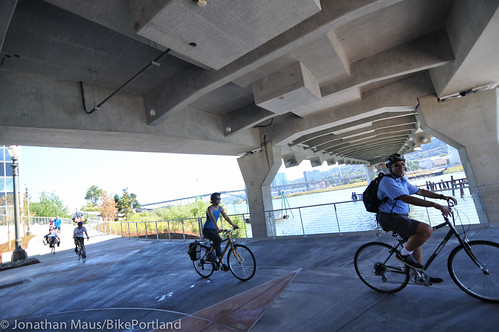 Some of the first riders to ever travel on the new section of path under the Tilikum Bridge on the east side of the Willamette River.
(Photos by J. Maus/BikePortland)

After a 14-month closure, TriMet re-opened the Eastbank Esplanade path (which some are calling the Eastside Greenway Trail) between OMSI and SE Caruthers Street this afternoon. The new, 14-foot wide path begins just south of OMSI, goes under the Tilikum Crossing Bridge and then back up to Caruthers just south of the Portland Opera headquarters.

I rolled over today for a closer look. 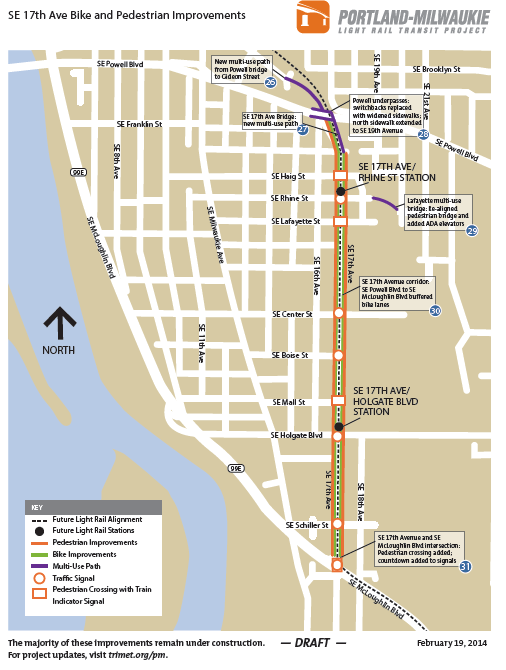 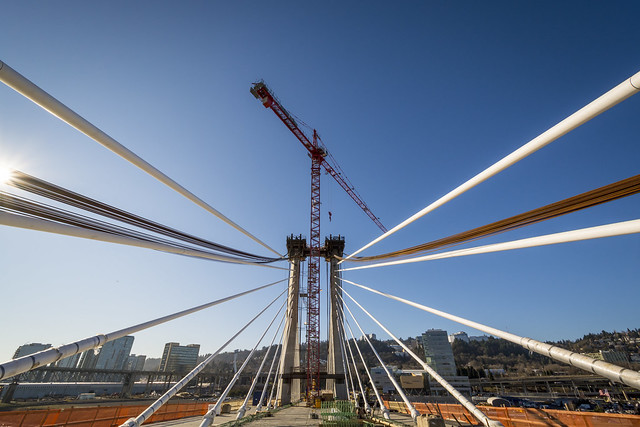 Cables on the west tower of TriMet’s new car-free bridge over the Willamette River.
(Photo by TriMet.)

The 7.3-mile light rail line opening next year through the South Waterfront, Southeast Portland and downtown Milwaukie will, of course, build a new car-free bridge across the Willamette, the biggest such crossing in the country.

But even if you don’t count the full $135 million bridge, the Portland-Milwaukie Light Rail project will also include more than $40 million in bicycling and walking facilities on nearby streets.

For comparison: in 2008, the city estimated the value of its entire bikeway network at $60 million. 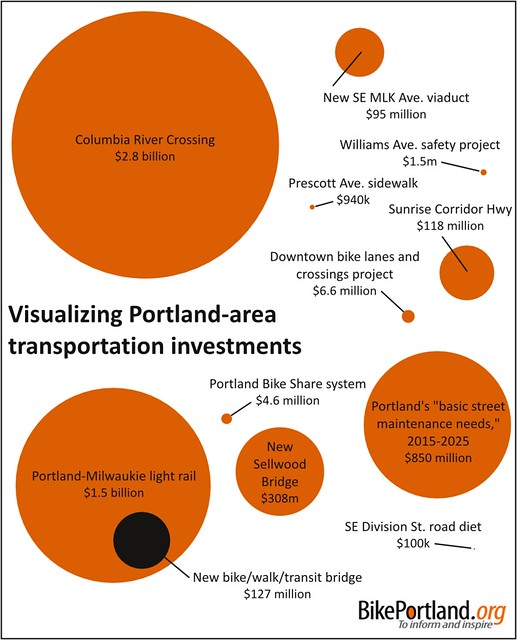 TriMet’s new bridge is shaping up, but it still needs a name.
(Concept drawing)

All joking aside, what is that new Willamette River bridge going to be called? Starting this morning, the citizens’ committee appointed to decide is asking for ideas.

In construction for more than a year, the new cable-stay bridge is being built by TriMet as part of its Portland-Milwaukie Light Rail Project. The agency says it’ll be the only one in the country to carry buses, trains, emergency vehicles, and people on bike, foot or skate, but no private cars. It’ll connect the fast-developing Southeast Division Street area with the South Waterfront. 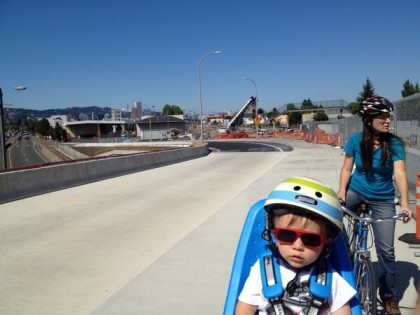 Inner southeast Portland’s summer of detours is finishing with an early Christmas present: great big human-friendly new crossings of Powell Boulevard and the nearby railroad tracks at SE 17th.

The new bridge, built by TriMet as part of the Portland-Milwaukie Light Rail Project, opened to traffic Aug. 30. Last weekend, bike user Howard Draper grabbed the photo at right, so we decided to head over and take a look.

It’s an improvement in many ways, though there are a couple problematic features worth considering.