The bike lane in the middle of a Portland freeway

Did you know Portland has a bike path in the middle of an interstate freeway? END_OF_DOCUMENT_TOKEN_TO_BE_REPLACED 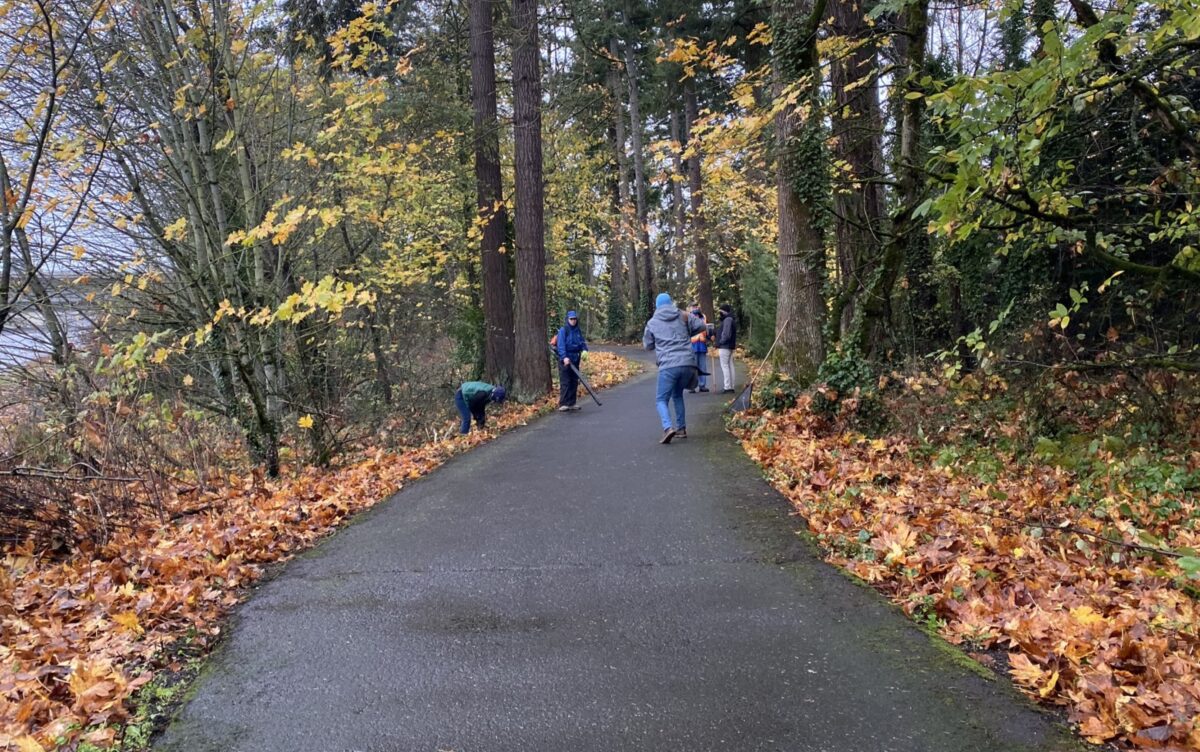 END_OF_DOCUMENT_TOKEN_TO_BE_REPLACED

Man arrested after stabbing someone walking on I-205 path 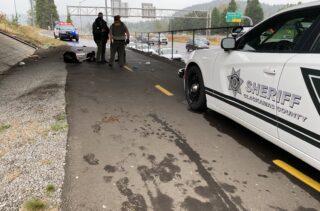 An 18-year old man was treated by police then rushed to the hospital last week after being stabbed while walking on the I-205 multi-use path south of Portland.

According to the Clackamas County Sheriff’s Office, Tommy Smith was walking on the path where it goes under Highway 224 (about 3.7 miles south of the Springwater Corridor) when he had an interaction with another man, 50-year-old Cain Newcomb. “Initial interviews revealed the victim had asked suspect for a cigarette. This question appeared to make the suspect upset. An argument ensued, and the suspect stabbed the victim,” the Sheriff’s Office wrote in a statement. Smith was stabbed in the chest.

Another person prevented Newcomb from escaping until police arrived. END_OF_DOCUMENT_TOKEN_TO_BE_REPLACED

Man hit while bicycling on I-205 path remembered by friends 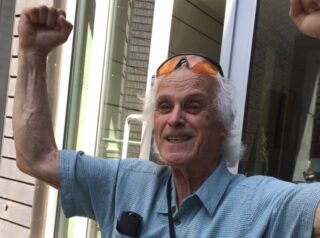 Martin Weiner. One of his friends said, “This last season he was really loving his cycling as an outlet from virus confinement, making regular rides out the Springwater to Gresham.”
(Photo courtesy Davis Te Selle)

END_OF_DOCUMENT_TOKEN_TO_BE_REPLACED

At victim’s urging, no jail time for people who tied string across I-205 path 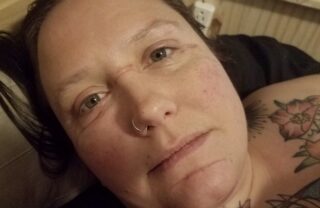 Last week the man accused of tying a string across the I-205 bike path in order to hurt someone was sentenced to 20 hours of community service. When we shared that on Twitter, some of our followers felt the consequences should have been more severe.

After all, the string caused several lacerations to the face and neck of Montavilla resident Carlene Ostedegaard, who was biking home from work when she became ensared in the trap.

Today the Multnomah County District Attorney’s Office announced that it was Ms. Ostedegaard’s request that the people who caused her injuries were not jailed.

The DA’s office said the parties in the case have reached a pretrial resolution. 23-year-old Raven Jones was the “primary actor” in the incident and pleaded to one count of assault in the third degree, a Class C felony. Here’s more from the DA’s office:
END_OF_DOCUMENT_TOKEN_TO_BE_REPLACED 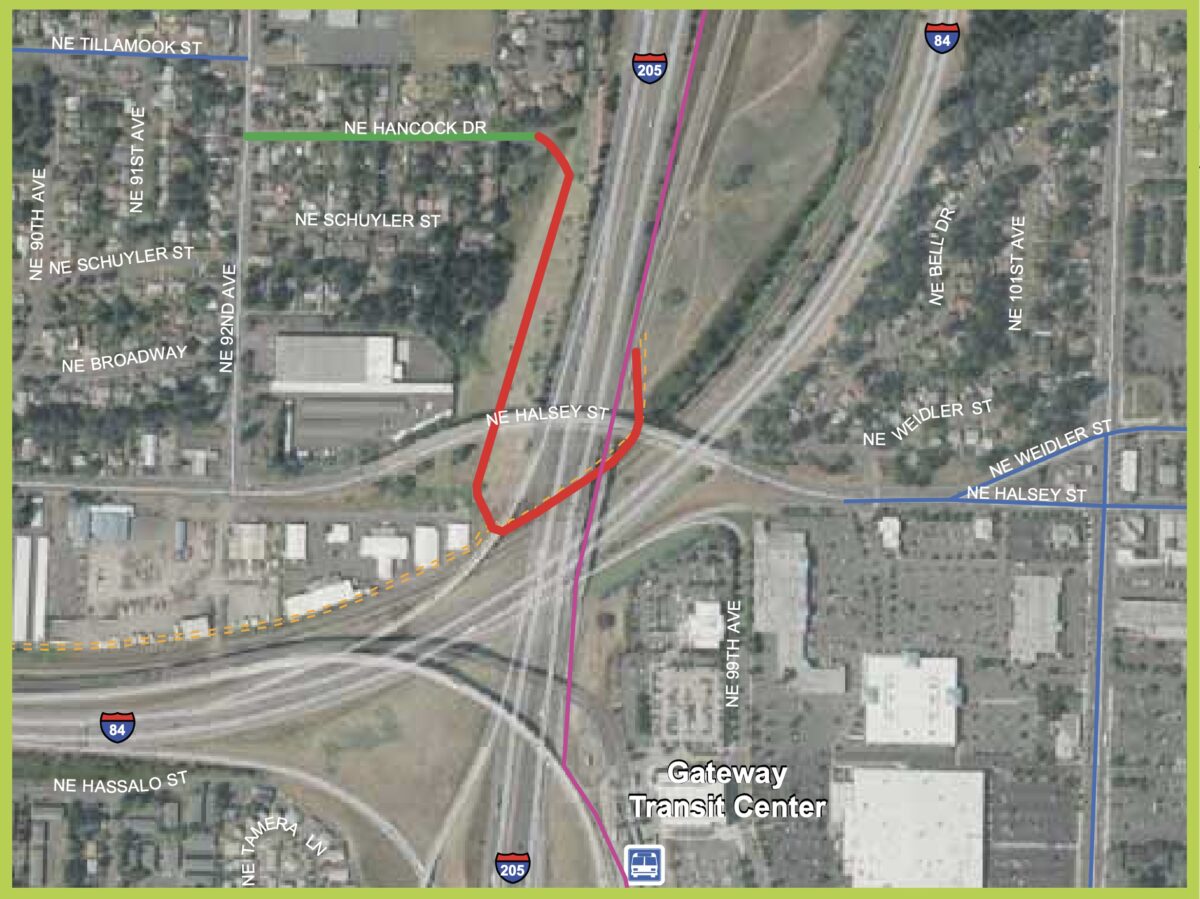 “The sooner this happens, the better. This crossing is currently a major obstacle to even the most dedicated bike commuter.”
— Carl Alviani

At their meeting tomorrow, Portland City Council will formally accept a $1.68 million grant from the Oregon Department of Transportation for the I-205 Undercrossing project.

This project is a key link to several projects in east Portland and will help create access to the bike park at Gateway Green as well existing and future neighborhood greenways, paths, and bikeways. The proposed project will create the first section of the long-awaited Sullivan’s Gulch path. It will build a new path connecting the I-205 path at Gateway Green on the east side of 205 to NE Hancock Drive on the west side of the freeway. The plan is to go under the I-84 westbound on-ramp and use a mix of railroad and vacant ODOT highway right-of-way.
END_OF_DOCUMENT_TOKEN_TO_BE_REPLACED 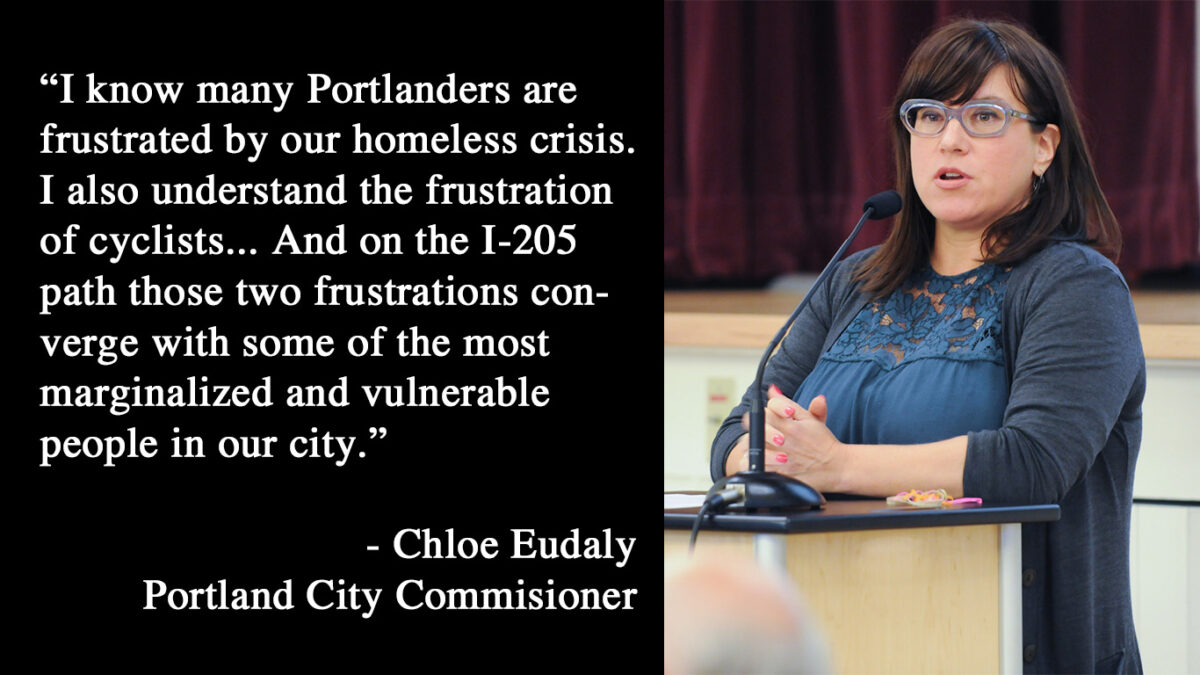 Last week I highlighted conditions on the I-205 path at NE Sandy Boulevard. The response to the coverage here and on Facebook was overwhelming.

My intention was to make people aware that this path and others have become dramatically impacted by our homelessness crisis. Not only was the path full of personal belongings and discarded items, many of our fellow Portlanders have become so desperate for a place to live that they built shelters directly on the path — nearly blocking it in some sections.

The comments here on BikePortland were mostly productive and I think overall we’ve all learned a lot about the various issues at play. Facebook was a different story. Too many of the 1,300 or so comments were useless and mean. So, after over 220,000 views and 2,500 shares in just four days, I took the video down and posted a note to explain why.

On Saturday, City Commissioner Chloe Eudaly, who oversees the Portland Bureau of Transportation, left a comment on that post that I think merits more attention. I’ve pasted it below: END_OF_DOCUMENT_TOKEN_TO_BE_REPLACED

Conditions on the I-205 path are unacceptable

With so few safe and direct alternatives, the I-205 multi-use path in east Portland is a crucial backbone in our transportation network. Unfortunately it’s been rendered nearly unusable due to an abundance of trash, personal belongings, and makeshift homes that have been built upon it.
END_OF_DOCUMENT_TOKEN_TO_BE_REPLACED

Comment of the Week: A woman’s fear of riding on the I-205 path 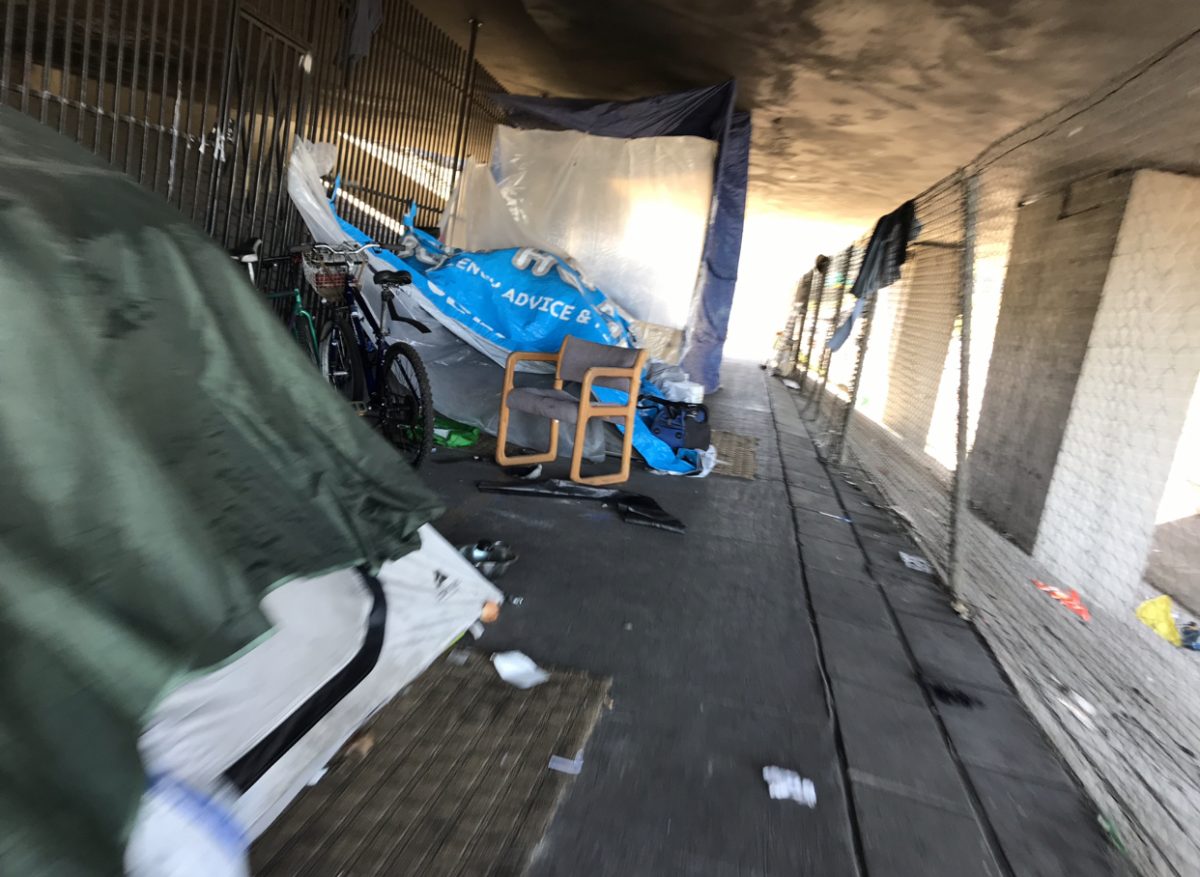 Southbound on 205 path where it goes under Sandy Blvd.
(Photo: Jonathan Maus/BikePortland)

A comment written by Roberta on March 9th touched on an issue that we’ve addressed several times in recent years: People who live on and adjacent to multi-use paths.
END_OF_DOCUMENT_TOKEN_TO_BE_REPLACED 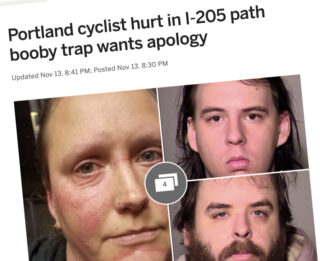 Screen shot of coverage of the incident by The Oregonian.

Two of the three men arrested last week for stretching string across the I-205 bike path are set to make their first appearance in court today.

On Friday, November 9th, Portlander Carlene Ostedegaard was riding home from work on the path just south of the Division Street MAX station when she pedaled into what Portland Police described as a “booby trap.” She suffered laceration injuries on her face.

DA’s Office Communications Director Brent Weisberg says following the investigation one of the men, Dakota Murphy, was issued a “no complaint”. The other two, Jones and Tolman-Duran, have been re-booked into the Multnomah County Detention Center and are now charged with one count each of felony assault in the third degree. Their initial booking was for misdemeanor assault.
END_OF_DOCUMENT_TOKEN_TO_BE_REPLACED