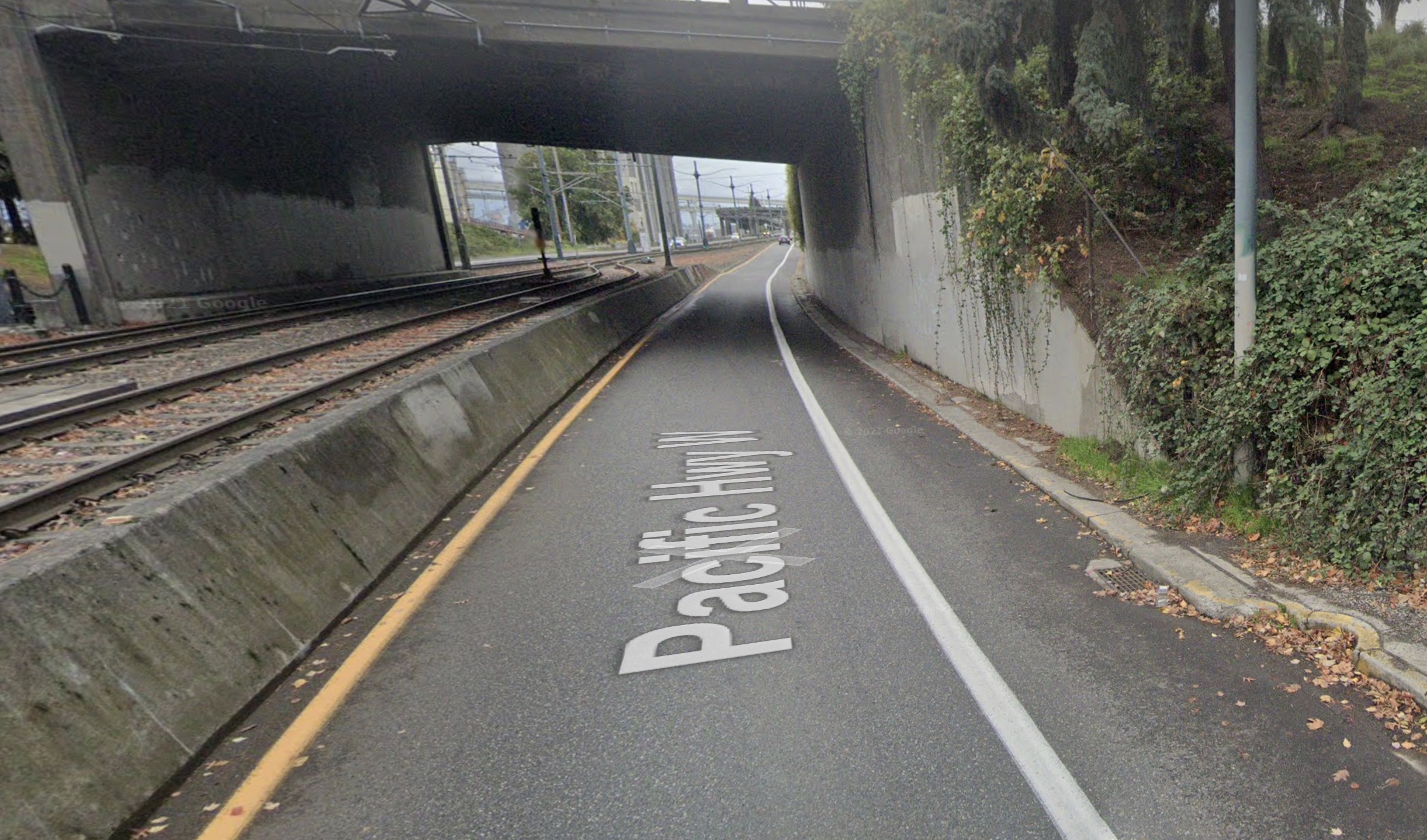 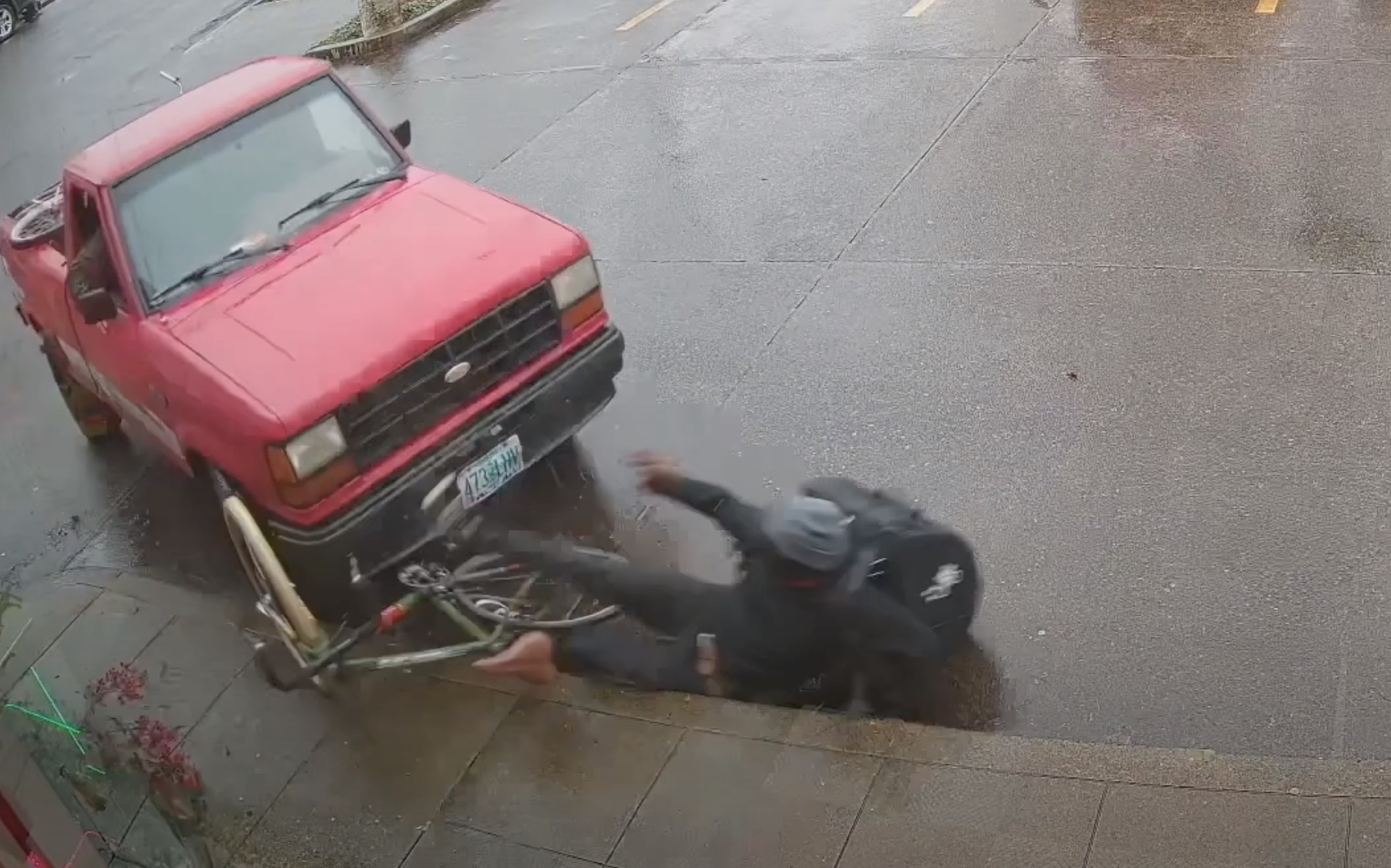 Someone used their pickup truck as a weapon to assault a bike rider in Portland on Friday. The altercation followed an interaction between the two road users and might have been fueled by road rage. It’s still unclear what – if anything – might have provoked the assault.

Footage shared on Reddit less than an hour ago shows the driver of a small red pick-up follow a bike rider into a parking lot at Southeast 3rd and Taylor. The driver then intentionally rams their truck into the man before reversing and driving away. (It’s a felony crime in Oregon to hit someone with your vehicle and not stop to investigate it.)

The video (below) from a nearby business surveillance camera was uploaded to YouTube by a user named Aaron Sturgill who claims to be friends with the victim. 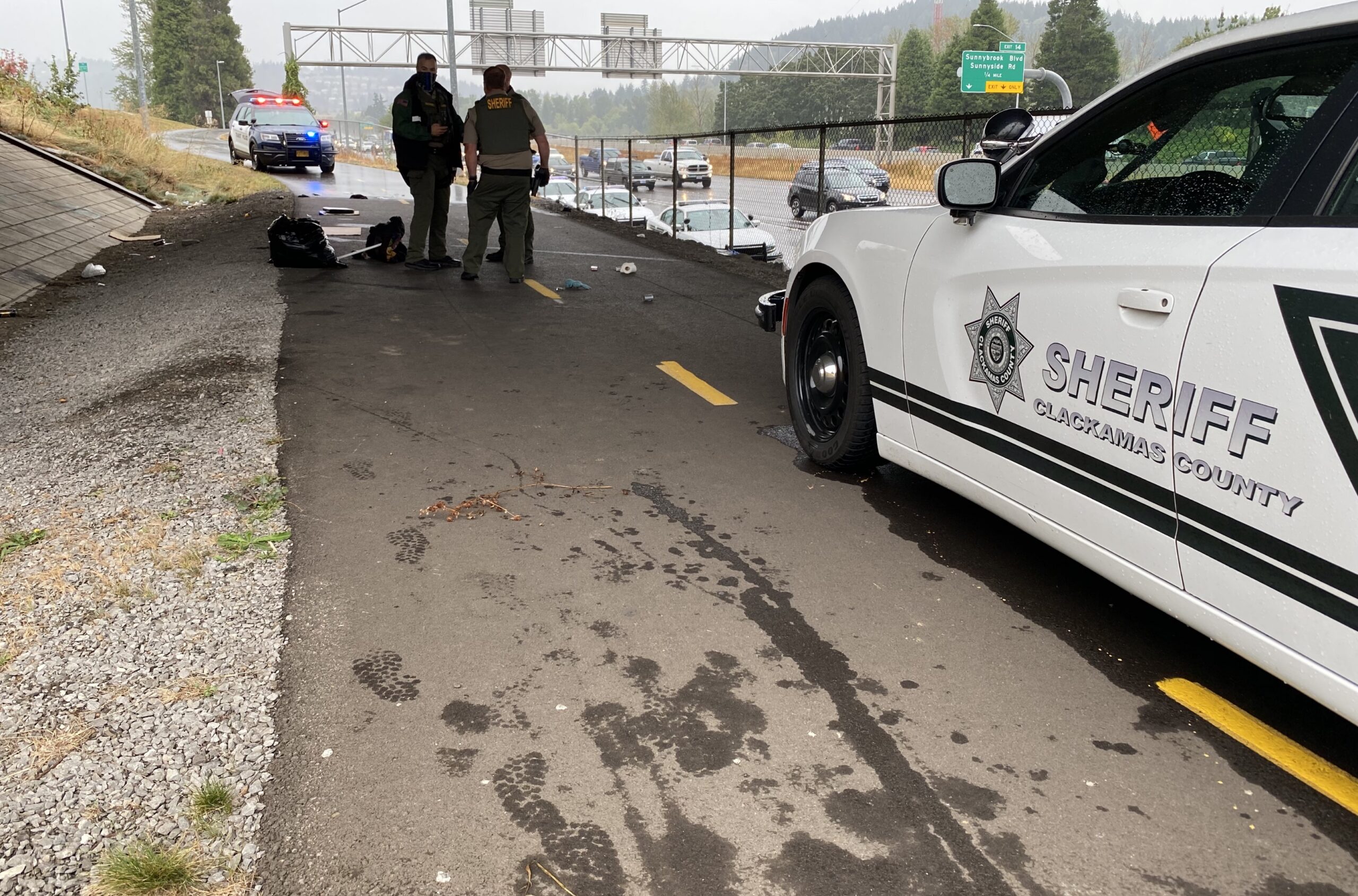 An 18-year old man was treated by police then rushed to the hospital last week after being stabbed while walking on the I-205 multi-use path south of Portland.

According to the Clackamas County Sheriff’s Office, Tommy Smith was walking on the path where it goes under Highway 224 (about 3.7 miles south of the Springwater Corridor) when he had an interaction with another man, 50-year-old Cain Newcomb. “Initial interviews revealed the victim had asked suspect for a cigarette. This question appeared to make the suspect upset. An argument ensued, and the suspect stabbed the victim,” the Sheriff’s Office wrote in a statement. Smith was stabbed in the chest.

Another person prevented Newcomb from escaping until police arrived. 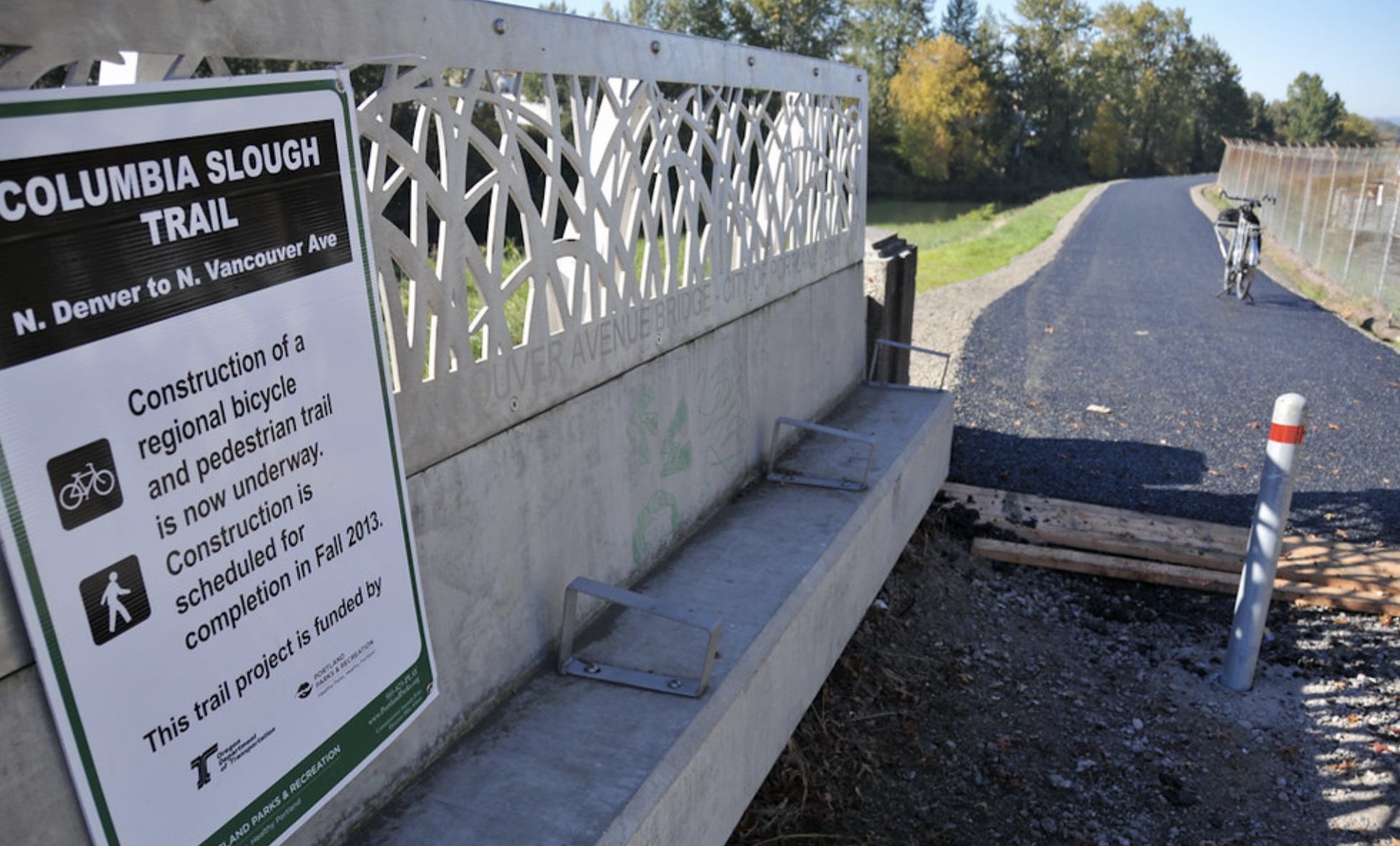 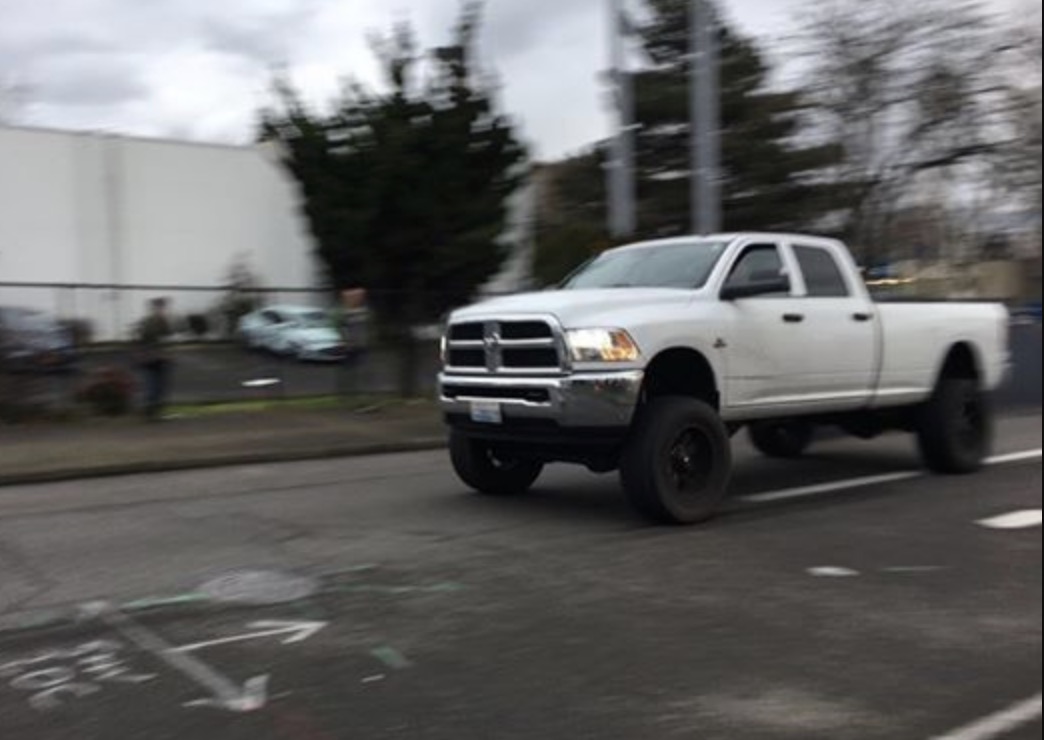 The message below came to us from a reader via Facebook. I’m sharing it here with permission from the victim.

Today, Feb 8, 2020, my spouse and I were returning from a ride along the esplanade. I’m a bit slow because I’m recovering from a full hysterectomy and appendectomy. My husband was waiting for me along the curb headed north on N. Williams just after Broadway.

As I was crossing N. Broadway (during green light in bike lane), a Dodge Ram 2500 began to approach me with driver revving the engine billowing black smoke and squealing the wheels. At one point his truck stopped next to me and the white male driver stepped on the gas pedal with his brakes on and started fish-tailing until the backend of his truck almost hit me. It was terrifying. 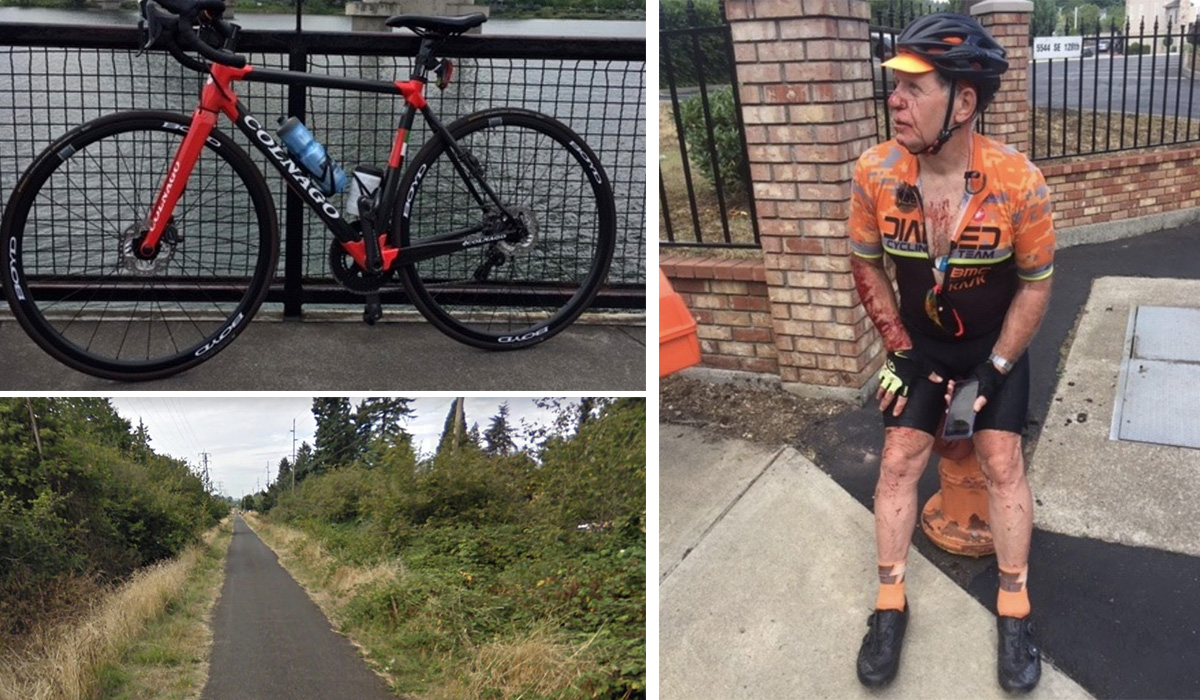 Back in July, Jay Hamlin was the victim of a scary assault and robbery while bicycling on the Springwater Corridor in southeast Portland.

Today the Multnomah County District Attorney announced they arrested a suspect in connection with the case and have charged him with felony robbery, assault and theft. 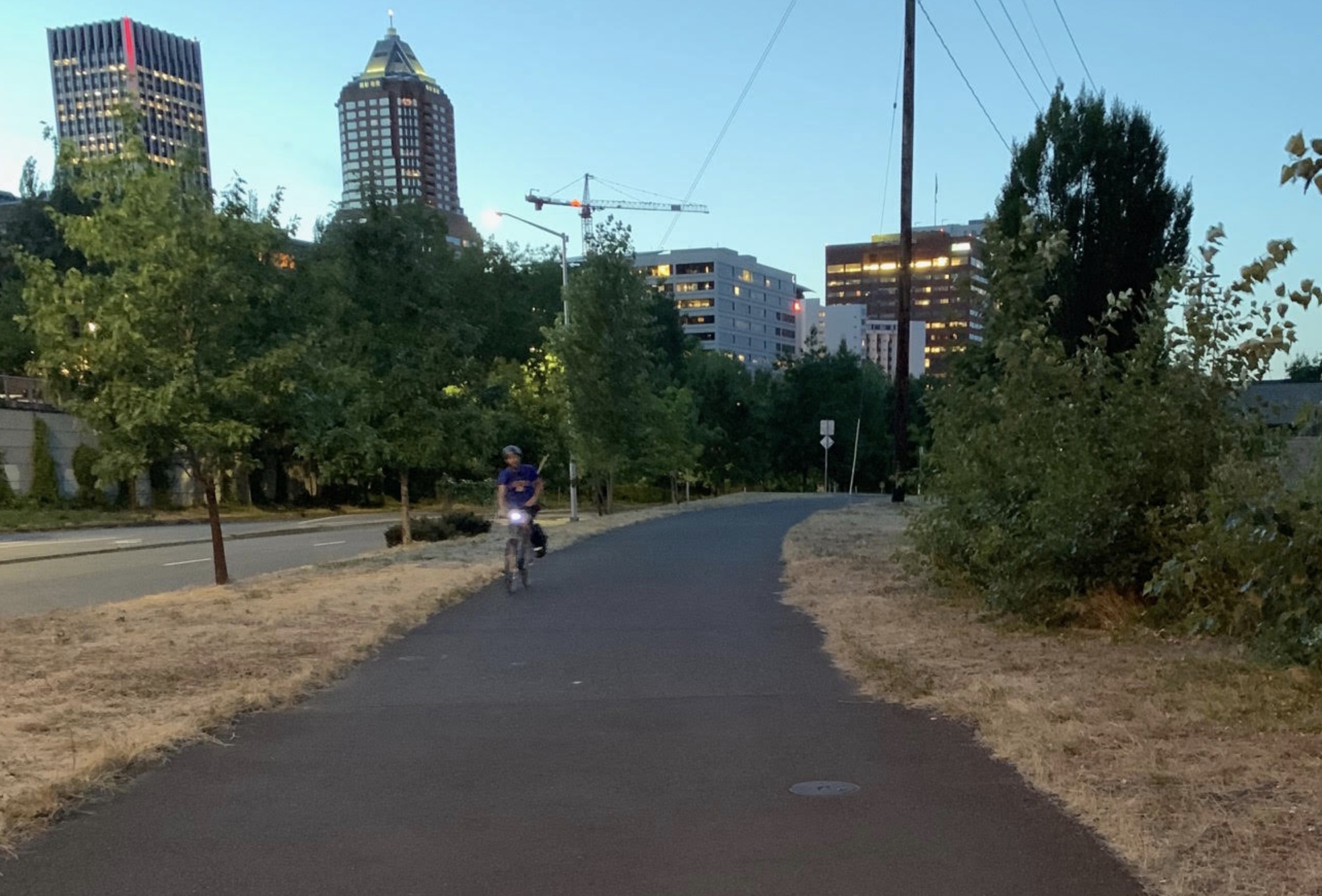 A reader says he was attacked while bicycling in southwest Portland Thursday (August 1st) and he wants to know if anyone saw it happen. This assault took place just two weeks after another man was shoved off his bike while riding on the Springwater Corridor path.

The man, who wants to remain anonymous, has lived in Portland for about a year. He told me he was biking northbound on the path adjacent to SW Harbor Drive just north of Harrison at around 8:05 pm when it happened.

Here’s more from the victim: 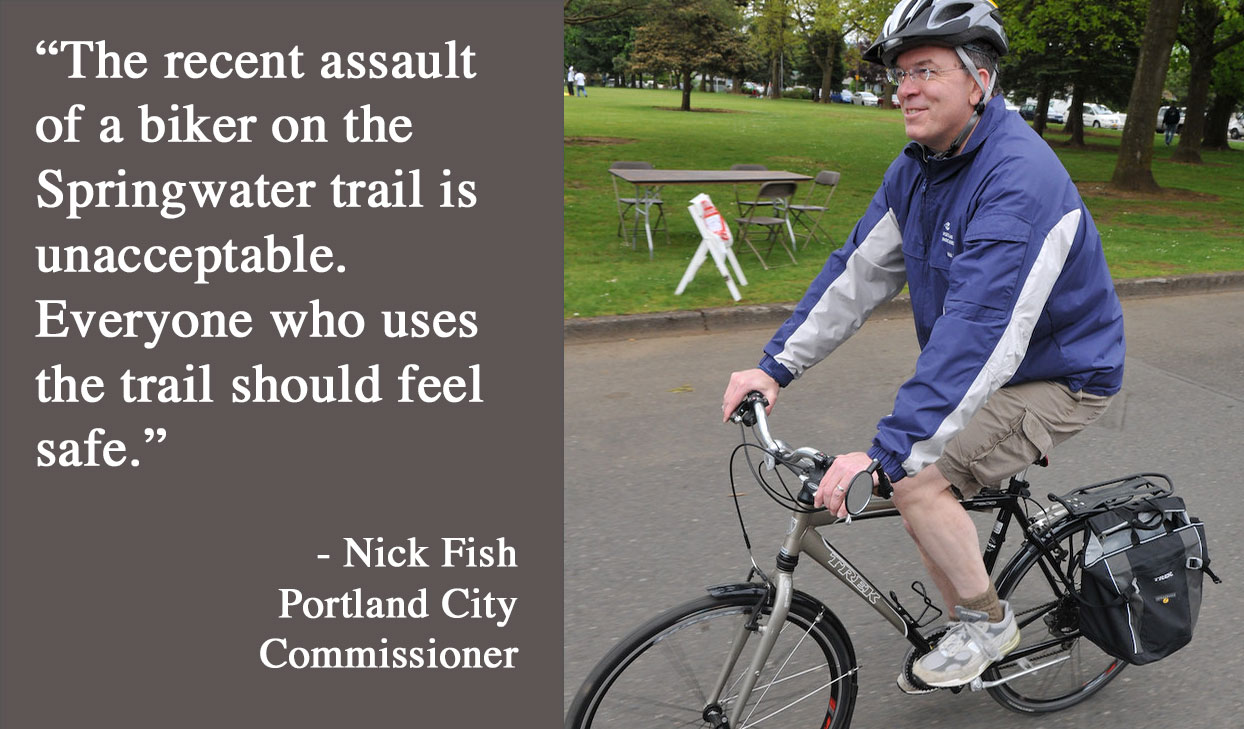 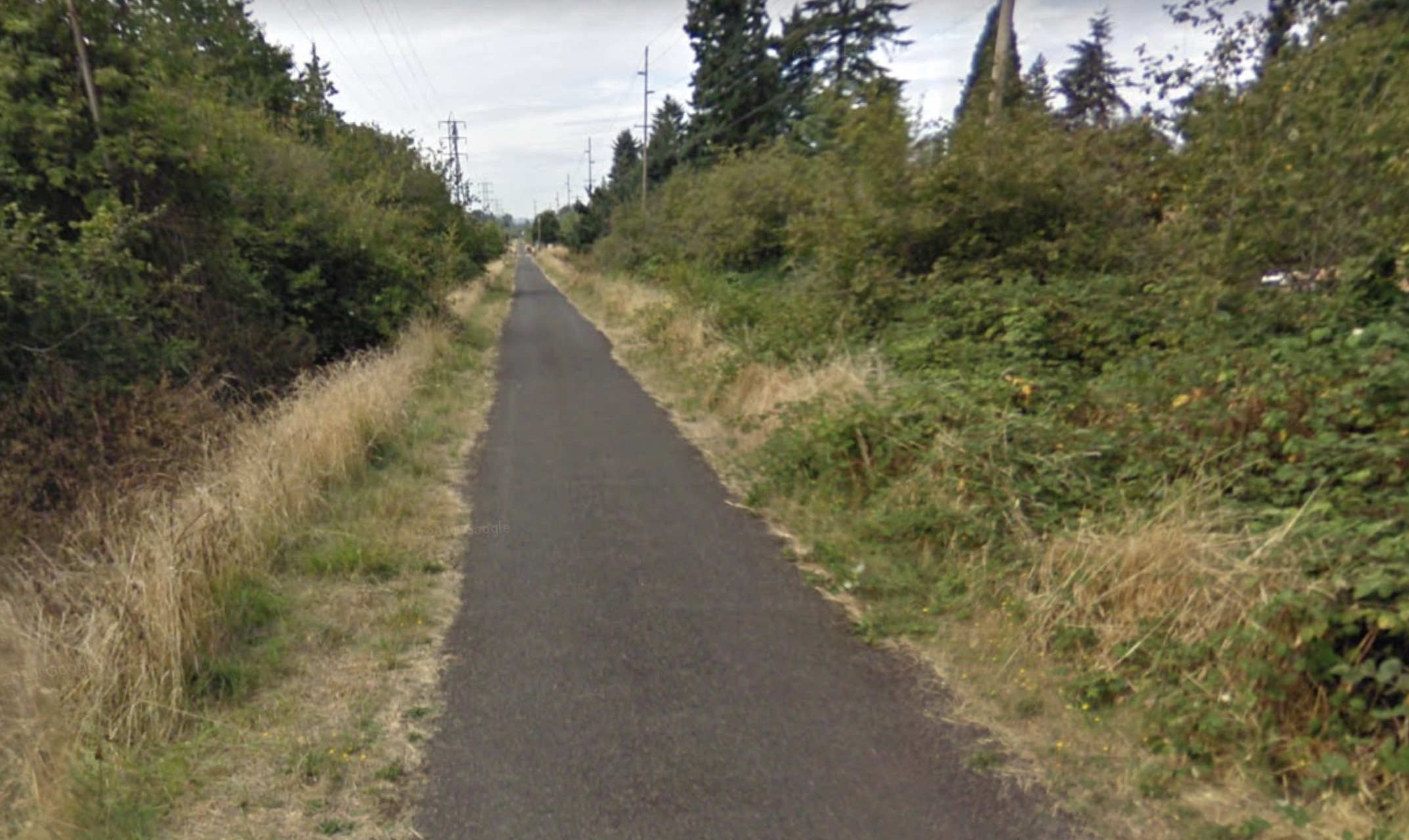 A nightmare came true for 69-year-old Jay Hamlin while he was riding on the Springwater Corridor path Thursday afternoon. It’s the latest incident that illustrates the lawlessness of the popular linear park and the vulnerability of people who use it. 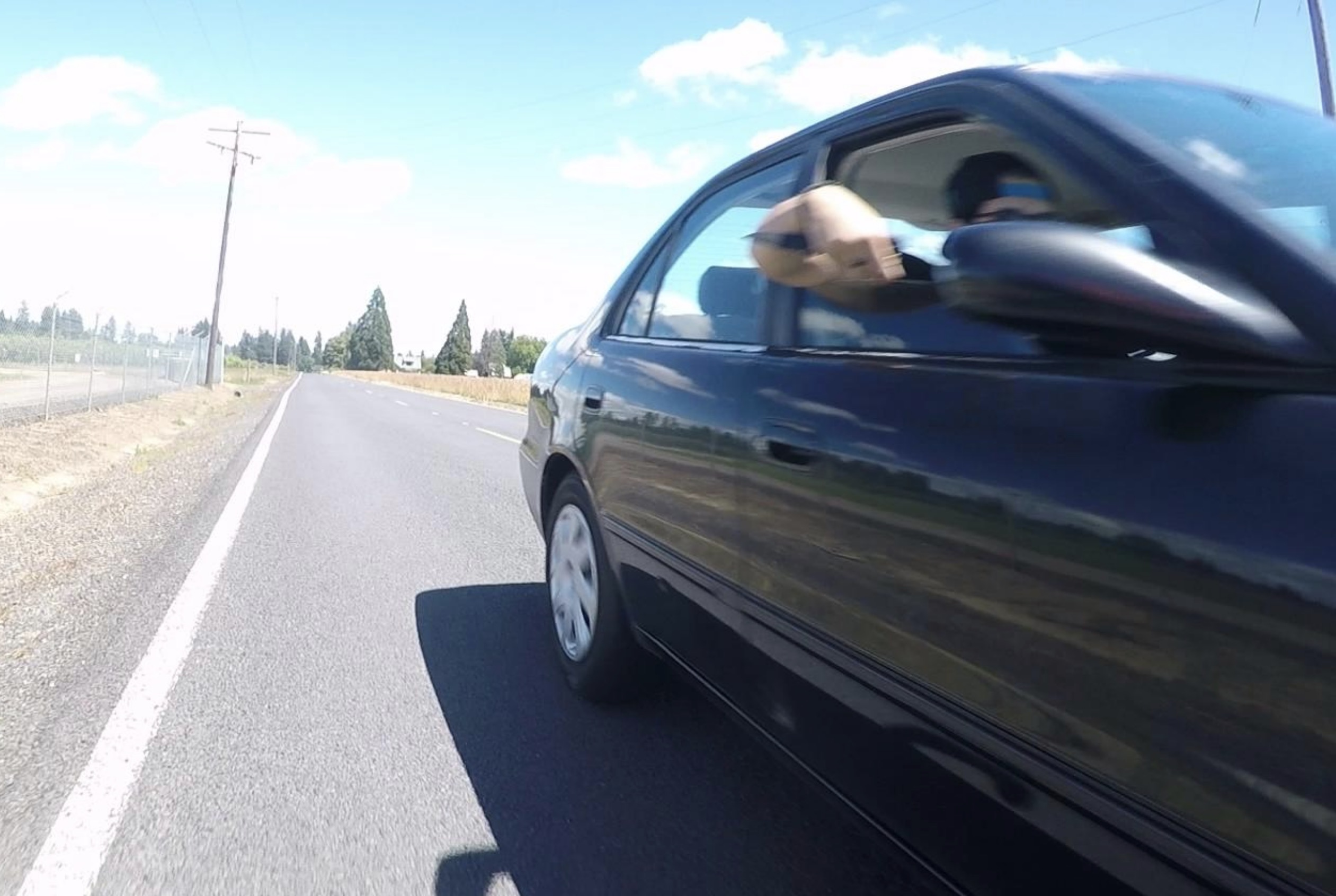 We need your help to find suspects of an attempted assault and dangerous pass in Washington County that happened this past Saturday (6/22). 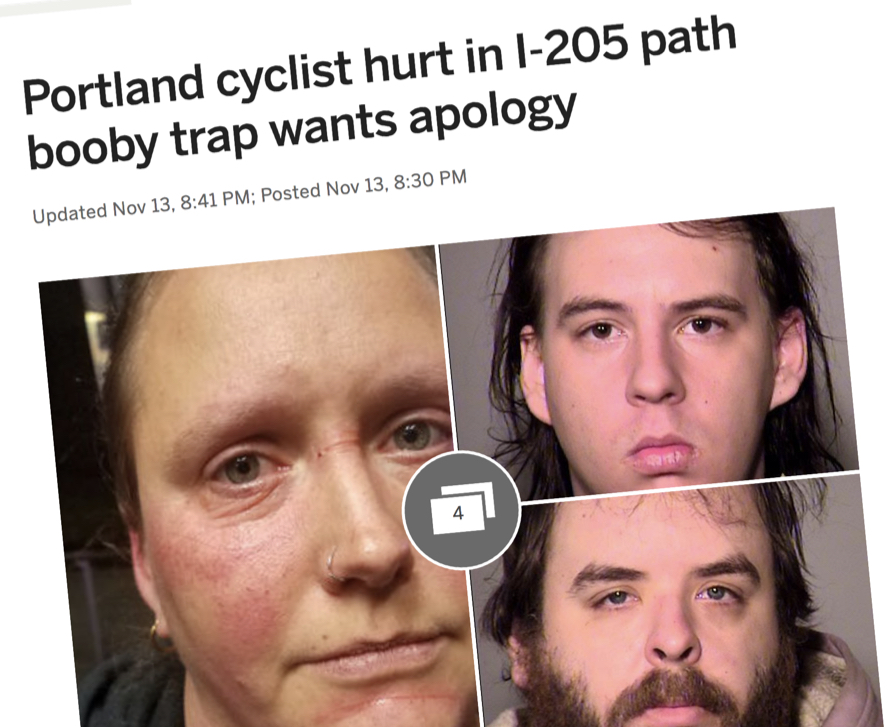 Two of the three men arrested last week for stretching string across the I-205 bike path are set to make their first appearance in court today.

On Friday, November 9th, Portlander Carlene Ostedegaard was riding home from work on the path just south of the Division Street MAX station when she pedaled into what Portland Police described as a “booby trap.” She suffered laceration injuries on her face.

DA’s Office Communications Director Brent Weisberg says following the investigation one of the men, Dakota Murphy, was issued a “no complaint”. The other two, Jones and Tolman-Duran, have been re-booked into the Multnomah County Detention Center and are now charged with one count each of felony assault in the third degree. Their initial booking was for misdemeanor assault.