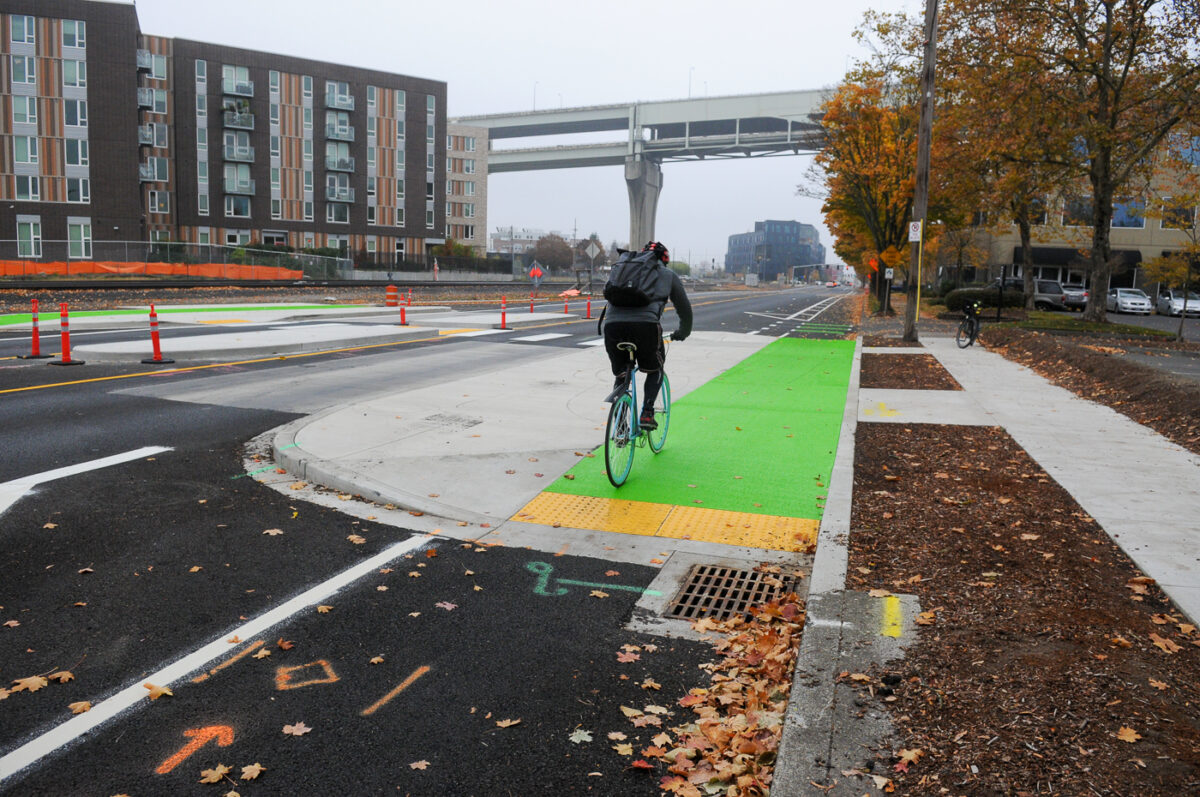 The Portland Bureau of Transportation is very busy right now. In my 15 years covering the agency, I’ve never seen them so flush with cash or have so many projects going on all at once. The combination of new funding sources at the state (House Bill 2017) and local (Fixing our Streets gas tax increase, $50 million “Build Portland” fund) levels, combined with dozens of real estate development projects (that come with System Development Charges and Local Improvement Districts) has led to a dizzying array of changes to streets citywide.

I rode around the central city Monday morning to take a closer look at several of them. I observed and photographed in-progress and completed infrastructure updates on: North Rosa Parks Way, North Vancouver and Fremont, Northwest Front, Northwest Thurman and 20th, West Burnside at 18th/19th, Southwest Main, the Burnside Bridge, Northeast Grand, and North Greeley. Here’s what I saw: 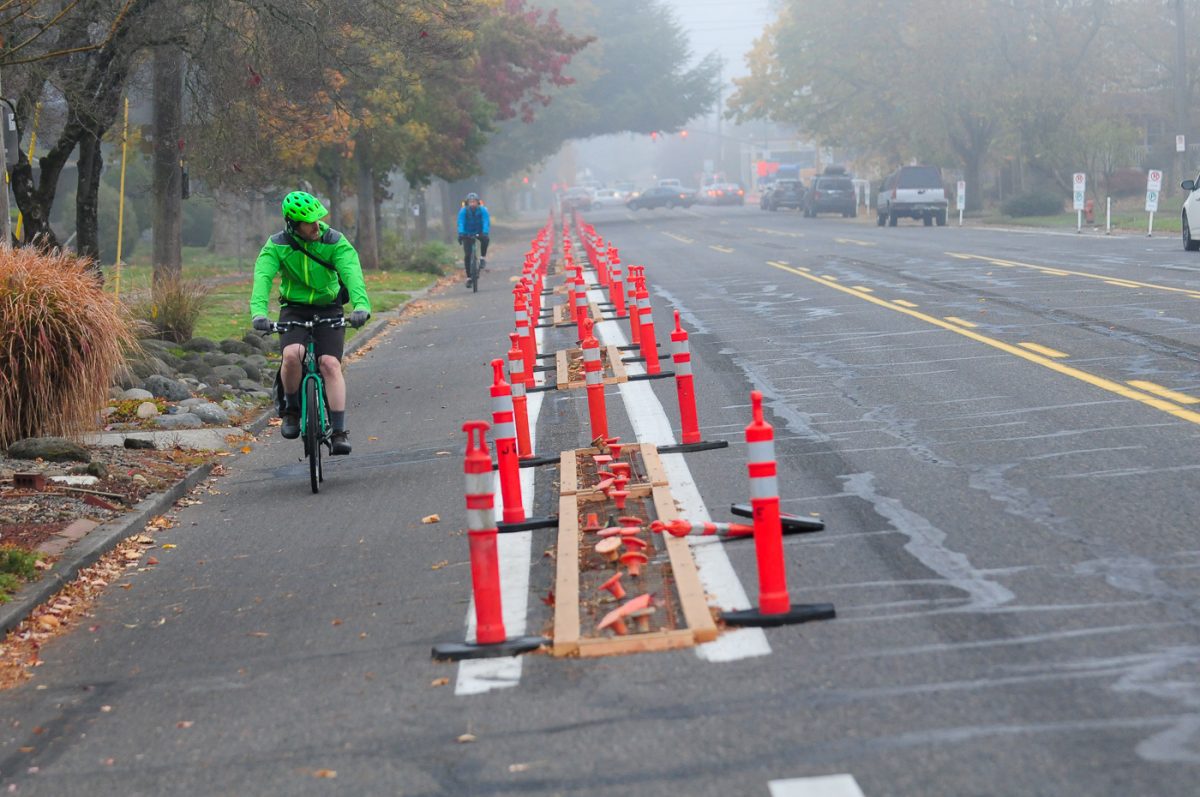 The concrete curbs we’ve waited on for over a year are finally coming. PBOT has installed the forms for the curbs on the north side of the street between NE Martin Luther King Jr. Blvd and Williams. There are stencils painted in other locations. This will be a major upgrade to the existing bikeway that was installed with plastic delineator wands at only a few conflict points.

Once PBOT is done with this we will the new curbs at ever section between MLK and Willamette — except where there are turning lanes, bus stops, driveways, and parking spots (only a few spots curbside at Arbor Lodge Coffee). The other gaping, unprotected hole in this bikeway will be the overpass of I-5. Why? Because ODOT prioritizes auto users over everything else. Not only have they narrowed the bike lane PBOT recently put in, but they won’t let PBOT install the curbs on their right-of-way.

Further west on Rosa Parks PBOT has installed plastic curbs and plastic delineator wands at the curve onto Willamette Blvd. This location was highlighted in a #RedCupProject event organized by Sam Balto and Reed Buterbaugh back in April because so many drivers dive into the bike lane at high speeds. At first look, the new curbs are doing an amazing job of slowing people down. Let’s see how long it takes before 1) all the wands are destroyed and/or 2) PBOT gets so many complaints they remove them.

PBOT has finished a lane re-striping project on two blocks of Vancouver north of Fremont. This is a very busy bicycling route in a fast-growing part of the city. As I shared last month, it’s very heartening to see bike lanes get wider as an area gets more crowded. The new bikeway between N Beech and Cook give bicycle users more room to operate. The green coloring approaching Fremont defines the cycling space and there’s a new bike box at the intersection.

Unfortunately, south of Fremont the stress ratchets back up as the dreaded weave has yet to be solved. This morning I saw a very dangerous double-weave situation when someone tried to drive eastward across bike traffic at the same moment someone cut over to make the right turn at Cook. We need safe, protected bikeways along the entire Vancouver/Williams couplet! This is a cycling arterial that should be treated with as much respect as we treat driving-centric couplets like MLK/Grand.

We finally have bike lanes on NW Front between 15th and 9th! As I previewed at last month, this gap between two dense parts of the city is now fully closed with the addition of bike lanes in both directions. There’s no physical protection on the bike lanes except for where they go behind transit stops outside an office complex about halfway between the two streets. 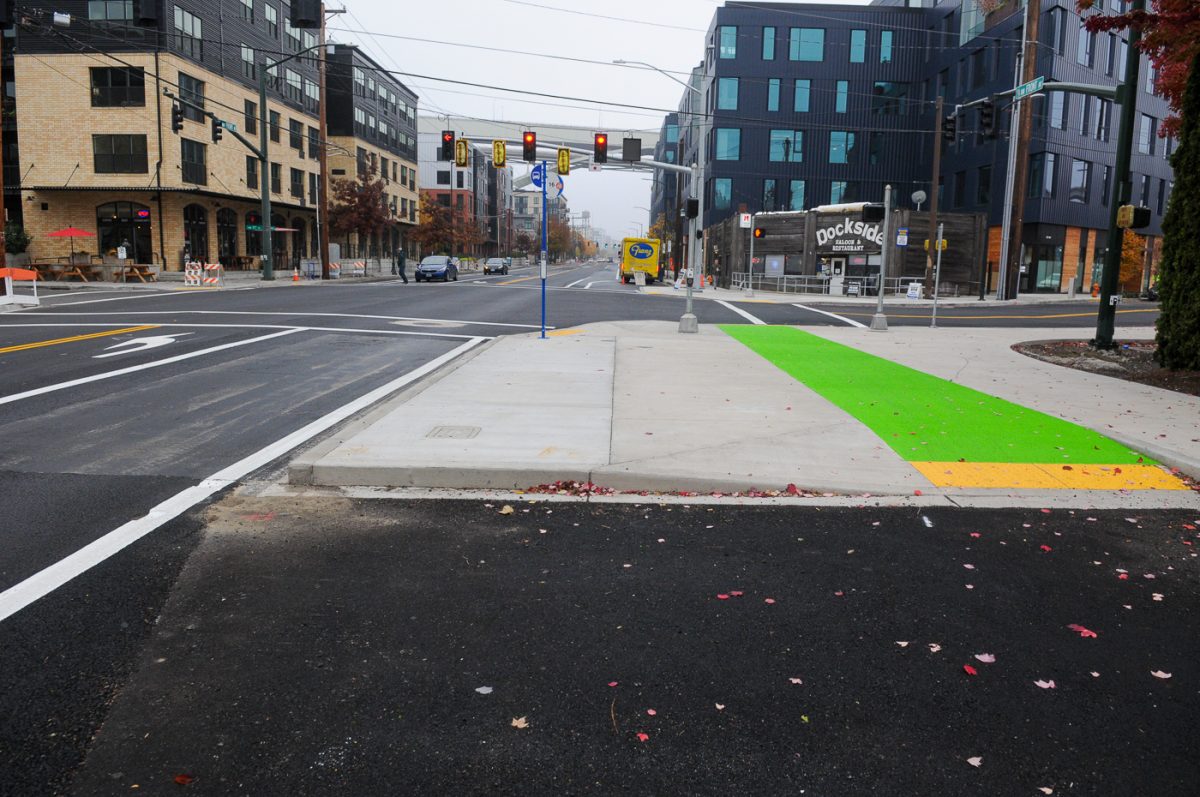 New curb extension and transit island with bike lane behind it at NW 17th. 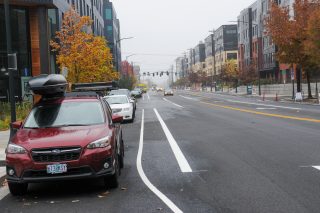 Not sure what’s going on with the bikeway between 17th and 15th.

North of 15th, PBOT hasn’t finished striping bike lanes outside of the new Field office building (you might recall the owner of that building ponied up for their own Biketown station in 2018). At NW 17th and Front PBOT has installed a large curb extension which doubles as a transit island and has the bike lane running behind it. Hopefully PBOT figures out the striping outside the Field Office building soon so we have a continuous (mostly high-quality) bikeway between NW 17th and the Hawthorne Bridge.

Portland’s first protected intersection is in progress at NW Thurman and 20th. 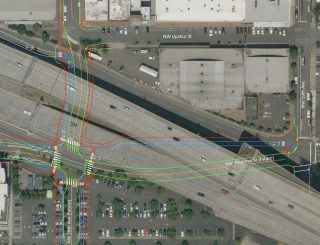 It’s part of a $7.5 Local Improvement District (LID) project paid for by private companies that are redeveloping the area. In order to connect Slabtown to the NW Industrial district, PBOT has extended NW 20th under the I-405 viaduct, and turned NW Thurman into one, two-way street 19th and 20th on the south side of I-405 (closing the northern section of Thurman which used to be a freeway on-ramp). In addition to the protected intersection, PBOT is building new bike paths throughout the blocks that will improve connectivity in this growing area of the city.

One concern I have is that the biking and walking paths are the same color and material. I hope there’s some way of defining the spaces so the bicycling area can be used efficiently and safely. (UPDATE: A reader below shares that the bikeways will be colored green. That’s good news.) I’m very eager to see how this works out once it’s all complete.

PBOT is slowly but surely making progress on their West Burnside Multimodal Safety Project. The goal is to make this tricky set of intersections safer and more appealing to all users. This project has been baking for nearly four years now and last time we checked in it was supposed to be done last fall. Most of the work is completed, but it’s not quite ready for prime time.

Our much-ballyhooed, first-ever red bus-only lane at SW Main between 1st and 2nd isn’t really that big of a deal. As part of an “experiment” with red transit lanes, PBOT has simply added red to a half-block area that was already “Bus Only”. During my observations this morning, it appeared to be working as intended. From a biking perspective, SW Main is still way more stressful than it should be. Drivers and bus operators both merge across the bike lane prior to 2nd Avenue and at 3rd bicycle users are dumped into a shared environment around the Elk Statue. Hopefully someday we can build a floating transit island, prohibit right turns at 2nd, and redistribute right-of-way west of 3rd from auto users to bicycle and bus operators.

Multnomah County is finally done with a major bridge maintenance project. Before the bridge re-opened they partnered with PBOT to re-stripe the lanes in order to speed up bus service and improve conditions for bicycle users. Thanks to a nudge by advocacy groups, the County decided to install plastic wands in the newly buffered bike lanes.

The bus-only lane (which is only in the eastbound direction) wasn’t operational this morning, but I imagine it’ll be open soon. The County confirmed with me today that all the plastic wands will be installed by the end of this week. This means eastbound bicycling will feel much better once everything is installed and open. That’s because bicycle riders will only have to contend with professional bus operators in the adjacent lane and they’ll have a wider bike lane with plastic wands in the buffer.

Westbound won’t feel as comfortable because bicycle users will still have automobile users in the adjacent lane and will only be separated by plastic wands. 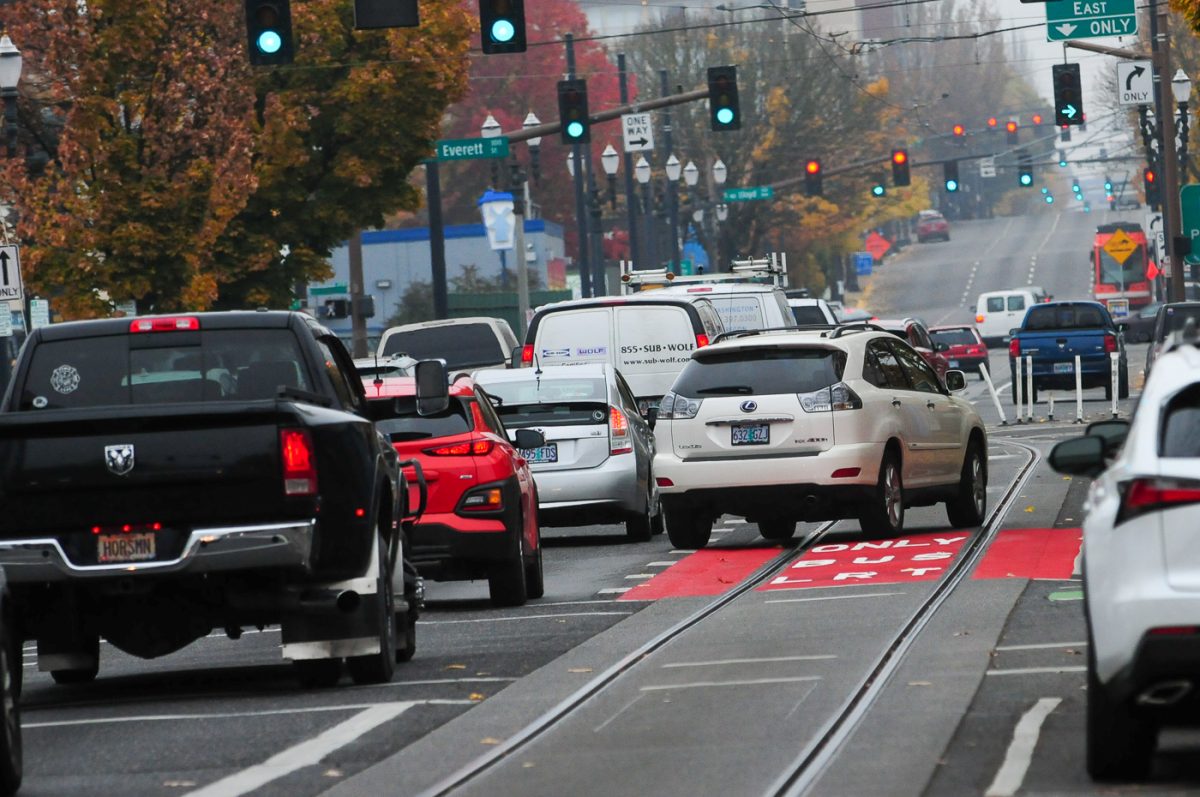 This image shows just how little red paint there actually is in this driving-centric area.

In addition to SW Main, PBOT is adding red paint to transit lanes on NE Grand and MLK. Similar to Main, they’ve laid down a very tiny chunk of red. On Grand it seems to be helping, although I did see people so eager to get on I-84 that they couldn’t resist driving over it this morning. I’ve asked PBOT if bicycle users are permitted to ride over the red lanes on Grand. While it doesn’t see a lot of bicycle traffic because of the streetcar tracks and very stressful environment, there’s no other place to ride. I’ll update this post when I hear back.

A few weeks ago PBOT started their project to build a two-way bike path on the east side of Greeley between Going and Interstate. So far the excavation of the shoulder has started and the bike-only signal heads at Going are up but not yet operational.

I found the work zone plan to be very inadequate and potentially dangerous. While PBOT announced a detour for bicycle users, it’s not well-signed. I got all the way to Greeley and didn’t realize the bike lane was closed. Construction forced me even closer to other road users who were traveling very fast in heavy vehicles capable of killing me. PBOT decided to close the bike lane, yet maintain all lanes for drivers. I hope everyone uses caution until the new bike paths are finished in February 2020.

For more on projects underway from the City of Portland, check their website. If you see changes on streets near you, please drop me a line. It’s impossible to track everything so I rely on you for help!