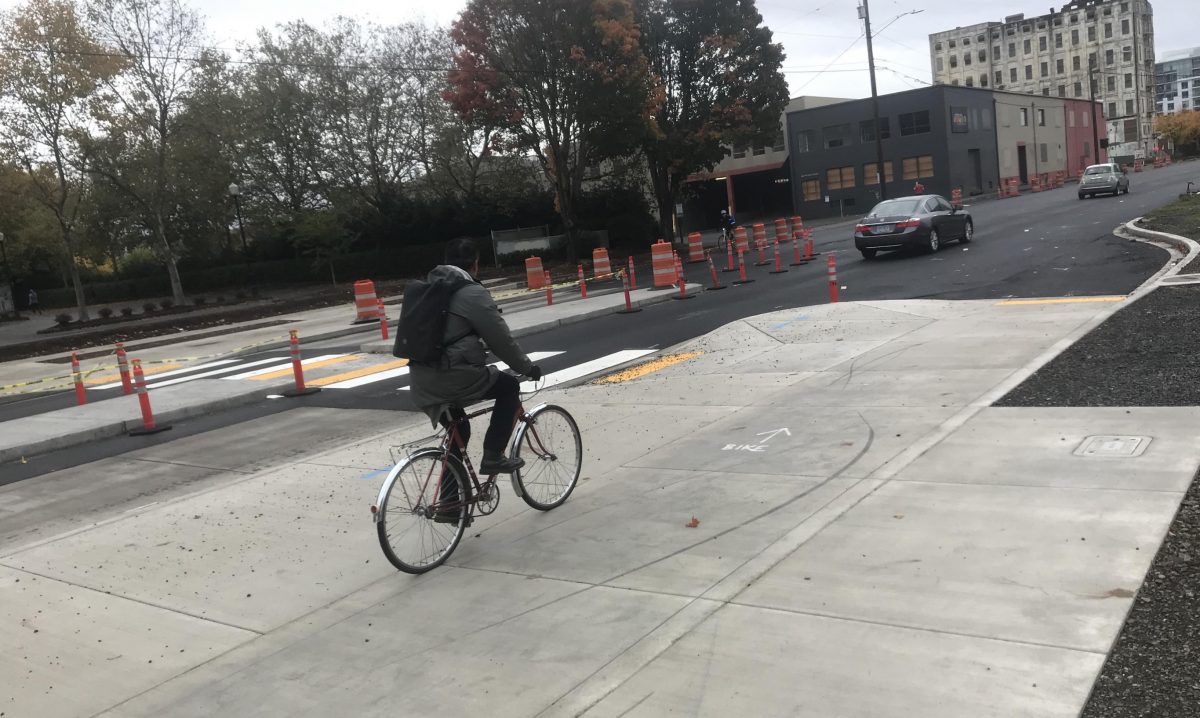 A major gap in our central city cycling network is about to be filled. For years people riding bicycles have had to share lanes on NW Front/Naito Parkway between NW 15th and 9th where there were five wide lanes, 40 mph speed limits, and no dedicated cycling space. Now the final piece of a project that began in 2017 is close to completion and it will come with fewer driving lanes and new buffered bike lanes that will run behind updated bus stops.

As residential and commercial development on NW Front has skyrocketed in recent years, so too has the need for a safe bicycling connection on Front/Naito between the Steel Bridge, the Pearl District and the Northwest Industrial Area. PBOT added bike lanes north of 15th Avenue back in 2017 and now they’re about to fill in the gap to the south. 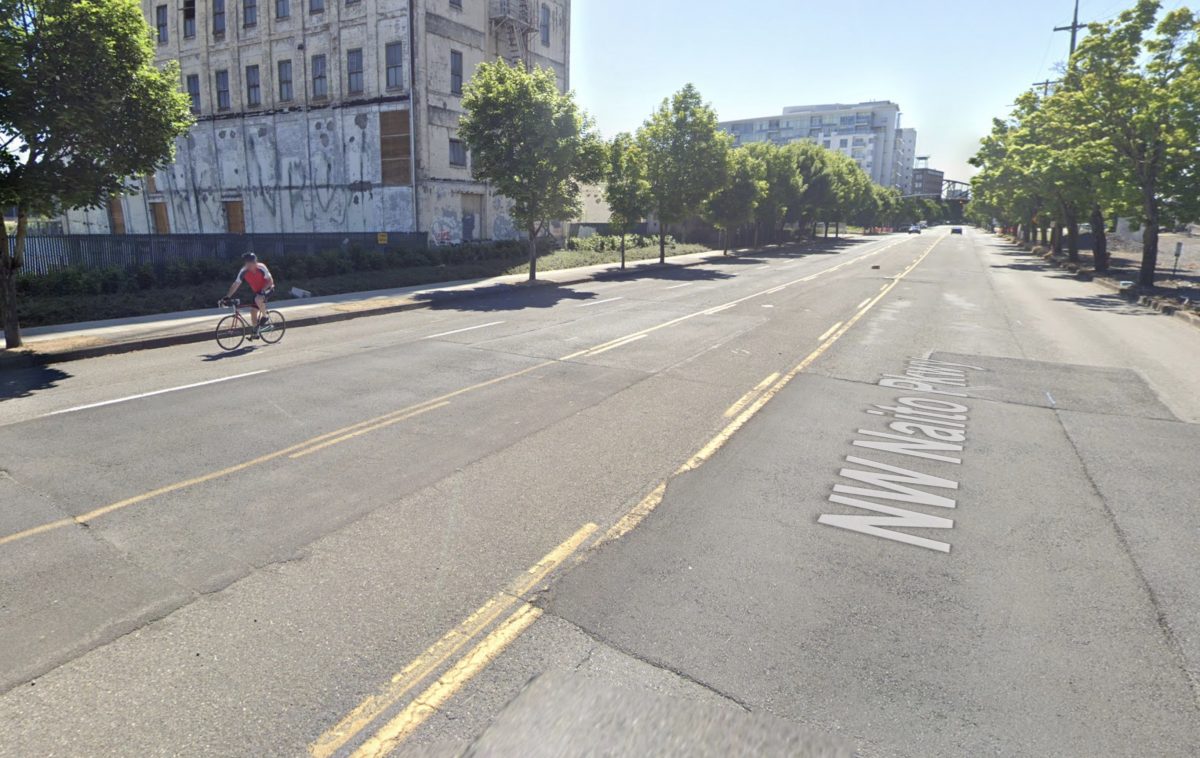 And here’s a look at the new bus stops (new lane striping isn’t done yet): 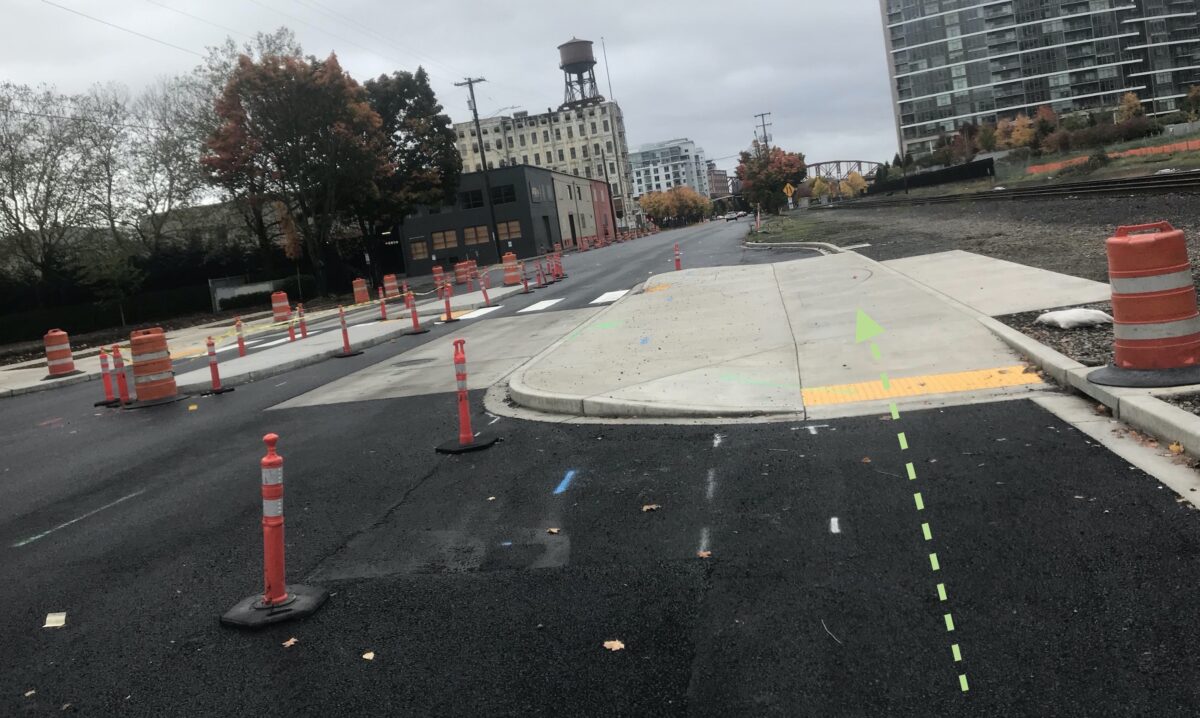 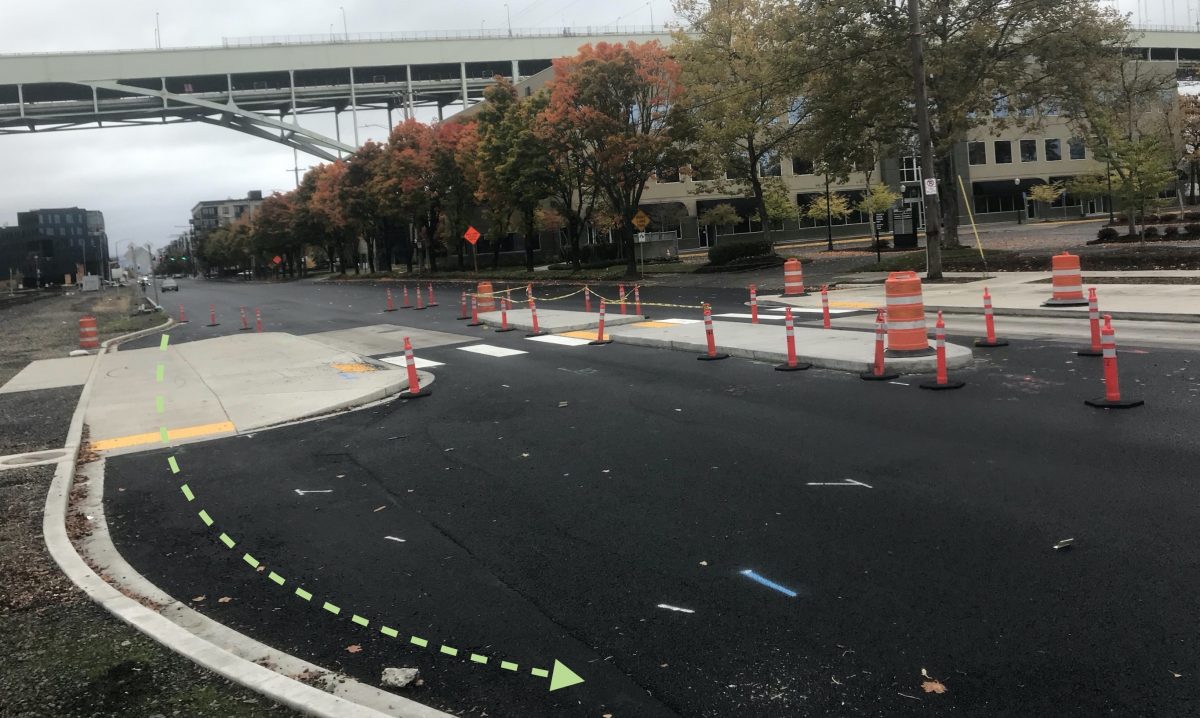 The changes come as part of the Portland Bureau of Transportation’s NW Front Avenue – Naito Parkway Local Improvement District (LID) created in March 2017 with Park Office LLC, owners of a major nearby development. They contributed $1.1 million toward the project (and received System Development Charge credits) to repave Front/Naito and improve cycling conditions.

During a ride through the area over the weekend I noticed the paving is done and preliminary striping marks are down. In addition to the new bike lanes, what really caught my eye are the new transit islands located just south of the Fremont Bridge near several large office buildings. PBOT has designed the bike lane to run behind the stops in order to avoid the “leapfrog” phenomenon where bus operators service stops at the curb and encroach into the bike lane. These new transit islands also allow bus operators to stop in the sole driving lane, so they act as traffic calming as well.

These new transit upgrades will be key if Portland is ever successful in attracting a Major League Baseball baseball team whose new stadium would be located on the riverfront along Front Avenue.

In addition to the new lane configuration, PBOT also plans to upgrade curb ramps and partially rebuild traffic signals at 9th, 15th and 17th avenues. The project is likely to be fully completed before the start of winter. I’ve asked PBOT whether or not the bike lanes will be protected and when we can expect the project to be finished. I’ll update this post when I hear back. Also stay tuned for full photo recap once everything is done.

UPDATE, 4:49 pm: Here’s what PBOT says about the bike lane design and schedule:

Bike lanes on either side of NW Front Ave will be 7’ wide with a 3’ buffer from NW 9th to NW 17th. From NW 17th to a little north of NW 18th, the bike lanes will be 6’ wide with a 3’ buffer. The buffers will include surface mounted tubular markers spaced approx. 20’ apart for the majority of the project and will be parking protected in a few spots.

With the clear weather window that we have this weekend, contractors will be doing the long line striping (centerlines, bike lanes and buffers) between Friday and Tuesday. We’ll have more information on the rest of the striping schedule after a meeting with the contractor later this week.