What began as a straightforward repaving project is now one of Portland’s best protected lanes. In the past two weeks, the Bureau of Transportation has finished restriping North Rosa Parks way between Willamette Blvd. and Martin Luther King Jr. Blvd. This means it’s now possible to bike (or scoot!) in a wide curbside lane that has some form of separation from drivers on 3.5 linear miles of this important east-west neighborhood street.

“I think it’s going to look great. These [curbs] will look better and will protect the bike lane more than plastic wands.”
— Scott Cohen, PBOT

Back in June we shared concerns that this project was languishing as three sections remained untouched and some of the promised elements had not been installed. With the striping complete, we talked to PBOT yesterday to learn more about what’s left to come. We asked specifically about three things: the sections still not physically protected (paint doesn’t count, even if it’s buffered); promised bus islands at the Albina intersection; and the latest on the N Villard median and enhanced crossing.

PBOT Project Manager Scott Cohen had mixed news about the bus island. As reported earlier today, the good news is that the City plans to test a promising modular platform product at Albina and several other locations citywide. The bad news is that it won’t be on the ground until spring of 2019. Until then, this protected lane will be vulnerable to bus operators who drive into the lane to service curbside stops. Once the new platforms are installed, bus drivers will stop in the standard travel lane (in the roadway) and people using the curbside lane will be able to continue through without stopping behind a bus (unless passengers are present of course).

As for Villard, PBOT has decided to pull back on earlier plans to create a full median that would have limited some turning movements by drivers on this very popular cut-through street. A partial median that will come with a newly painted crosswalk and make it safer for everyone to cross is in the process of being designed and its installation is imminent. Asked why the more robust option won’t be built, Cohen said PBOT has plans for other median diverters in the neighborhood (a full diverter has already been installed on Greeley at Willamette) and they, “Need to look at how neighborhood traffic patters will work holistically.” In other words, PBOT’s approach is to go light on diversion until they see what impact other changes might make to driving patterns. If cut-throughs at Villard remain an issue, “It’s really easy to come back later and fill it in,” Cohen said. 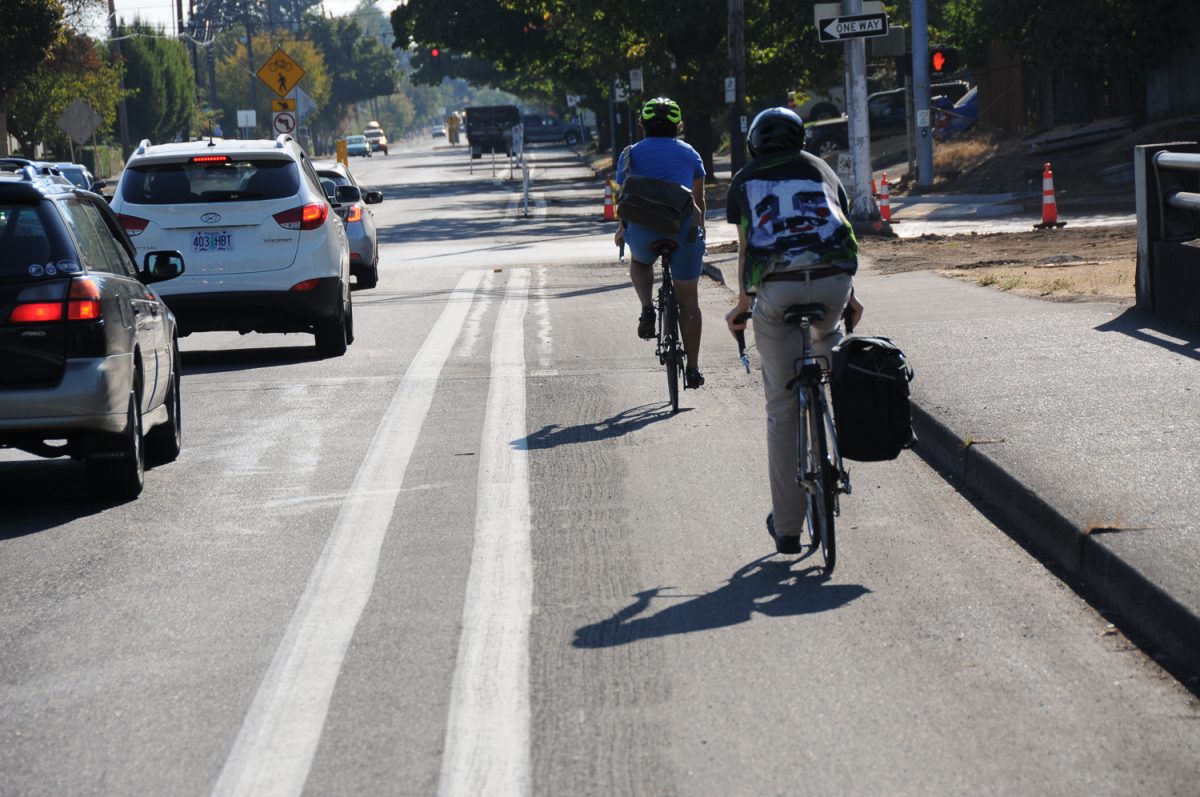 And I’ve saved the best news for last: PBOT is going to add concrete curbs as a protective measure.

According to Cohen, they heard from residents that the white, plastic, delineator wands don’t jibe with their vision for making Rosa Parks look and feel like a neighborhood street. Local neighborhood associations asked PBOT to go back to the drawing board and find additional funding for a different type of protective material. Cohen said they found the money and the new plan is to install concrete traffic separators. The curbs will be the same design as the ones used on North Lombard in St. Johns that we reported about earlier this month (in photo above).

“I think it’s going to look great,” Cohen said. “These [curbs] will look better and will protect the bike lane more than plastic wands.”

Asked if the entire project will have some form of physical protection, Cohen said yes. Except for intersections, driveways, a small section near a parking cut-out in front of Arbor Lodge Coffee, and the I-5 overpass (which is managed by ODOT), Cohen promised that the entire length of the lane would be protected by either plastic wands or concrete curbs. Overall, he estimated Rosa Parks will be about 70/30 curbs/wands once the project is fully complete. And that’s the only rub with this news. Because the curbs are still new to PBOT, they aren’t stocked by the maintenance crews and the work will have to be contracted out, leading to a delay. Cohen says they’ll install the curbs in spring of next year.

There is such a massive difference between plastic wands and those concrete curbs. I hope the latter becomes the standard for protected lanes moving forward, and PBOT sets aside funding (maybe from the Vision Zero fund?) for their implementation anywhere else that is currently protected by wands.

Hopefully this is the beginning of the end of PBOT’s failed experiment with plastic wands.

Totally agree! It would be great to know how much they cost. I was also wondering whether one could fill up the road between the two curbs such that the bike lane is higher than the road.

Gary B
Reply to  paikiala

TLhnksa aikiala. pooks like spacing on the wands is about 20 ft? So that’s $400+labor for the curb versus $125+labor for the wand in the same space. Not an insignificant difference, but I’d say worthwhile. Especially with presumably reduced maintenance/repairs.

Gary B
Reply to  Gary B

Sorry, *thanks paikiala, looks like…* (My computer is literally scrambling letters on me. It’s the strangest thing.)

paikiala
Reply to  Gary B

I guess, if you consider 3x the cost not significant with public tax dollars.
Not a fan of only comparing construction costs. Prefer life-cycle costing: price to get + cost to own – benefit achieved (costs avoided) for owners (tax payers and users).

Plastic wands are not entirely ineffectual, and certainly do more than paint. An eyesore for the short lifespan of a plastic wand is well worth the wait until the city can afford concrete physical separation. I will take toilet plungers over paint if it keeps me alive.

“Protection” that physically confines cyclists to a narrow, uncleanable, debris filled area alongside the curb is a mixed blessing. It sure does make right hooks a lot more likely, based on my first hand experience on this very street.

The curb-delineated cycle track pictured in the article will fit a standard street sweeper.

And we have access to a narrow street sweeper for the lanes that don’t fit a normal size one.

“Cohen said they found the money” — sounds like a treasure hunt! 😉 I wonder where they found it?

It’s part of the fun of budget allocation. Somebody says we have no money and somebody else points to a budget that can be tapped.

Usually they just grab what hasn’t been spent yet in East Portland, which tends to be most of the funding but none of the implementation.

whoa. that curb looks awesome. i use this route fairly regularly, and have started using it with my kids. super happy that it’s finally getting completed… and did i mention how awesome that curb was?

Middle of The Road Guy

I’m glad they listened and figured out that their first attempt was pretty poor from a design standpoint.

I wish they’d work on their un-intuitive signage, next.

“This is the type of curb that’s coming to Rosa Parks Way.”

I’d like to think you’re talking about the actual curb on the left with the steep facing and not the speed bump to the right with ramps up it on both sides, but I know it’s not true.

That curb is not protection. It’s a convenience to motorist’s tires and wheels and an inconvenience to cyclists navigating in a narrow lane.

‘Separation’, ‘protection’, ‘barrier’ are imprecise terms. I liken them to ‘filters’ with a spectrum of effectiveness. Some ‘filters’, like a wire mesh, let through a lot, while others, .1 micron filters, let through very little.
If a bike lane line is at zero and a bike only trail 20 feet from the road, with a jersey barrier or guard rail between is 100, then delineators are something more than nothing (1?), and the traffic separator curb (official name) are even more (5?). Raised bike lanes could be 10.
I agree that ‘protected bike lane’ is misused.

Curbs like this have some cons: debris removal, obstruction, visibility, passing. The “protected bike lane at any cost” mentality of installing hard-scaped buffers for long stretches of bike lanes does have some negative aspects. I wonder if the city have considered and have a plan to deal with the negative aspects of these curbs.

What plan does the city have for removing debris accumulation in these curbed-in bike lanes? This special sweeping operation will need special planning and scheduling, equipment, from the maintenance group – has this been obtained?

Will these curbs have reflective material to encourage night-time visibility so people on bikes (and scooters) don’t crash into them?

How wide will these new lanes be, curb to curb inner dimension, on average through the section? Will there be room to pass a wide bike, such as a cargo bike or bike hauling a trailer?

What plan does the city have to keep garbage/recycling bins out of these lanes?

“The work will have to be contracted out, leading to a delay.”

I’m getting very suspicious of this contracting issue. It’s the same reason why Greeley is pushed back another year. The point of Oregon Revised Statute 279C.305, “Least-cost policy for public improvements.” is that if a contracting agency can do it cheaper then the city has to contract it out.

I suppose city workers = mandated benefits which makes cost of labor too high to actually use. (I mean this is really just manual labor we’re talking about here for the most part, right?) Bureaucracy at its finest. Maybe I’m misunderstanding it all. But, I have a feeling we’re in store for an “Oops we’ve got too much work for our approved contractors to do. But don’t worry there’s always 2020.”

It depends on many factors. Some projects are beyond the ability of current city forces to complete because of current regular maintenance work load. Some projects are just much too large even if city forces had nothing else to do. And some require specialty equipment it might take the city a year to acquire.
Contractors for city work have to meet minimum State pay schedules for city work – level playing field, etc. And the contracting process is not simple either.

What is being proposed for preventing distracted or really stupid drivers with no common sense from using this curb-protected lane as an HOV lane?

Other than bike lane symbols, and green lane markings?

Correct. Will they be adding periodic bollards to prevent dumb or obnoxious drivers from using the double-wide bike lanes as parking, loading, or passing lanes?

Are they going to fix the parking signs that have arrows pointing cars to park in the wrong area (the bike lane itself!)?