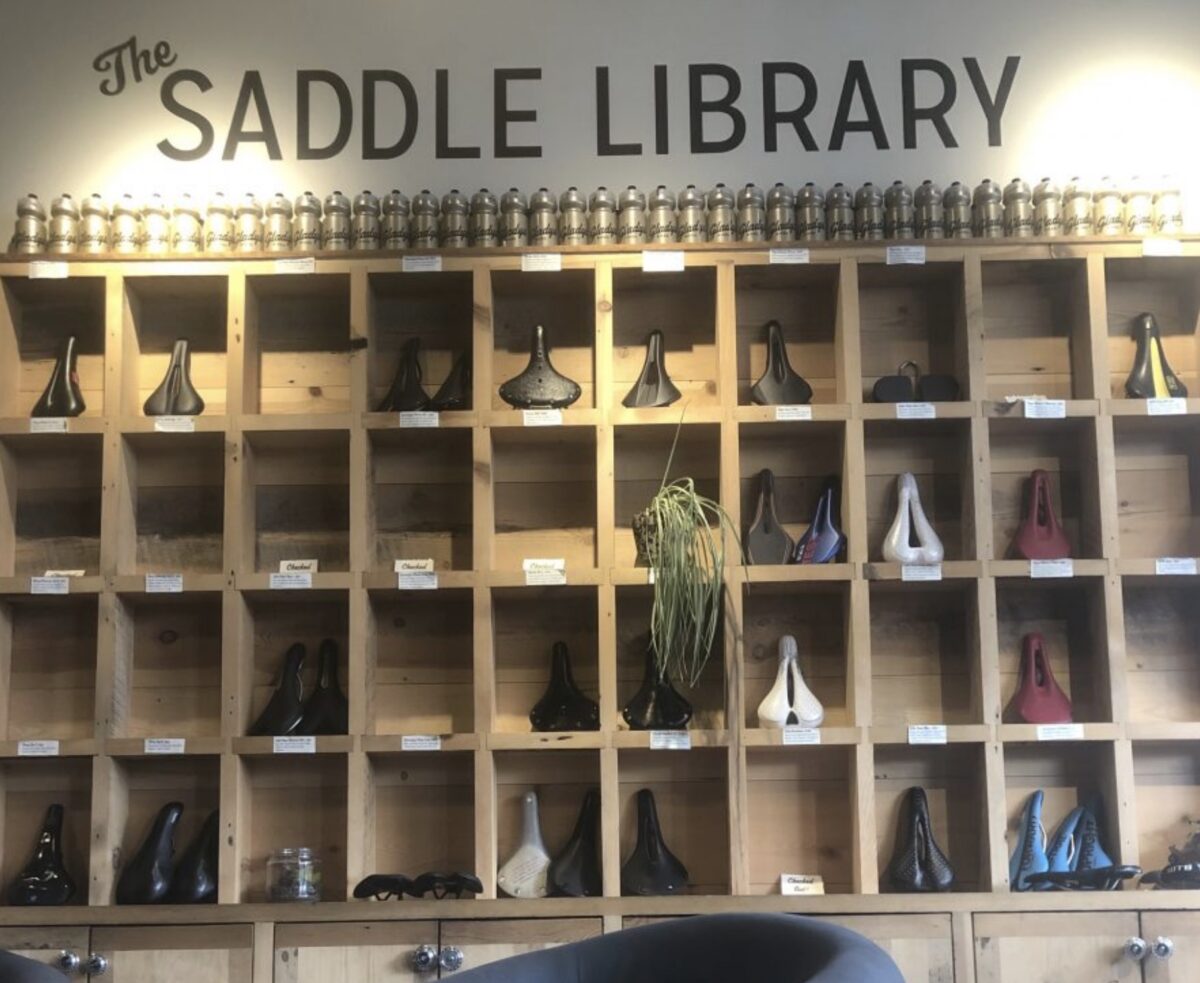 I’m not going to beat around the bush: The Gladys Bikes Saddle Library will change your life!

Last fall my saddle went out of adjustment. Then it broke. I’m indecisive and don’t like change. I tweaked my saddle alignment for months, so I was grumpy when it died. But I was ecstatic to finally have an excuse to use the Gladys Bikes Saddle Library, a phenomenon that has intrigued me for years. (BikePortland first covered it six years ago, so I figured it was time for a refresh.)

What is a saddle library you ask? Here’s how it works (from to their website):

Step 1: Come into the shop and talk with our knowledgeable staff about your saddle needs and concerns. We’ll make recommendations about which saddle(s) might be a good match for you.

Step 2: For a down payment of $25 you get a Library Card, which gives you unlimited access to check out any of the saddles in our loaning library. For each saddle you check out you get one week try it out on your bike. If you decide to purchase one of the saddles you’ve tried, your $25 goes straight towards the price of the saddle.

Step 3: Take the saddle home with you. Go on a typical ride. Then go on another one. Maybe one more for good measure. How does it feel? Decide if it’s the saddle of your dreams.

Step 4: Dream saddle? Bring the test saddle back in and we’ll trade it out for a brand new one. Not a love match? We’ll get you set up with different saddles for you to take home and try out until you find your saddle soulmate. 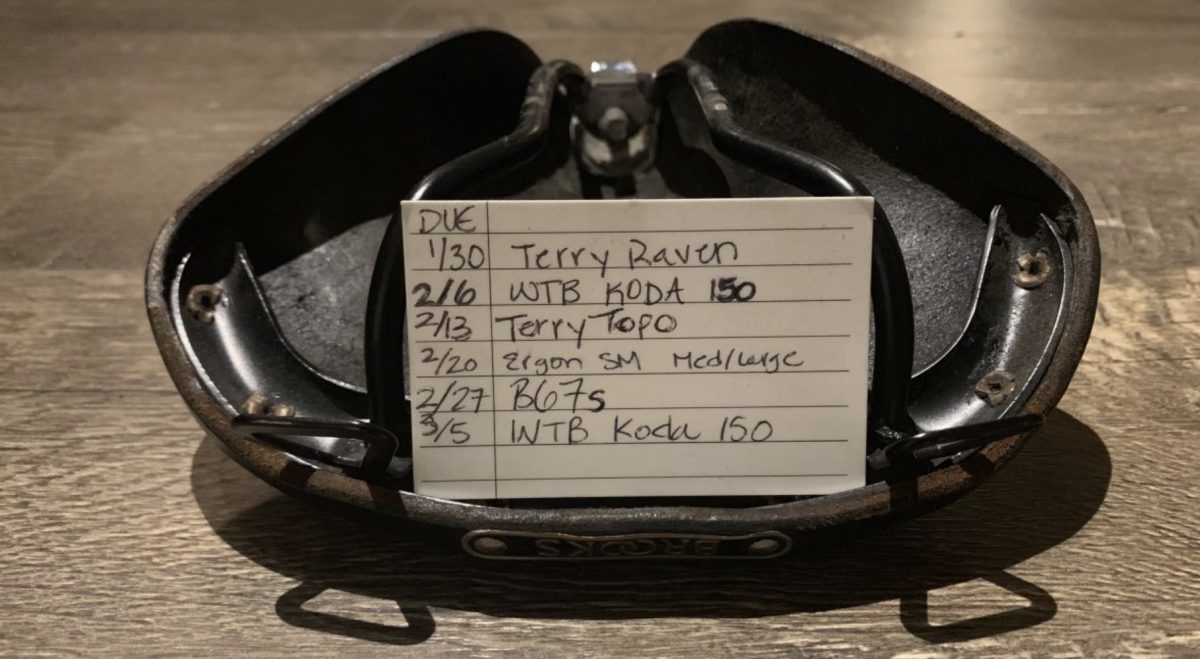 My Saddle Library card resting on my broken Brooks B68 S (both of which I intend to frame and hang on the wall).

It’s saddle-trying season
The “slow season” is upon us: bike lanes and multi-use paths are less congested as fair-weather riders have gone into hibernation (i.e. switched to using transit or driving) until spring and bike shops have switched to winter hours and might be running winter specials.

If you’ve given birth and your saddle never felt quite right since, perhaps it’s time to find a new perch.

Perhaps, like me, you need good reasons to get out in the fresh air during these cold months. I find myself biking less between November and March. I still bike everywhere I go, but I combine or completely put off errands and other trips. My mileage drops way down…and so does my mood. I hoped the job of testing saddles would getting me riding extra every day, but the cold temps got the best of me and I only spent time with each saddle riding to and from the shop each week. Fortunately, that’s plenty of testing. I live eight miles from Gladys, which I consider a long distance to run an errand, but a much shorter ride would yield sufficient saddle feedback if you don’t live as far away.

Most importantly, the slow season means fewer people are using the Saddle Library so you can pick through the saddles more easily.

Why is this so great for moms?
The Saddle Library is for everyone, but since this is a family biking column, I’d especially recommend it to people who have given birth. Our bodies change after pregnancy. I remember reading a book that promised everything about my body would quickly return to normal except maybe the appearance of my belly button. That didn’t sound too bad. Unfortunately it’s not true!

During pregnancy, the hormone relaxin relaxes ligaments and bones. It’s useful for letting rib cages stretch and somewhat accommodate that baby butt wedged in your ribs from weeks 35-41 (grr!) and for pelvises to form efficient birth canals. But relaxin can’t pinpoint just the baby-related ligaments and bones so pregnant people are prone to dropping things thanks to relaxed hand ligaments and those loosened and spread out feet bones sometimes don’t revert back — my feet are a half size bigger now. Same goes for hips and sit bones. If you’ve given birth and your saddle never felt quite right since, perhaps it’s time to find a new perch.

Quick lament about the Brooks B68 S

This wasn’t just any saddle, it was the last Brooks B68 S in the world.

My story is about both a saddle that stopped working for my butt and about replacing a discontinued model. It was the Brooks B68 S on my “me” bike. A “me” bike is the non-kid-toting bike of a family biker who owns more than one bike. My “me” bike is a Surly Straggler with swept-back handlebars for comfortable upright city riding. And it’s not strictly a “me” bike: the rear rack is a Burley Moose rack for pulling a Burly Piccolo trailer bike, plus I use this bike to pull my 5-foot by 2-foot cargo trailer — sometimes with my two kids as the cargo. I love this bike almost as much as my cargo bike, however my saddle got out of adjustment after lending the bike out. Try as I might I couldn’t get it to feel right again. I began loathing the bike, miserable every time I rode it. Then the saddle broke. A metal rail snapped when I was far from home trying to fine-tune its angle every few blocks.

This wasn’t just any saddle, it was the last Brooks B68 S in the world. When I got my cargo bike eight years ago I asked around and the general consensus was that mom butts fit best on the B68 S. So I got one and agreed. That eight-year-old saddle was the one on my “me” bike — a few years ago I got the sprung version, the B67 S, (and there’s one in the Saddle Library!) to put on my cargo bike so I could transfer the B68 S to my “me” bike. I considered just getting another B67 S, but I wanted to find something without the creaky springs and finding a new favorite saddle that wasn’t extinct via the Saddle Library seemed like a smarter move than combing the internet for a used B68 S.

Any discussion of bike saddles has to start with the disclaimer that every butt is different. While I’ll share the names of saddles, there’s every chance you’ll love one I disliked and not find my new favorite a comfortable cushion for your own bike. 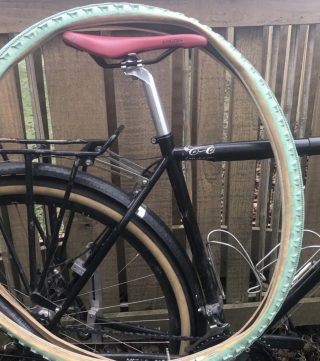 Look at all that color! I switched to knobby green tires this summer and they looked neat with the red Ergon saddle.

As mentioned at the top of this post, I don’t like change and I’m very indecisive. I toyed with the idea of easing into Saddle Library patronage by paying my $25 to enroll and commit, but not actually check a saddle out for a week or two. Fortunately Leah Benson, owner of Gladys Bikes, convinced me to dive right in. None of the wider saddles Leah thought I might like best were available so I checked out a narrow version of one she thought I’d probably like. Have I mentioned every butt is different? Because they are. For me and just for me, I like the stock narrow saddle on my old road bike with drop bars and wider saddles on my more upright cargo bike and “me” bike.

I didn’t like that first saddle, the narrow Terry Raven, on my “me” bike, but I filed it away to try in the event my road bike’s saddle breaks. By my second visit the wide saddles had been returned to the library so I checked out the WTB Koda 150. I deemed it too ornate with its shiny decoration, but it was comfortable enough. I exchanged that a week later for the wider Terry Topo. I liked how this one looked, but it felt too soft. Next up was a peppy red Ergon SM M/L. I really wanted the red one to work because it was so peppy! But it really didn’t fit my butt. I was interested in choosing a saddle for comfort, not for appearance, but it’s hard not to get excited about a pretty bike part. If a snazzy saddle or pretty panniers make you more eager to ride your bike, why not get them over something less engaging?

Each Wednesday afternoon I parked my “me” bike after riding home from Gladys and hopped onto the worn-in B67 S on my cargo bike to meet my kids at school and felt more despondent.

Leah was willing for me to try every saddle on the wall, but suggested that once a patron narrows things down to a certain width/firmness it tends to be best to stay in that realm. Everyone at Gladys Bikes really knows saddles and it’s smart to take their advice, so while I thought a time lapse video of me trying each and every saddle seemed cool (I think Leah though that idea was cool, too) I reined in my indecisiveness. I admitted to myself that the shiny WTB was pretty comfortable, but also admitted I couldn’t be sure. After all, how on earth could my second check-out have been The One?! So I checked out the B67 S for a week as a control of sorts before spending one more week with the Koda. Sure enough, it was The One. Leah also shared that many Brooks saddle lovers like the Koda, too.

In the words of Gladys Bikes’ employee Miranda, “Ultimately your butt makes the decision.” It certainly does. 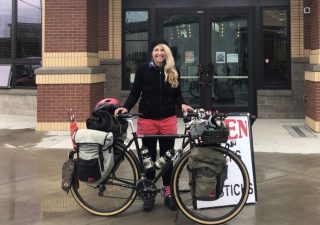 Soon-to-be sporting a blister 100 miles from home, but happy with my saddle choice.

This summer I took that new saddle to the coast, just like last year, and it was perfectly comfortable! Which means my four-day/200-mile trip to Eugene two weeks into my relationship with the new saddle that left me with a blister (not a saddle sore but a blister, which I guess is better, but still: ouch!) was no fault of the saddle’s. Side note (bottom note?): if you find yourself getting saddle sores often, it could be a sign that your saddle has worn out and you should consider patronizing the Saddle Library. Saddle sores often form where your inner thigh meets the perineum, first just as a mild skin irritation, then as inflamed hair follicles. Sometimes they can get even worse, requiring surgery if left untreated. In my book I refer to saddle sores as, “the feeling is akin to stepping on a Lego, but in a much more sensitive spot.”

Do you have a saddle story to share? Did you already know about the amazing Gladys Bikes Saddle Library? Thanks for reading!

Remember, we’re always looking for people to profile. Get in touch at madidotcom [at] gmail [dot] com if it sounds like fun to you.

— Madi Carlson, @familyride on Instagram and Twitter — Get our headlines delivered to your inbox. — Please support this independent community media outlet with a one-time contribution or monthly subscription.