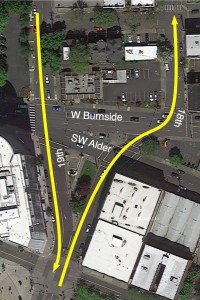 The Portland Bureau of Transportation has identified a section of West Burnside they’d like to tame; and the result could make it easier to cross the high-speed road that dangerously bisects our city.

The City’s West Burnside Multimodal Study aims to “evaluate opportunities to improve safety and accessibility along and across West Burnside Street between 15th Avenue and 20th Avenue.” We first heard about this project from a reader who saw a presentation about it from a PBOT staffer that was given at a meeting of the Northwest District Association’s transportation committee last night.

Here are more details about the project via PBOT’s website:

West Burnside Street is a major east‐west travel route through downtown Portland and connecting to the West Hills and areas to the west of the City. On an average day, between 21,000 and 25,000 vehicles use the undivided four‐lane facility to travel east or west in the blocks between Interstate 405 (I‐405) and the West Hills.


However, West Burnside Street also acts as a barrier to north‐south movement for bicyclists and pedestrians, due to crossing difficulties and a lack of facilities in some locations. Additionally, the existing configuration in the vicinity of 18th Avenue, 19th Avenue, Alder Street, and West Burnside Street is problematic in a number of ways:
– It does not allow for comfortable bicycle and pedestrian circulation;
– Vehicles and transit vehicle operations are not intuitive, and
– Vehicle speeds traveling eastbound on Alder Street are excessive. 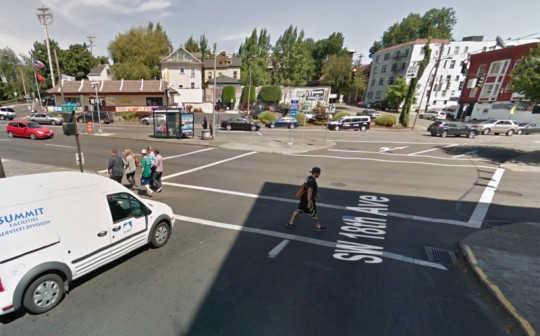 Apparently this section of Burnside has been a neighborhood priority for many years. PBOT says they’re taking action now because of a “limited time opportunity for funding” of other work on Burnside. In addition, Burnside is one of PBOT’s designated High Crash Corridors and this project will allow them to address clear and present safety issues. It’s also worth noting that the project manager, Rick Browning, is also in charge of the Central City Multimodal Plan (a.k.a. the downtown protected bike lane project) and his work on this section of Burnside will help inform that project.

Details on what type of changes PBOT is looking to make at this intersection aren’t confirmed yet. However our reader who was at the meeting says they shared plans to make walking and biking improvements to the intersection of Burnside and NW 18th/19th and Alder. “It would involve building curb extensions and extending the existing bike lanes at 18th/19th over Burnside to SW Alder. In order to make left turns from 19th to Alder possible they’re investigating a protected intersection treatment,” he said.

Keep in mind that this intersection is just north of Providence Park, a destination where thousands of Portland Timbers fans arrive for games by bike, foot or transit.

We’ll share more about this project as it develops. Stay tuned for opportunities to weigh in.

Nice! I ride that section every day.

A protected intersection!! That’s worthy of two exclamation points. If designed well, I think it would make a huge difference in safety and convenience.

Agreed if done correctly this could be great! Would be even nicer if there was a protected bike lane couplet on NW 18th and 19th leading to the intersection.

Not to kill the buzz but PBOT Trimet and ODOT are working on “protected intersections” for Barbur for SW Corridor and they’re significantly hampering it. They want to reduce bike lanes to 3 feet there to “visually narrow space” and slow down bicyclists but add slip lanes, and keep 11ft vehicle lanes with 1-2 ft shoulder shy-s. There’s a chance this project will get watered down to the point where it increases costs but doesn’t markedly change safety. I sound like debbie downer and I’ll eat crow if it turns out great but the stuff envisioned for Barbur makes me quite nervous

A real protected intersection or a bike box? Let’s hope it’s the former. It might just be better to dead-end Alder at 18th for cars with a cut-though for bikes, and convert the former roadway between 19th and 18th to a public plaza. Or perhaps a roundabout with protected cycleways could work here.

I used to live in this neighborhood and remember all the angled streets off Burnside being dangerous on foot. Drivers turn on red (or just turn if unsignalled), regardless if there is someone crossing or not, and the sharp crossing angle makes for poor sight lines. If walking on the north side of Alder, when approaching the median triangle, there is no crossing facility at all. Glad PBOT is looking to fix this!

I’ve got no specific ideas but photos on Vintage Portland document changes to that cluster of intersections. It stubbornly remains just that.

*changes have been made to that cluster before

Vehicle speeds on Burnside, particularly in the AM when hundreds of Washington County residents are treating it as another freeway, are also excessive. Is PBOT looking at ways to address that problem as well as the speeding on Alder (which is also an issue)?

For years I thought that if this intersection was in Rome or any other city of class, it would be a giant plaza with brick or stone paving.
Note that the triangle between SW 18th & 19th contains the memorial to fallen fire fighter! and both of those streets are unnecessarily wide. Wider sidewalks, more space around the memorial and narrowing lanes on Burnside would help drivers pause to give thanks. Improvements here are long overdue; it should be a Place, not just the convergence of thoroughfares.

check this out for some previous proposals:
https://www.portlandoregon.gov/bps/65760

road diet with more street trees. the firefighter memorial there has often been trashed, sadly.

sounds like a place that needs more eyes on the street.

The project will actually extend as far east as the 14th/Burnside intersection, so improvements will extend east of the freeway.

14th is the location of the tragic collision involving Tracey Sparling in 2007.

It would be really great if 14th got a complete makeover. Coming up 14th towards Burnside at 5pm is insanity. At the very least something should be done about SW Washington st and the endless stream of cars blocking the bike lane. And the band buses for the McMins or whatever parking in the bike lane should be illegal. Never mind the occasional right hook from a driver who seems to think that even though they are only going 10 miles an hour and we are going down a steep hill, there’s no way I could be going as fast as them. Or maybe their thought process doesn’t go further than the cell phone in their hand and all the pretty colors it shows. /rant

I forgot to mention the invisible bike box. How hard is it to stop before the box? I’m starting to think that I don’t understand their purpose.

Saying there is a problem and actually designing and building something that works better are two different things. Given PBOT’s recent track record, I will remain dubious that the result will be acceptable.

This is welcome news. The pedestrian infrastructure along this section of Burnside is apalling. I hope there’s a way to add a sidewalk to both sides of this bridge, where you have to cross and wait for two lights to continue walking on Burnside over 405. https://goo.gl/maps/67Pds4pszk82

I have no faith in PBOT. My prediction is that there will be a door zone bike lane, some random assortment of green paints and a bike box that’s out of view to most drivers.

I would help if continuing involvement on this project is needed. Hopefully it is part of a larger solution to the high crash corridor.