“PBOT is flush,” is how Emily Tritsch, asset manager for the Portland Bureau of Transportation, described the agencies financial situation on Tuesday night.

As we’ve been reporting, PBOT is dealing with several new streams of funding in the coming years. One of most unexpected and largest pots is the Build Portland program that is freeing up a total of $50 million for infrastructure citywide in FY 2018-2019. An initiative of Mayor Ted Wheeler, Build Portland will use City General Fund dollars to bond against large amounts of property taxes that will return to the General Fund starting in the mid 2020s as Urban Renewal Areas expire (learn more about the program via The Oregonian).

$50 million is just the start. Another $150 million will be spent seven years from now and the city says the program could invest up to $600 million in infrastructure over the next 20 years.

Wheeler has earmarked the money for outdated streets, water pipes, parks, and other civic infrastructure. PBOT is confident they’ll get most of the money because they have the largest asset backlog of any other agency by far (see chart). Of the $288 million the City of Portland needs to plug this gap, over 77 percent of it is transportation-related.

At the Bicycle Advisory Committee meeting on Tuesday night, Tritsch unveiled the internal list of nine projects PBOT wants to fund with this money. “If we had $50 million,” she said, “this is what we’d do with it.”

After scoring for equity, the nine projects below were prioritized using three key metrics: maintenance of existing assets, managing growth, and safety. As usual, the priority is on repaving; but Tritsch made it clear that PBOT will “transform” the streets they repave. That means they’ll continue their trend of adding safety upgrades as they repave and rebuild streets.

1. ADA compliant corner ramps citywide – $10.5 million ($15.5 million)
An estimated 11,000 corners across the city do not have ADA-compliant ramps. Improving corners for ADA- compliance would respond to a significant asset backlog while also reducing risk (safety conditions for Portlanders using our sidewalk system) and addressing City liability exposure. $1.5M of ADA-compliant corner ramp improvements citywide each year for 7 years ($10.5M for first tranche of Build Portland). $ Work is prioritized by risk and equity.

2. Traffic Signal System Improvements – $3.5 million ($5 million)
Nearly 400 traffic signals (40% of our inventory) are in poor or very poor condition; this includes hardware, controllers and ITS equipment. In addition, signal lamps across the city are going out. Signals have a $196M unmet need, the most urgnet of which would be addressed with this investment. Current resources to this program total $260K per year; the annual need is $20M.

6. Lents Town Center Improvements (SE Foster Rd / Woodstock Blvd) – $4 million ($7 million)
Serves eastern half of Lents Town Center, and includes Lents Town Center improvements such as signals, improved sidewalks, etc. Concept design has already been adopted. Builds on growth of area west of freeway. High on growth, equity, capacity. Improves safety on a High Crash Corridor. Does not include area east of 101st because there are long- term concepts to raise Foster Rd along the floodplain.

Tritsch also shared examples of two of the “transformations” they’d build if the money comes through. 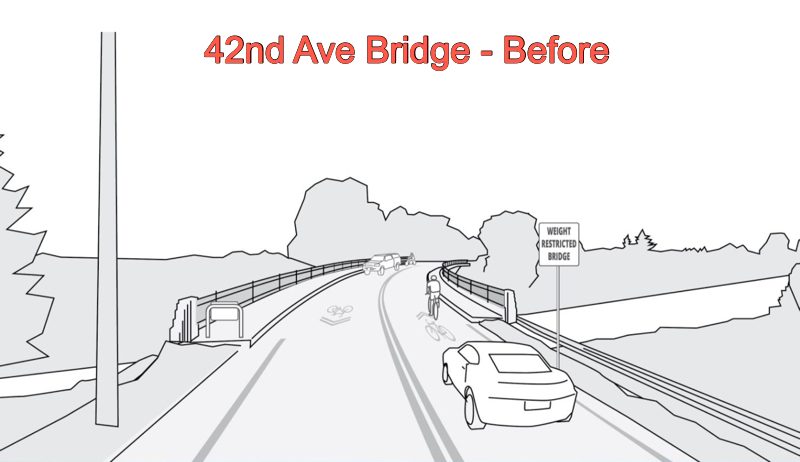 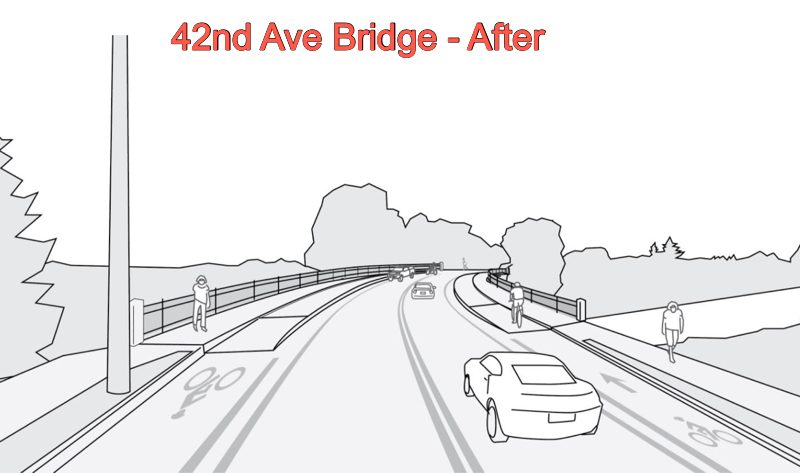 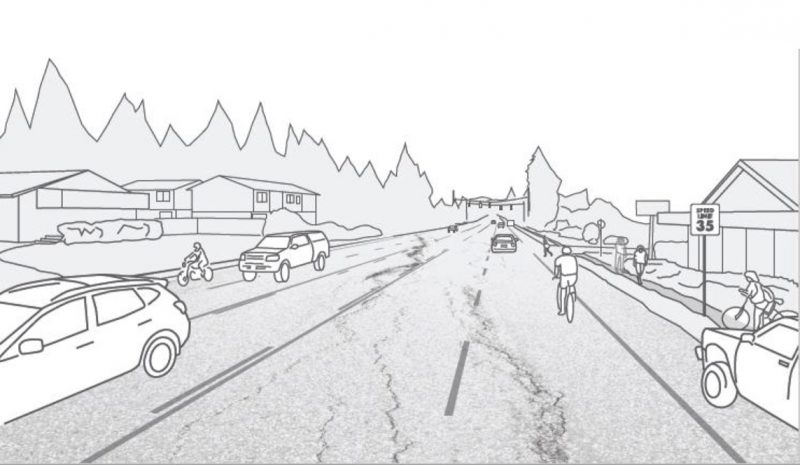 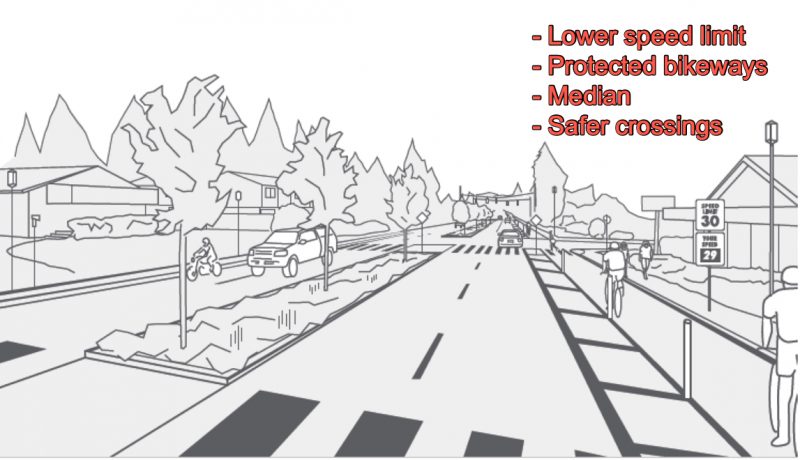 Beyond the politics and competition with other bureaus, another potential stumbling block with all this is a staffing shortage at PBOT. All this new money means PBOT is going through a major change in institutional culture. Part of that is a need to hire many new engineers to create all the plans for these new projects (I heard one PBOT source say, “We’re going from a planning-heavy agency to an engineering-heavy agency.”).

PBOT Director Leah Treat was the meeting Tuesday night and acknowledged this issue. “We are having capacity issues both internally and externally,” she said. Treat added that they’re in the process of requesting funding for 75 more full time staff. One issue: The private sector (which pays much better) is snatching up all the engineers.

Stay tuned for opportunities to show your support for these projects. They’ll be at City Council soon where a final funding decision is slated for the end of March.

Learn more about the Build Portland program via these FAQs.

NYC DOT often phases in design changes. For example, the Queens Blvd transformation which has 3+ miles of PBLs on both sides of the auxiliary streets was built with bollards first. When the rest of the money comes later, NYC DOT will pour concrete and plant trees. If PBOT implemented projects in the same fashion, Portland could have miles of PBLs across the city in the next few months. Outer Stark can have a comparable level of safety with a fraction of the price above.

At a recent Cully Land Use meeting it was also expressed by a member of staff that the 42nd avenue project would allow a real fix to provide safe passage under the bridge in both directions on Lombard. This is the location where Martin Greenough was killed.

Maybe a portion on the rehab costs on the Portland Building?

Curb projects are great, but seem to always happen absent of a larger plan. If they don’t include a bulb-out, we’ve lost out on a huge opportunity for improving pedestrian visibility and crossing safety, but if they do include a bulb-out, we’ve all but eliminated the possibility of replacing on-street parking with bike lanes or transit lanes on the street. Same goes with bioswales (otherwise we might still be referring to the Division Transit Corridor project as “BRT”). Additionally, curb projects are hardly ever built raised. You can read more about why raised crosswalks are awesome here: http://seattlegreenways.org/blog/2016/04/29/raise-the-crosswalks/ Raised crosswalks, like bulb-outs, require integration with the bike plan (depending on construction they could make for a very up-and-down ride), but would be really beneficial along many popular pedestrian corridors (e.g. Hawthorne, Mississippi, Alberta) where nearly all of the cross-streets are low-volume residential streets, and could traffic calm some of our sub-arterial streets, such as SE Stark west of Mt Tabor.

Staff is the issue.
PBOT has a plethora of plans they could draw from which would increase the mode split, but have determined the Central City Plan a high priority. The Central City Plan is very expensive and probably won’t have much of an impact on mode split, but electeds will have the opportunity for a photo op, and ribbon cutting ceremony.
I think we can do better as a city.

The single most important factor that has an effect on mode share is having protected bike lanes in high density areas. This is what has happened in Vancouver, NYC and countless other places. Portland has almost none thus far. If the mayor decided to place PBLs down SW and NE Broadway, and separate cars and bikes on Williams/Vancouver, for example, mode share would skyrocket. Portland simply doesn’t have worthwhile politicians yet.

Who would design them?

*Awarded* funding in 2012, but for the 2015-2018 STIP. That last year is typically construction. So it’s actually on schedule, or maybe slightly behind.

Any bike projects are good projects but the attention paid to east Portland is still pretty weak. We really need a replacement for city council.

How about inner Stark as well (and Belmont, and Hawthorne, and Burnside…)

Sure, let’s invest even more in the areas that historically have received the most investment, and that have the most well-off residents.

Once again, not much of anything for SW besides the SW Capitol Hwy project that has been under study for decades. Some roads and streets with a 2 foot shoulder..

SW Portland has been very reluctant to accept any increases in density while inner east Portland has seen tremendous growth. The development pattern in SW is also less conducive to walking/biking due to spread out development. I support bike/ped projects in all places, but it makes sense to prioritize safety in high density areas.

And yet, downtown full of race tracks and little meaningful easy ways to get around north to south or east to west without venturing into traffic.