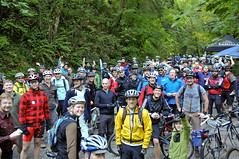 Supporters of the NWTA showed up in force
at a Forest Park rally in October of
last year.(Photos © J. Maus)

2010 was a landmark year for the Northwest Trail Alliance and now the up and coming off-road bicycling advocacy group is hiring their first ever paid staff member.

Last year was full of controversy and hard work by the group as they tackled issues like bike access in Forest Park, the new bike trails coming to Gateway Green, changes to the trail network at Powell Butte, major trail additions at Sandy Ridge, and much more.

“We all have jobs, families, not to mention trying to make time to get out and ride, which is the real reason we all do this. So, in short, we’re very excited.”
— Tom Archer

Despite being painted by some stakeholders as a large and well-heeled organization, the NWTA has done all their work with volunteers whose dedication comes from a simple passion for bicycling. Executive Director Tom Archer has been leading the ship for a few years now. He says their hiring of a Development Director, “Is a big deal.”

“This marks a transition from a pure volunteer organization to one with paid, professional staff. When we re-organized and re-branded this was one of our stated goals, to take our advocacy and organizational efforts to the next level. And to a large degree, I think we’ve been successful.”

Archer is speaking of the major shift that took place in May 2009 when the Portland United Mountain Pedalers (PUMP) — a group with a 20 year legacy of off-road advocacy — officially became known as the Northwest Trail Alliance. 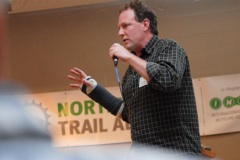 The new Development Director will have a lot of exciting projects on their plate. NWTA has existing partnerships with agencies like Oregon State Parks and others that will allow them to develop new trail systems throughout the region. They’re also actively working to bring a pumptrack to Portland and Beaverton.

And, Archer says, even with the disappointing outcome of the Forest Park bike access issue, they’ve continued to work with Parks Commissioner Nick Fish and they have made some exciting progress (stay tuned!).

With all the irons they have in the fire, Archer says, “It’s become unrealistic for the Board and key members to do all this in their free time. We all have jobs, families, not to mention trying to make time to get out and ride, which is the real reason we all do this. So, in short, we’re very excited.”

— Learn more about the Northwest Trail Alliance at NW-Trail.org.

“Large and well-heeled” that made me laugh.

I hope there is room for a short single track feature along the N. side of Going Street between Interstate and Greeley in addition to the wider multi-use path called for in “Going to the River.” Swan Island TMA will ask that design incorporate this if possible; we have included Tom in the preliminary discussions.