“We are not opposed to expanding the wildlife area, but feel strongly Pioneer Orchard trail should remain open.”
— Tom Archer, director of advocacy for the Northwest Trail Alliance

The Portland Parks and Recreation Bureau will hold a public open house tonight to unveil a new trail plan for Powell Butte Nature Park. Off-road cycling advocates are concerned that one of the proposed concepts on the table expands the wildlife area and closes a popular riding trail.

At a meeting last week, staff from Parks Commissioner Nick Fish’s office offered a preview of “Concept 4” to Northwest Trail Alliance Advocacy Director Tom Archer. Archer says Concept 4 would expand the park’s wildlife area to 200 acres and would close Pioneer Orchard trail, which he says is a trail “actively used by our members and other off-road cyclists.”

“We are not opposed to expanding the wildlife area, but feel strongly Pioneer Orchard trail should remain open.”

Archer says there are two reasons they want the trail to stay open: It would retain about a mile of trail and disperse users over a wider area of the park and it is part of a large perimeter loop. Without it, Archer says, rides would be restricted to the western areas of the park. 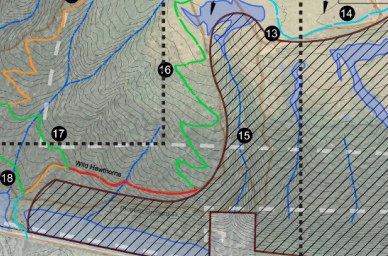 Besides their concerns about the trail closure, Archer says that in the bigger picture, the NWTA is supportive of the changes coming to the park. The project would “enhance’ the riding experience throughout the park due to major re-engineering and re-routing of existing trails — most of which would be multi-use (legal for people on bikes and on foot).

A recent online survey on Powell Butte conducted by the Parks Bureau found that of all uses of the park, biking was by far the most popular. 66% of respondents said biking was their primary activity when using the park. In addition, 41% said that they access the park from the Springwater Corridor Trail (more than any other access point).

The Parks Bureau will be taking comments on the various concept plans at the open house tonight.

This is an amazing tribute to cyclists being active, not to the fact that the majority of users are cyclists 🙂

I filled out the long internet forms that the city put out to gauge the public feeling on the upcoming changes, so I guess that makes me one of the 66%! I was very confused by Option 4, because, while it looked like it would provide the best cycling experience possible in the Park, it also included the poison pill of “possibly” closing down Pioneer Orchard Trail. I pointed this out to the NWTA on their online forum, and I’m really glad to see that they’re taking their concerns to the meeting tonight. I’d love to attend, but I was hit by a truck the other day (on my road bike), and I’m still recuperating.
Thanks NWTA!
Charley

Yikes, Charley. I hope you and the bike are doing ok.

I’m doing better, my bike is still broke! The other guy’s at fault, and is insured. Thanks!

Anyone know how the meeting went?

Charley – hope you get a settlement from his insurance and the bike gets fixed!