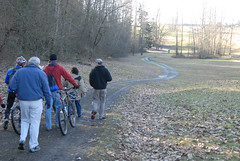 Tomorrow the Gateway Green project will pass its most important milestone since citizen activist Linda Robinson and East Portland developer Ted Gilbert first unveiled their vision back in May 2008. A host of major electeds, supporters, and other bigwigs will come together for a ceremony to officially sign the project’s “Declaration of Cooperation.”

This declaration marks the conclusion of the Oregon Solutions process, which Gateway Green embarked on back in April 2009. At that time, Governor Ted Kulongoski made this project a high priority for the State of Oregon because he felt, “This project supports Oregon’s Sustainable Community Objectives, encompassing environmental, economic, and community objectives.”

In September of this year, Portland Parks Commissioner Nick Fish and the Portland City Council stepped up to take a key leadership role in the process, which set into motion tomorrow’s signing ceremony. 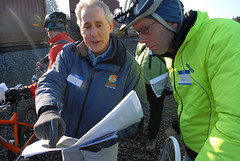 Developer Ted Gilbert (left) and State Parks
Commissioner and co-convener on the project
Jay Graves, during a site visit in February 2009.

Tomorrow’s event (to be held at Aloft Hotel at Cascade Station) will be attended by:

The Declaration of Cooperation is a 25-page document that includes statements of commitment from more than two dozen organizations. Back in November, Portland City Council approved $200,000 a year to operate and maintain the site.

Gateway Green is a 35 acre parcel of land owned by ODOT that sits between the I-84 and I-205 freeways. Phase One of the project is estimated to cost $5 million and includes a host of new bike trails and bike-related amenities. According to Portland Parks and Recreation, construction could begin as soon as 2012. For more information about the project check out GatewayGreenPDX.org and browse the comprehensive coverage in our archives.

Good news for Gateway Green! Glad to see it. It’s an interesting little place, with a lot of potential. Worth taking note of as you ride the 205 trail.

Too bad they can’t put more focus on a good bike lane for 102nd.

Yes absolutely.
We should stop all non-utilitarian public works projects, like parks and bike lanes, and go stop poverty, starvation and warfare some where else.
There is always something more important than our petty projects and there is always someone suffering some where and you should drop everything and go.

OTH
I can understand fairly large initial setup and conversion costs from this ODOT “owned” parcel that is essentially abandoned.
Why is annual upkeep going to cost $200,000?
What is going to be required here, forever, that will require that much money?
What is ODOT currently paying out in total costs for “ownership” and continual maintenance of this parcel?
While it is abandoned I have see mowers out here; they must be pay for from ODOT’s budget.
So when Portland Parks takes this over parcel and it becomes the Gateway Green they will be responsible for upkeep but ODOT still owns it, sets limitations and will pocket the money they will no longer be spending on upkeep of the parcel?

I think it was about 20 years ago that I and a few friends took a group of maybe 12 boys over to this site with there bikes for some off road BMX ‘ing. There were extensive trails with hills and jumps. The only concern at the time was that it was occasionally used by folks on off road motorcycles as well. I’m just guessing at the time frame but My son is 31 yrs. old now. After a while it was all bulldozed up and biking the area was discouraged. Good to see the area developed for the next generation.

This is great news! With the lack of additional access to Forest Park (process still in-work) and the need for better off-road trails/routes close-in to the city – it could really fill a void. I’m excited that this could become a showcase cyclocross venue right in the city with easy access to bike routes/Max lines etc – could be a home run project if done right.

Great news! This is will only help to strengthen the bicycle prominence in Portland. This is a win for all bicycle advocates. More places to ride bikes means more people on bikes.

If this place is a bicyle only location make the pople who ride bicycles pay for it – if they allow everybody to use it then let everyone pay for it. Right now this place is being setup for a single purpose Bicycle / BMX area.

1. Will Gateway Green only be used for cycling activities?

No. Other uses will include: walking and hiking, jogging and cross-country running, rock climbing, family picnicking; habitat restoration and preservation; birding; environmental testing, monitoring, and education.

defender of logic
Reply to  james

Should we do the same with tennis courts, basketball hoops, horseshoe pits, walking trails and everything else that currently exists in a public park as well?

Yes – anything that is dedicatred to one group of people should be paid for by that group of people – I have no problem with that – I shoot so I pay my range fees – I hunt so I pay my license fees – if you ride a bicyle then you pay for those bike lanes – the bicyclist already get away with riding on the roads paid for with gas and licensing fees. I for one do not support the bicyclists until they start paying thier way.