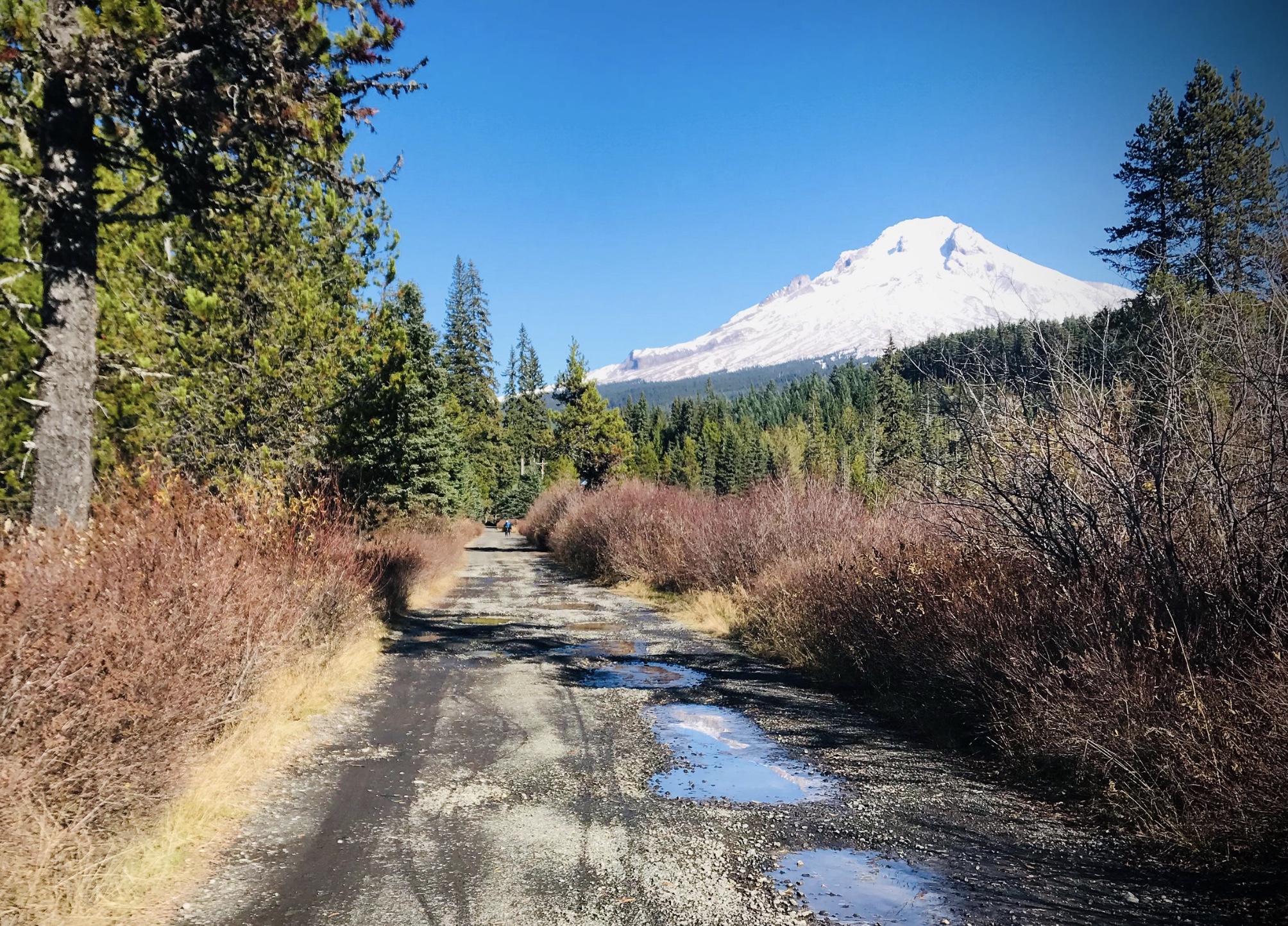 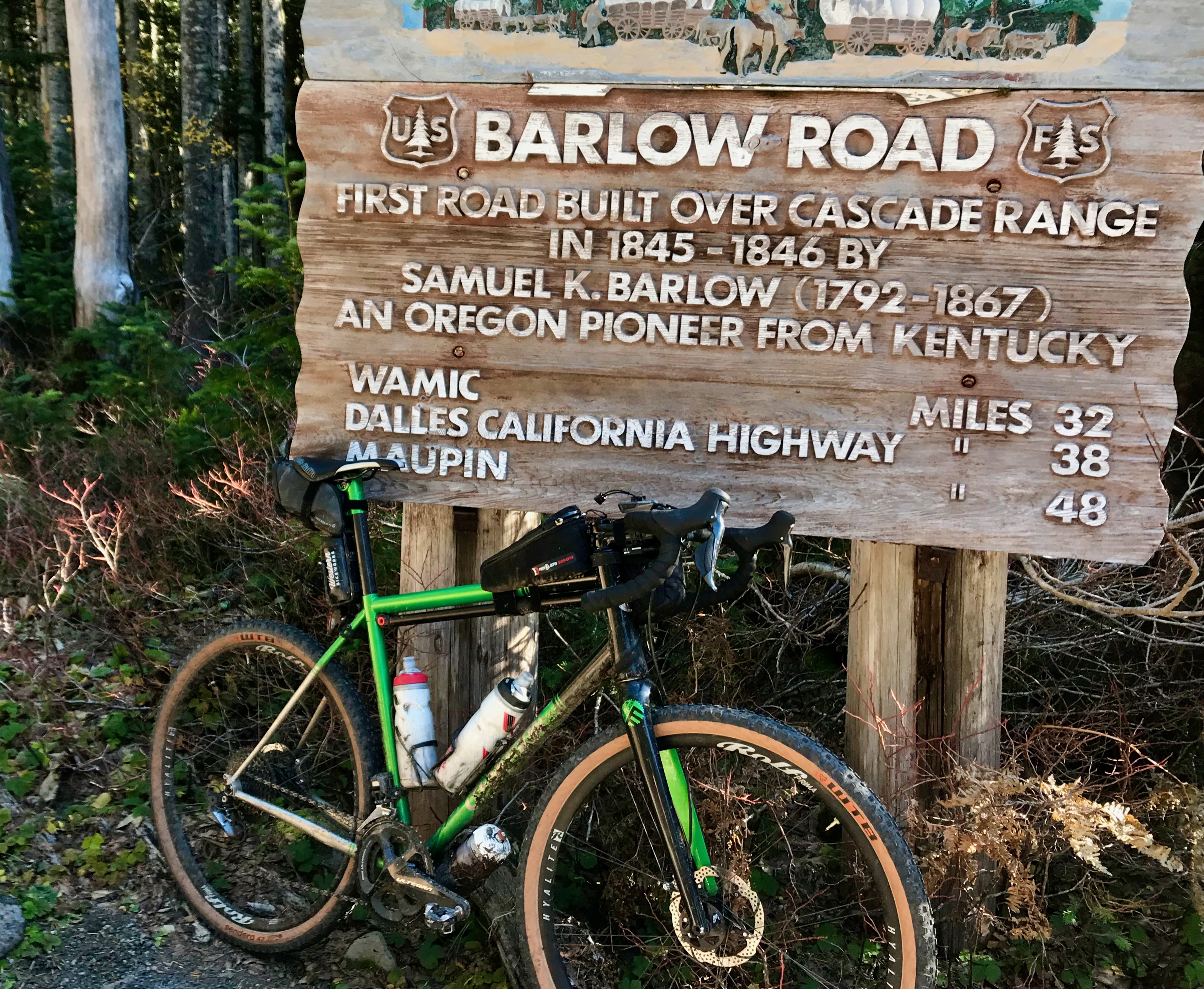 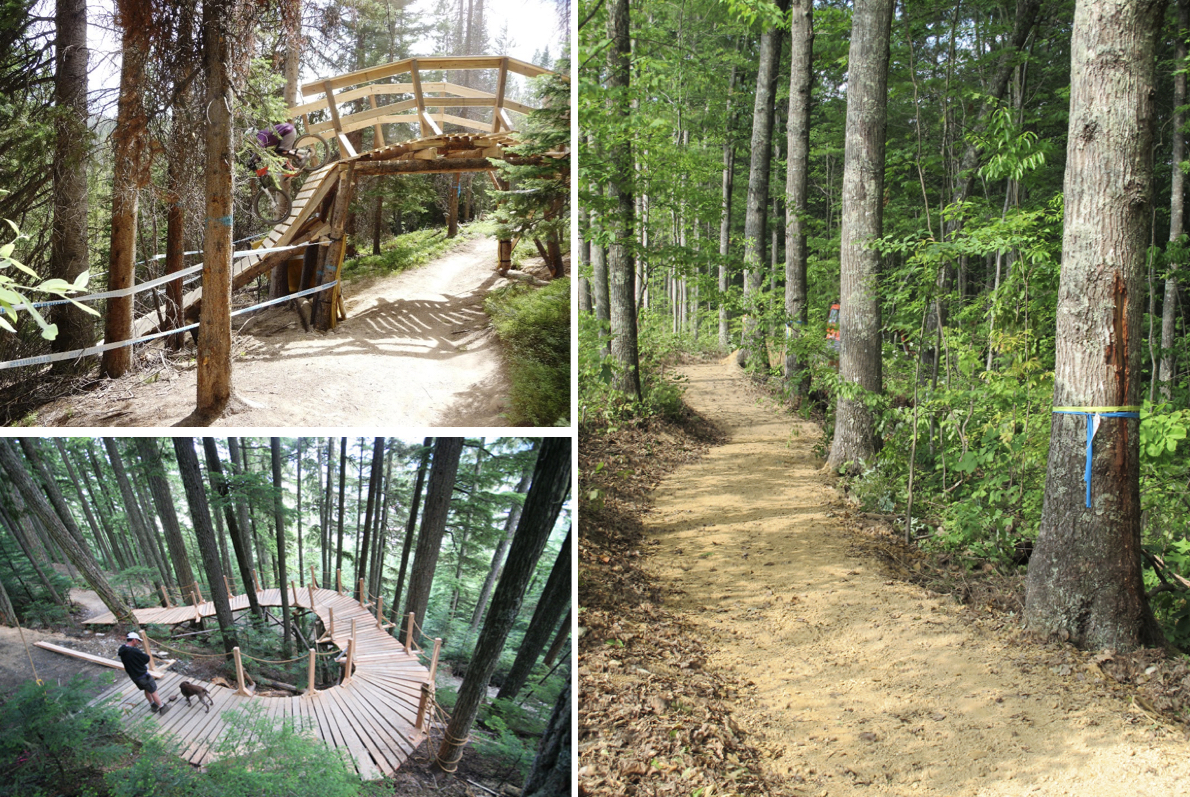 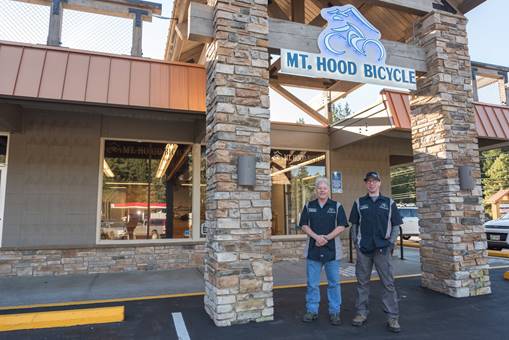 The Mt. Hood area has been maturing as a cycling destination for years now with the establishment of the Sandy Ridge Trail System, the popularity of unpaved forest road riding, the mountain bike trail riding opportunities, and the much-improved (and bike-friendly) bus service. But one thing has been missing: a bike shop.

We’re very happy to report that that is no longer the case!

George Wilson, a former retiree who we’ve featured in the past for his bicycle advocacy in the Mt. Hood area, is opening Mt. Hood Bicycle this month in the Hoodland Shopping Center in Welches. Wilson is partnering with Kevin McCarthy on what will be a full service shop that will cater to locals and visitors alike. Both Wilson and McCarthy are certified bicycle mechanics and have decades of cycling experience between them.

We contacted Wilson via email today after reading about the shop in the Mountain Times. He said they’ll have a soft opening January 16th and are planning a grand opening in March. 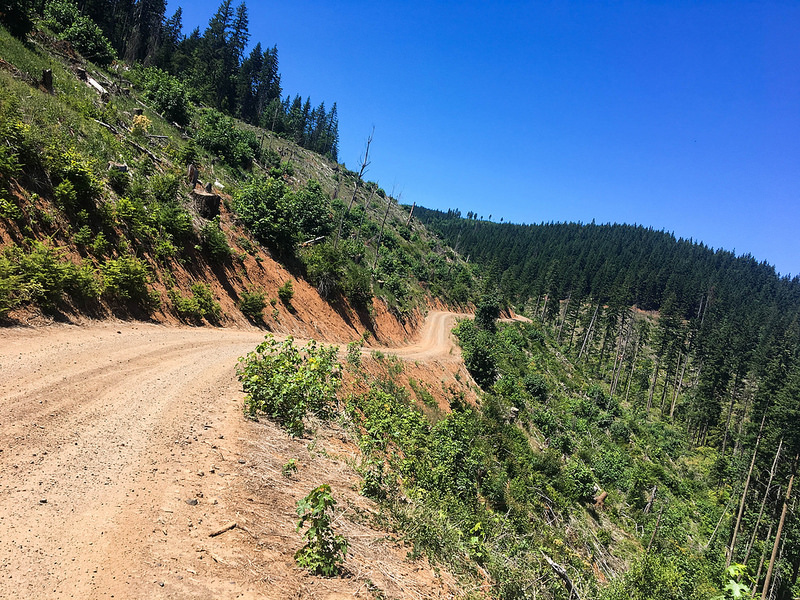 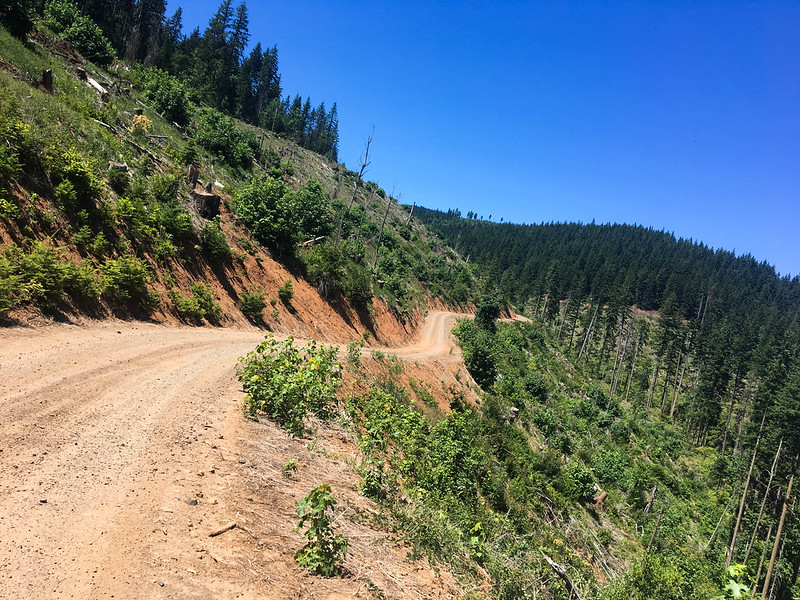 New to me, Kingsley Road above Hood River was a welcome alternative to Dee Highway.
(Photos: J. Maus/BikePortland)

One of the ways I fit cycling adventures into my life is to ride to places where I’m already planning to do something with my family. So, when we planned to meet some friends in Hood River on Sunday, I knew it was a golden opportunity. 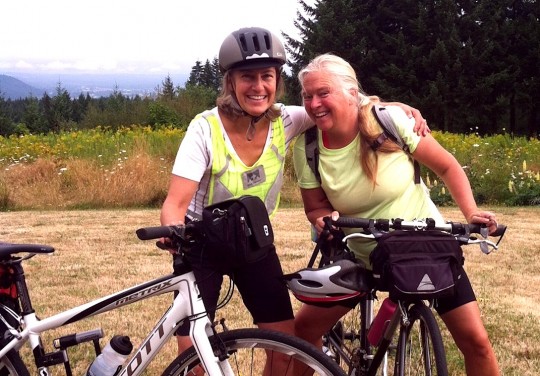 [This story was written by Jen Sotolongo, a Clackamas County tourism development specialist. It first appeared in the Clackamas County Bicycle Tourism Newsletter and is being used with her permission.] 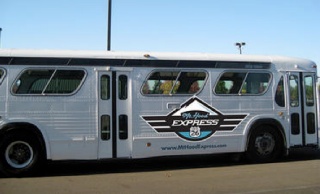 Come aboard (with your bike),
they’re expecting you.

The City of Sandy and the Mt. Hood area are in the midst of a transportation revolution and bicycling is playing a major role.

Thanks to the huge success of the Sandy Ridge Trail System, the burgeoning popularity of adventure road riding, and bicycle tourism efforts, cycling has reached a tipping point. The excitement around cycling has spurred investment and attention from government officials, inspired a new bike advocacy group, and has had an economic impact on area businesses. Add to that the Oregon Department of Transportation’s ongoing work on the Mt. Hood Multimodal Transportation Plan and you’ve got the ingredients for change.

Two developments we’re keeping tabs on in this area are the launch of a new, bike-friendly bus service along Highway 26 and the growing energy around the Mt. Hood Bicycle and Pedestrian Coalition. 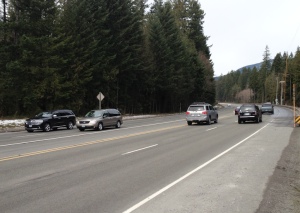 Reacting (in part) to the desires of more than 2,200 survey respondents, the Oregon Department of Transportation (ODOT) is poised to implement several projects in the Mt. Hood area that will improve bicycling access.

As we reported back in August, wider shoulders on Highway 26 and Highway 35 were among a list of projects being considered as part of ODOT’s Mt. Hood Multimodal Transportation Plan. Last month, that plan’s Project Leadership Group (made up of ODOT, County, and federal “decision makers”) released their project recommendations (PDF). On that list are several projects in “Group A” that will impact bicycle access. 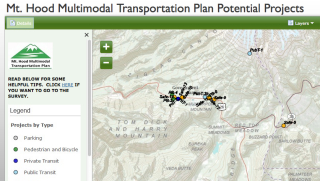 ODOT has created an interactive map of the projects.

The Oregon Department of Transportation (ODOT) has revealed their list of projects that could get funding through their Mt. Hood Multimodal Transportation Plan (MHMTP). Along with the list is an online survey where you can tell them which of the 40 projects you think are most important.

As we first covered back in March ODOT is putting a renewed focus on the highways that lead up to Mt. Hood (US 26/OR 35 between Sandy and Hood River) in an effort to improve safety and give people more options for traveling to and around the popular recreation area. This Multimodal Plan is a $650,000 effort to plan and then implement a number of small-scale projects that will make transit, walking, biking, and driving easier and safer. 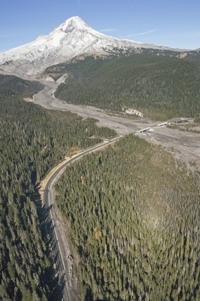 The Oregon Department of Transportation (ODOT) has released an online survey that seeks input to inform their Mt. Hood Multimodal Transportation Plan. As reported back in March, ODOT wants to make it easier and safer to bike, walk, and hop on a bus around Government Camp, Timberline Lodge, and all the other popular recreation destinations on Mt. Hood. The plan focuses specifically on reducing auto trips on highways 26 (Sandy) and 35 (Hood River).

ODOT Region 1 Project Planner Mike Mason told us in March that, “What we’re hoping to find are good ideas to reduce the number of people who feel they need to drive cars up there.”

In a statement released today, Mason said, “People travel along the Mount Hood highway corridor for many reasons… We want these people who use the highway to help shape the future of transportation on the mountain.” 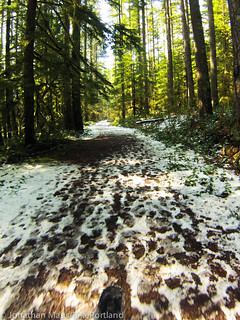 On a bike trail between Rhododendron
and Lolo Pass Rd.
(Photos © J. Maus/BikePortland)

Last weekend I had the good fortune to spend a few nights in a friends’ cabin in Rhododendron, a sweet little community about 20 miles toward Mt. Hood from the town of Sandy. I brought my mountain bike along with hopes of riding at Sandy Ridge. I’m not very familiar with biking around Mt. Hood at all, but I managed to discover a nice route from the cabin to the trails and figured it’s worth sharing. The best part is that I was able to completely avoid riding on Highway 26.

This out-and-back begins in Rhododendron. You’ll know you’ve arrived at the starting point when you come to Mt. Hood Foods and the Dairy Queen which are just up from the electronic signboard and the Still Creek Road exit on Highway 26 (map). There are several places to park among the dozen or so eateries and motels. You’ll want to find East Arlie Mitchell Road right at the northwest exit from the Mt. Hood Foods parking lot.

Ride on East Arlie Mitchell for just a few hundred meters then go left on Forest Road 19/Zigzag River Road where Arlie Mitchell turns into East Henry Creek Road. One of the cool features of this ride is that you’ll be traveling along the historic Barlow Road Trail route. You’ll see signs for the route in several spots beginning at Road 19…

The Oregon Department of Transportation (ODOT) knows that if Mt. Hood is to remain a popular recreation destination there’s got to be a better way to get up there than driving in a car. Highways that connect to Mt. Hood are becoming magnets for congestion and crashes, so the agency has launched the Mt. Hood Mutlimodal Transportation Plan, a project they’re working on in partnership with the US Forest Service, the Federal Highway Administration, and Hood River and Clackamas Counties.