‘Too many cars’ on Tillamook greenway spur talk of re-route

Google Streetview of NE 33rd and US Grand Place. This is supposed to be a low-stress street where people can ride bikes with small children.

A key section of one of Portland’s oldest neighborhood greenways needs some help.
END_OF_DOCUMENT_TOKEN_TO_BE_REPLACED 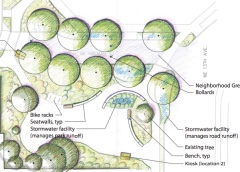 Back in May, I took a closer look at the project, with a focus on a “pocket park” idea that was being thrown around. The concept was to take the existing, small and ordinary park at NE Holman and 13th and make it something special. Envisioned as a gathering place for the community, the revamped Holman City Park would be extended all the way across Holman, with through-access for biking and walking only. END_OF_DOCUMENT_TOKEN_TO_BE_REPLACED

PBOT is considering new bicycle crosswalks,
like this one in concept stage for
SE 53rd and Stark.

Crosswalks are standard engineering treatments designed to help people get across streets with a bit more safety; now the City of Portland is looking to do something similar for bike traffic with bicycle crosswalk markings, a.k.a. the “cross-bike”.

The concept itself has been floating around PBOT since about 2007, but the idea has yet to gain real traction. The other night, while looking over plans for an upcoming road project, I was surprised to see them as prominent features. Turns out that PBOT hasn’t forgotten about them.

PBOT bicycle coordinator Roger Geller shared a bit more about bicycle crosswalks via email today. Check out the Q & A below for more… END_OF_DOCUMENT_TOKEN_TO_BE_REPLACED

New crossing at MLK and Going: How does it work for you?

A local TV news outlet is questioning the safety benefit of a crossing treatment recently completed as part of the N. Going bike boulevard project.

I got an email from Scott Burton at KGW TV (Portland’s NBC affiliate) on Friday that they were doing a story about the crossing on their 11 o’clock news. Burton said they’ve received several complaints that since the change, the crossing has become more dangerous. He also said they witnessed a few close calls (bike/car) and that a person walking across was “severely injured” after being hit by a car last week.
END_OF_DOCUMENT_TOKEN_TO_BE_REPLACED

END_OF_DOCUMENT_TOKEN_TO_BE_REPLACED

This “sharrow flower” (for lack of a better name) is at N. Concord and Bryant. My bike is in the photo for context.
(Photos © J. Maus)

END_OF_DOCUMENT_TOKEN_TO_BE_REPLACED

Get involved with the 50’s Bikeway project

The City of Portland Bureau of Transportation is rolling ahead with their 50’s Bikeway project. The $1.5 million, federally funded project aims to make a 4.5 mile north/south corridor between the Hollywood and Woodstock neighborhoods more comfortable and efficient for people on bikes.

Tomorrow night (9/29) is the second meeting of the newly formed Citizen’s Advisory Committee for the project and there are plenty of big issues to weigh in on. According to PBOT project manager Rich Newlands, who shared details of the project at a recent Bicycle Advisory Committee meeting, the biggest challenge for the project is how to make room for bike traffic on SE 52nd south of Division. That stretch of road not only has high volumes of (relatively fast) motor vehicle traffic, but PBOT estimates they’d have to remove 200-250 on-street parking spaces to make room for bike lanes. END_OF_DOCUMENT_TOKEN_TO_BE_REPLACED

END_OF_DOCUMENT_TOKEN_TO_BE_REPLACED

City will cut ribbon on ‘Neighborhood Greenways’ at Beach School

PBOT wants to showcase their growing network of residential streets that have been engineered to prioritize the safe movement of bicycles. These streets are also known as bicycle boulevards, but PBOT will brand them as ‘Neighborhood Greenways’ to show that they’re not just great for bikes, but that neighborhoods also benefit. The “greenways” aspect is a nod to how some of the streets include bioswales, new street trees, and other “green streets” features (more on the name change here and here). END_OF_DOCUMENT_TOKEN_TO_BE_REPLACED

Streetfilms has a new video on 20’s Plenty for us, a campaign in the U.K. working to make 20 mph the standard speed limit in residential areas. The campaign is catching on quickly, with more and more U.K. cities adopting the policy all the time. Given that PBOT might be considering a legislative fix to wrest greater control of speed limits from ODOT, and the fact that Mayor Sam Adams has already shown an interest in reducing speed limits and has made safety his number one transportation priority, this could be an idea that catches on here in Portland. END_OF_DOCUMENT_TOKEN_TO_BE_REPLACED