Sometimes we all make mistakes. TriMet wants more people to think about the fact that some mistakes can be fatal.

It can be difficult to talk about this subject without blaming the victims of traffic violence. To its credit, the video TriMet released today focuses on examples of people who are acting both illegally and at least a little recklessly rather than (as the New York City transit union did recently) condemning people simply for not being cautious. There’s a big difference. 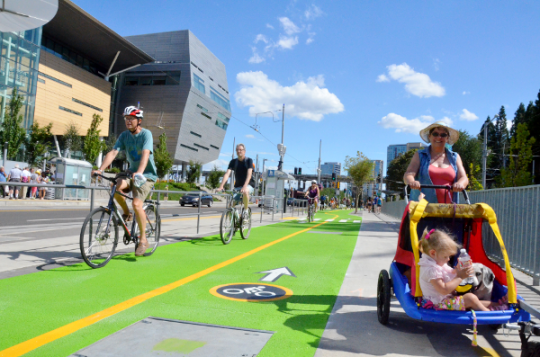 The new coloring and lane sorting makes things much more intuitive and comfortable for people biking and walking.
(Photos: M.Andersen/BikePortland)

Just in time for Tilikum Crossing’s public preview last weekend, TriMet and the City of Portland unveiled a new design for the main street leading to the South Waterfront. 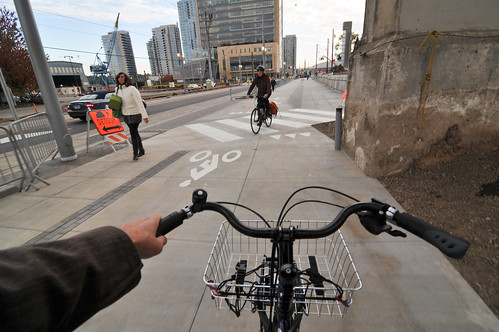 It won’t look like this much longer.
(Photo © J. Maus/BikePortland) 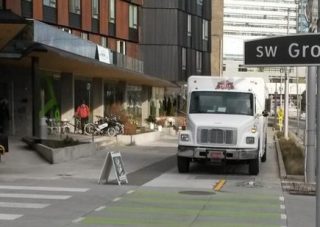 Ask Portland bike advocates, planners, or city staff what our best example of a high-quality bikeway is and many of them might say the SW Moody cycle track. That’s why we were so disappointed when photos appeared on Twitter yesterday showing large delivery trucks parking on it.

SW Moody is the main artery between the burgeoning South Waterfront district and downtown Portland. Its cycle track opened three years ago (read my first impressions here) and was funded through a $23 million federal stimulus grant that also paid for a reconstruction of the street to facilitate a streetcar and light rail line that connect to the new Tilikum Bridge.

A new mixed-use development on SW Moody includes several ground-level retail businesses including a bakery and a deli. According to people who ride the route regularly, it’s common to see delivery trucks using the cycle track to load and unload. 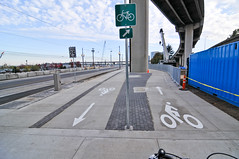 Expect the unexpected when you ride
on the Moody cycle track for
the next few months.
(Photo © J. Maus/BikePortland)

The hits in our detour-filled summer just keep on coming…

TriMet has temporary closures in place on the SW Moody Ave cycle track as part of their ongoing Portland-Milwaukie Light Rail Transit Project. The closures started last week and will last through October 18th. DeeAnn Sandberg with TriMet Community Affairs says the closures are necessary to allow TriMet to install tracks in the roadway. SW Moody is a major corridor to the South Waterfront neighborhood (and points south), the Aerial Tram, as well as OHSU’s various patient facilities and offices. 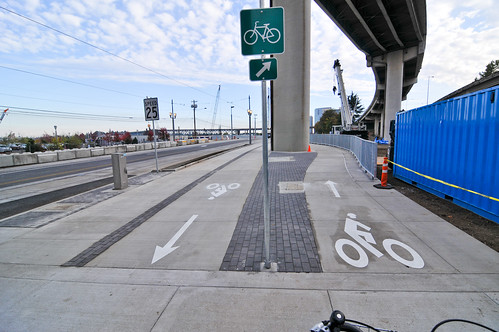 Yesterday, the SW Moody Project opened for business and I took my first ride on its cycle track. 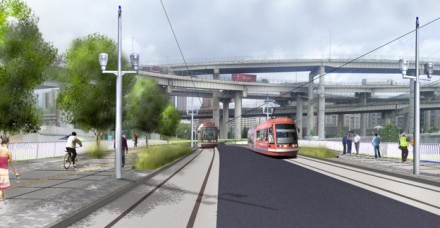 Tomorrow, the Portland Bureau of Transportation will lift the lid on their SW Moody Project that includes what will be downtown’s first-ever cycle track. 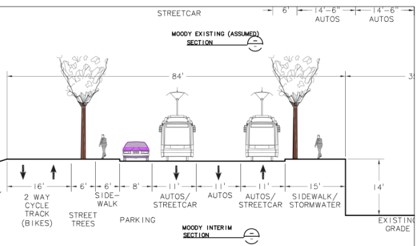 Cross section of how SW Moody will look after a $23 million facelift thanks to federal stimulus funds awarded today.