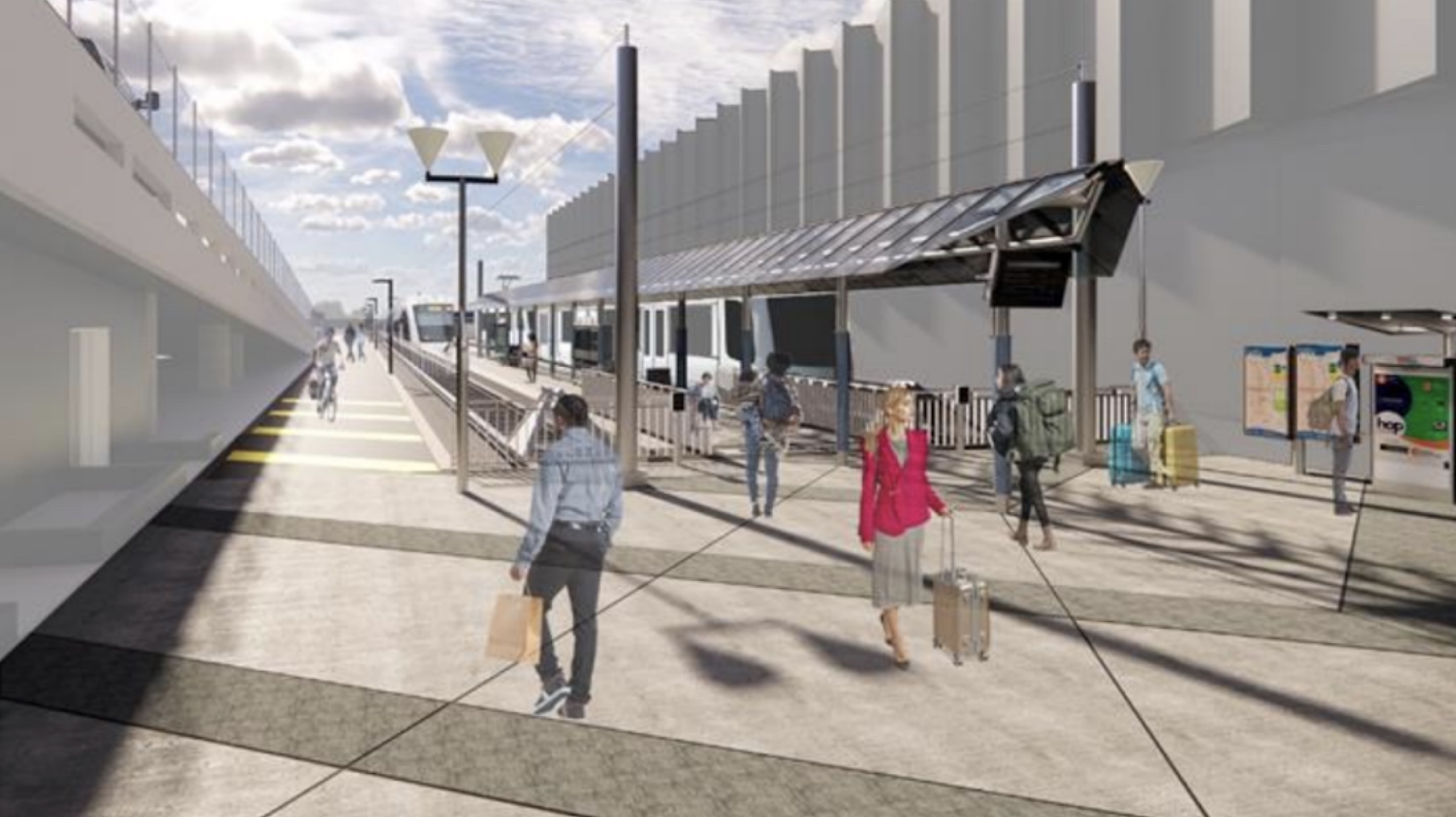 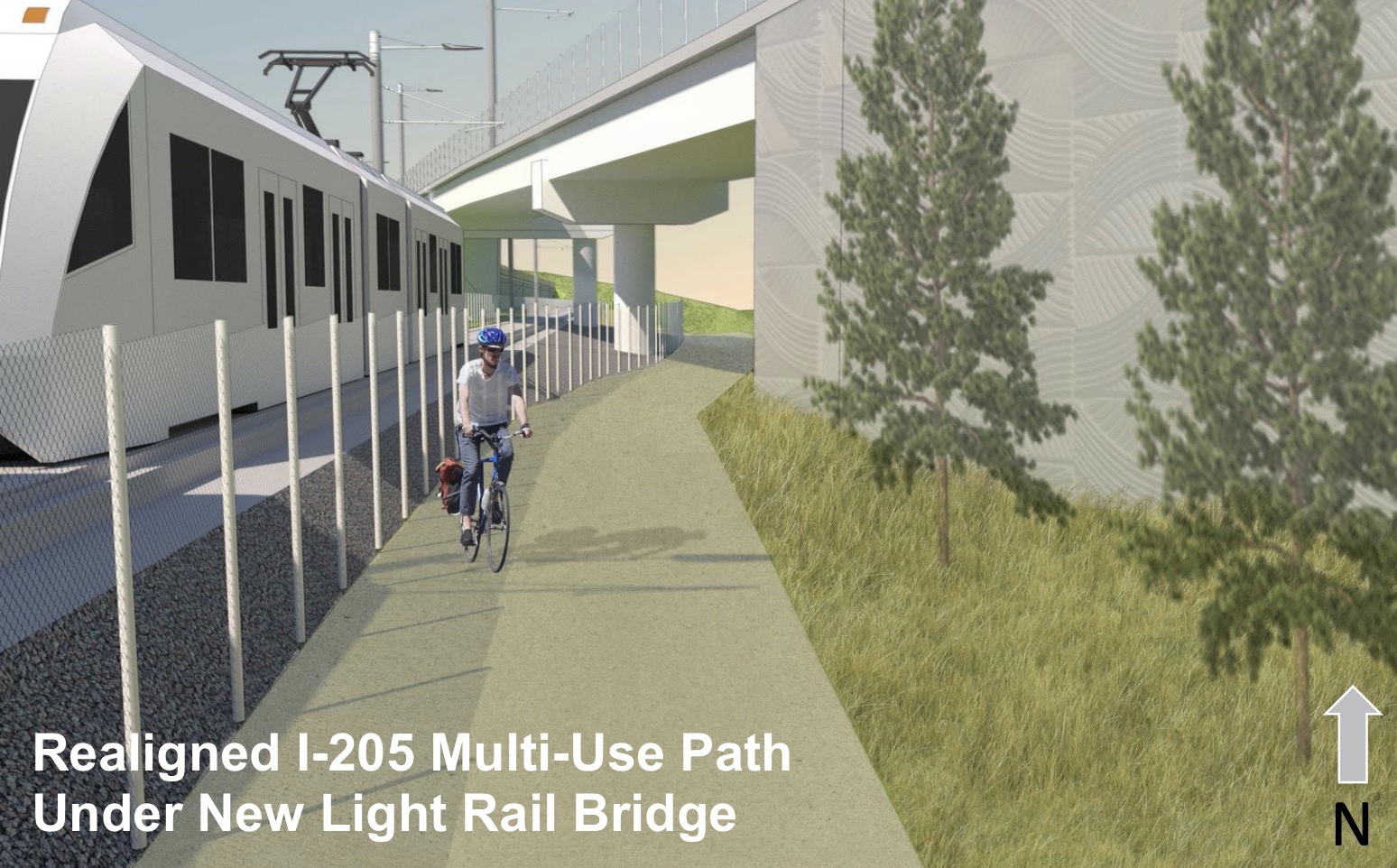 A $206 million project that will improve service on TriMet’s Red light rail line will also come with significant benefits to bicycle riders.

The “Better Red” project will extend the Red Line further west in Washington County; but what we’re watching closely is how the improvements will impact the I-205 path in east Portland.

According to TriMet, the project will add a second track on two sections of existing single track between Gateway Transit Center and the Portland Airport. Adjacent to these new tracks and stations, TriMet plans to build multi-use paths. The project will also re-align the existing path. 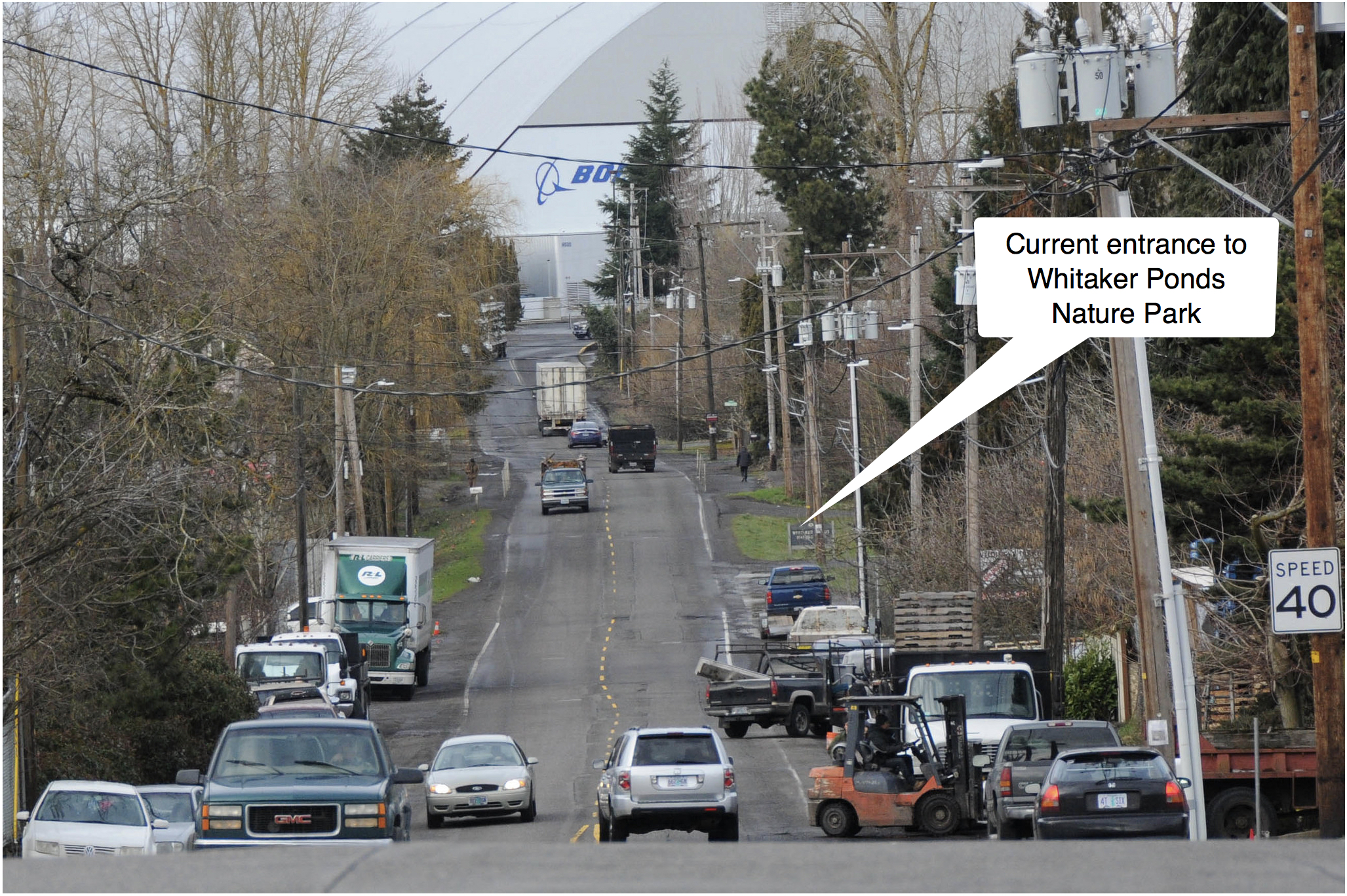 By next summer, Portlanders will have a new park they can bike to — and a popular route to the airport will be vastly improved. Furthermore, an industrial area with thousands of jobs will be easier to get to. 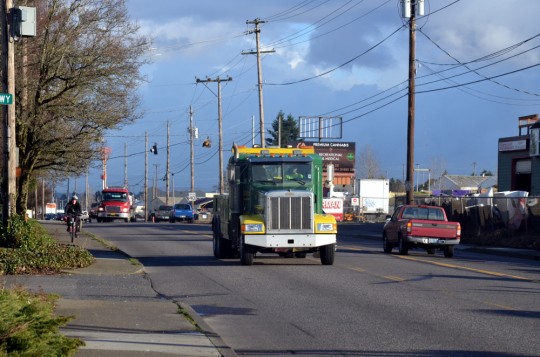 This post is part of Gap Week, a special series made possible by our sponsors and subscribers.

Portland has a problem: like most U.S. cities, it’s been losing middle-wage jobs, especially the kind you can get without a fancy degree.

Many of the middle-wage, blue-collar jobs that remain are spread in industrial centers along the rivers with limited public transit access. And one of the most important clusters is one in Northeast Portland that many Portlanders know well: Portland International Airport. 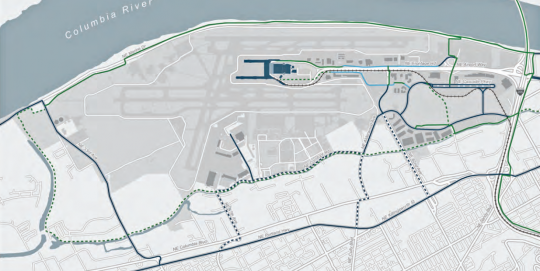 Fifteen years after a rising bike-commute rate among airport workers led PDX to begin a strategic focus on its biking and walking connections, links to the airport keep getting better. Now, the airport is preparing to double outdoor bike parking, and, in the longer term, help the City of Portland pay for a multi-use path looping the entire airport plus three bike lanes that’ll greatly improve airport access from the city. 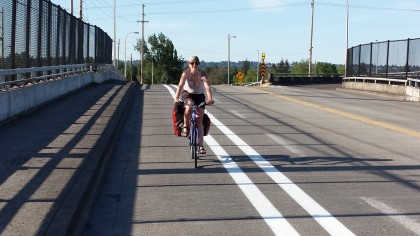 A new pair of buffered bike lanes across Lombard Street in Northeast Portland will improve both work and fun trips to the Columbia River area this summer.

The crossing will uses the bridge at 33rd Avenue to link the river and slough, as well as nearby port, airport and retail land, to the rest of the city. It also bears traffic on 33rd across a series of railroad tracks just north of Lombard. 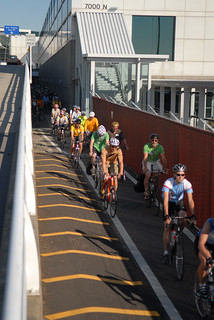 The Port of Portland wants your feedback on bicycling in and around the Portland International Airport (PDX). They’re hosting an open house next week (3/19) to share information and hear your thoughts on existing facilities and what they can improve on in the future.

The impetus for this open house is an effort to update the Portland International Airport Bicycle and Pedestrian Plan (PDF). That plan was the first biking and walking plan ever created for a commercial airport; but it came out in 2003 and it’s slated for an update this year.

There’s plenty to talk about when it comes to bicycling around PDX. As we’ve written about several times over the years, the Port has some bike-specific routes, wayfinding signage, bike parking, and other amenities that make bicycling to the airport a viable option for some. A recent study about bike-friendly airports by the Institute of Transportation Studies at UC Berkeley held up PDX as an “exemplary” model of how to provide bicycle access. But while steps have been made, biking to the airport remains something reserved for the “strong and fearless” and much more can be done to make it as safe and convenient as driving or other modes.

We all heard the big news back in April when Frontier Airlines removed the flat fee for checked bicycles. Long before that, we’d floated the idea of having Portland International Airport (PDX) become something of a bikes-fly-free oasis. Imagine the symbolism (and huge win for PR/tourism) if PDX convinced all its local carriers to make a clear statement that bicycles (and their people) are welcomed with open arms!

Well, one reader who happens to be an employee of Southwest Airlines, has been pushing on that idea internally and he’s made a bit of a breakthrough. 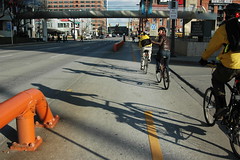 Riding in other cities can be fun
and fascinating — like this ride in Baltimore.
(Photo © Elly Blue)

The holiday travel season is coming up. If you’re leaving Portland, maybe you’ve thought about bringing your bike along for the trip this time.

A bike doesn’t make sense for every trip or every destination. But if it does fit in with your plans, the experience of traveling with a bike comes highly recommended. A bike can give you independence, flexibility, adventure, and a surefire way to meet people wherever you go.

How you bring the bike, what kind of bike is best to bring, and how much it costs all depend on whether you’re flying or taking the train. Here’s the rundown:

Portland is fortunate to have a bike-accessible (and friendly) airport just a few miles out of town. It’s a good thing too, because there are also growing number of people who bike there to catch a flight. We also get our share of car-conscious visitors (meaning, folks that would rather not drive once they get here in order to experience our world-famous bike scene).

The options at the airport for either parking your bike for extended periods, or for taking your bike with you aren’t so hot. As we’ve discussed recently, prices for bikes as baggage can be pretty high. And as for parking, there’s no secure area for biking travelers to park (there is however, a locked and gated parking area for airport employees).

Leave it to a bike-loving general manager of a hotel near the airport to see an opportunity.

“I know she wasn’t responsible [for the fee], but I was still tempted to ask her, ‘how much are you charging for golf clubs again?'”
— Slate Olson, upon being told his bike would cost $175 each way

On Wednesday, May 20th, Portlander Slate Olson was headed to Washington D.C. on a business trip when a woman working the United Airlines ticket counter at Portland International Airport (PDX) told him it would be $175 to take his bicycle along. Each way.

Olson wrote to me later that, “I know she wasn’t responsible, but I was still tempted to ask her, ‘how much are you charging for golf clubs again?” (Golf clubs fly free on United).

Olson’s experience has put him on a mini-campaign to rid PDX of baggage fees for bikes.

Olson is the general manager for Rapha, a U.K.-based bike clothing company with its North American headquarters in Portland. The way Olson sees it, if Portland wants to continue to be the spot for bicycling and bike tourism, this issue needs to be resolved.