We all heard the big news back in April when Frontier Airlines removed the flat fee for checked bicycles. Long before that, we’d floated the idea of having Portland International Airport (PDX) become something of a bikes-fly-free oasis. Imagine the symbolism (and huge win for PR/tourism) if PDX convinced all its local carriers to make a clear statement that bicycles (and their people) are welcomed with open arms!

Well, one reader who happens to be an employee of Southwest Airlines, has been pushing on that idea internally and he’s made a bit of a breakthrough. 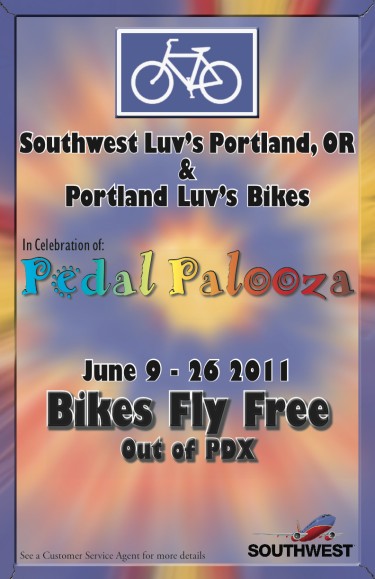 LaBonty will hang these flyers around the baggage claim area and ticket counter.

Lents neighborhood resident Tom LaBonty (whom you will recall as the cargo bike crafting guru behind Tom’s Cargo Bikes) said his new station manager liked the bikes-fly-free idea and has approved a limited-time promotion to coincide with this year’s Pedalpalooza event.

Here’s how it works: If you’re flying Southwest Airlines out of PDX from June 9 thru June 26th, the bicycle baggage fee will be waived.

LaBonty wants to make sure folks realize this is only for travel out of Portland and it’s not a systemwide promotion. “This is not a sales gimmick,” he says, “our marketing department has nothing to do with it and we don’t expect to sell any additional tickets because of this.”

To LaBonty, it’s just the right thing to do. “It’s just friendly nod to the Portland biking community – which several of our employees belong to.”

He plans to hang copies of the flyer at the ticket counter and baggage area to make folks aware of the promotion.

It’s not much, but at least it’s a start. “Hopefully, next year we can get a better agreement,” says LaBonty. Yep, and hopefully this small gesture inspires other airlines to follow suit.

That’s great news, meaning I won’t have to take a train for my travels in June!

yay Southwest! I try to fly them when I can (even when not flying with a bike) because they actually have a reasonable bike fee ($50), as opposed to most other airlines’ crazy and arbitrary fees.

Nice going, Tom! Hopefully this will spread over time. Anything is a start!

[Though the unintended message: leave Portland during PP ….and bikes fly free.]

Southwest may woo me away from Alaska yet.

It may not be a sales gimmick but it just won my business! Hooray Tom!

It’s clearly a marketing promotion. They made a flyer for it.

This is a great promotion. I only wish the City and the various tourism groups would embrace Pedalpalooza as the selling point it is. Portland isn’t much of a tourist destination, but it could be.

We all know people who come to town especially for Pedalpalooza. With a little help, it could be a much more significant attraction for out-or-town visitors than it is.

Frontier Airlines recently lowered the fee for bikes to $20 plus any over weight charges.

This is a permanent change not just a promotional rate.

Now if we could only get Amtrak to waive fees as well. (Not holding my breath!)

Now if we could only get Amtrak to accept more than six bikes per train! The bike fee on Amtrak is nominal and I’m happy to pay it (it’s like, five bucks – a STEAL!), but the fact almost every time I try to book an Amtrak trip, the bike slots have already been nabbed, is really frustrating.

I’d love to see Amtrak allow more than 6 bikes on the Cascades. There’s generally extra room in the baggage car. They’re pretty adverse to any more than the 6 bikes on hooks, whether boxed or unboxed.

But I was also thinking about the other long distance Amtrak trains that serve Portland like the Empire Builder and the Coast Starlight–trains that require bikes to be boxed. It would be nice to see them waive fees for that, or even allow for unboxed bikes!

Great story – thanks for posting Jonathan — and good going Tom!

Hopefully before the flyers are put out, they will correct the spelling of Pedalpalooza. Also, SWA always spells LUV in all caps.

I’m excited about this. Hopefully it’ll become an annual thing with a little more publicity.

Adding to this airport thread, has anyone used the tire pump at the airport? I had to use it and it was first of all really hard to find (at the Travel Oregon desk). Secondly, It’s a really small hand pump which is hard to inflate tires to pressure with. The person at the desk said there was no space for anything bigger/better.

This is awesome! Nice one Mr. Labonty and Southwest – I hope this is the start of a trend.