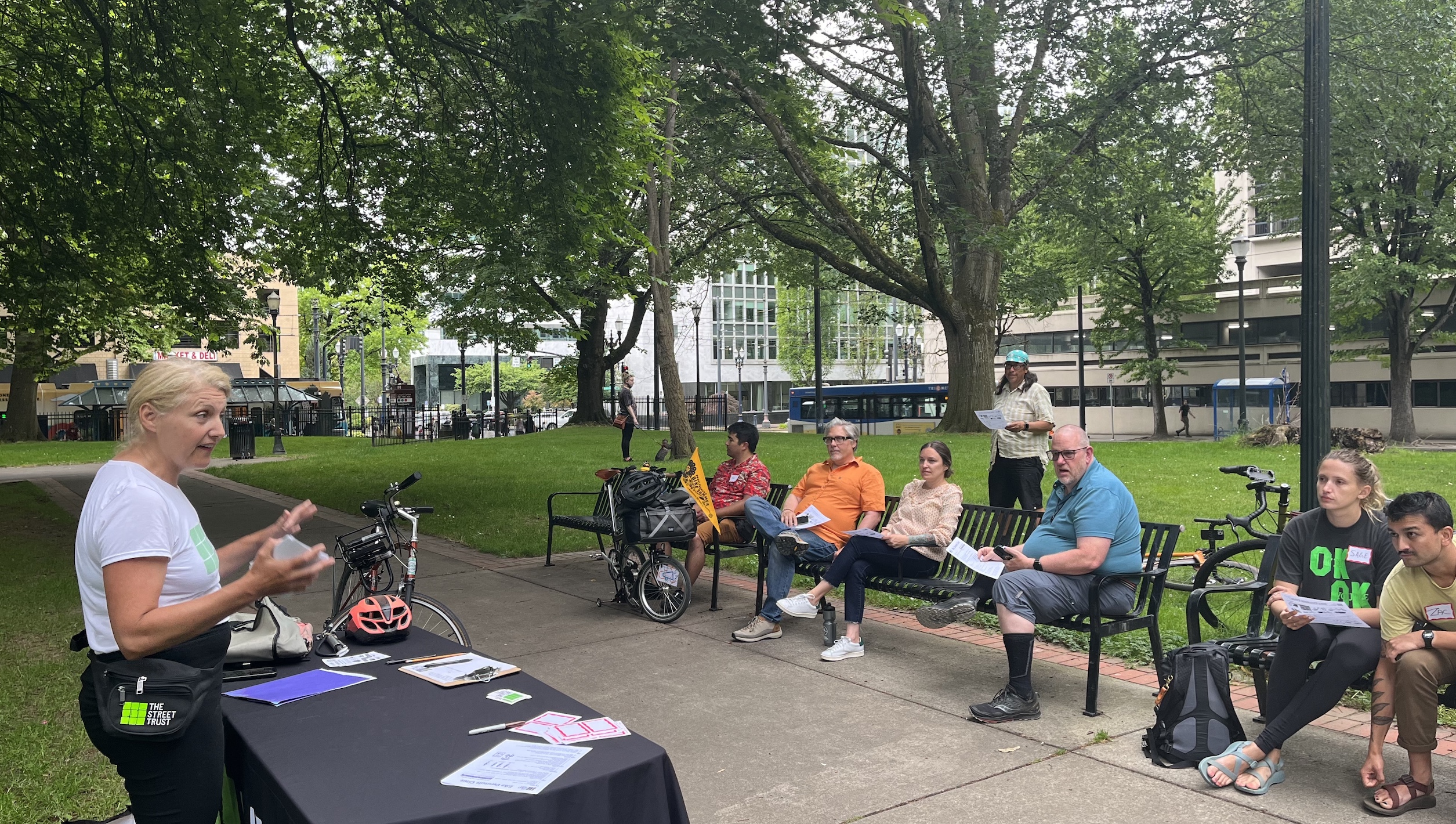 Portland-based nonprofit The Street Trust wants to make bike commuters out of as many people as possible, and through their clinics, wannabe commuters can get a rundown of what they need to know to start biking in Portland.

Yesterday evening, I rode to Holladay Park to attend a commuting workshop led by The Street Trust’s Community Engagement Manager (and local carfree icon) Madi Carlson. I was surprised by the range of Portland bike experience from attendees – while there were several people who are very new to the local bike scene, many people who joined the group are very regular Portland cyclists.

Attendee Matt Browning is on the far side of that spectrum – he just moved to Portland from Salt Lake City two weeks ago. Browning was excited to move to Portland, where it’s feasible and popular to commute by bike, so he could exchange his long, arduous driving commute for a short bike trip from the the Hollywood neighborhood to the Lloyd District. But he thought he could use a refresher course, so after seeing this clinic on the calendar, he decided to check it out as his first bike event as a Portlander.

“I didn’t bike regularly in Salt Lake City,” Browning told me. “Hearing the information about bike etiquette [at The Street Trust clinic] was really helpful.”

For the more experienced bike commuters in the group, this workshop was a chance to show support to people newer to hitting the pavement by bike. And, hey – who says you can’t learn new tricks?

“Even being a ‘seasoned’ commuter, there is always a new tip you can pick up,” Armando Luna, one of Portland’s most prolific cyclists, told me. “Most helpful is hearing what other riders do for their commutes. You might find out about bike lockers in your area, or a repair station you didn’t know was there. Bike info is always changing and it’s best to get it from the folks who are biking.”

My personal bike skills have mostly been acquired by trial-and-error, a tactic that certainly has its place but is best supplemented by at least a little bit of “formal” learning. But even though I have developed a method for getting around the city that works well for me, I agree that there’s always something new to pick up. If I’d heard Carlson’s advice for crossing rails perpendicularly, for instance, I might not have wiped out a few weeks ago after getting my tire stuck in the MAX tracks.

Other topics covered at the clinic included bike laws (lights aren’t just a safety precaution – they’re legally required), etiquette (use hand signals and yield to pedestrians), gear suggestions and more. It was especially helpful to hear about some of the infrastructure you might see riding around Portland, some of which took me quite a while to figure out how to use. For instance, Carlson discussed Copenhagen-style two-stage left turn boxes, which are pretty unique to Portland in North America. These help people riding bikes so they can turn left at a signal without having “take the lane” and share space with car traffic. If you see one on your route, it’s nice to know what it is and how to use it!

Carlson told me she thinks these introductory clinics are a way to inform people about the benefits and how-tos of cycling in an approachable way, and she hopes they can help some people make the switch from driving cars to work.

“In the face of rising gas prices and truncated transit service, bicycle commuting offers an affordable, accessible travel solution for all types of people. We want to support them in learning more about how to enjoy safe and comfortable bike commuting in all seasons,” Carlson said.

You don’t always get a chance to learn this directly, and when there’s an opportunity to get a lesson from the legendary Madi Carlson, I recommend you take it. Keep an eye on The Street Trust’s calendar for announcements on the next clinic.

And check out our guide to cycling in Portland from a few months ago. No gatekeepers allowed here – anyone can start biking in Portland, and the more the merrier. There are many people and groups who would love to be your guides.

Speaking of guides, browse the handy leaflets created by The Street Below for your own primer/refresher course. 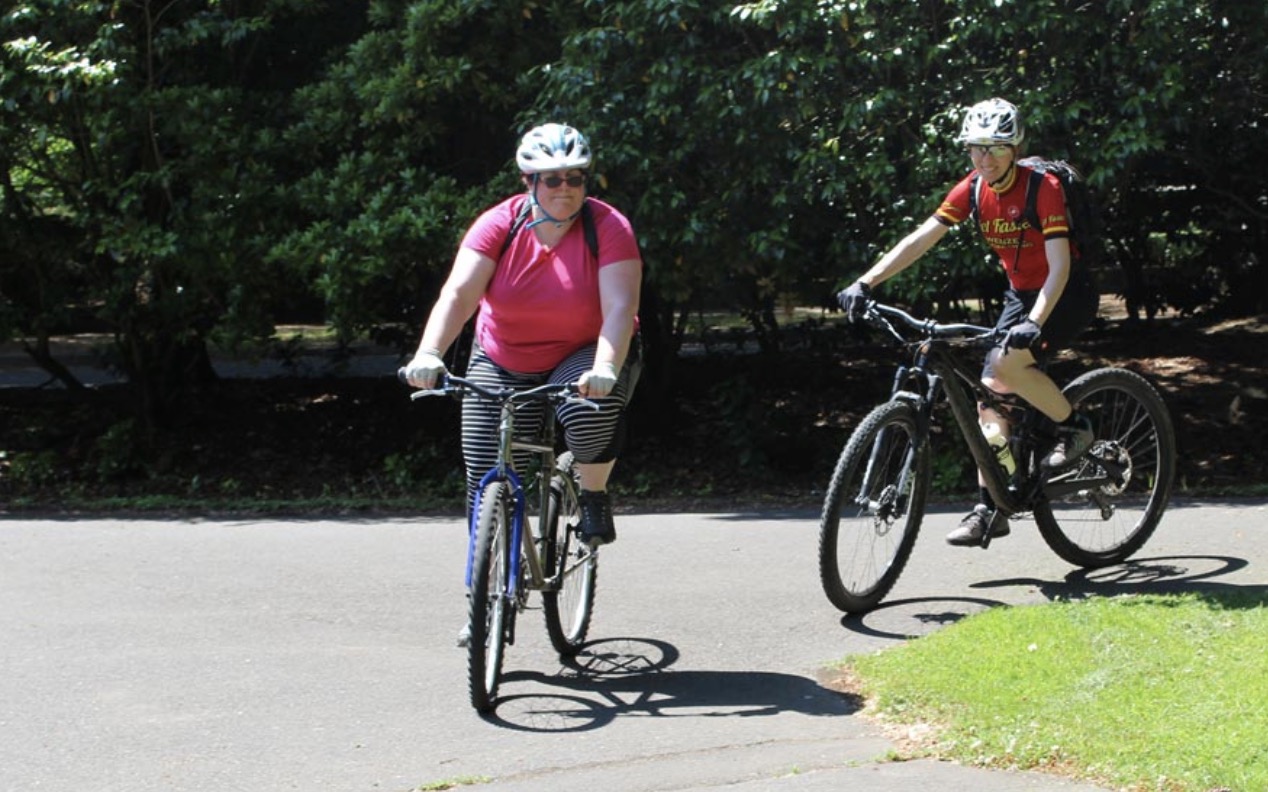 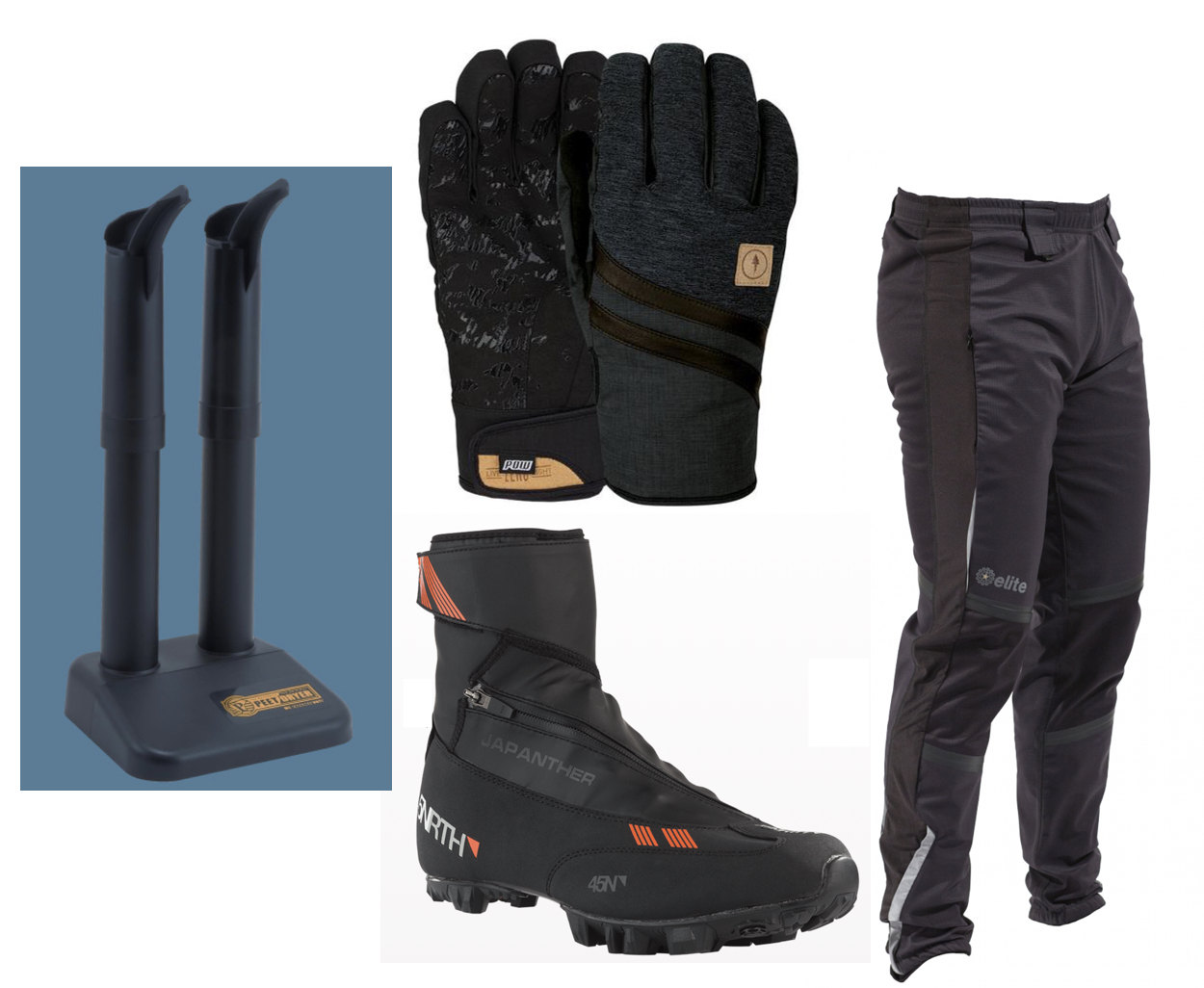 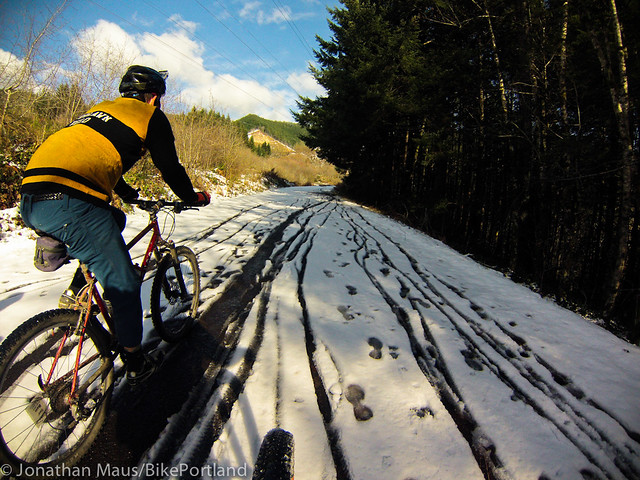 The weather outside is frightful, but with the right gear and wisdom it can be delightful. This treasure trove of winter weather riding advice was inspired by an email thread from the hardy folks of “Unpaved” — a Google Group and Ride With GPS club that share and ride adventurous routes. It was originally posted in this form by Our Mother The Mountain and has been reprinted here with their permission. (Keep in mind, this advice is mostly tailored toward for big adventure rides, as opposed to commuting a short distance to work.)
___

Winter riding in the Pacific Northwest can be a uniquely challenging affair. Whether exploring deep National Forest gravel roads, churning out paved base mileage, pounding grimy singletrack, or simply commuting — there are a few universal truths that will hopefully take a bit of the adversity out of the season. Initially compiled by Ryan Francesconi, the following list reflects the cumulative wisdom of the Unpaved community. 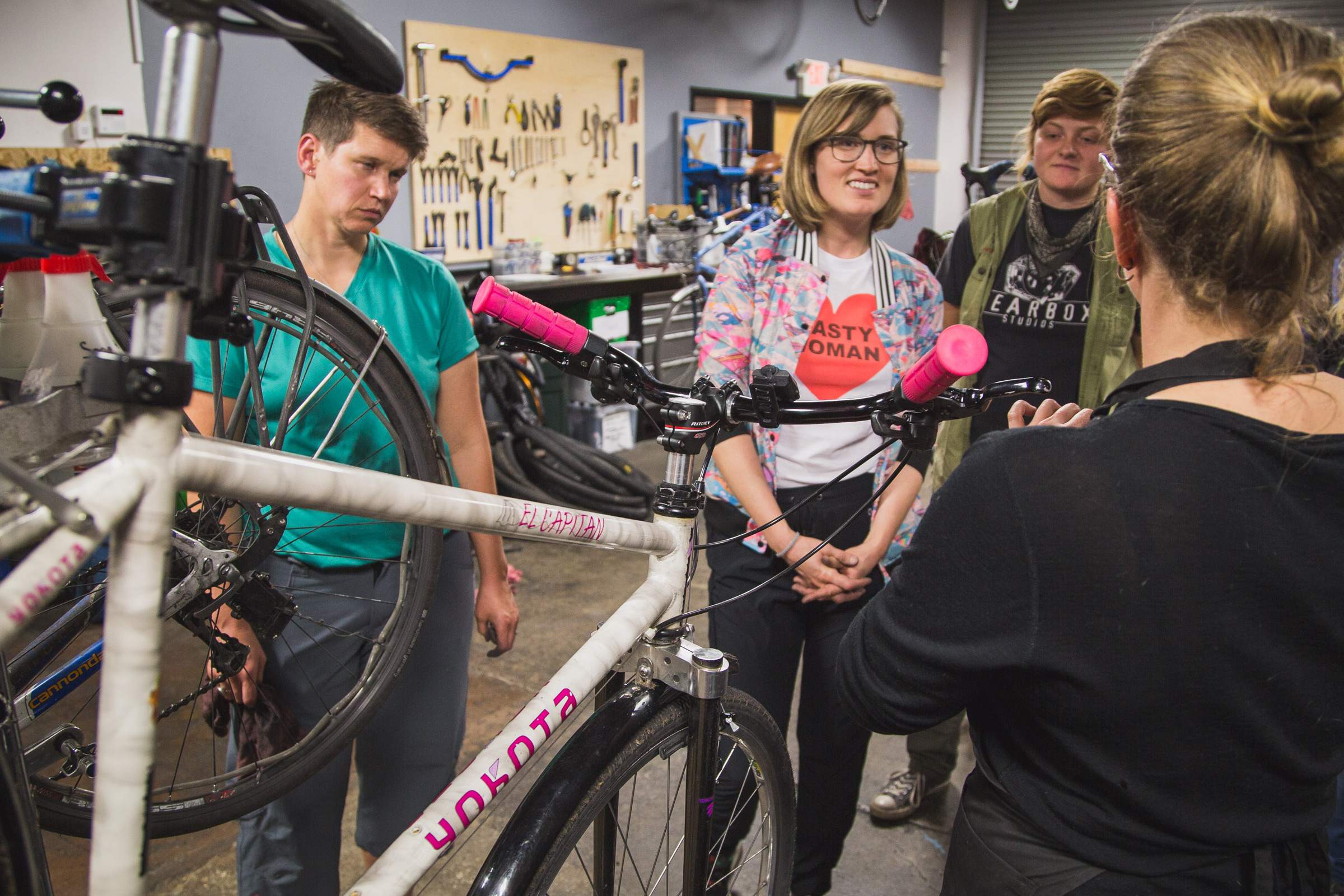 This is the latest from our Gal By Bike columnist Kate Johnson (formerly Kate Laudermilk). See past articles here.

A few weeks ago, five determined gals, including myself, joined together at Western Bikeworks in northwest Portland to learn a thing or two about our beloved steeds. The general consensus between us was that we were all tired of needing someone else to do bike repairs for us.

We wanted to empower ourselves — and Tori Bortman was going to show us how.

Bortman is the frank, to the point, direct, and yet entirely approachable owner of Gracie’s Wrench, a business that helps people “get intimate” with their bicycle. She’s a real no nonsense gal. “If I can do this, anyone can. I am not mechanically inclined,” she assured us. I wasn’t at all surprised to find that she grew up in the Chicagoland area just like myself. We’re a unique and hearty bunch with can-do attitudes. The idea that becoming a master mechanic is within reach for anyone was very prominent in her workshop. Making mistakes was encouraged and celebrated and the needs of the those attending far outweighed any prior written syllabus. 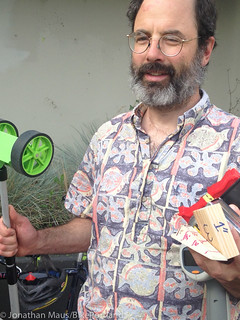 Ted Buehler and his tools of
the citizen activist trade.
(Photo © J. Maus/BikePortland)

An unsafe street that isn’t being improved can be one of the most frustrating experiences in city life. One of Portland’s most thoughtful safety activists has some smart ideas on what to do next.

This exchange in our comments section came from a story this summer about a hit-and-run that injured a nine-year-old girl at North Bryant and Borthwick, on a neighborhood greenway that’s supposed to be free of fast-moving auto traffic but which was, according to a reader who once lived there, built to invite fast speeds. Several readers expressed frustration with the difficulty of getting police to do speed enforcement in a spot like this; one, Kevin Wagoner, said he’s tried calling the city’s official 503-823-SAFE line in a similar situation to no avail.

This guest article was written by Tori Bortman, owner and operator of Gracie’s Wrench, which offers private and group bike maintenance clinics (and more). Tori wrote a similar article for us last spring, but this one’s new and improved! 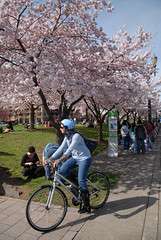 Thanks to El Nino, spring has officially sprung a bit early this year. Not that I’m complaining. More long weekend rides, less getting caught in torrential downpours — I’m all for it.

You may be ready for spring… but is your bike?

If you haven’t taken the time this winter to give your bicycle a thorough re-vamp, now is the time. That doesn’t mean you have to go running to the shop. Start slow and bring your steed back to life with some simple steps that will make your next ride practically dreamy.

Perhaps BikeCraft yielded the perfect holiday gifts for every bike lover in your life. But if you need that one last perfect item, check out the book suggestions below — or browse through our Bookstore for even more inspiration.

December 21st is your deadline for shipping via priority mail; or if you’re in the Portland area, you can buy books online here and pick them up at the Powell’s location of your choice.

Several readers have emailed me about this great project from Instructables. A group of students from MIT have created a system that uses a turning bike wheel to charge USB devices. It’s not quite a consumer-ready product yet, but it’s definitely got some promise.

Editor’s Note: This article was written by guest author Tori Bortman. Tori is very active in the local bike scene. She’s a co-host of the KBOO Bike Show, a promoter of bike polo and women-only alleycats, and she’s the proprietor of her own bike mechanic training business, Gracie’s Wrench (which we reported about two years ago and was featured in The Oregonian this past Sunday).

Today she shares a few tips about how to coax your battered bike (and psyche) out of the winter doldrums and into the sunshine ahead!