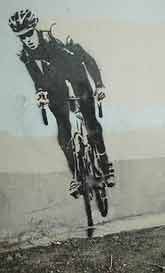 Mike expressed that he thought it was “a great stencil” and that, despite usual policy that calls for more immediate removal of graffiti, his crews wrestled with this decision for weeks. Here’s more of what he said: END_OF_DOCUMENT_TOKEN_TO_BE_REPLACED This painting of the late Brett Jarolimek
has been covered over by maintenance crews.

I just heard from a reader that maintenance crews (from ODOT) have painted over the stencil of Brett Jarolimek that was on the underpass at the intersection of N. Interstate and Greeley.

This doesn’t come as a complete surprise (after all, it was technically vandalism), but in a way I feel it’s too bad that it could not have been saved. END_OF_DOCUMENT_TOKEN_TO_BE_REPLACED Chris King has announced a $5,000 donation to the fund and has pledged another $5,000 in additional matching funds. (The Bike Gallery already plans to match first-year contributions up to $10,000). END_OF_DOCUMENT_TOKEN_TO_BE_REPLACED 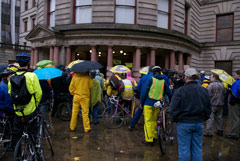 There are rides being led to the rally from various locations throughout the city. Here is the list:
END_OF_DOCUMENT_TOKEN_TO_BE_REPLACED At the intersection of
N. Interstate and Greeley.
(Photo © Jonathan Maus)

Nearly a month passed since we lost Brett Jarolimek, but signs of his life and actions spurred by his passing continue.

The Bike Gallery (where Brett worked) has established a memorial fund in his honor. The fund will,

“support the cause of bicycle safety through strategic partnerships and direct support of projects intended to 1) enhance motorist awareness and education, 2) enhance the awareness, visibility and education of bicyclists, and 3) enable bicycle safety infrastructure projects on a selected basis. This will include funding of grassroots projects initiated by individuals in the community.”

END_OF_DOCUMENT_TOKEN_TO_BE_REPLACED

No more right turns at Greeley: “I don’t want another tragedy”

Calling the intersection, “inherently dangerous” City Commissioner of Transportation Sam Adams had PDOT crews close the right-turn section of N. Greeley Avenue that has claimed two victims in as many weeks. END_OF_DOCUMENT_TOKEN_TO_BE_REPLACED

A service to pay tribute to the life of Brett Jarolimek and a memorial ride through Forest Park has been planned.

Memorial ride: Meet at NW Thurman St. entrance to Forest Park at 4:30. Ride starts at 5:00. We will ride out and back on Leif Erickson Drive. This is a gravel road that might be muddy and impassable with narrow, slick tires. Equip yourself accordingly.

Memorial service: The event is open to the public and will be held at 6:30 pm in the commons area of Pacific Northwest College of Art (1241 NW Johnson), where Jarolimek graduated in 2003.

Crusaders remember Brett with silence, spirit, and a good party Also speaking before a memorial lap was Bike Gallery’s Kris Schamp. He said,

“The Halloween Cross was one of Brett’s favorites, we’ll miss him here…but he’d want us to ride on, race on, and have fun while we’re at it.”

END_OF_DOCUMENT_TOKEN_TO_BE_REPLACED

Trucker’s problems should lead to reforms

As detailed yesterday by the Oregonian (and later discussed on this site), the driver of the AGG Enterprises garbage truck that killed Brett Jarolimek last week had a slew of speeding infractions on his record.

Now, I’ve learned that speeding was the least of his problems.

According to my research and to sources who have requested to remain anonymous, the truck driver’s “checkered past” includes: END_OF_DOCUMENT_TOKEN_TO_BE_REPLACED A service to pay tribute to the life of Brett Jarolimek has been scheduled for Monday (10/29).

The event is open to the public and will be held at 6:30 pm in the commons area of Pacific Northwest College of Art (1241 NW Johnson), where Jarolimek graduated in 2003.

Organizers say the service will be a place for people to get together and share their thoughts and memories of Brett.

This has been a very difficult time for PNCA. The small, close-knit school was already coping with the loss of Tracey Sparling, who was a student at the time of her death on October 11th. END_OF_DOCUMENT_TOKEN_TO_BE_REPLACED