Bike Gallery is the official sponsor of 2007 Cyclocross coverage on BikePortland.org 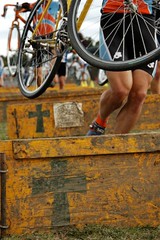 Welcome to Special Coverage of the 2007 cyclocross season. I’m racing the entire Cross Crusade series and sharing reports and photos each week. Photo galleries are listed below, followed by my story archives.

I made it out to Portland International Raceway yesterday to check out the US Gran Prix of Cyclocross.

The racing action, large crowds, and good times could not be stopped despite a barrage of wild weather that included snow flurries, strong winds, and cold rain.

Going deep in a quest for The Grail

Steven Hunter dove deep in the
Willamette to uncover his piece
of The Grail.
(Photos courtesy Brian Ellin)

So much of what makes the Cross Crusade a success has little to do with racing bikes. Take for example the Quest for The Grail.

The Quest is a contest dreamed up by Crusade director Brad Ross, and event founder Rick Potestio. The stakes? Prizes, bragging rights, and one lucky winner will get a round-trip ticket to the Cyclocross World Championships in Treviso, Italy.

The rules are simple: follow the trail on the map (below), when you see the orange “X” you begin searching nearby for “a fragment of an ancient bike or even The Grail itself.” Each participant can only collect one fragment and then they must bring it to the Cross Crusade Awards Party (this Sunday) to find out if their fragment is in fact The Grail. END_OF_DOCUMENT_TOKEN_TO_BE_REPLACED

This weekend, cyclocross racing will put Portland in the national cycling spotlight when the finale of U.S. Gran Prix of Cyclocross comes to town. END_OF_DOCUMENT_TOKEN_TO_BE_REPLACED

A photo essay that documents the American cyclocross scene is coming to Portland.

Washed in the Mud: US Cyclcross Portraits is the work of Santa Cruz, California-based filmmaker and photographer Brian Vernor. Vernor, who’s best known for his work on “Pure, Sweet Hell”, traveled with the U.S. Gran Prix of Cyclocross last season documenting racers, fans, and insiders for a distinctive, off-the-course look at the sport.

Here’s more about the show from Vernor: END_OF_DOCUMENT_TOKEN_TO_BE_REPLACED

END_OF_DOCUMENT_TOKEN_TO_BE_REPLACED

Tomorrow is the final stop in the 2007 River City Bicycles Cross Crusade.

The event will be held at Hillsboro Stadium and with the rain we’ve had the past few days, the race is sure to be muddy and challenging.

The event will also be the official Oregon Bicycle Racing Association (OBRA) State Championships. Race winners from each category will be crowned with the distinction of being the fastest ‘cross racers in Oregon.

Last year, the Hillsboro course was one of the muddiest all year, and tomorrow should be no different. Check out my photo gallery and report from that event as a preview to what might be in store for tomorrow. END_OF_DOCUMENT_TOKEN_TO_BE_REPLACED

If you’re curious what you missed, the photo at right should give you a clue. Then there’s this snip from the official press release put out by the Oregon Bicycle Racing Association (OBRA): END_OF_DOCUMENT_TOKEN_TO_BE_REPLACED

Organizer Dani Dance has some advice for would-be competitors and spectators. Below, she shares a few easy steps to convert your bike to a single speed, issues a call to all the ladies, and offers some encouragement for spectators and hecklers. END_OF_DOCUMENT_TOKEN_TO_BE_REPLACED

END_OF_DOCUMENT_TOKEN_TO_BE_REPLACED

This is what Portland cyclocross is all about

Not only does the video capture the zany costumes, racing action, and characters of the Crusade, but (as usual) Dan created and performed an original song to go with it (accompanied by PDOT’s Greg Raisman on harmonica!).

Watch the video via YouTube below, or go to CrankMyChain.com for a higher quality version. END_OF_DOCUMENT_TOKEN_TO_BE_REPLACED