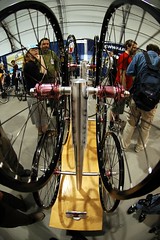 Chris King has announced a $5,000 donation to the fund and has pledged another $5,000 in additional matching funds. (The Bike Gallery already plans to match first-year contributions up to $10,000).

Diane Citrin, the human resources manager at King says, “Everyone at Chris King is very proud to be able to join the community…and do something positive in Brett’s memory.” 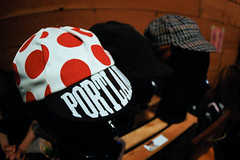 The “King of the Mountain” cycling cap
from Little Package.
(Photo © Jonathan Maus)

On a smaller scale, a local cap maker is donating all proceeds from a special edition cycling cap to the Brett Jarolimek Fund.

Handmade in Portland by Caroline (she asked to not mention her last name), the cap is inspired by the polka-dot jersey that goes to the best climber in the Tour de France.

(Caroline was a friend of Brett’s and he was known among friends as a very strong climber.)

With all the ideas and energy that’s been swirling around lately, I can’t wait to see what sort of projects and initiatives are born from this fund.

For more information about the Brett Jarolimek Fund, go here.

This is very good news about a very important cause. I\’ll support any effort to help build Brett\’s memorial fund in any way possible. Thanks for the story, Jonathan, and thank you, Bike Gallery team and friends, for making this happen.

Yes, it\’s a good way to turn grief into action.