Here’s how to follow the Christmas Ships Parade by bike 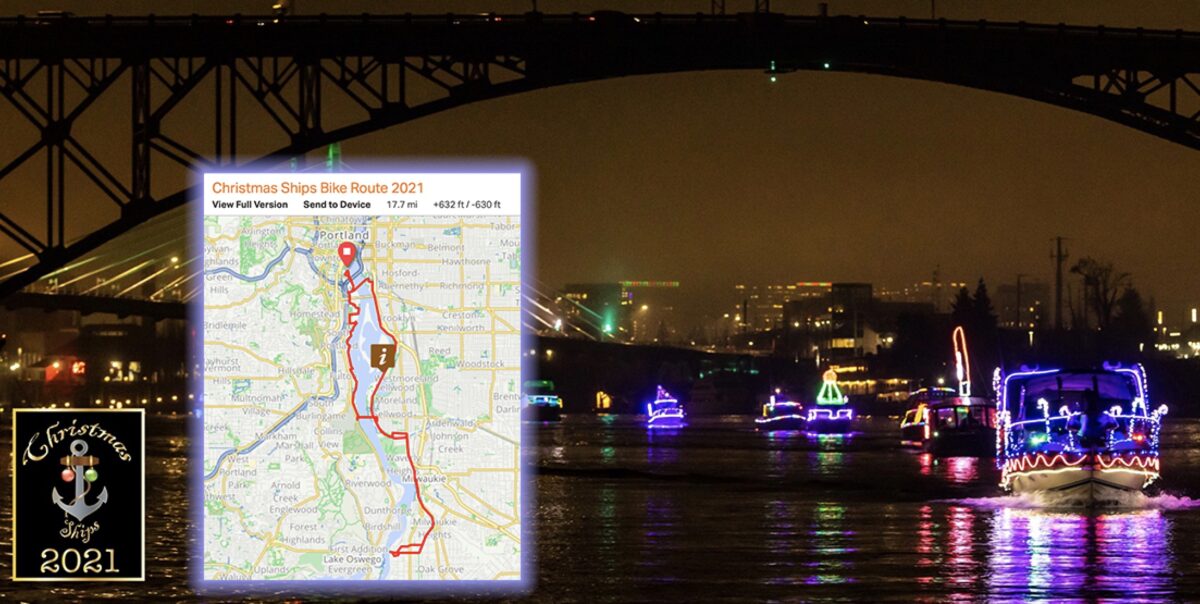 The Christmas Ships Parade has been a Portland tradition since 1954. And what’s not to love? It’s a bunch of fun folks (they even have a website) who deck out their boats with all types of holiday lights and cruise the Willamette to the delight of all who see them. Most spectators stand in one spot and watch them go by. But why not see them for much longer as you ride your bike along the river beside the ships? 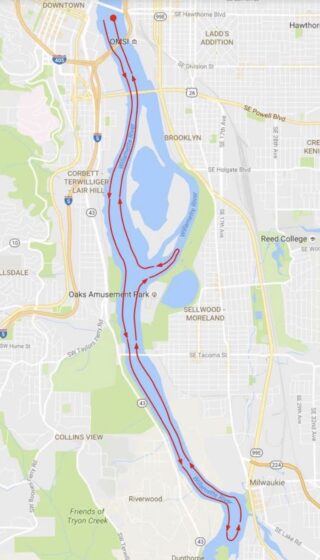 For years I’ve ridden my decorated bike (which you might have seen on the recent Bike the Lights ride) from Riverplace Marina to Milwaukie at the same time the Christmas Ships are making that same journey on the river. The ships cruise at about 7 mph, so it’s easy to ride with them on the Willamette Greenway Bike Path. There are pedestrians watching the ships as well, but in this area, they are somewhat dispersed and standing off the path to be closer to the river. In recent years, I’ve added a speaker to my bike that plays holiday music, and people will often turn around and clap or cheer as I ride by.

According to the Christmas Ships schedule, there are six evenings this year on which you can do this ride to follow the ships. On three of those nights (December 15, 17, and 20) the ships depart at 7:00 pm to Milwaukie Bay Park, turn loops at the park, and return to Riverplace Marina on the same route. The other two nights (Dec. 10 and 18) follow a slightly different route.

On December 10th, the ships depart at 7:00 pm for Milwaukie, but on the journey back go by the Oregon Yacht Club. That’s the important part, as it means on their return the ships will cruise up Holgate Channel for a while before reversing course in the channel to go to the other side of Ross Island. The route up Holgate Channel places them directly opposite the new viewing platform at the culvert on the Springwater Corridor. This is the best place I’ve ever been to watch the ships. The Holgate Channel is rather narrow, so the ships pass close to the platform. And the area is a wildlife preserve with no utility lighting allowed, so the lighted ships really stand out in the surrounding darkness. To make sure you get to the Springwater platform in time, depart Milwaukie Bay Park while the ships are still turning loops.


On December 18th the parade leaves at 4:30 pm for Lake Oswego, passing Milwaukie along the way. This parade is the combined fleet, so instead of having just the Willamette Fleet, the Columbia Fleet joins in for double the number of ships. But note their return route will not include passing by the platform on the Springwater Corridor. On the 18th you can continue south from Milwaukie to Rivervilla Park which is another dark place to watch the ships go by. Leave Milwaukie quickly if you opt to do this, as the ships may get to Rivervilla faster than you can bike there if you depart at the same time. But if you do miss them, hang out at Rivervilla for a half hour, and they will sail by heading north from Lake Oswego.

To follow the ships, you should start the Ride with GPS route (above) while the ships are gathering out in the river at RiverPlace Marina. With the South Bond Ave Greenway there is now a clear view of the river all the way down to the Moody cycle track. When you get to Go By Bike and the Aerial Tram station, pass through the side streets over to the South Waterfront Greenway and another view of the river. From there it’s back to Moody and on to the Old Spaghetti Factory and the Willamette Greenway trail. This restaurant has a life-size Santa sleigh display to see as you loop around it. You’ll want to pause about half-way between Riverplace Marina and the Sellwood Bridge to see if the ship captains decide to turn loops in this area.

When you reach the boat ramp parking lot at Willamette Park you’ll be greeted by the sight of cars parked facing the river like they are at a drive-in movie. But in this instance the “movie” is the Christmas Ships going by. At the Sellwood Bridge you can ride on either the north or south sides and watch the ships pass directly underneath. From there it’s on to the new section of the Springwater Corridor and the 17th Ave Bike Path into Milwaukie. The Trolley Trail starts at Milwaukie Bay Park and that is the route to follow further south on the Lake Oswego night. Milwaukie Bay Park is where you’ll see the largest number of spectators, but they will be down close to the river and not on the Trolley Trail itself.

The round-trip distance on the Milwaukie nights is 14 miles returning to Riverplace Marina. You can reduce that to 7 miles by taking MAX from downtown Milwaukie. The Dec. 18 ride adds a few more miles to the route.

One last thing… I first rode this route in 2007, and it’s amazing the vast cycling improvements that have taken place since then. Anybody who has ever ridden in this area likely remembers the awful sidewalk riding once required along Macadam Ave and the narrow path on the old Sellwood Bridge with its intrusive lampposts. I started thinking about all the improvements that have been made, and BikePortland came in handy, as every bit of new and improved infrastructure along the route has been written about on this site. We really have a great historical resource here for all things bike that have happened in Portland in the last 17 years. For the Christmas Ships route, here are just some of the articles that have been written about its improvements in the order you encounter them while riding along.

New and improved bike infrastructure along the Christmas Ships route:

Have fun out there! Get more details and updates from The Christmas Ships via Facebook or Twitter.

Tom, you’re a gem — thank you for sharing this experience and knowledge!

Thanks, Tom! Appreciate the detailed recommendations.

Rode along with both fleets tonight but with this weather only to the sellwood bridge. Not hard to keep up with them by bike.