Approximate location of closure is around Cottonwood Bay, north and south of SW Hamilton Ct.

Portland Parks & Recreation plans to close a portion of the Willamette Greenway Trail starting tomorrow (June 5th). The closure will allow work crews to flatten out several sections where tree roots have caused bumps and cracks in the pavement across the path.

Parks says they’ve known about this uneven pavement for a while now, but they bumped up the timeline due to the upcoming four-month closure of the Springwater Corridor on the other side of the river. That closure begins July 1 is expected to route many people to the Willamette Greenway Trail as an alternate. In addition to the Springwater project, Parks also heard from concerned bicycle users who reported the bumps.

BikePortland subscriber David Stabler reported the problem and requested the repairs in a post on April 11th.

Parks said the 3-4 day closure will start at 8:00 am and last no later than 7:00 pm daily. Please note that you will not be allowed to pass through the work zone during that time. Parks suggests using the Sellwood, Tilikum or Hawthorne Bridges to get to the west side of the river. They should have signs up warning about the closure as of today (if they don’t, let me know and we’ll remind them).

UPDATE, 6/6: The map below was created by reader Paul Souders. It shows how to easily navigate around the closure:

Glad to hear PPR is doing what it can to make this route better during the Springwater Closure. Hopefully the 19th ave Greenway (the alternate route on the east side) will also be ready. I just emailed the PM at PBOT – they are racing to get it done but there’s a chance it won’t be striped in time (meaning the beacons for difficult crossing will be off as well).

I doubt we’ll need to reroute to the east side to avoid this. You can probably bypass the work area (from North to South) by taking Landing Drive from Hamilton to the unnamed path just past the Oxbow 49 building. (It connects to the Greenway trail by the beaver statue.)

When critical roadways (highways, freeways) need to be closed for work, the work is done at night so that the closure impacts as few people as possible. Why is this not the norm for bike paths? Oh yeah, bikes are at the bottom of the priority pyramid.

I woke up being loaded into an ambulance Friday afternoon after hitting some similar features on the Fanno Creek trail so this is good to see. Hopefully it didn’t take someone breaking bones in their face and hand to finally bring it about… still waiting to hear back if Tigard and THPRD will do something about Fanno Creek out here on westside.

great news, I just rode this on Sunday and made a note to self to complain to Parks about how unsafe it is. Thanks to David S. for making the effort to report this. My impression is that agencies like Parks/PBOT/ODOT are often complaint-driven; if you put them on notice of a safety hazard it obviates the legal protection of plausible deniability (“we didn’t know”).

I rode this a couple weeks ago and noticed the path is in pretty bad shape, so glad to hear it’s getting fixed.

Agree with axoplasm that Landing Drive is a suitable, reasonably low-traffic (and potentially more direct) alternate.

Rode through there last night. Looks like they were doing full excavation, not just grinding them down. SB I was able to get past the Tesla service station and the Kelly Services building before finding the closure, You could save a little time from SoWa, by just taking the Moody trail instead of going around Spaghetti Factory and back to Moody. Also heating south be ready to shift into a very low gear. The hill on SW Hamilton while very short is also VERY steep up to SW Landing. From there I was able to take the first reconnect to the greenway on the left after the new Apartment building.

UPDATE, 6/6: The map below was created by reader Paul Souders. It shows how to easily navigate around the closure: 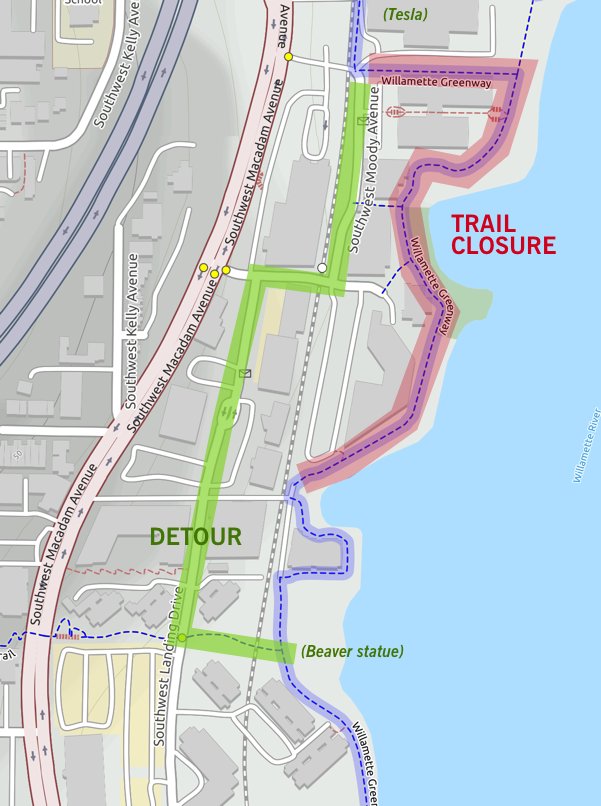 wow. I’ve avoided this trail for about 10 years due to this issue. I’m glad to see it’s finally getting some attention.

I rode through there today and figured out that very detour, thanks to the omniscient Googles.

Rode this trail this morning and it’s all done, fyi…