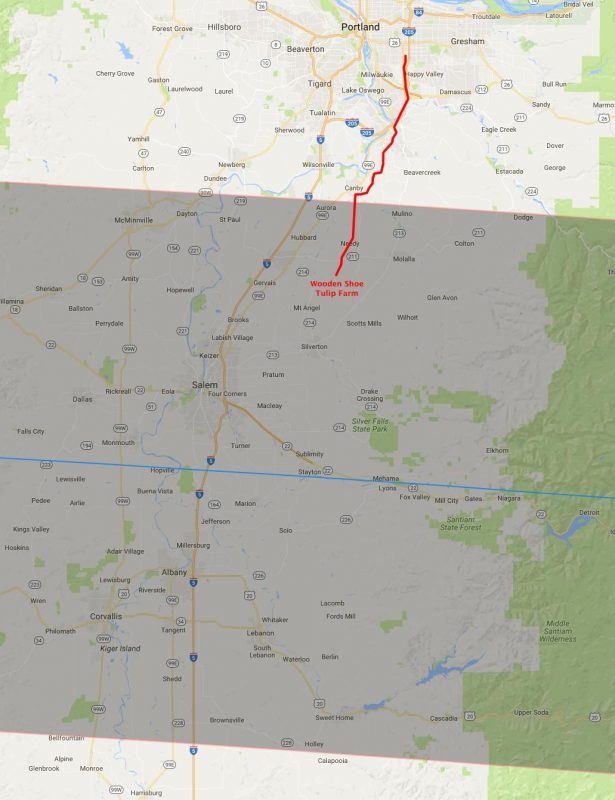 Getting to the tulip farm.

The tulip farm offers tent camping for $20 a night with up to four people in each site. The annual Wooden Shoe Tulip Festival is going on right now, so last week a few of us rode down there to check things out. This paved rural route is pleasant enough, and was even entirely devoid of cars for a stretch of several miles South of Lone Elder. But things changed dramatically a few blocks from the festival when we turned onto S Meridian Rd – the main automobile route to get to the tulip farm. Cars were backed up well before our turn onto the road, but we were able to merge with traffic and carefully ride to the right of the jam to bypass it.

This may be a harbinger of conditions the morning of August 21, as people statewide converge on the zone of totality. No one can say right now what traffic conditions will be like for this event, but it’s possible all the roads in the area will be jammed with cars. So it’s safer to go the day before and camp overnight to experience the eclipse the following morning. You might think Oregon will be no different for crowds than the other 11 states the total eclipse passes through, but that’s not the case due to weather probabilities. Oregon is generally sunny in August, and is the state most likely to have clear weather for the eclipse. Popular eclipse sites like GreatAmericanEclipse.com list Oregon as their top state for viewing. The proximity of Portland International Airport will also make Oregon a popular destination for travelers from abroad. Oregon has been so popular that Rainbow Symphony makes commemorative eclipse viewing glasses for Oregon, but not for any other individual state.

The total eclipse lasts that longest at the center of the path of totality, but the difference is not that great compared to the position of the Wooden Shoe Tulip Farm. At the farm, totality will last for 1 minute, 22 seconds starting at 10:17 AM, while at Stayton, OR, right in the middle, the duration is exactly 2 minutes. But reaching Stayton would require another 25 miles of pedaling on what will likely be roads with increasing traffic.

So what if Oregon turns out to be cloudy the morning of August 21? Clouds over the entire state will be a problem, but if the cloudiness is just in the Willamette Valley, the solution will be to get in the clear on the East side of the Cascades. Pay close attention to the forecast leading up to eclipse day and plan accordingly. Madras, OR would be the best place to cycle to, and is about 115 miles from central Portland following Hwy 26 – the most direct route, but also the busiest. That riding distance goes up to 130 miles following the more rural route to Madras through Ripplebrook. Madras is planning big for the eclipse with Oregon SOLARFEST. There are a number of camping options available starting at $150 and going up. These are all 5 day camping sites. The festival does not offer camping for a single night, although you can stay for just one night while paying the 5-day price.

If you have any other suggestions for eclipse bike camping, please post them in the comments section below.

If I had a mountain bike and no kiddos, my plan would be to get down to Estacada over the weekend prior (take the bus, there’s no pleasant bike route by my definition of few cars) and then wander south on the national forest roads. Once you go over the bridge, it looks like you’d only have to go like a quarter-mile on SR 211 before you could turn off on side roads. From there, NF-45 looks like it will get one fairly far south. Then find a clearcut or mountaintop with a view, and camp there.

That’s my plan. If weather cooperates, I think camping somewhere around High Rock will be the ticket.

My husband and I biked this way on our tandem to the tulip farm once.

This is the most adorable thing I’ve heard today.

“No one can say right now what traffic conditions will be like for this event, but it’s possible all the roads in the area will be jammed with cars.”

Understatement of the year, I’m afraid.

Think of it as the anticipated Cascadia Subduction Zone quake, but in reverse.

As the date of the August 21 eclipse draws near, keep this important safety information in mind: You MUST use special eclipse safety glasses to view a partial eclipse and the partial phases of a total eclipse. To do otherwise is risking permanent eye damage and even blindness. The ONLY time it’s safe to look at a TOTAL eclipse without proper eye protection is during the very brief period of totality when the Sun is 100 percent blocked by the Moon. If you’re in a location where the eclipse won’t be total, there is NEVER a time when it’s safe to look with unprotected eyes. NEVER attempt to view an eclipse with an optical device (camera, binoculars, telescope) that doesn’t have a specially designed solar filter that fits snugly on the front end (the Sun side) of the device. Additionally, never attempt to view an eclipse with an optical device while wearing eclipse glasses; the focused light will destroy the glasses and enter and damage your eyes.

And, the only really safe glass for looking at an eclipse is shade 14 welding glass. Anything less, including those cheap cardboard glasses, you’re taking a big risk.

Seems like it would be easier just look at it through a digital device like a cell phone. A display screen isn’t going to burn anyone’s eyes out and can easily be positioned so there’s no risk of looking directly at the sun — particularly in selfie mode where the sun would actually be behind the person viewing it

I do not think I would want to be on a bike on any Willamette Valley farm roads within a day before or after this event, given the likely tsunami of cars washing over them.

Do any of these highways have shoulders? We don’t like to ride in the line, if possible. And with expected congestion, it would actually be kind of nice to ride the shoulder while cars are traveling at slower speeds than the norm.

Some of the highways in that area have shoulders, but most of the minor roads – which are usually preferred by biking, but will become jammed with cars – do not have shoulders.

Good lord. Please do not tell people to ride on 26 east of Mt. Hood. The are stretches where the shoulder is just a foot or two wide, and traffic is fast and thick. It is a stressful drive. I would not even consider riding that stretch.

Mark
Reply to  Chris I

Maybe this will be the one fun day to ride 26 if the road is a parking lot and the shoulder is clear.

Useful map. Hmmm. I might need to make a special trip to Columbia or Charleston SC about then.

There are a number of buttes in the Olallie lake area that would offer great viewing. Sisi butte looks like a good spot since it’s a 3 mile hike or bike to the top, and the track is gated to cars.

The day before the eclipse sounds like a great day to ride away from the path of totality. The day of the eclipse or the next day seems like a good day to return. That way, I’ll be riding the opposite direction of the hordes of cars. Personally, I’d rather have a nice ride than see an eclipse. Clearly, others feel differently about it.

Anybody going to the trouble to watch should go to the trouble of making a journey east of the mountains. Predicting clear skies at 10:15 on the west side is shear folly, at the coast just plain nuts. I thought is was funny people spending $1000 for a hotel room in Lincoln City. Better prepare to watch it on CNN. Clear mornings at the beach are 1 in a 1000.

Ironically, this will be one of the few times I plan to drive even though roads are almost certain to be a total disaster and I think the highway riding won’t be that bad.

Any decent place that’s reasonably accessible is guaranteed to be crowded, but I doubt that will be an issue for anyone willing to walk a few miles away from the road (which doesn’t work great with a bike). My plan is to view from Mt. Jefferson or somewhere out in the desert if weather doesn’t cooperate.

It’s getting to the point where you can exit the road that will be the hard part. A million plus tourists, plus a 3 million Oregonians estimated, all cramming into areas that have only one or two major roads to get to them, and everyone thinking they have “the secret way” to get there. It’s going to be awful.

Laura A Murphy
Reply to  jh

I plan on riding from Cannon Beach to Lincoln City the day before the eclipse. I’m hoping to sail past the backed up traffic. If there are any cyclists who want to join me, I have a campsite in Otis Sunday night.New to the area and would like to meet fellow cyclists. E-mail at above address.