South Waterfront Greenway is open — Go check it out! 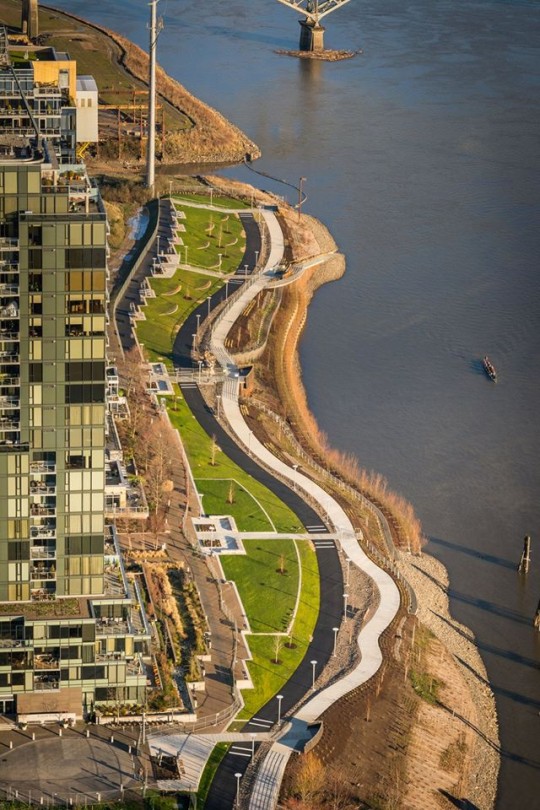 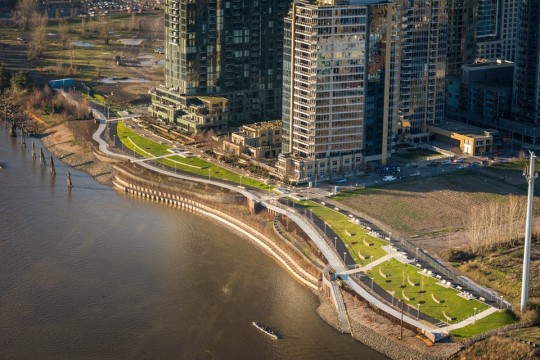 They describe it as, “a city park and valuable transportation corridor with wildlife habitat along the river’s edge – all on land reclaimed from industrial use.”

That’s a pretty impressive mouthful — but I’d quibble with the “valuable transportation corridor” part since it really doesn’t connect to anything yet.

But still. It’s beautiful to look at and very nice to ride. And it’s Portland’s best example of a separated biking and walking path. I shared a sneak peek back in March with more photos and background on the project. All that’s left to do is for you to go out and ride it.

How nice would it be if this style of separated bike path/walking path could be extended all the way from the Sellwood bridge to the Steel bridge? A girl can dream!

It WILL be very nice and it will happen.

I know Rome wasn’t built in a day, but uh, it doesn’t look like that path connects to anything.

yeah it kinda looks like the road to nowhere…from nowhere? i guess i should at least ride it before talking smack…

it is a road to nowhere… They have just built what they can right now. Once that area is fully built out, the path will connect to more stuff.

Jonathan, do you know if the city owns the parcel just south of the completed trail (to the “spaghetti factory”)? What about the land between Zidell and the Marquam?

nope. Zidell owns the land north of the Sellwood bridge and they’re in the process of leasing it all out to the highest bidder.

I think you mean the Ross Island Bridge?

Nice looking path and I’m happy for the separated walking and biking spaces. It would be great if there was also a car-free connection to the Moody cycle track to the northwest and the Willamette Greenway trail to the south.

are all the joggers using the bike path yet? that’s where they’ll be so they can jog on the soft asphalt…

on a side note, are cyclists required to give an audible signal when passing a pedestrian illegally using a bike path? the bike path isn’t technically a sidewalk, right? is it a bike lane and thus cyclists are required to use it even though it’s not near a road?

And we’re all going to grow old and die someday.

I’m not sure how many families with kids live on the South Waterfront but that sure looks like a nice place to learn how to ride a bike.

I learned to ride on the greenway path further south. Anyone know what the status is on the last two properties to the south? The biggest barrier would appear to be that Portland Spring building south of the Spaghetti Factory. Making that link would open up the entire waterfront to the south.

Hopefully this won’t be an isolated section of trail for too long. The gap between SW Lane and the Old Spaghetti Factory is all owned by a single group—Prometheus Properties—whose property extends to the water’s edge. They once had grand hopes for that site, and even got some towers through Design Review circa 2007. Obviously those plans were killed off by the recession. They’ve just recently had a Pre-Application Conference with the City to discuss developing Block 41, which is the site between the river, SW Lane, SW River Parkway and SW Abernethy. Before they can build this they will need to go through a Land Division process, which will presumably result in them dedicating a portion of their land along to the river to the City, similar to what exists between SW Gibbs and Lane. After that, the only remaining gap to the Willamette Greenway is behind the former Benz Springs building.

I’ve seen some prelim drawings showing it go around the slip Zidell uses to drop the barges in to the river, it will connect to a riverside trail that goes under the Tilikum Crossing (also connecting to it) and eventually to downtown portland.

At long last, South Waterfront finally gets something nice. /s

If Portland bridges were built like its bikeways, we’d still be using ferries.

There should a naming contest for the new gaps created by this isolated trail. I propose “Zidell” for the north and “Ross Island” for the south.

Whatever their names, these gaps will be stars in a constellation of legends like Naito, Sellwood, and OMSI, the gods of frustration, futility, and ineffectuality.

We were there today actually, by accident. nice path, nice benches, nice park….there actually are a lot of orphan paths like this on the river. Swan Island, NE Industrial District….by Ross Island Cement Plant. Over the course of a century a path will be built by the private sector….

It can be done only slightly faster through the public sector….or so it seems.

KGW news had a story about the new greenway, and sure enough, there’s a clueless woman walking a dog (on a long leash) on the bike path.

Let’s see how long till a homeless camp bike chop shop is set up.

This is really great! Vancouver’s Seawall took decades to make (and the work still continues). Any step is good. People come from all over the world to walk on our Seawall.
Re. people walking on the cycling path, you just ding your bell well before you approach them, then thank them when they move to the side. They get the point quickly.
Signage and some benches or bushes between the two paths help a lot with that too.

come back in 20 years, they’ll be bigger.

Is there signage? Or pavement markings? How are people supposed to know which path is for pedestrians and which is for bikes, and that they are not shared paths?

Markings!! Will never happen past the first time that someone decides to mark them. The city will issue a citation and make the markings removed. It would be an inconvenience to the walker/joggers with the earphones on while they are texting, waundering aimlessly like they do on the Esplanade.

Was down there the other day. Couple observations: first, there are benches along the “walk” path but none on the bike path. Why? I had to dismount and find a connecting segment (there aren’t that many) to sit down and eat my lunch…. or carry my bike up a flight of stairs (no gutter for rolling bikes up it?!). The whole separated aspect felt forced and strange. How much more greenspace could there have been if there was a single, shared path? Seems like a waste to me. Also saw two dog walkers on the “bike” part… the distinction is lost, pretty brass details are not getting the point across.