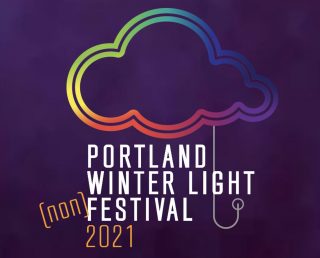 The Portland Winter Light Festival (PDXWLF) was first held in February 2016 with the idea that artistic light displays could provide relief from winter doldrums that settle in after the holiday season is over. The festival was founded by the Willamette Light Brigade, a nonprofit responsible for much of the festive lighting on Portland’s bridges. The Winter Light Festival has grown by leaps and bounds each year and recorded over 200,000 guests in 2020.

Last year’s fest was held right when pandemic started and restrictions against gatherings would soon follow. With Multnomah County currently in the Extreme Risk category, Winter Light Festival organizers had to come up with a new plan that wouldn’t result in a large mass of people in one spot.

The re-imagined event has been spread across the city, making it perfect to see by bike.

A portion of the PDXWLF can still be seen by walking. The official exhibit map features 20-plus exhibits downtown, fanning out from Pioneer Courthouse Square with seldom more than a 2-block walk between them. But in the rest of Portland, the exhibits are far more dispersed.

With that in mind, I’ve come up with two loop routes on Ride With GPS for the Southeast and North/Northeast sections of the city. The concept here is that the loop does not need a specific start and end point. You simply enter the loop at any random point and ride it in a clockwise direction to kick off navigation on your GPS device or phone. With Ride With GPS (a local company!), you can pull up the routes on their app, print cuesheets from the web, or download the route to a device.

The Southeast Route (above) is 19.3 miles long and includes all twelve light exhibits with southeast addresses, plus one that’s actually in northeast. That lone northeast exhibit is just to the North of E Burnside Street and having it on the Southeast Route avoids the hassle of having to cross Interstate 84 and Sullivan’s Gulch. One of the southeast exhibits (with live goats, no less!) is just inside the northern boundary of Milwaukie.

The North/Northeast Route is 15.6 miles long and includes fourteen exhibits with north and northeast addresses. This loop leaves off the light exhibit at Cathedral Park and another at Hayden Island, as those two would have required another 20 miles of riding. I also created a shorter N-NE route that leaves off the two eastern-most exhibits, reducing the length of the loop to just 10.2 miles.

So pick your route or routes and go riding this coming weekend and next! And be sure to light up both yourself and your bike. In keeping with the times, I found a $15 mask embedded with a small rechargeable battery and LEDs that glow in seven different colors and eleven selectable patterns. Please read the route tips on each ride page before heading out. That’s stuff normally covered by a ride leader, but this year you’re the leader of your own ride!

And note that the festival has been extended over two weeks: February 5-6 and February 12-13, from 6pm-10pm on all four evenings. Get all the details at PDXWLF.com.

— Tom Howe, nagitpo[at]gmail.com
— Get our headlines delivered to your inbox.
— Support this independent community media outlet with a one-time contribution or monthly subscription.

Dusting off my RideWithGPS account and going to give this a try!

This is fantastic. Thanks, Jonathan!

Albina Vision Trust will not be able to participate in PDXWLF due to the loss of their venue. I’ve modified the N-NE routes (long and short) so the routes now go up N Williams Ave after leaving the Convention Center area. If you have already downloaded the original route, it will still work, you just won’t find anything in the vicinity of N Dixon Street with Albina Vision being gone.

These Winter Light Festival bike routes look popular based on how many different people have viewed them on the Ride With GPS site. Here are the stats after Week 1 of the festival:

Would love to get some recognition for our artwork on the headline photo. I’m one of the makers of Low Key Lights by Loki Lighting and design (www.lokilightingdesign.com). This picture is of our work at Sunlan Lighting on Mississippi St (minus the pdxwlf sign). We also have a larger display downtown at AC Hotel. You can find our art for sale on our website.

Thanks for this great write up Tom! This event is definitely best suited for bikers. We spent the first night on foot and doing drive bys at some of the other spots. Hoping to make it out this week on bike before snowmagedon.