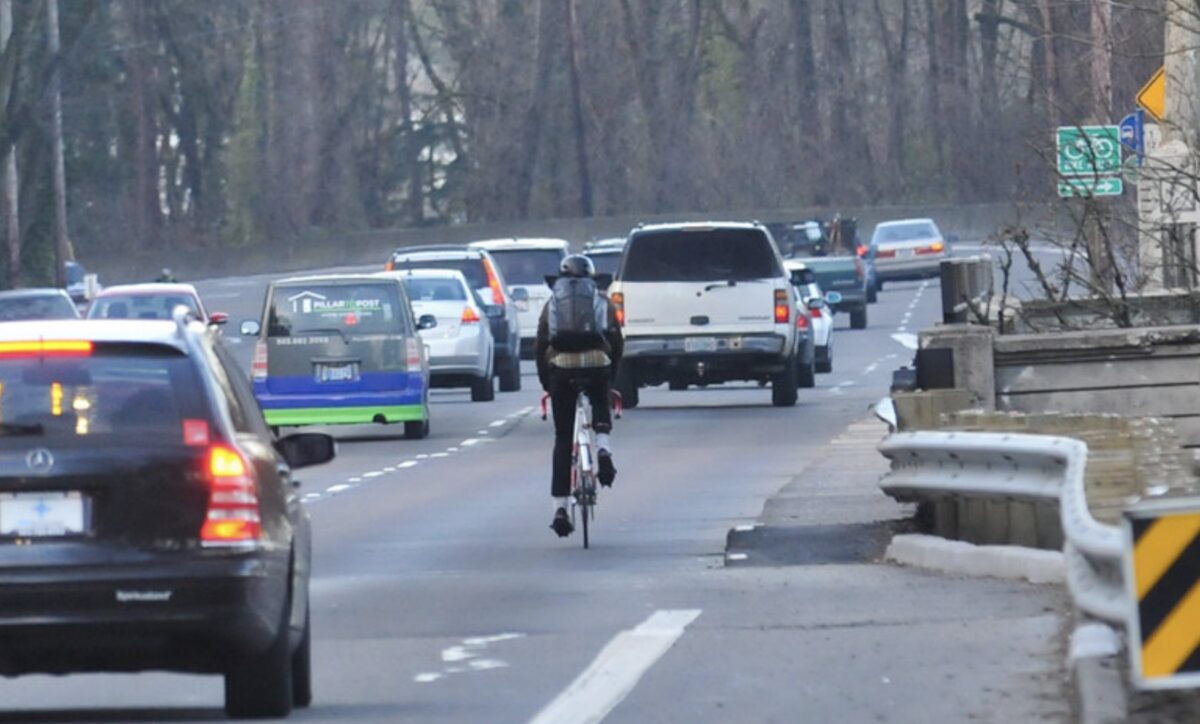 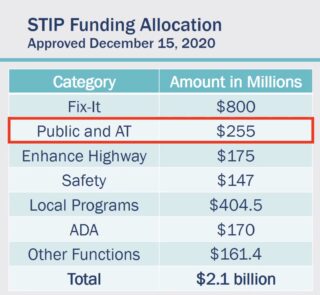 Let’s help them spend it wisely.

Many of you recall the big hullabaloo last December as advocates debated and lobbied the Oregon Transportation Commission around the passage of ODOT’s $2.1 billion Statewide Transportation Improvement Plan (STIP). When the dust finally settled on the 2024-2027 STIP commissioners approved a record $255 million for the Public and Active Transportation Program (formerly “Non-Highway) funding pot.

While not as much as advocates pushed for, the $255 million is 60% higher than the non-highway funding level in the current STIP. And $55 million of that total was set-aside for cycling and walking projects.

Now it’s time to tell ODOT what to spend that money on.

This past spring and summer ODOT staff analyzed safety and crash data and worked with regional advisory committees to come up with a list of candidate projects to build via the new Pedestrian and Bicycle Strategic Funding Program. The list was further refined by using a tool developed by ODOT’s Bicycle and Pedestrian Program called the Active Transportation Needs Inventory (ATNI). The ATNI helps establish project priority by taking into account factors (below) including Census demographic data, safety risks, existing conditions (Safe Routes to School needs, connectivity gaps, shoulder width, sidewalk quality), and so on. 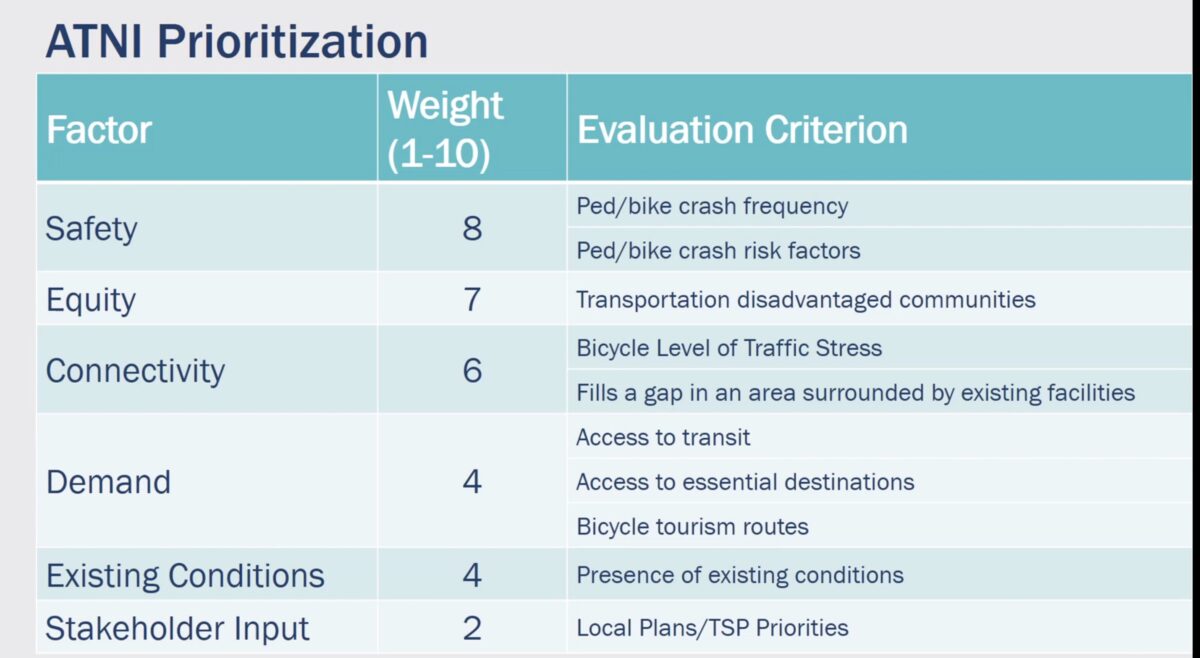 The type of projects that local agencies can spend this state funding on include: sidewalks, protected or buffered bike lanes, crosswalks, multiuse paths (as long as they parallel an ODOT highway), and lighting. 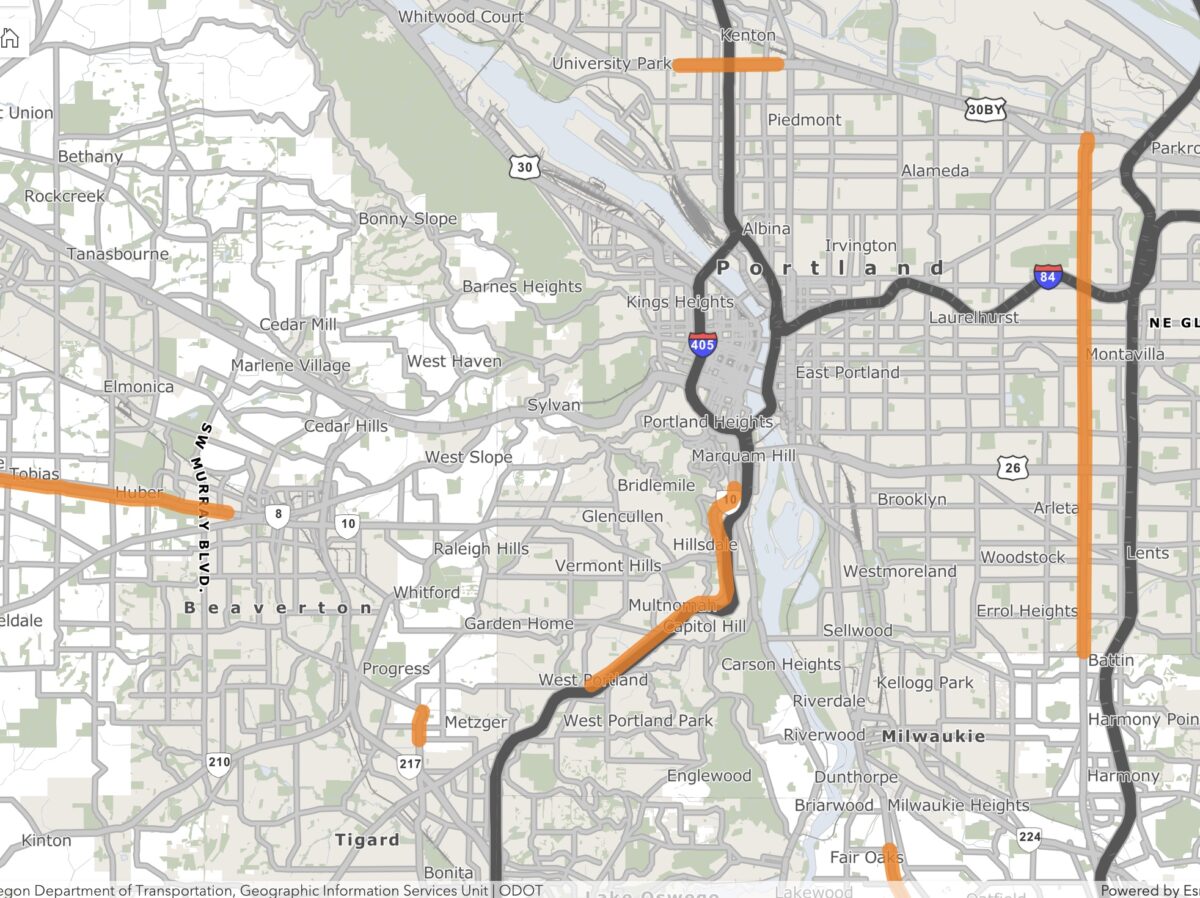 The current list is a 150% list which is ODOT’s way of saying they still need to cut many projects before a final, 100% list can be adopted by the OTC. That’s where you can influence this process. At ODOT’s online open house, you can zoom into your city/region to find out which projects are under consideration. In the Portland area, three major projects are currently on the list:

82nd Ave Jurisdictional Transfer: Fund a portion of the cost to of ped/bike and safety improvements needed to transfer ownership of 82nd Ave from ODOT to City of Portland.

There’s also a safe routes to school project on Hall Blvd in Tigard and bike/ped improvements to McLaughlin Blvd (Hwy 99E) in the Gladstone/Oregon City area on the list. Keep in mind these projects are competing with dozens of others statewide, so you can bet there will be advocates and interest groups lobbying hard for money to come to their communities.

On the survey you can let ODOT know how much you support each project. The open house is open October 31st. Go check it out and don’t miss this opportunity to influence ODOT.

Agreed. As important as the other Portland-area projects are, it’s 82nd Avenue that is the crisis (and has been for some time). It should be funded to 100% of its needs first, and then see if some other projects can also fit in.

Is there a link to the survey? I clicked “Check it out” but that was a short slide deck.

yes sorry. Must have messed that up. here’s the link https://odotopenhouse.org/pedestrian-and-bicycle-strategic

Apparently, I posted this comment in the wrong thread previously.

But in relation to assigning funding to projects and/or allocating additional funding to Non-Highway projects in the name of Gov. Brown’s executive order, is it too late to retool the SW Corridor to be one driving lane in each direction the entire length of Barbur Blvd? We know this thing is going to be brought back to life, and it’s a worthwhile project on the whole. But keeping two driving lanes each direction makes no sense, and it’s now not in compliance with the Executive Order to reduce GHG emissions. With a scope reduction, it should cost significantly less with that much less right-of-way to acquire, and actively reduce driving by slimming down Barbur (the way they did with the MAX line on Interstate–literally the same road, 99W). What, if anything, can be done about that? Anyone?

I don’t post here much but I’m an urban planning wonk and really want to try and move on this, somehow, someway, but have no idea where to start. In this era, it would be a damn shame for the Biden infrastructure bill to help us build out a light rail project that will, at the best case, maintain CO2 emissions (driving) exactly where it is. Talk about a generational missed opportunity.