*Photo of the scene via Oregon State Police (Left). Scottie Graser at a ride in 2016.

A man riding his bicycle died yesterday after he was involved in a collision with a truck operator on Highway 30 south Scappoose. 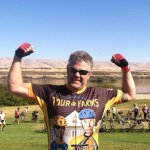 Oregon State Police say around 1:30 pm on Saturday, 40-year-old Dustan Thompson was driving a semi-truck (without a trailer attached) southbound on the highway (toward Portland) in the rightmost lane when he collided with 54-year-old Scottie Graser. Graser was riding in the same direction. The official OSP statement says Graser, “entered the eastbound right lane and a collision occurred.”

This language makes it appear as though Graser left the relatively wide shoulder and put himself into the path of the Thompson’s truck. OSP offered no evidence to support their claim about Graser’s behavior and the investigation is ongoing.

Highway 30 is a very popular bicycling route and it’s known as “Dirty 30” among many in the community due to its debris-filled shoulders.

The crash happened just a few hundred yards north of the turnoff to Rocky Pointe Road (map), a very well-known climb and descent that connects to Skyline Road.

Thompson, the driver, is from St. Helens. Graser was from Scappoose.

According to friends who knew Graser, he was an enthusiastic and dedicated bicycle rider. He was a veteran of many of the marquee organized bike rides in Washington and Oregon. He had ridden the Seattle-to-Portland Classic, Cycle Oregon, Chilly Hilly, the Bike MS Tour de Farms, and many others.

Graser’s friend Daniel Hoyer shared with us via email that he was a, “Nice guy always with a smile and joke.” “He loved to ride long and hard and preferred open country roads to city riding,” Hoyer continued.

Hoyer is skeptical of the OSP version of what happened. “No way he or any other rider would pull into a traffic lane on 30,” he wrote to us. “This is a terrible tragedy.”

Graser worked as a negotiator for the United Food and Commercial Workers Union and he married Peggy Grand in October 2018.

I reached out to Grand via Facebook today. “I have no words,” she replied. “I do know he was the most conscientious rider, he understood how little attention drivers paid to cyclists and was always sure he was extra diligent.”

« Get ready for a two month closure of the Esplanade that starts February 1st
Job: Experienced Bike Mechanic – The eBike Store »