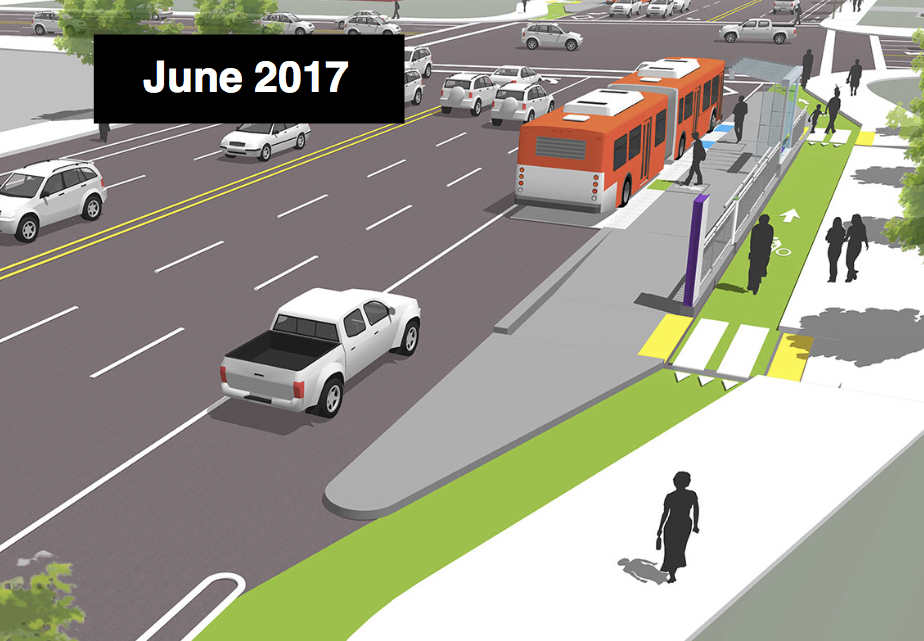 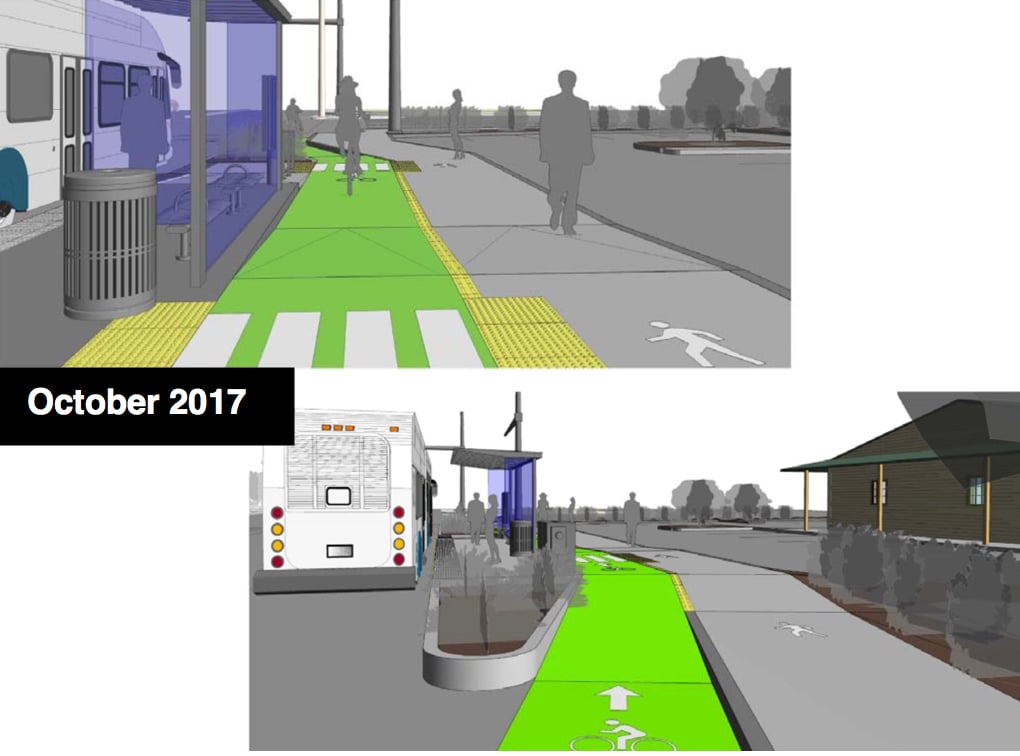 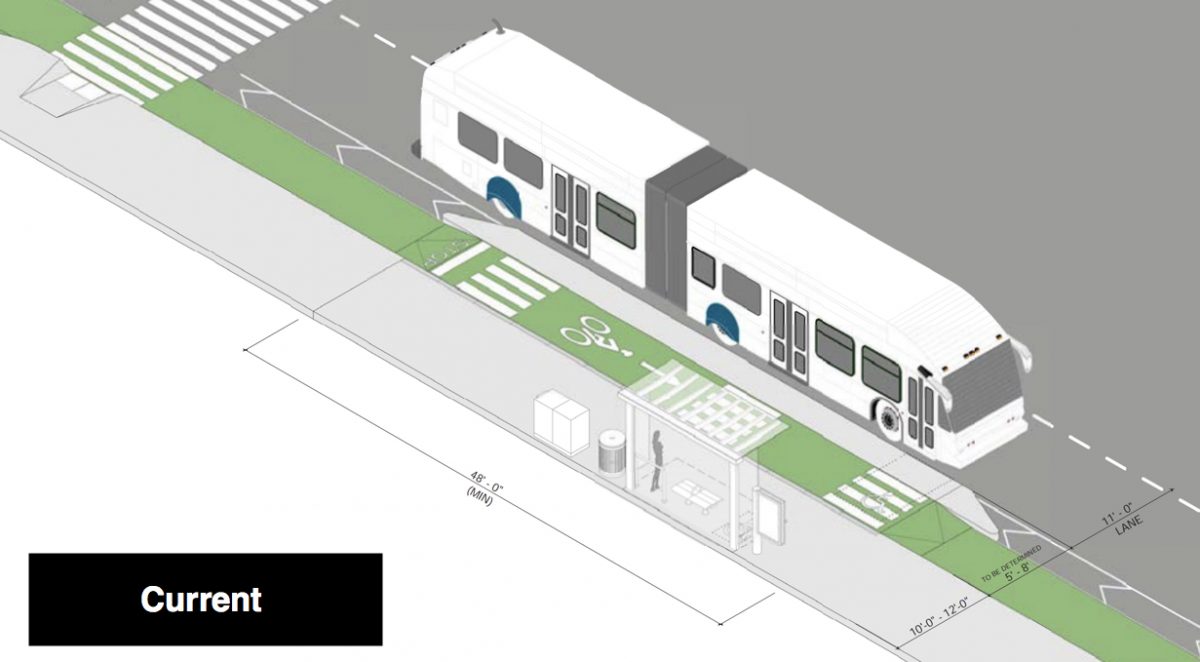 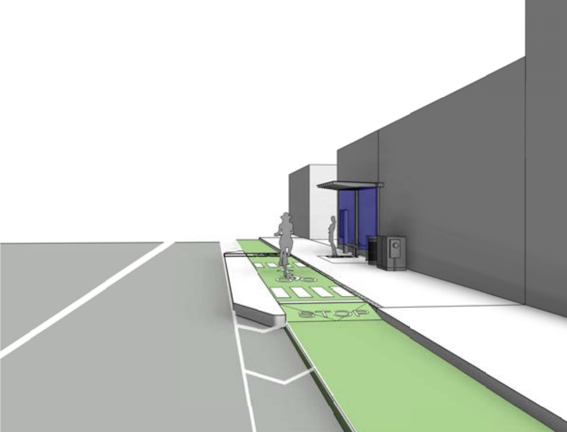 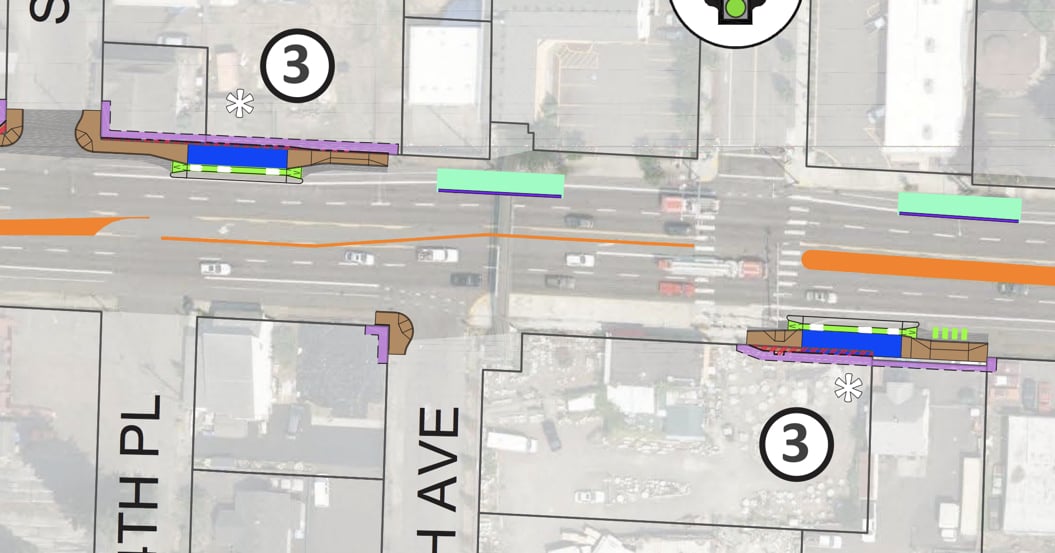 There’s nothing better about this new idea, compared to the one with big bus islands in the original design. I’ve used bus stops like that, biking and busing, many times. Bike lane blockage isn’t a problem because it’s obvious what is and isn’t a sidewalk and ped-bike conflicts aren’t a problem because people can see eachother. Works best if it’s a true island (the bike lane is down at street level, the sidewalk raised, curb-cuts connecting them). Is the new design really that much cheaper? I can see where it would save space in some places, but wouldn’t you prefer the islands if there’s room?

Gary B
Reply to  Al Dimond

Yes. But I think the “if there’s room” was the entire reason for the change. It was for cost reasons, but the cost difference was due to the need to acquire ROW for the old version. So really it was about the space needed.

Other countries, perhaps even other cities in the US, have surely faced these dilemmas and have solved them. Why can’t we START these efforts by building on the cumulative experience of those others? Am I the only one who gets the impression that we here in Portland tend to try to reinvent (square) wheels all the time?

This is pretty close to the Dutch design for floating bus stops, so I’m generally okay with this. As long as the bike lane is solid green, people standing in the bike lane won’t be much of an issue. TriMet should make the ramp up for cyclists as shallow as possible to avoid large bumps in the ride.

I like this design much better than the version that was described in BP 6/12 post on this topic. Narrowing the bike lane for 60 feet every 1/3 of a mile on a corridor that lacks other options for people bikes would be a bitter pill.
In this design there’s no turns or narrowing, so a biker can proceed basically unhindered when there’s no bus. When there is a bus, there could (should?) be some sort of signaling for the people on bikes to stop. Maybe there could be a flip-out stop sign on the bus, like school buses have, but on the curb side of the vehicle, towards the rear.

It is not people waiting to get on the bus that will collide with people on bikes, it is people getting off the bus, that may not be visible until the last second. This is the main reason that the previous design was so much better.

What a nightmare. Everything Trimet has done during this entire bungled planning process– in which this route went from real BRT running on Powell to MHCC, to a pale parody of BRT–has made the project worse, less convenient, slower, and less safe. Here’s what I submitted in my comments on the”open house”:

The “integrated station– shared bike and pedestrian” design is a big mistake–a bad plan that I can almost guarantee will result in several serious injury collisions between bicycles and boarding/exiting pedestrians within the first few months. You are literally designing to create accidents. You might as well make people run across a busy lane of auto traffic to board their bus.

I urge you to *restore the floating bus islands* that have been promised in every previous version of this proposal. This last- minute change not only demonstrates disregard for the safety of pedestrians and bicyclists, but also misleading planning practice. Shame on those responsible for this bait and switch.

Minor tweaks to an initial poor design do not in any way make it better or different.

All bikes will need bells. These bike lanes will be full of babies with strollers, shoppers with grocery wheel-abouts, and unpredictable kids. This will be a bad P/R incident when a appending, heavy ebike runs into a frail neighborhood elder. Sorry, this is America, not Europe.

I looked at 78th to 174th (Outer Division), the portion I’m most familiar with.

I’m rather impressed with TriMet’s design work on this project. They have put most stops after intersections rather than before them, reducing the chances of pedestrians getting hit by cross-traffic. They remove most but not all on-street parking for protected bike lanes (though are these “buffered” lanes or “barrier” lanes?). Best of all, the occasionally force traffic around slight curves, reducing the straightness of the street, thus designing the street for slightly lower speeds. The BAT lanes near busy intersections such as 122nd & 148th help.

I do want to know what is planned for the i-205 section of the street, which is blank.

If the 2017 renderings were impractical due to limited sidewalk width, why were they publicized?