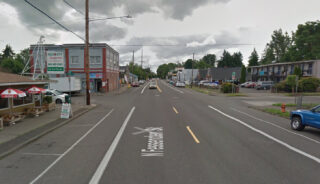 By our count, this is the 48th traffic-related fatality in Portland so far this year (the Portland Bureau of Transportation, who uses state and federal criteria to count fatalities, has the number at 43). There were 44 fatalities on our roads in 2016 and December is typically one of the deadliest months of the year. 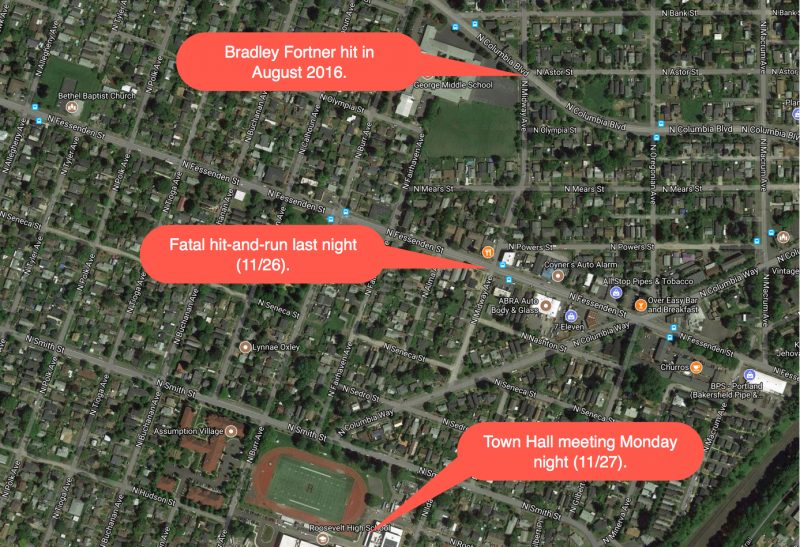 Last night’s tragedy is very timely because just a few blocks south at Roosevelt High School, Oregon House Speaker Tina Kotek will host a town hall on traffic safety tonight. The event will focus primarily on how to improve safety on N Columbia near George Middle School where Fortner was hit last year.

Columbia Blvd is on PBOT’s High Crash Network and neighbors have clamored for safety updates for many years. As we’ve been reporting, there’s an upwelling of transportation activism in St. Johns and other north Portland neighborhoods. This latest death will only make it stronger.

UPDATE: I failed to mention it in the original post, but PBOT has plans to install a new flashing crossing beacon at this location as part of their 2013St. Johns Transportation Concept Development Project. Here’s the page from the report that mentions Fessenden and Midway: 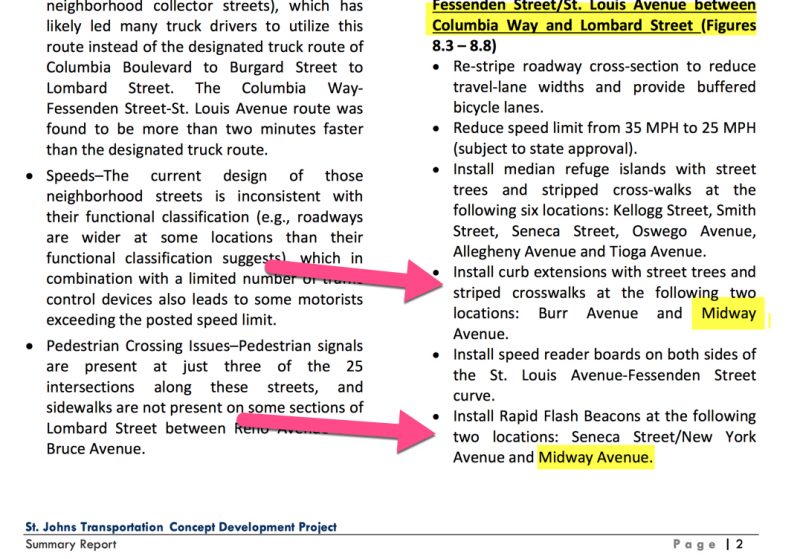 Midway is a popular cut-through on and off Columbia.

Significant changes are coming in 2018 to Fessenden as part of STJ Truck Strategy Phase II. Several under reported driver/pedestrian collisions have occurred in the last year from Midway to Burr. An RRFB will be installed at Midway. However, a big concern remains at many intersections: drivers passing on the right via the bike lane and open parking lane. Even after the road diet, without more curb extensions this will still be an option for drivers.

Understanding is PBOT will go after a 25 mph posted speed limit. Realistically ODOT will allow 30 mph.

Fessenden. And we’ll be asking for a speed reduction on Columbia as well.

Ah, I guess I thought PBOT could set the limit it wants on Fessenden since its not a highway. Let’s hope for 25 and some enforcement, I will be pleasantly surprised by any change to the limit on Columbia though.

In my opinion, every RRFB in the city should be replaced with a full traffic signal, much like the pedestrian traffic signals used for crossing Burnside.

By the way, I see motorist blow through red lights at full traffic signals every day.

The mythology that signals stop people needs to end.

Hopefully some good ideas for Columbia Blvd will come out of this meeting, I drive it way more frequently than I would like to admit and it seems as though the current pedestrian bridge is functionally adequate, but horribly inconvenient. I would love to see traffic calming that would discourage freight traffic but with Amazon on its way I am afraid it will be an uphill battle for any significant improvements. My understanding is Fessenden is “scheduled” for marked crossings similar to Rosa Parks between Willamette and Interstate, we’ll see.

I don’t see a lack of ‘good ideas’ endangering safety in St Johns. Rather, I see a lack of commitment on the part of drivers to recognize this is a dense, older neighborhood with many places close destinations. Walking makes sense here. However, it stands between work and home for many..the neighborhood has worked diligently to calm Fessenden and limit cut through neighborhood speeding. Consistent enforcement is due, but it is due city wide. SJs asset is the great number of active community working toward calming local traffic. I expect the squeaky wheel will get the grease.. as well it should.

I notified Bradley’s mom of the meeting tonight, not sure if she is aware yet or can make it our if she wants to. But it can be very difficult for family members to speak up about the worst day of their life, especially with victim blaming, and car culture the be all/end all of the “real” reason for roads according to most people. I hope the will and the money is stronger than the blowback of the uninsightful.

I find it so hard to comprehend how someone could hit another human being with a car and just drive off, completely ignoring if they are dead or alive. Happens way to much in Portland.

They probably were drunk. It’s about the only time there’s consequences for killing someone with a car. If the driver is caught the next day, punishment is much less severe.

Withhold legal penalties for car theft and vandalism until there has been one full calendar year of no hit-and-runs. Drivers’ property deserves no more regard from the state than drivers themselves give other road users.

You’re twisted. I like that in a person. I once suggested hiring unemployed youth to steal cars as a way to encourage cycling and transit use, an idea that was definitely not appreciated by my car-bound co-workers (especially after a group of twelve-year-olds vandalized and stole a few of our cars at workplace).

I’d actually prefer that we simply close to cars for two years any road on which a motorist causes an injury or death to another road user. If that doesn’t cause widespread behavioral changes among motorists, we would soon have a very complete car-free grid to ride on.

This is the equivalent of punishing three children because the fourth is disobedient. Or making the team run laps because one player screwed up. Such an approach only sort of works because the punished know who the real troublemaker is. When the parent (or coach) isn’t looking they gang up on the bad seed and beat the snot out of him. At best it is a dysfunctional approach that leads to generations of suffering. I’m not sure we want to apply this model to traffic management.

I see it more as a form of harm mitigation and behavior management than collective punishment. If a group of kindergarten kids were regularly hitting each other over the heads with toy cars, and also breaking out the windows by throwing the cars, but had no issues with legos, nerf balls and stuffed animals it would be logical ( and common I would guess) to take the offending dangerous toys away from the kids until they learn to play with them nicely. It seems the modern motorist has much in common with kindergarten kids, but are more dangerous.

We should apply this method to all crimes. Someone gets shot in your neighborhood? Neighbors are bound to be more vigilant if they know they’ll be punished too. Package or bike thieves strike again? Well, that’s way less likely if everyone in the vicinity knows they’ll have to answer for it. What could go wrong?

I believe speed is just one of the factors. That area of Portland has faded road lines,(Yellow and White) and not the best road side lighting. Coming from a North Portland resident that rides quite frequently. I often wonder if updating our lines and lighting would have a better effect that automatically basing it off the the average speed of the road. Also, That is an area of high car theft. ( 6 point ) and could easily see this case ending up as a grand theft auto case. Either way, No way to go on a cold night. My condolences and thoughts to the family.

speed is the main factor that causes serious injury, life-altering injury, and/or death.

I live up in there and both ends of Midway are horrible for all modes of transportation.

At the Fessenden end, there are so many cars and people and people coming from weird angles that it may be the most stressful intersection I drive. When you have to account for 35mph traffic it makes it even worse, and that’s if people are following the speed limit and not using the bike lanes to cut around people waiting to turn left.

At 25mph, it would be a lot easier to make the decisions around that turn with fewer mistakes.

The intersection is horrible for many factors, but speed exacerbates every one of them.

I’m looking forward to seeing what ACTION comes out of tonight’s meeting convened by Speaker Kotek.

Good luck Scott..and luck to all…I am rooting for you tonight!