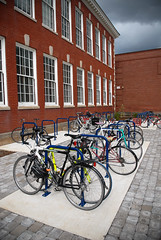 U.S. Representative Earl Blumenauer announced a new bill yesterday that would expand the existing Safe Routes to Schools program to high schools. The Safe Routes to High Schools Act would enable high schools to vie for federal grants that would help them build walking and biking facilities for students.

The goal of the bill is to improve the health of our nation’s teenagers, make traffic around schools safer, and provide a less expensive way for kids to get to school.

A one-pager on the bill states that the obesity rate for kids between the ages of 12 and 19 have more than tripled in the past fifteen years, with 17.6% of high school age kids now classified as obese. Another statistic that provided impetus for this proposed legislation is a Centers for Disease Control estimate that 25% of traffic within three miles of a school comes from parents dropping off or picking up their children. 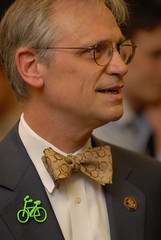 That traffic isn’t just inconvenient, it’s tragic. Traffic collisions are a major cause of death serious injuries among children.

The current Safe Routes to Schools program was established by federal law in 2005 and there are over 4,500 existing programs throughout the country. However, the current program only covers primary and middle schools. The intent of this proposed legislation is to “capitalize on the healthy and green habits these students have developed” and continue the program into high school.

The bill already has a companion in the Senate. Senate Bill 1156, the Safe Routes to Schools Program Reauthorization Act is expands the program to high schools, among other policy changes. This bill was introduced by Senator Harkin (D-IA), Senator Burr (R-NC), Senator Sanders (D-VT), Senator Merkley (D-OR) and Senator Collins (R-ME) back in May.

This is fantastic news. I always wondered why the original bill didn’t do this in the first place.

Good small step. I’m speaking on topic as a former Jefferson High teacher, my electives ( computers, newspaper ) were cut due to lack of budget.

Our lack of education budget is due to Earls inaction.

It’s both the small good things Earl does, and the big things he fails to do.

It’s great if your dad gives you an occasional gift, but a bigger problem if he lets the bully neighbors steal all your money.

I think you have a bit of a typo: The NPR article states that 830,000 children under 18 die each year from *all causes*.

“The report said traffic accidents, followed by drowning, fires and burns, falls, and poisoning, are the five major causes of unintentional injuries. About 830,000 children under 18 die every year, and millions more children suffer disabling injuries that could have been prevented, says Dr. Etienne Krug…”

Thanks for catching that Steven. I’ll edit the story right away. — Jonathan

Thanks, Joe, for not, you know, leading off with the Earl-hate.

Oh, and Bernie Sanders is not a Democrat. He’s (defiantly so) an Independent — the good kind, not the Lieberman kind. He is a self-described socialist, and former mayor of Burlington, VT. I was proud to vote for him when I lived there.

Though according to the National Center for Health Statistics National Vital Statistics Reports (March 7, 2005) the leading cause for 10-19 year olds in 2002 were motor vehicle traffic deaths.

Sorry for the morbid statistics.
-Scott

Huh? Most (almost all)of education funding comes from the state.

In fact, the Oregonian had a story that said that if it weren’t for the Federal stimulus package that there would be 20 fewer school days and a lot more teacher layoffs.

Everytime there is a post about anything Earl does, you write in and bash him. It’s getting old.

I think this bill is great…I just wish Earl would stop it from raining…and why did he let the Yankees win again!

Not so much in Portland, but many high schools have huge parking lots that encourage driving. I would love to see inserted in the bill language that requires an assessment of needed levels of parking vs. whats readily available. If a student has no compelling reason for driving to school, and public transportation and/or safe facilities for walking-biking are available, or perhaps a home to school distance radius guideline enforced, to encourage less driving. And perhaps heightened levels of parking enforcement around schools would be a good idea too.
Bearing in mind this is a national issue,how Portland does this is not how the rest of the country might.

If you’re interested in knowing how things can be arranged so that all students arrive at school by bike, take a look at a typical high school cycle route in the Netherlands.

Some children cycle over 20 miles each day to get to school and back, and the infrastructure to make it possible is everywhere.

All schools in this area have cycle parking sufficient for every student to bring a bike to school.