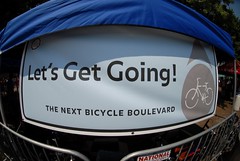 A banner for the BTA’s campaign seen
at an event this summer.
(Photos © J. Maus)

Back in August, the Bicycle Transportation Alliance (BTA) announced that Going Street would be the focus of their first major effort to create a new bike boulevard in Portland.

Since then, BTA staffer Emily Gardner has been busy shoring up neighborhood support for the “Let’s Get Going!” project. A few days ago she updated us on her progress.

Gardner reports that in her visits to nine neighborhood associations and six business districts along the NE Going corridor over the last three months she has received “overwhelming support” for the project.

Also boding well for the Going Street bike boulevard campaign is that PDOT has a big new plan of their own to focus on funding sources to develop low-traffic, family and bike-friendly streets (I’m working on that story right now). 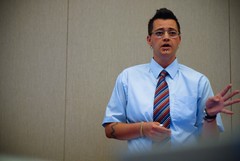 Emily Gardner, seen here at the Carfree Conference
back in June, is leading the “Let’s Get Going!” effort.

With talk of major public works investments at both the national and statewide levels, there’s a lot of action around bike boulevards these days .

If you’d like to volunteer and help with the BTA’s efforts, Gardner says there’s a great opportunity this Saturday. Here are the details:

To learn more and add your name to the list of supporters for this project, visit BikeBlvd.com.

There was clear community interest in the plan as well as genuine questions about funding, safety, and the like. It was a welcome discussion overall and the CNA Board formally endorsed the plan on 10/14.

The type of grassroots discussion and outreach that is happening with this plan is very valuable. It opens the discussion to a wider audience – rather than preaching to the converted. I applaud Emily and Mark for their efforts on this project.

I am looking forward to biking on NE Going on a regular basis – and I hope that NE Holman is next!

Sweet. I would love to see Going become a bike boulevard.

I used to take Going, but it was a few blocks too far north.

Then I switched to Skidmore, but just got tired of all the stop signs and through cross traffic.

Lately I’ve been using Prescott for its lack of interruptions, but it’s a bit narrow and heavily trafficked by cars (between MLK and 42nd).

I’d switch to Going again in a heartbeat if it became a boulevard.

I love the Going alignment! For a cyclist with cargo pretty much anything south of Going encounters too much of the Alameda ridge.

I would like to see more and better connections. Williams/Vancouver is a no-brainer and is first on anyone’s list. However, some important other connections could be made, which would enhance Going’s standing as a key (currently missing) link in many recreational and commuter networks. To wit: 1) the connection to Alameda in the twenties could be enhanced by a little bit of good signage at a crossing of Prescott; 2) the connection to Willamette Blvd needs enhancement at Will/Vanc and at the crossing of Interstate (i.e., continuing the approx Going/Sumner alignment westbound beyond Vanc); 3) please don’t stop at 72nd, but continue (probably with bike lanes on Prescott) to the I-205 bike path; 4) provide clear signage to get folks from Going/Presc in the seventies to the foot of Rocky Butte. Thanks for all the great work and neighborhood connections that have made this possible!

Then let’s get a north/ south bicycle boulevard in the 11th to 13th range.

Can you imagine when we will have an interlocking grid of bicycle boulevards connecting NE, N, SE and beyond? It’ll be like Davis or Berkeley.

Prescott is already a bike boulevard I belive and it’s only 2 blocks south. It’s already used by quite a few cyclists. If it’s got a problem with too many stop signs and what not, perhaps working with PDOT to move some of those and improve Prescott is the best solution?

Skidmore is two blocks south of Going (Prescott is one) and it is a designated bike route. Both are not favorable for cyclists due to motor vehicle traffic and numerous stop signs. Starting fresh on Going is the way to do it. It’s quiet and already a pleasant street to ride. Removal of stop signs is key. I got a $242 ticket already this year for “rolling” and don’t want another. They should transplant some of those stop signs to intersections that have none and there are plenty of those in NE.

Going is it! Far preferable to Skidmore. I appreciate that Going has a very gradual incline, fewer stop signs and less traffic. I already use almost everyday. I’m very stoked to read that this is a work in progress.

The only potentially expensive rub is getting across MLK Blvd safely. This is where Skidmore works already since there is a light at the intersection right now.

K., Prescott may be a bike route, but a bike boulevard it is not (at least not between MLK and NE 33rd). It is a heavily trafficked street by motorized vehicles moving at 30+ MPH and the lanes are too narrow to share with them in many places.

Yah… Prescott is sketch. It’s an auto arterial…I’ve never even thought about riding on it.