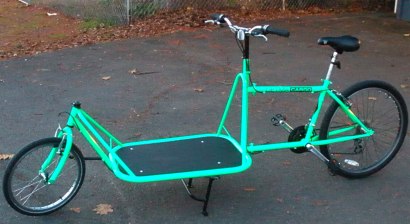 The latest news in the hot cargo bike market comes from Eugene. The photo above is of the new CETMAcargo bike designed by Lane Kagay of CETMA Racks.

All loaded up.
(Photo: Lane Kagay)

CETMA, well-known for their front cargo racks, moved to Eugene from San Francisco back in 2007. Kagay says his cargo bike — which is manufactured just outside Eugene — is still in prototype phase but will be will be available soon. He’ll be in Portland at Clever Cycles on Thursday afternoon to give a special sneak preview and offer test rides of the bike.

Here’s what Kagay revealed about the bike in an email to BikePortland: 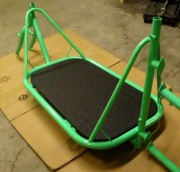 View of the bin on the shop floor.

This bike is very innovative with a frame-integrated platform and bi-partable sections which makes front cargo area and rear cockpit interchangable for different rider’s preferences. Makes shipping easier, too.

Future features will include an internal hub (NuVinci?) and disc brakes.

Kagay also says on his blog that the bike weighs only 55 pounds. This bike looks like a very capable hauler and I can’t wait to see these on the market.

Eugene is also the home of the Center for Appropriate Transport (CAT). Their Long Haul cargo bike is also made in Eugene.

This bike is yet another sign that the cargo/utility bike category is a hot trend in the bike industry. In the past few months we’ve heard about new bakfiets from China and Portland, a rear-load approach by Salt Lake City-based Madsen, the heavy-duty Yuba Mundo, and more.

For more on the development of the CETMAcargo bike, check out Kagay’s blog at CETMAracks.com (click on “News!” in the sidebar).

[Note: Several of you have emailed about my upcoming review of the Madsen (which I’ve been riding daily for over a week). I’m working on it and hope to publish the story soon.]

Lane makes a cargo bike!?! That’s great! I’ve ridden a few of his racks and have always liked them, it’s pretty sweet that he’s moving into bikes and the cargo bike is really right up his alley. Yeah Lane!

I’d like to point out that I didn’t entirely design this bike, though I would have liked to!

“Future features will include an internal hub (NuVinci?) and disc brakes.”

I really like what I’ve seen of the NuVinci hub, which is essentially this video:

Maybe I’m just easily swayed by the snazzy computer graphics :). Have you had a chance to try this hub? Do you know if it’s durable?

I have been riding the NuVinci on my cargo bike for the last 4500 miles (or so), and I love it. It is especially appropriate for cargo applications due to the ability to shift in small increments at any time, as well as the lack of internal gear teeth to wear down. You can read my first impressions of it here: http://tinyurl.com/2kfdu4 This was written after one week on a test bike; it was almost a year before I got one onto my personal machine. I will be writing a follow up review sometime around the end of the year.

after being underwhelmed initially, i’ve warmed up to the nuvinci after using it on our assisted bakfiets for a while. it’s certainly a contender for best balance of cost, range, and apparent toughness. i wish i had numbers on efficiency, especially at higher torque: i suspect it’s not fabulous, but then neither is nexus 8/alfine in, say, 4th gear.

o and hubs aside, i’m loving this bike.

ive been chatting with lane about this for about a week now, and some things im liking about this already:

1. almost-complete perimeter frame design. theres still a center boom tube, but i think with a little reworking of the cargo area, this can be removed.

2. seemingly low standover height, while still having a top tube. makes for a more rigid frame, but makes this design potentially more accessible to the shorter set, who cant ride a standard long john because of standover issues.

3. modularity. good for shipping, and versatility.

Lane good luck on the bike and the effort at broadening the choice for freight type bikes!!! The modular packing is fab for possibly traveling with one’s freight bike (family camping).

(And Jay thanks for hosting the Madsen and the Danish pocket rocket freight bikes last week. Very fun but I will not be giving up my bakfiets yet…though after riding the Madsen it would be perfect for those riders with experience piloting a tandem…something I do not have.)

Love what you blokes & gals get up to over there in the cargo bike world. Keen to see how the NuVinci goes on Lane’s bike.
Robert, Australia.