Is Sandy Boulevard the ‘worst street ever‘ or a misunderstood corridor with the potential to be great? The answer will depend on who you talk to; but there’s no question it needs work. What began as a Native American trail as the quickest way to get from the Willamette River to the Sandy River, turned into an automobile cruising hot-spot in the mid-20th century and is now a wide arterial that cuts diagonally through Portland neighborhoods leaving a trail of complicated intersections and risky decisions for bicycle riders in its wake.

But there are those with a sweet spot for Sandy. Among them is Ted Labbe, a sustainable urban planning advocate who directs the Urban Greenspaces Institute and is on the board of re-greening group Depave. On a Pedalpalooza ride down the diagonal corridor Thursday evening, Labbe encouraged cyclists to take up space on a car-centric street and ask the city for what we deserve from Sandy.

“We are the figurative sand in the gears of the automobile-dominated Sandy Blvd of today,” Labbe said as we took off from the Roseway Parkway to head southeast. “And we’re actively making it better for tomorrow.”

I was a little nervous going into this ride. As much as I can see the benefits in getting comfortable biking on Sandy, which offers a much quicker route from Portland’s Central Eastside to outer southeast than you can get on the greenways, I prefer to take the long way if it means I can relax a little.

But with Labbe and a group of other riders leading the way, I began to change my tune.

Engineer Adam Zucker, who led the ride along with Labbe, shared insights on Sandy’s stormwater gardens, which are hidden amidst the car traffic but designed to create some much-needed greenery on an otherwise barren corridor. Rain gardens are an art form Portland seems to have really nailed down – there are over 3,600 throughout the city – and once you start noticing this urban ecology that can thrive against all odds, you’ll start seeing them everywhere.

Since a jurisdictional transfer turned it over from the Oregon Department of Transportation in 2003, Sandy is controlled by the City of Portland, a fact that should make it easier to make safety-related changes in the future. But there are still roadblocks preventing that from happening as quickly as it should.

“We might have aspirations of a complete Sandy, but there’s jostling for control within the bureaus,” Labbe said.

Speaking of which, Labbe was able to nab some bureau representation for the ride – Zef Wagner with Portland Bureau of Transportation and Colleen Mitchell from the Bureau of Environmental Services. They seemed optimistic about the two departments working together.

Wagner shared updates about projects to make Sandy more accessible to people walking, biking and taking the bus along the corridor. For instance, there’s the plan in motion to improve the intersection at NE Alameda, 57th and Sandy with an eastbound driving ban and signal changes to help speed up bus service and prevent drivers from cutting through the Alameda Neighborhood Greenway. It’s a small change, but more like it could add up.

“We can make incremental improvements to the greenway network to discourage automobiles from utilizing those streets to the extent they do and make it more inviting to people biking,” Labbe said.

With so many smart, invested people putting work into making Sandy Blvd a better place to be, why is it still a scary place to walk and bike? This was a big theme of the ride: how fast should we expect to see progress on a street like Sandy? Are incremental measures enough?

We ended the ride at SE Sandy and 7th Ave, at a little triangle of street Depave is working to turn into a public plaza with green space and enhanced safety for active transportation. It’s a small strip of pavement just blocks from an interchange for a massive freeway that our state transportation department has plans to expand, surrounded by multiple high crash streets.

As we stood there among traffic whizzing by, talking about the future we want to see for this city, I noticed people looking at us. Perhaps they were amused or curious – but perhaps they were re-thinking what streets like Sandy could be.

Why do all these projects make bikes wiggle and slow down? The downhill bike lane from Stark to Washington should be a straight shot. They’re always doing this with new protected intersections/lanes and it’s just going to make biking slower for no reason. Make the cars slow not bikes.

Couldn’t agree more strongly, Steve. PBOT’s solution at every intersection is to make the bikes stop at a 90-degree angle where cars can see them so that the cars can then stop and wait for the bikes to cross in front of them and then the cars can go again.

It just slows everyone down and makes everyone mad – especially the drivers at the cyclists, for slowing down their two-ton machines.

I get that this is what works for cycling children, but we’re not all children.

Is Sandy east of 105th still an ODOT facility? Or did the city recently take it over?

In 2002-6 I served on the Sullivan’s Gulch NA and I remember going to all the PBOT and ODOT Sandy open houses. We tried hard, DAMN HARD, to get them to put bike lanes on the diagonal part of Sandy – it seemed obvious then and it still seems equally obvious now. The pushback wasn’t from ODOT, it was from PBOT. They kept arguing that Sandy was for car traffic, that we bicyclists have parallel bike boulevards we can use, and so on. What is PBOT’s current vision for inner Sandy, now 20 years later?

I note you were riding on a Thursday evening with nearly no cars in sight. What is traffic currently like on weekday mornings and afternoons?

It becomes ODOT at 99th where it joins with Lombard. It’s a very noticeable difference too. Even just the light timing around there is all about cars.

Last time I biked over there I was almost hit by cars while in a crosswalk three times. They just aren’t looking for anything other than cars cause no one walks around out there if they don’t have to.

“They kept arguing that Sandy was for car traffic, that we bicyclists have parallel bike boulevards we can use, and so on.”

Here’s irony. Motor vehicle operators have a parallel route reserved for their use, engineered for high speed and maintained in good condition. But, they abandon it for NE Sandy.

If I had a dollar for every time a fellow cyclist admonished me for riding on Sandy… well I wouldn’t be rich, but I’d have a couple dozen more dollars. Triple that if you count the number of drivers who would slow down to lecture me from their cars/trucks.

I’m slower on the bike these days and people in autos are driving more dangerously, so I stick to the indirect “safe” routes. But it’s nice to see some other folks have similar feelings that I do about Sandy. It could be a beautiful, fast and safe bicycle corridor if someone at City Hall/PBOT had a little guts to make it so.

I think at some future time the pavement on Sandy might break up to an extent that would make it a feasible bike route.

I would use Sandy to get from NE 50th to downtown in 2005. quickest way. the ride home on sandy involved more sidewalks.

Sandy Boulevard is a corridor with the potential to be great, but it’s the ‘worst street ever.’

This is great. My first gut reaction was I’m glad no one was seriously injured.

I fear walking it and avoid at all costs when with kids (Broadway is the same).

Sandy could be great if the design was taken seriously. It’s currently very lazy autocentric design. There are so many interesting businesses, I wish I could safely stroll it.

Right. We lived just off Sandy at NE 81st from 2016 to 2020. Going downtown, we generally took the Klickitat or Going greenways. When by myself, I sometimes got on Sandy for short stretches to speed things up. But never with my kids.

Thanks for the nice article, Taylor! I think the opportunities on Sandy are limited only by our imagination. If the TriMet ran more frequent buses, and the City advanced the Rose Lane Project beyond just a few spot treatments, we might see the transformation we need. What if we had Bus Rapid Transit (BRT) on NE Sandy with only 1 lane of automobile traffic each way? [Not the fake BRT like on Division…real BRT!]

Or, take the idea to the logical extreme and allow car use only in local connector loops for business access and have the through street be bus traffic only. Personally I could accept having no legal access for bikes because 1) It’s no real loss from the status quo, and 2) Law breaking is what I do when the road making elves forget to include bikes in the design.

Zillow’s new ‘bike score’ tool thinks Sandy offers the right route to downtown. Doesn’t give me confidence in this feature. 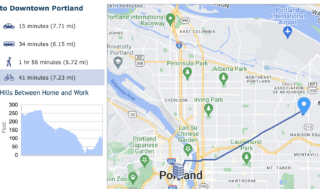 Just build a protected bike lane for Pete’s sake. It’s a boulevard and making it a multi modal thoroughfare with good landscaping is a no-brainer.