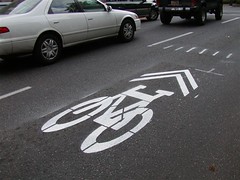 These roadway markings in Northwest Portland are known as shared lane markings, or sharrows. They were installed back in September as an experimental project, and they’re still awaiting official sanction.

Because the markings are still new to many road users, the City of Portland has developed a list of frequently asked questions. They’re not available anywhere online yet, so I’ve gotten permission to publish them here:


Bicycle lane markings have shown up in the middle of the street. Can I still drive there?
If there is not accompanying white stripe with the marking then it is not a bicycle lane. What you’re seeing is a shared lane pavement marking, also known as a “sharrow.” You may still drive in that travel lane.

What are sharrows?
Sharrows are short-hand for “shared lane pavement markings.” The indicate that motorists and cyclists are to share the travel lane.

Most streets in Portland are shared by cyclists and motoriss and don’t have sharrows. Why mark only some streets?
Most Portland streets carry low volumes of traffic with relatively slow speeds and special markings aren’t needed. We are placing sharrows only on streets where traffic is relatively heavy, speeds are a little higher, and the streets should be marked with bicycle lanes but cannot be because of demands for on-street parking or the number of travel lanes.

Why are these markings on the street, what is their purpose?
To create safer conditions for bicycling. In the absence of bicycle lanes on busy streets cyclists often ride too closely to parked cars. If somebody were to open a car door as a cyclist passed the cyclist could get “doored” and possibly get injured, perhaps seriously—especially if there was passing automobile traffic. Also, when cyclists stay far right in narrow travel lanes passing motorists often pass too closely to the cyclists. This is not only unnerving for the cyclist, but it also leaves little margin for error.

Why not just stripe bicycle lanes?
There would be our preference on these streets. We’re using the sharrows instead because there isn’t enough room on the street for bicycle lanes in those areas. This is typically because of a combination of a high demand for on-street parking, and the inability to either eliminate a travel lane, or narrow the existing travel lanes. It is often also either physically too difficult or prohibitively expensive to widen the roadway.

As a cyclist, what should I do in the presence of sharrows?
We’ve placed the sharrows outside of the parked car’s “door zone.” Because the travel lane is too narrow for safe side-by-side travel by a motorist and a cyclist we expect cyclists to ride through the center of the sharrow.

As a motorist, what should I do in the presence of sharrows?
Slow down and drive carefully. Because the travel lane is too narrow for safe side-by-side travel by motorists and cyclists we expect motorists to slow down and either wait for the cyclist to turn off the roadway, or wait until you can move into an adjacent travel lane.

Why not put sharrows on all busy streets?
Right now we’re using sharrows to fill in relatively short gaps in bicycle lanes. We’re also in a testing phase right now. Depending on how well they work, we may expand the use of sharrows to longer gaps on City Bikeways. Currently, our draft guidelines only allow them to be used on streets that are classified as “City Bikeways.” We can make our draft guidelines available to you if you’d like.

What do you hope to accomplish with the sharrows?
We want to create safer conditions for bicyclists on busy streets where we should have bicycle lanes but cannot. We hope to do this by moving cyclists a little further away from parked cars than they would normally ride in the absence of sharrows, and creating a little more separation between passing motorists and cyclists than would normally exist.

Will you use them on other streets?
Right now we’re testing how well they will work in Portland as part of a test that’s being monitored by the US Government’s Federal Highway Administration (FHWA). If the markings prove effective then we’ll slowly expand their use to other, similar locations that meet our guidelines.

Since sharrows don’t require removing parking or travel lanes – as often occurs with the striping of bicycle lanes – why not just use sharrows instead of bicycle lanes?
We still consider bicycle lanes to be the best treatment for creating safe and encouraging conditions for bicycling on streets with higher volumes of motor vehicle traffic because motorists are not delayed by the presence of slower-moving cyclists in front of them, and cyclists are not feeling intimidated by the presence of following motorists who wish to pass them. We will consider using sharrows only after exhausting all possibilities for installing bicycle lanes.

So there you go. Everything you ever wanted to know about sharrows. If you’ve still got a question about them, feel free to leave a comment.

Me too. Thanks, Portland!

Funny, I just found one of these for the first time the other week. I admit I was confused at first – bike lane? Car lane? Both? Mostly because there was a long line of cars in the left lane and and empty sharrow.

I’m not so sure this is a good thing. Bikers already have the right to take the lane when no bike lane exists. Doesn’t this reinforce for drivers that bikers are lesser citizens that need “special” markings to take the lane?

I don’t care for this idea either – I think it will promote confusion for drivers. Either they’ll think they can’t be in the lane, or they’ll assume they can travel down any lane with a bike symbol, even though cars in the bike lane is illegal.

At least once a month, I almost get run down turning left onto 7th from the Hawthorn bridge – I believe in part thanks to the bike lane that makes drivers think I’m illegally in the left hand lane to make the turn. That of course gives them the right to sit a couple feet off my wheel and honk; because risking my life is one way to teach me to stay in the bike lane where I belong.

I think bike lanes and sharrows in part give drivers the impression that bicycles belong only along regulated and marked paths. I also think lanes and sharrows bring out more bicyclists with the illusion of safety. If I had to choose one or the other to bring out more bikes, I’d chose sharrows over lanes. I think the lack of the solid line lets drivers know at least that we have a right to the road, if not all of it.

Mick– Yes, bikers have the right to take the lane — and that may be old hat to hard core, long time commuters, but what about people who are just starting out or don’t do it that often? It’s fine to SAY that it’s theoretically safer, but harder to excecute when that inconsiderate driver behind you is running up your ass.

I think anything A) helps us assert our rights as bikers and B) encourages drivers to be more on the lookout for us sharing the road, is a great thing.

I’ve used the sharrows a couple of times when riding my bike to work at Cinema 21. I don’t know how well they’ve been received in other places, but the ones on the pavement of NW 18th, just after crossing Burnside, are extremely helpful.

It’s crazy enough coming down the deeply potholed streets away from PGE park and then crossing rutted-out Burnside. To make matters worse, as soon as you get through the mess and up the wee hill, the right lane becomes a turn lane, and there are few safe places to ride. Do you take your chances a hair’s breadth from the parked cars, or risk life and limb with the fast-moving, distracted Northwest drivers?

The other day I noticed that the turn lane now has sharrows on its left-most side, directing cyclists straight ahead to where the bike lane begins. It’s fantastic, because fewer people turn right there. The sharrows allow cars to get past winded cyclists, and allow the cyclists their own unimpeded path. The markings were very clear, and everyone (cars and bikes) around me seemed to understand just what to do.

The problem with the sharrows on NW 19th are that they are in the wrong lane for cyclists wanting to turn left onto NW Everett, which I believe is the direction many if not most cyclists riding south on NW 19th want to go.

Nobody in particular asked for an I Heart Sharrows t-shirt, so here it is:

I recommend getting it in white for now, but it might look OK in other colors… may release an updated version for black in a little while. If so, I’ll re-post here and in the online store.

I like — heart, even — sharrows because they indicate to motor vehicle operators that bicycles and cars are both appropriate road users.

When I see one, I get the same feeling that I get when I am riding through a difficult intersection, taking the lane, and I look up and see a yellow “Bicycles allowed full use of lane” sign.

Perhaps I respond excessively to wayfinding. But so be it.

I’ve both ridden and driven the sharrows section of NW 19th several times in the past few days and I have the following comment:

The sharrows markings are too far to the right – not far enough out of the door zone; far enough right that a motorist overtaking a cyclist centered on the markings might still be tempted to pass too closely while straddling the lane divider; and in the right tire path of cars that will cause them to wear off in less than a season of winter studded tire driving. They should be centered in the lane.

I think these are great. I ride NW 19th on my way to SW Portland often, and I’ve found I ride a few feet further out than when I did when the sharrows were not there. Haven’t been honked at yet, either.

We just got our first sharrows this year in Minneapolis — just one street, but an important one for connecting our Midtown Greenway with residential areas and downtown. Riding it before and after, we found that the drivers have been more considerate since we got the sharrows. So I ♡ them, too.

I am on the fence about sharrows. some of my people in CA think they are dangerous, http://www.svbcbikes.org/crank/nov-dec-04/sharrows.php

as part of sf bike coalition, we lobbied hard to get more like these.

either way, you have to admit that the word “sharrow” is funny. and, I like funny.

watch out for those car doors. oh, and, also, why does the city not stand behind these? I still cannot find any mention of stuff like this on the “official city website” which, at best, could use improvement. whatever…