Plans for separate bike and pedestrian paths and a new signalized crossing on NE Sandy Boulevard at 72nd have been whittled away as the Cully Connector project goes through yet another iteration. 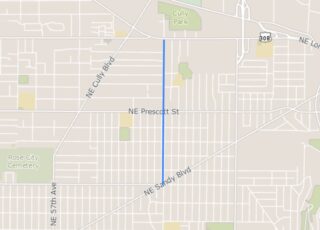 The Cully Connector is the one-mile stretch of the larger 70s Greenway that will eventually connect the Rose City Park neighborhood to Brentwood Darlington and the Springwater Corridor.

While the initial plan for this project was to build a separated, “biking and walking parkway” on the wide Roseway Parkway median in the middle of 72nd Ave, PBOT scrapped that back in 2019. In its latest iteration, the Cully Connector will have a narrower, less expensive greenway design.

Here’s the news from PBOT:

Instead of separated biking and walking facilities between NE Prescott and Sumner streets, PBOT will construct a multi-use path. The early project concept included a sidewalk and separate bicycle-only facility between NE Prescott Street and NE Sumner Street (where available right of way is wider). To reduce cost, we have changed 3.5 blocks of this separated facility to a multi-use path, meaning that pedestrians and people biking will share the 12 foot-wide space. The multi-use path will still be physically separated from motor vehicle traffic. North of NE Sumner Street, the plan already included a multi-use path since available right-of-way is narrower.

Metro supplemented PBOT with $2.2 million in funding for this project from Regional Flexible Funds, which gave planners a total budget of $5.4 million. PBOT now says they aren’t able to stretch that figure to cover everything they’d originally wanted to include and new plans trim $1.5 million off the price tag.

“At my house it is just going to be a curb and probably a bunch of ugly wands instead of the grade-separated bike path we were promised.”

In an email update this week, PBOT blamed the cutbacks on, “rapidly changing pricing conditions due to supply chain challenges and increasing labor costs.”

“The design team went back to the drawing board and looked for places to reduce cost while still retaining the original goals and spirit of the project,” the statement reads. “We wanted to keep the overall length of the project (NE Sandy Boulevard to NE Lombard Street) intact to avoid any gaps in the route.”

The other major cut is a signalized crossing at NE Sandy Blvd near the western leg of NE 72nd Ave. It’s currently a puzzle to figure out how to cross at the Sandy/72nd/Fremont intersection, and an added crossing would have given people another option for safely getting across Sandy. PBOT says they’ll still implement turn restrictions at that intersection to reduce conflicts.

Beyond budget constraints, this project has also faced some hurdles as a result of neighborhood contention. As we covered last year, some people in the Roseway Neighborhood weren’t excited about potential car traffic diversion changing their neighborhood. It’s unclear if the latest changes were influenced by that controversy.

One person who lives in the area reached out to express their disappointment with the new plans. “They have slashed more off what the project will provide. At my house it is just going to be a curb and probably a bunch of ugly wands instead of the grade-separated bike path we were promised. Very frustrating, and with 2 more years of inflation I expect further cuts.”

PBOT initial told the neighborhood it would be built in 2021 but now it’s not “anticipated” until 2024. The city also says the scope could continue to evolve up until that point.

Just because [someone] thinks a compromise is the best that can get done doesn’t mean we have to accept it. We can and should still say “no” if we aren’t satisfied.

Here is the solution: Sandy-Prescott: 2-way Bike path (12′) on the east side of the median adjacent to the median and no parking. This lines up the crossing at Sandy. Prescott to Killingsworth: switch the MUP to the east side; there are 6 intersections on the west side and only 3 on the east, half the right-hook opportunities.

On the graphic, the “MUP with landscape” graphic is a bad idea. THe landscape strip should be 4′ wide minimum to support shrubs and trees. PBOT will not mow the 12″-18″ strip shown, and it will just be bark mulch.

So PBOT has to make cutbacks in Cully due to cost, but just down the way in wealthier quarters it is at the ready with unsolicited plans.

There really are two Portlands.

These two projects have vastly different political and local/technical contexts.

If PBOT had announced plans to trim Better Naito by a third of its budget there would almost certainly have been a massive uproar. I think Champ’s observation that there are two Portland is right on target.

I get it soren. I know very well that PBOT treats different types of opposition and parts of town differently. That’s politics. I just don’t think Champs’ specific example is a very good one.

The politics aren’t dramatically different anywhere in town: some people don’t want any change, everybody wants that loud, fast road elsewhere but also convenient and exclusive to them.

If you could anonymize the location, decisions about where the city budgets its time and money would look arbitrary. One minute they come begging to a neighborhood asking them to accept a safety project, the next they tell mine there’s no money for plastic barrels. Another minute they’re saying that we don’t have traffic issues on our residential street, the next you can’t get a permit to close it because there’s too much traffic.

PBOT is not being singled out for this, it’s just the most visible.

We all queue up and take our turns but some places don’t start from the back of the line and it shows.

Apples and oranges. These two projects are at very different phases.

Mark in NoPo
Reply to  Champs

There are two Portlands: those who blame outcomes they dislike on third-party malice, and those who don’t.

The current plan in front of our house has gone from a 6′ sidewalk, a 4 foot planter, a 12′ 2 way bike path, another 4 foot planter and a curb to we are going to take some of those concrete curbs they use to separate parking spaces at the mall and just slap them down in the street. This is going to lead to lots of people parking in the bike path because the city won’t enforce parking laws, and it is embarrassing that a project whose scope is so slashed is going to be 3+ years behind schedule. Some money that was originally tied to this project was moved to another project when they decided to kill the grade separated bike path through the park blocks. It sure would be nice to have those funds still tied to this project now but instead we are seeing even more cuts to the project scope. This project has been extremely poorly mismanaged by city staff, it is almost like they don’t want a good outcome for folks outside cars. I advocated hard for this project with neighbors, but now I feel like I am the victim of a bait and switch.

As someone who rides between Cully Blvd and the I-205 path at least twice a week, the state of the current “bike connection” on Killingsworth and Prescott is terrifying and crossing 72nd and 82nd remains a bit of a cluster.

I’ve found myself riding on Sandy for 2 long weird blocks after getting off the 205 bike path at Parkrose/Sumner and then hanging a right on 92nd at the strip club before taking Going, before getting onto Prescott to cross 82nd. I’m a confident cyclist – I cannot imagine riding this connection with kids. I really hope better solutions will be made in Cully.

PBOT can’t do anything about the incredibly challenging bid market, but surely they could mitigate risk by moving projects forward much more quickly that they do? This three year delay will directly affect how far the funding goes.

I’m also really curious about how they plan to handle existing driveways; the plans seem to imply that the MUP will dip up-and-down, similar to SW Vermont Ave.

I think that by the time they get to the build phase the mup will be at grade with the street to enable further cost cuts.

They can’t afford to mow the grass or maintain the park blocks on 72nd, so why is this a surprise.