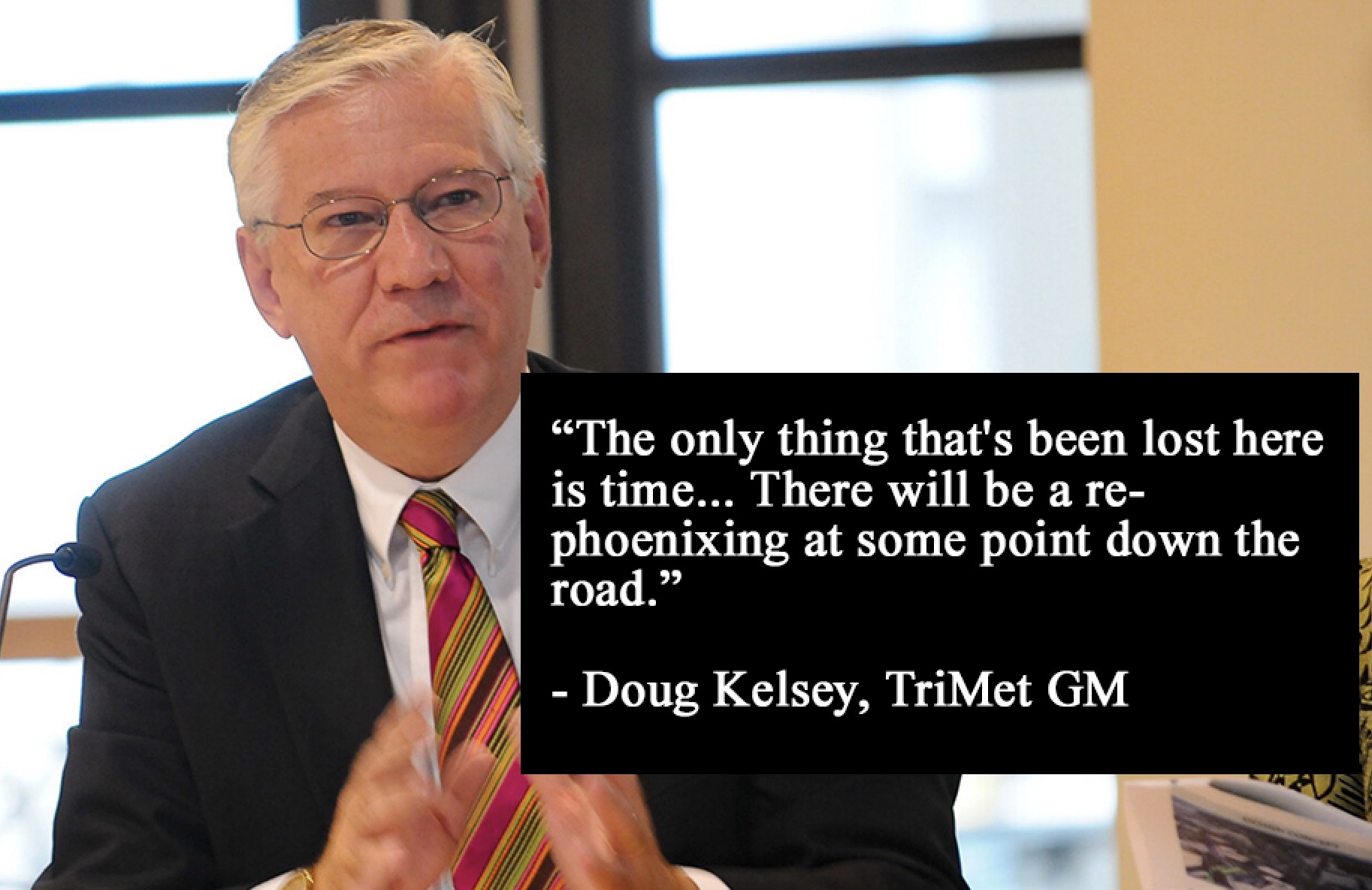 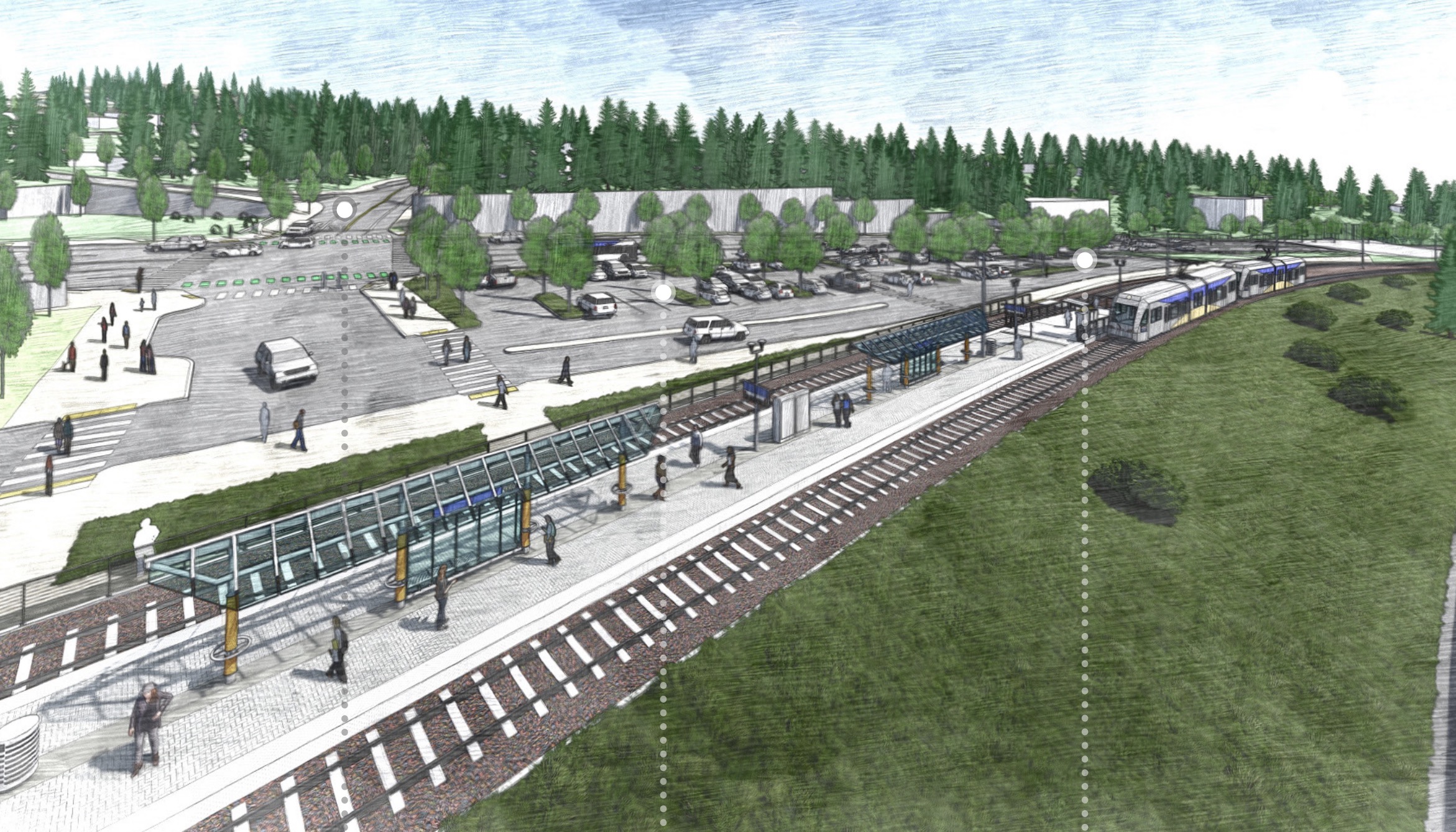 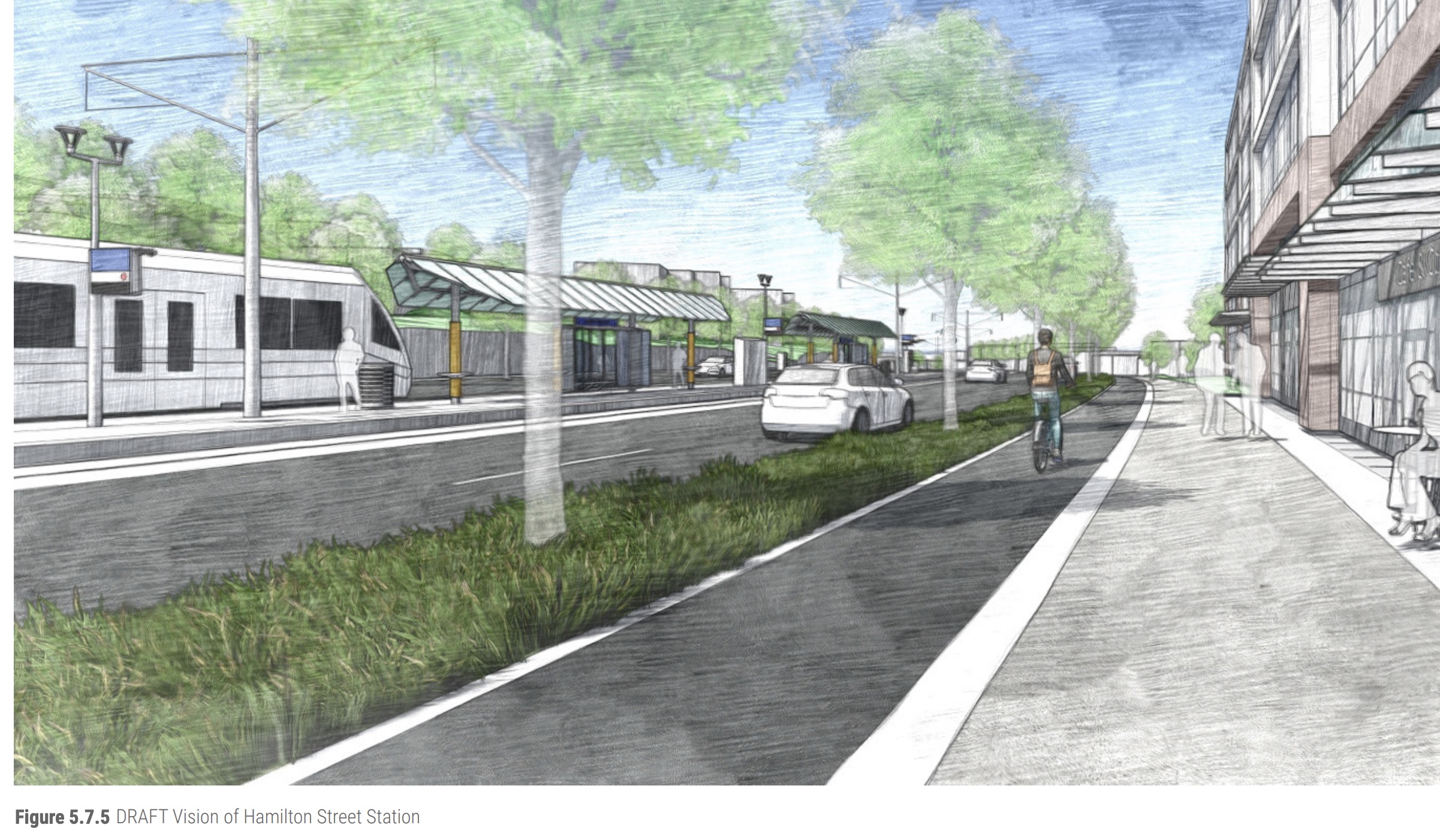 TriMet’s new SW Corridor light rail line will have a vast impact on how we get around the region — not only for where it will take us (without a car), but for how it will change the streets and neighborhoods it runs through. 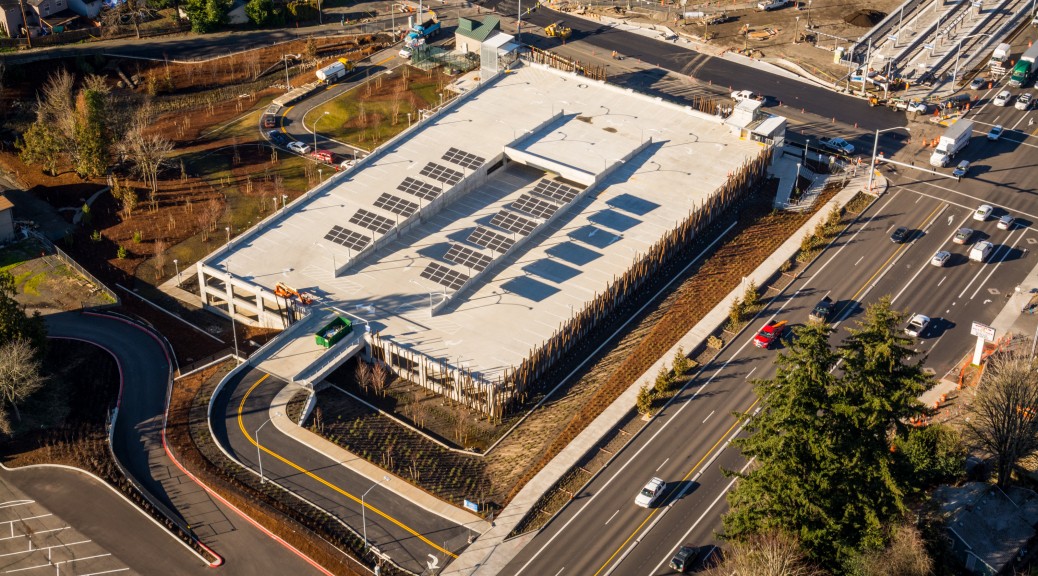 Editor’s note: This piece by former BikePortland news editor Michael Andersen is cross-posted from Sightline Institute. If you’d like to get involved in shifting tens of millions of dollars from parking garages to other ideas like protected bike lanes, affordable housing or bus improvements, there’s an important 15-minute public comment period coming up Monday, 9:10 a.m. at Tigard City Hall.

The people planning the Portland area’s next light-rail line seem to be steering away from a scenario where taxpayers pour $100 million of precious public-transit funding into a series of giant parking garages.

But unless the public speaks up in the next month, it’s possible that a handful of elected officials will push to build the garages along the “Southwest Corridor” through Southwest Portland, Tigard and Tualatin anyway—despite a mountain of evidence that spending the money on bus service, infrastructure for walking and biking, and transit-oriented affordable housing would do far more to improve mobility, reduce auto dependence and cut pollution. 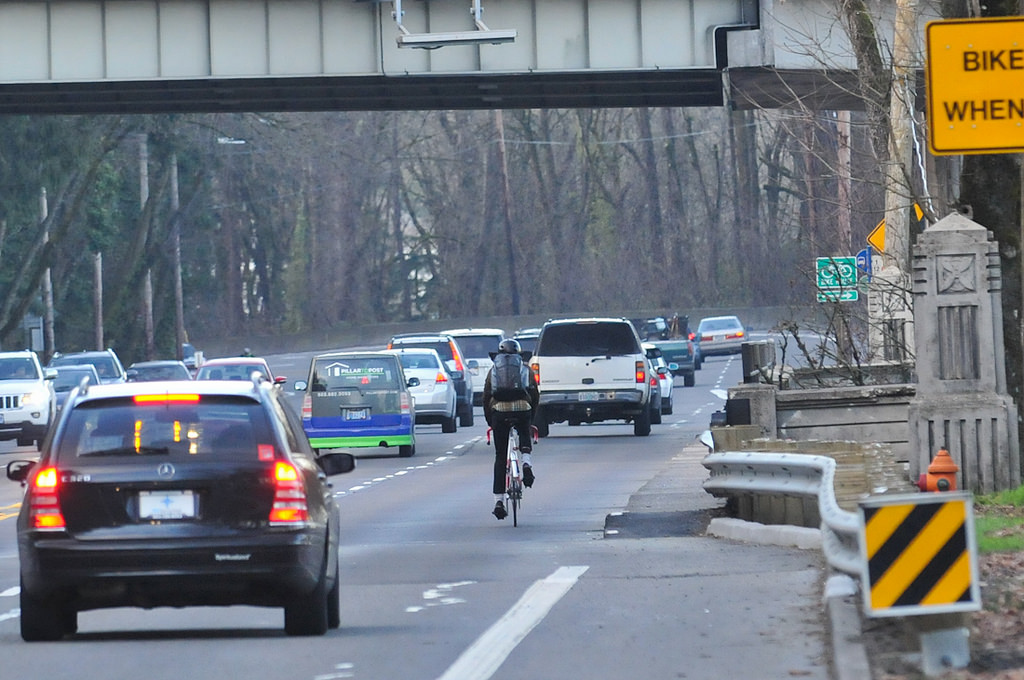 We finally have a bit more clarity around the future of the Vermont and Newbury bridges on Barbur Boulevard. 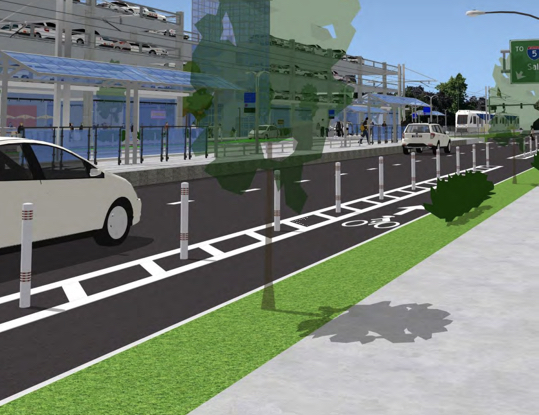 The SW Corridor Project has reached a major milestone with the release this week of its Draft Environmental Impact Statement — a required step for the estimated $2.8 billion, 12-mile TriMet MAX light rail project to receive federal funding.

The plan has been seven years in the making and once complete (possibly around 2027), the new line would go from downtown Portland’s transit mall to Tualatin via Tigard. As proposed, the route would go along Barbur Boulevard until the Barbur Transit Center (at SW Capitol Highway) and then cross over I-5 on a new bridge that would run southwest along the freeway to Tigard before crossing Highway 217 and heading south to Bridgeport.

When the Portland region has built previous light rail lines, new bike lanes followed. The Yellow Line up Interstate got us new (albeit crappy and narrow) bike lanes, and the Orange Line came with an unprecedented investment in bikeways. Throughout planning for the SW Corridor, active transportation advocates have watched closely and sat on advisory committees to make sure the project would result in not just a new high-capacity transit line; but high-capacity bikeways as well. 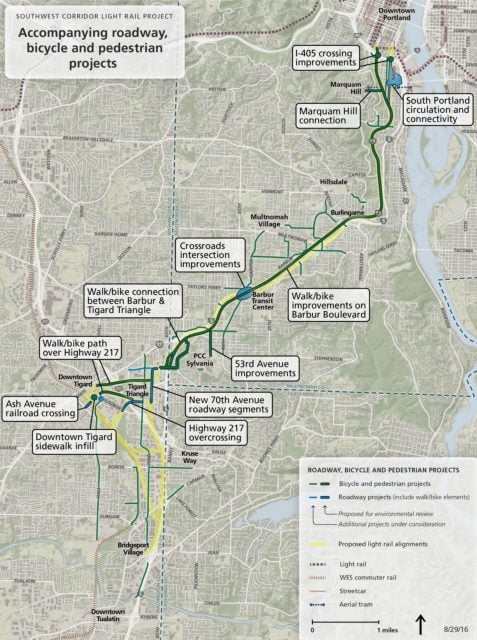 Metro map of additional bike/walk projects that could be included in SW Corridor Draft EIS.

Metro is moving forward on the SW Corridor, a project that aims to build a new, 12-mile long light rail line that will connect downtown Portland to Tigard and Bridgeport Village. 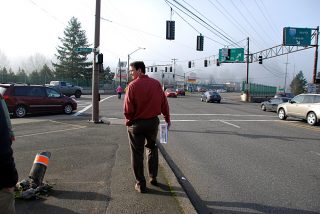 Long-term plans are falling into place for a federally-subsidized biking and walking upgrade to one of Southwest Portland’s most important main streets.

And oh, it might come with a rapid bus or rail system, too.

Staff at the regional agency Metro announced last week that they weren’t going to recommend a $900 million light-rail tunnel beneath OHSU, instead sending the proposed Southwest Corridor high-capacity transit line on the surface of SW Naito and Barbur as it passes through Southwest Portland toward Tualatin and Tigard. 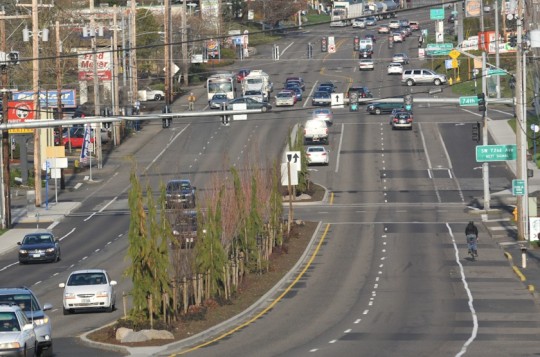 SW Barbur near SW 78th – just west of the section that might be rebuilt by a new transit line.
(Photo by J Maus/ BikePortland)

It would certainly be ironic if Southwest Barbur Boulevard became the first arterial in Portland to receive a Copenhagen-style protected bike lane retrofit through a high-destination commercial area.

But that’s exactly what might happen if a regional committee chooses Barbur as the best route for a major new transit line. And getting around outer Southwest Portland would certainly be transformed. 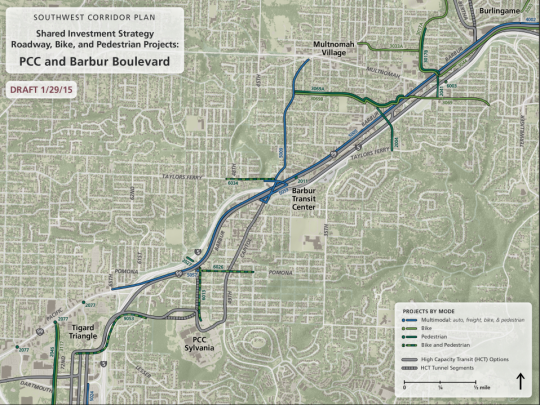 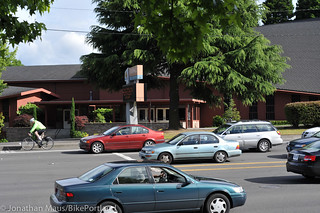 An anti-transit vote in Tigard Tuesday could bite bike plans, too.

When Tigard voters narrowly approved a ballot issue this week designed to make it harder to build a light rail or rapid bus line through their city, they also threw a wrench in a different process: improving biking in the suburbs southwest of Portland.

Metro’s Southwest Corridor Plan, a 20-year effort to expand high-capacity transit down the Barbur Boulevard corridor potentially as far as Sherwood, has also been seen as a way to get state and federal funding for a related project: a flat, comfortable bike route through the area such as a physically protected bike lane on Barbur Boulevard. 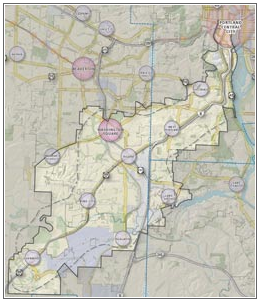 Map of the SW Corridor.
(Full map in a PDF)

Metro is holding a public forum tonight at the Tigard Public Library to collect input on the Southwest Corridor Plan.

The plan incorporates local and regional land use planning efforts along Barbur Boulevard and Highway 99 between downtown Portland and Sherwood. It includes improvements to walking, transit, and bicycle access in and around SW Portland, Sherwood, Tigard, Tualatin, Beaverton, Durham, King City, and Lake Oswego.