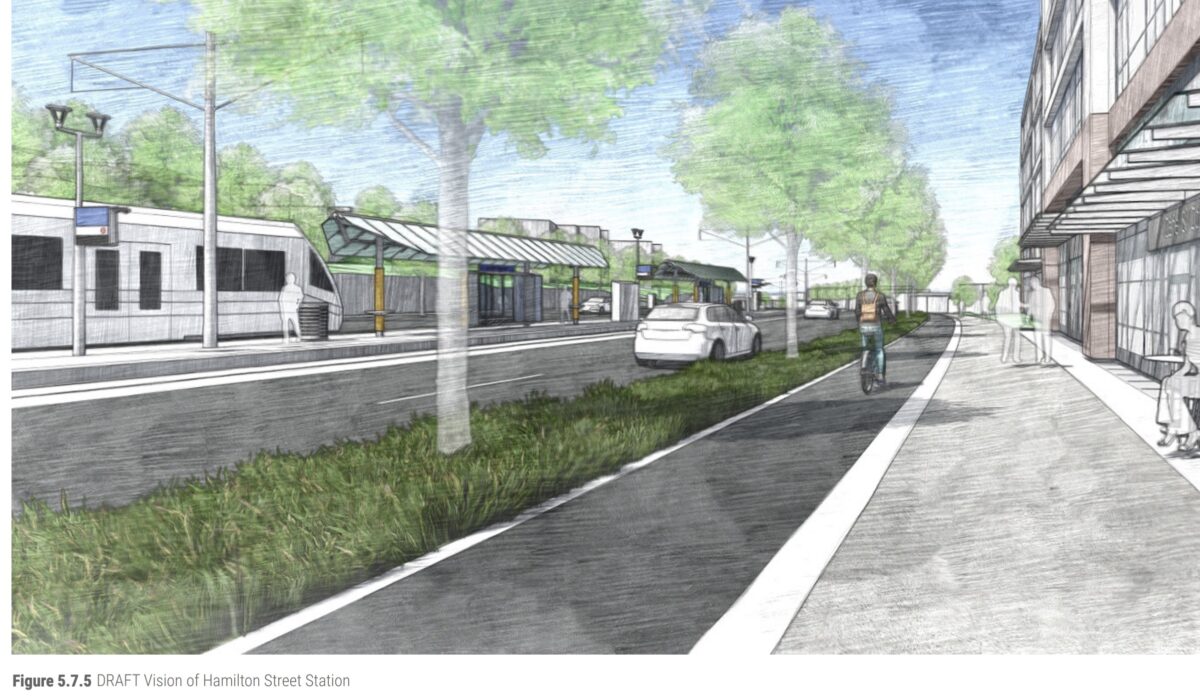 One of the raised protected bike lanes TriMet will build along the new SW Corridor line.

TriMet’s new SW Corridor light rail line will have a vast impact on how we get around the region — not only for where it will take us (without a car), but for how it will change the streets and neighborhoods it runs through. 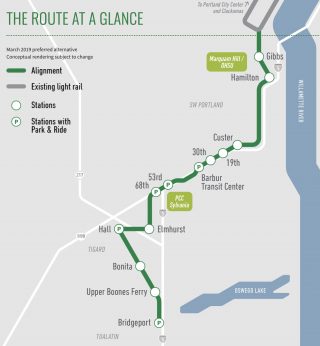 With the release of the project’s draft Conceptual Design Report this week, we now have the clearest view yet on what those streets will look like. If you haven’t followed every twist and turn of the planning process so far, the design report is a great way to catch up. If you ride a bike on or around Barbur Boulevard (a key connector, given the dearth of flat and direct streets in that part of town) you’ll be interested to know that the 12-mile, $2.8 billion project will add more than six miles of new cycling facilities — including over those two annoying and infamous viaducts south of Capitol Highway.

The design report reflects years of input and work by project staff. It’s just a draft however, and TriMet still needs public feedback to polish things off before releasing the final version later this summer. They’ve released an online open house where you can learn more and share comments.

Before sharing what caught my eye in the 220-page report, let’s hear what Ramtin Rahmani thinks.

“I wish TriMet took the safety and needs of pedestrians and cyclists more seriously on this stretch of road.”
— Ramtin Rahmani 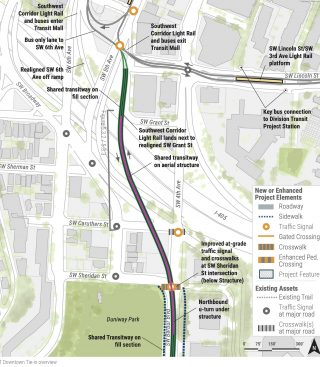 Northern terminus of the new line.

Rahmani lives in southwest and is on the project’s community advisory committee. Speaking for himself (not the committee), he said he feels like TriMet has done a good job listening to feedback and making changes thus far, but one area he’d like them to change is in how the new line will tie into the downtown Portland street grid.

“TriMet plans for a paint only bike lane [at Barbur/Naito and 4th] right as many bicycle commuters are reaching downtown Portland or leaving Portland,” he shared in an email today. “From my own personal experience, a bike route is only as good as its worst segment. I wish TriMet took the safety and needs of pedestrians and cyclists more seriously on this stretch of road. This is the flattest approach to OHSU and will also be used by many future bike commuters to reach OHSU via the SW Corridor connector. I’d like to see them work with PBOT and the Fire Department so that we can have, ideally, a curb protected bike lane.”

Rahmani’s other concern is the safety of people getting to the new line. He wanted raised crosswalks near stations and platforms, but TriMet doesn’t plan to install them. Slip lanes that remain in the plans — line the ones at Naito and Barbur, and SW Multnomah and 19th — are also something Rahmani is worried about because of potential turning movement conflicts. “Building a slip lane is antithetical to PBOT’s vision zero goals, and PBOT staff themselves have acknowledged that slip lanes should be minimized in use as they prioritize automobile movement over safety.”

Here’s what caught my eye in the 220-page report. 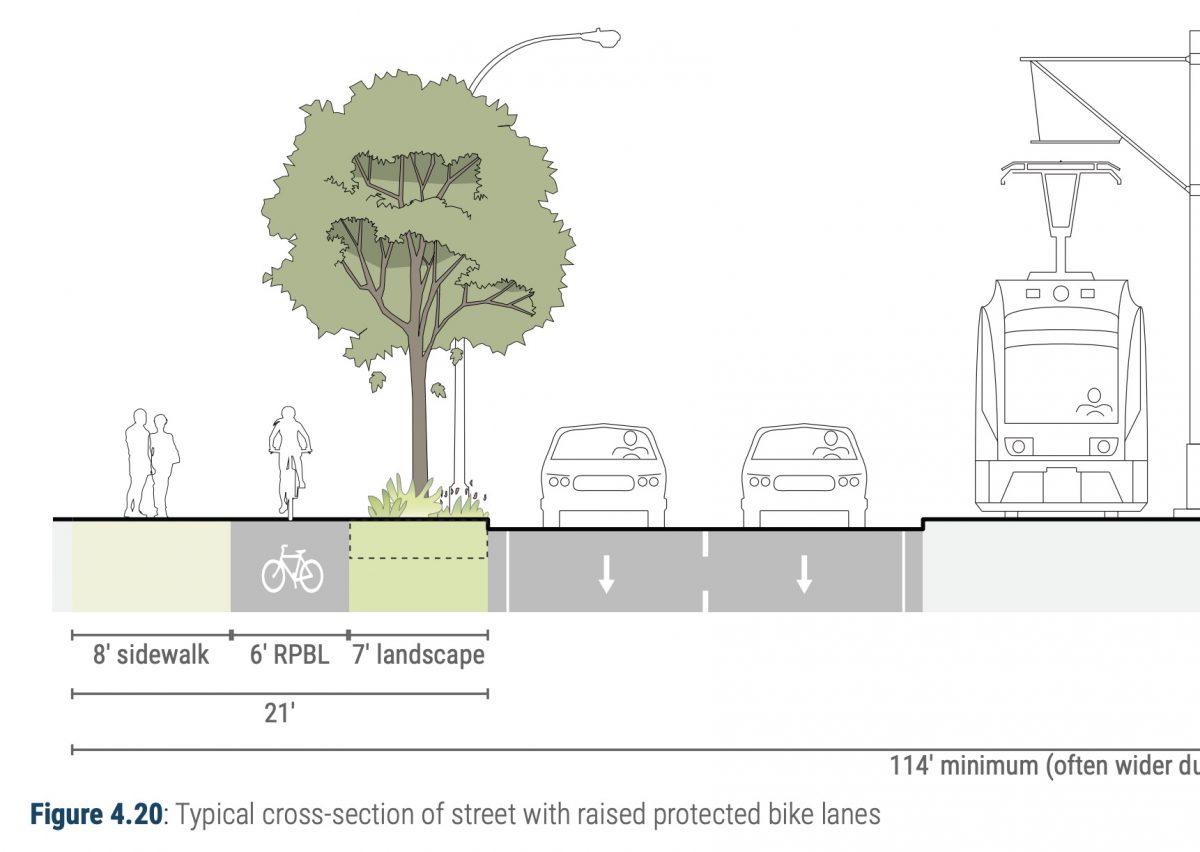 TriMet will add RPBLs (rolls off the tongue doesn’t it?) along the four-mile stretch between Barbur Transit Center and Naito Parkway. These lanes will separate bicycle users from other traffic by a “curb-protected furnishing zone”. That furnishing zone will include vegetation, lights and utility poles. Once complete, the new bike lanes will provide, “A seamless and continuous connection through Southwest Portland that serves a number of neighborhoods along the corridor,” says TriMet.

Here’s how they look from above: 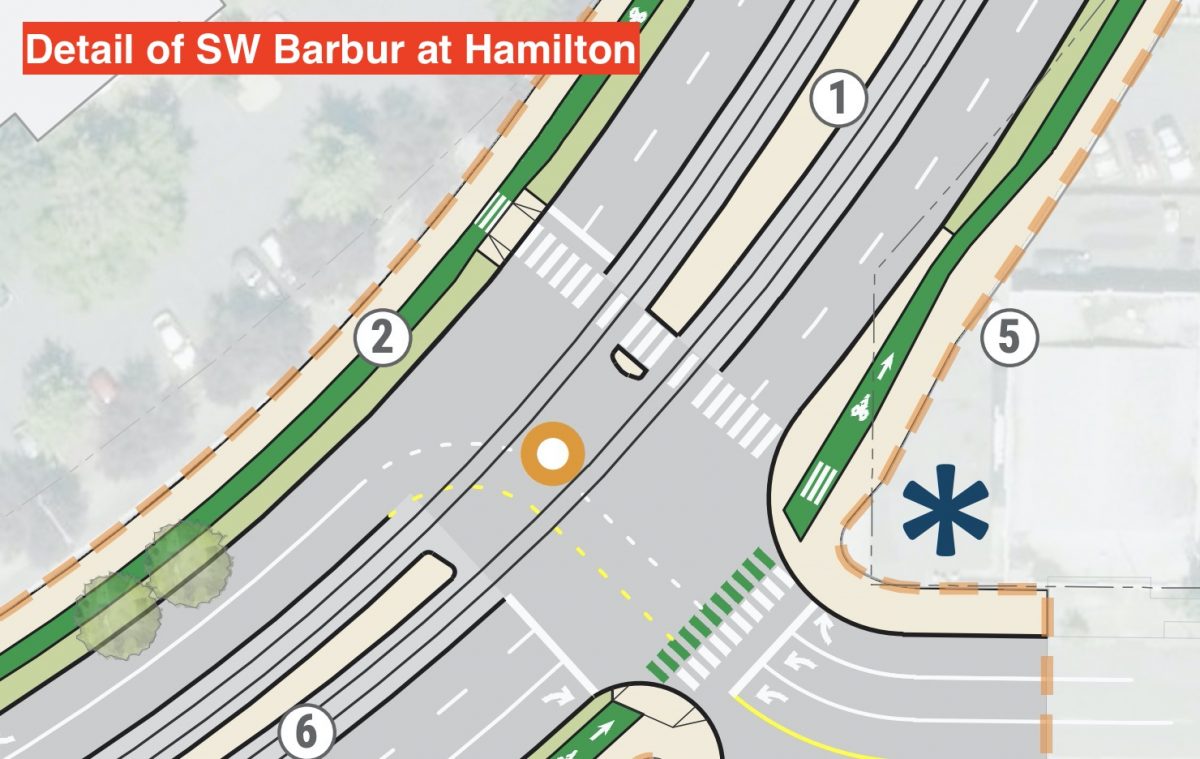 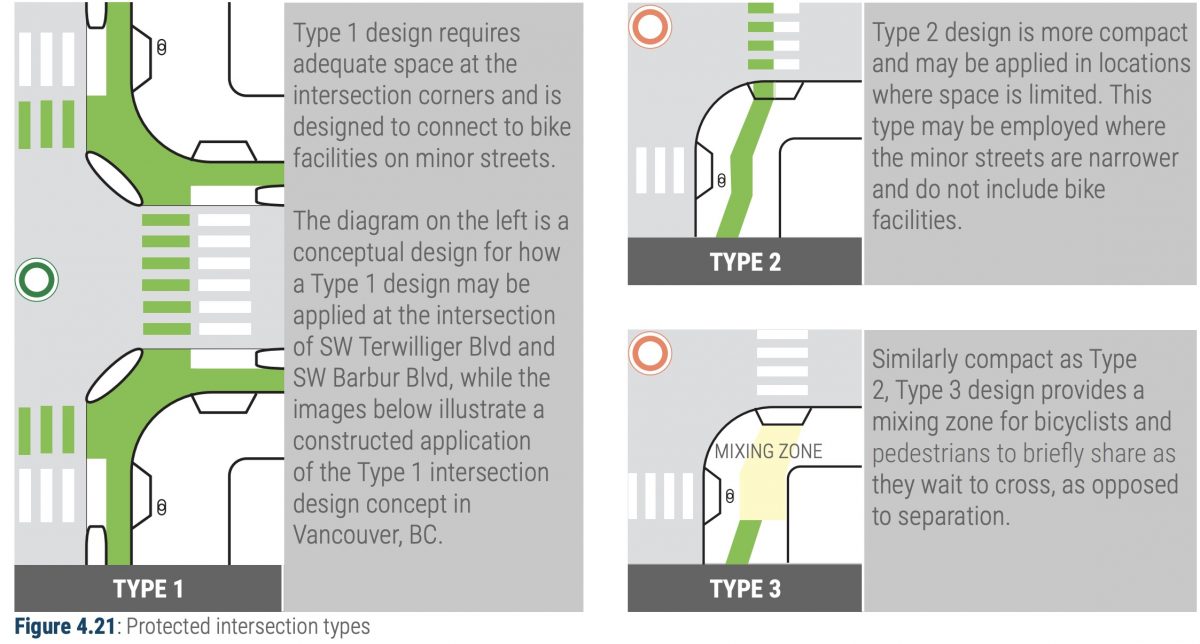 The project calls for 18 protected intersections where bicycle riders and other vulnerable road users will have space away from car and truck drivers. Five of these will be fully protected (“Type 1” in the plans) and 13 of them (Type 2 and Type 3) will have less protection because of limited space. To get an idea of what the Type 1 versions look like, roll over to PBOT’s work at NW Thurman and 20th.

It’s wild to me that in 2020 we still invest so much money to store people’s large personal vehicles. TriMet plans to build three new parking lots and add hundreds of spaces to existing ones. All the new parking would be added from Barbur Transit Center south. There could be nearly 1,000 parking spots at Bridgeport Transit Center. All this, despite the quaint “Station Access Hierarchy” graphic in the design report.

The bike lane gap on Barbur over the Vermont and Newbury viaducts south of Capitol Highway have been a very sore spot for bicycle riders for many years. This project will finally fix that with new structures and dedicated bike lanes.

Detail of design for Barbur at 19th (where Rahmani warned of a dangerous slip lane): 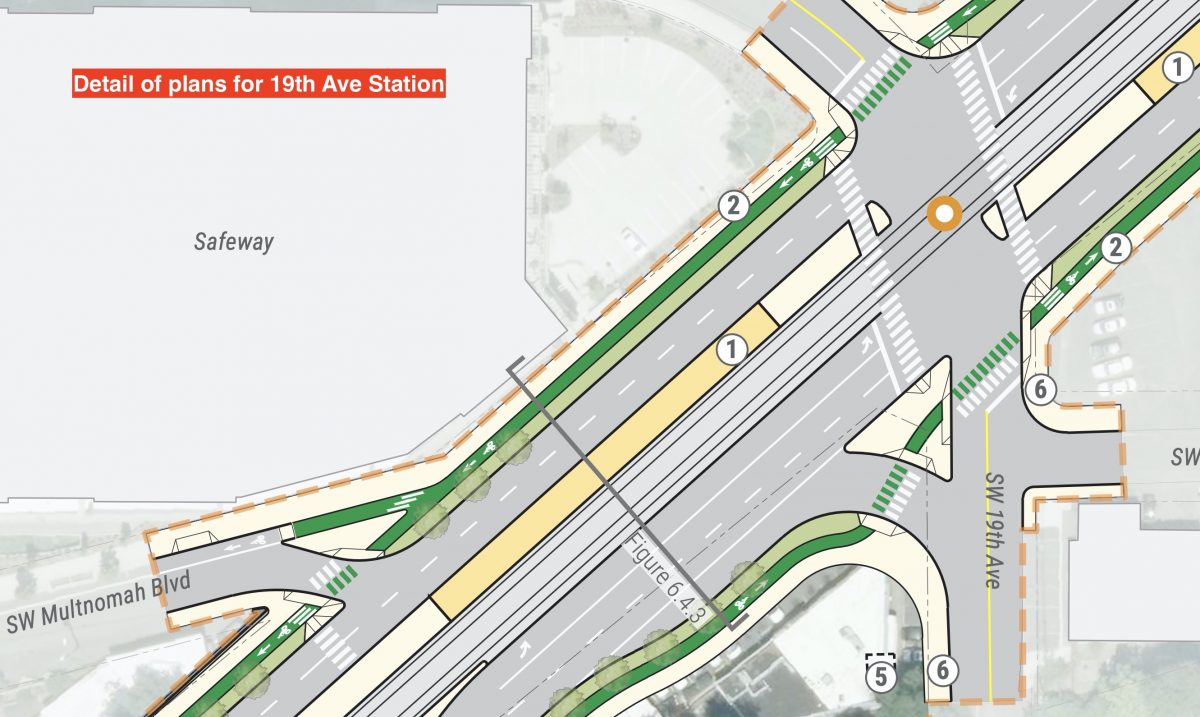 Before and after of SW Barbur at Gibbs:

To learn more about this project, the community advisory committee meets tomorrow (2/6) from 5:30 to 7:00 pm at Tigard Public Works Auditorium. You can also visit the online open house and download the full design report here. TriMet will also present the report to the PBOT Bicycle Advisory Committee at their next meeting Tuesday (2/11) at 6:00 pm at City Hall.

SW Corridor is expected to begin construction in 2022 and open for service in 2027.

31 Comments
« Willamette Week: Mayor could use Esplanade impacts as leverage over ODOT I-5 freeway expansion
Construction begins in March on major improvements to Gateway Green »