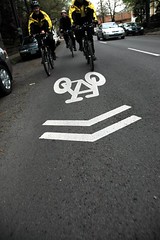 A sharrow in action on
NW 9th in Portland.
(Photos © J. Maus)

The City of Portland Bureau of Transportation and TriMet are discussing the idea of installing shared lane markings (a.k.a. sharrows) on the entire length of the new downtown transit mall.

Sharrows are a type of pavement marking that are placed on streets with relatively heavy and/or high motor vehicle speeds, where there is not sufficient space to put a bike lane, and where bikes and cars share the same travel lane (for more on sharrows, see this fact sheet published by PBOT). 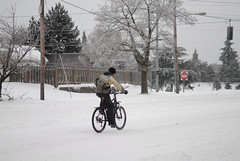 One of the worst storms in Portland
history is yet another strain on
the City budget.
(Photo © J. Maus)

Already on a downward slope due to a dwindling gas tax and lower parking revenues, and facing millions in necessary cutbacks, the Portland Bureau of Transportation is now feeling the hurt due to the severe storm that refuses to relinquish its grip.

In their daily storm conditions and report update published this morning, PBOT wrote that their annual budget includes one million dollars in “contingency for any type of emergency response”. The statement goes on to say,

“If you had to cut $6.4 million out of Transportation’s budget, how would you prioritize the following programs?”
— From an online survey put out by PBOT

Citing an expected shortfall of $6.4 million for the coming financial year, the Portland Bureau of Transportation (PBOT), through their Budget Advisory Committee, has launched an online Budget Prioritization Survey. The budget shrinkage, they say, is due to a “sagging gas tax and lower parking revenue”.