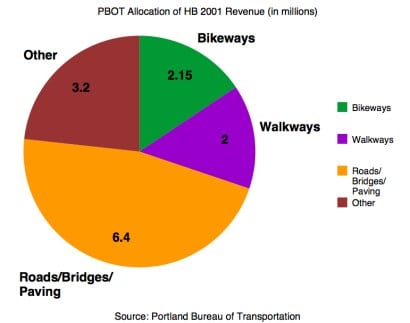 In the fiscal year that runs from June 2010 through July 2011, the Bureau of Transportation will have $14 million in new state revenue to spend thanks to the passage of HB 2001, the “Jobs and Transportation Act,” by legislators last year.

Back in January I delved into where they might spend that money, but now that they’ve released their official budget request to the Office of Management and Finance, I thought I’d share the detailed figures.

First, for a bit of perspective, the total PBOT budget request for 2010-11 is $245 million (13.4% of the total City budget). Of that $245 million, PBOT spends just over half ($133 million) on “capital improvements,” a.k.a. physical infrastructure. The rest is split into “operations,” “maintenance,” and “administration & support.”

Today I’ll focus on the $14 million from HB 2001. Here’s where PBOT wants to spend that money (keep in mind that PBOT is basing these priorities on decisions reached by the Safe, Sound and Green Streets stakeholder committee back in 2008):

High Crash Corridor Program – $300,000
This money would go toward improving traffic safety on 10 busy arterial streets that have a history of crash activity. Funds would go toward “low cost traffic control improvements” ($30,000 per corridor won’t go very far) as well as enforcement and educational efforts. (Since PBOT uses DMV data, these high-crash corridors only include motor vehicle collisions.)

Safe Routes to Schools Improvements – $230,000
This money will be spent on at least two schools that will receive “crossing improvements, traffic control changes, traffic calming measures, green street features” and so on. 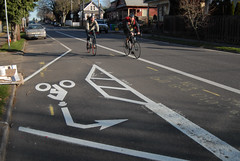 PBOT has already begun marking up
the pavement for the future
bike boulevard on N. Going.
(Photo © J. Maus)

Arterials with no Sidewalks – $639,000
These projects will focus on areas where sidewalks don’t exist and access to transit is needed.

Trip Reduction Program – $100,000
This would expand the amount of households that can be served by PBOT’s SmartTrips individualized marketing program that aims to reduce single-occupancy vehicle use.

Deficient Bridges/Overpasses (non-Willamette River bridges) – $1,000,000
This funding will go toward some of the City’s “poor and weight restricted bridges which are currently prohibiting the movement of freight and transit.”

City and Regional Priority CIP Match – $4,000,000
This money will go toward matching federal and state money that is coming to Portland for already approved projects. Below is the list of project and the amount of HB 2001 that will be put toward them (total project cost in parentheses):

According to my unscientific estimate, about $2.15 million of PBOT’s $14 million in HB 2001 money will be spent on bike-specific projects. Add to that about $1 million in local funds (from traffic citation and parking revenue along with grants from other agencies), $4.5 million in federal funds, and a $2 million per year “kickstart” fund coming from Mayor Adams, and PBOT is on course to spend almost $10 million on bike projects in the coming fiscal year — about 7.5 percent of their total capital improvement budget.

This is an impressive illustration of the relative expense of maintaining infrastructure for cars, and the large amount of public subsidy that keeps that infrastructure going. That’s our money, but are those our priorities?

Okay, not to be completely negative—it is great that so much of this funding is being spent on nonmotorized transportation for the rest of us. The city doesn’t have to do that and it’s great that they are making that choice.

That’s a great one for when you hear people complaining about on-street bike rack parking. When I am driving, I like the SmartMeters, but it’s worth pointing out how much we spend on ancillary motor vehicle infrastructure as opposed to bike/pedestrian services.

For a SHARED roadway system, this seems pretty fair and progressive. The tide is turning in favor of alternative transportation, Elly. Real lasting change is evolutionary in nature. Take you victories with grace and start working to get more in the next budget cycle.

those may not be your priorities, but you are hopelessly outnumbered and these funds are for the city, not just “for bikes”. I for one, love it when bad roads are repaved or city streets are repainted…both for driving and riding.
Please remember, you use the roads too…so roads/bridges/paving are actually for you as well.

“That’s our money, but are those our priorities?”

That depends on who you count as “Us”

Go read some comments from “the people” on oregonlive (and step outside of your bike culture bubble a little.) I think that you may have a skewed perception of who “we” are based on who you typically interact with.

I was pleasently surprised with how big the non-motorway slices of that pie are, even considering how small those slices are when viewing the overall budget, and considering how much further the bike money goes.

Dang, that’s a mighty big slice of the pie for human~powered travel! Keep investing and we’ll have the city we want soon enough. Ignore the car-culture whiners, they just need a bit more coaxing out of their cages. If you build it, they will come!

I’d add too, that those who think asthma-causing freeways and pollution/CO2 spewing machines carting everyone around are a viable life for this or any other city are the ones living in a bubble.

i do think the lane striping on northeast glisan is a problem, but i cannot imagine where they are going to fit a buffered bike lane. dare we hope that they will be taking out onstreet parking on one side of the street?

also, while williams may be one place where dedicating an entire lane exclusively to bikes might make sense, this has already been accomplished in some degree on vancouver. why waste further money putting a cycletrack in where there is already a six-foot bike lane and only one lane of motor traffic?

It’s hard to be as happy as I’d like to be seeing the PBOT’s balance start to tip toward ped/bike improvements in the face of upcoming TriMet rate hikes and service cuts. There is just something terribly wrong with this city’s priorities.

Challenging our funding priorities despite the majority of Portland wanting repaving and other auto-centric improvements is not without precedent.

Most of Portland was in support of the Mt. Hood freeway and thought light rail was a waste of money. Thankfully, a minority group of citizen activists and government officials went against public opinion and made the right decision. Sure, we have enjoyed a change in that perception over time, but some folks had to take a lot of risks to to where we are now. We see the same sort of fights going on now with the urban growth boundary, the CRC, and streetcar expansion.

I think Elly is right on the mark, even if you can’t stand bicycling or other forms of non-motorized transport. “That’s our money, but are those our priorities?” If that question is framed in a way that avoids special-interest budget speculation but in the greater context of “What city do you want to live in?” I think we might all find some common ground.

I don’t see the commenters of oregonlive representing “the people” any more accurately than on bikeportland. Both sides have implicit subjectivity when it comes to certain topics.

I find oregonlive comment discussion tends to skew racist, homophobic, xenophobic, factless and histrionic. Sort of like a homegrown FOXnews. Sure, it represents SOME people, but certainly not a majority.

That’s true Steve, and Oregonlive commenters (or commenters anywhere really) probably aren’t much of a barometer of what “most people” want.

I’d argue that Oregonlive attracts a broader cross-section of readers than bikeportland.

7.5% of the improvements are going to bikes.

I see two contradicting arguments here in favor of more $ for bikes than was allocated.

Argument 1) That’s our money, but are those our priorities?

Now if you reframe this argument completely, as you did, (in a way that avoids special-interest budget speculation, which is what we’re currently doing…) I tend to agree with you. However, arguing that only allocating 7.5% doesn’t represent what “we” want seems unprovable and unlikely. I mean, do “we” want the existing infrastructure to fall apart? I know some folks here wish 82nd was a dirt path… 🙂

Argument 2) “Ignore the car-culture whiners, they just need a bit more coaxing out of their cages.”

This argument implies that we should ignore the majority because they don’t know what’s good for them. Now personally I tend to agree with this! However, I don’t think that saying “this is what we want” explicitely excludes all of the dummies we should be ignoring as we drag them out of the dark ages and into bike-o-topia! It’s also a bit elitest and undemocratic, which generates a bit of political tension. I imagine that’s part of why defeating the Mt. Hood Freeway was such a rare victory

…and for what it’s worth, I rode my bike to work this morning.

I think that pie slice for non-motorized is superb, and hope it grows.

I wonder what % for bikes Elly would be satisfied with, and where she would take it from?

One question: what is the source of these funds, how is the bill funded?

are #9 — Glisan would go from 3 motor vehicle lanes to 2. As for Vancouver, i could be wrong but i think the cycletrack proposal is just for Williams. I know Mr. J Maus listed Vancouver as well but i think that may be incorrect?

I too have only heard of a proposal for a cycle track on Williams.. not Broadway. But for this story I was simply writing what I read in PBOT’s official budget request document, which states:

“… funds for the development and implementation of two cycle tracks at high volume locations. Possible locations include but are not limited to N. Williams – Vancouver…”

Oregonlive, LOL. Those bike-hating commenters are the same 20 out of work jerks from the suburbs every single article.

AaronF (#6) – thankfully, the commentors on Oregonlive aren’t in the majority. You’re right, though – depends on who you count as “us”. I’d go further than Elly and instead of asking “what ARE our priorities” ask “what SHOULD our priorities be?” We (society) have a tendency to plan for the present, not for the future. To a certain extent, that’s acceptable, because when forecasting the future we are most likely wrong*, but it’s possible to plan for the future from the standpoint of actively avoiding the outcomes we know we don’t want to see.

* Forecasting the future can almost never tell us what the future will be, because there are an unlimited number of possible outcomes, but only 1 actual one.

AaronF (#13) – The argument is logical, but there’s increasing evidence that the infrastructure we spent the last 80 years building is not sustainable at current replacement costs and wear rates. The existing infrastructure is likely fall apart whether we want it to or not, unless we’re willing to increase taxes and user fees, or reduce the amount of available infrastructure. Someone really needs to do a study on the estimated costs of maintaining infrastructure.

BTW, if someone wants to PAY me, I’ll do the study.

Hart (#19) – and half of them are the same people who post on a number of other local blogs. That’s why it’s so important for “reasonable” people to post to Bikeportland, Sam’s blog, Portland Transport, Oregon Live, and other sites – otherwise, the casual viewer who isn’t aware of that fact comes away with the impression that whatever is being discussed isn’t a good idea.