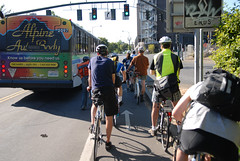 The City of Portland is moving forward with a slate of projects that will have a huge impact on the quality of our bikeway network. Tomorrow, City Council is expected to approve a $214,900 contract with Alta Planning + Design to begin the public outreach and design process on five projects in North and Northeast Portland.

The projects would bring what the Bureau of Transportation refers to as “a new generation of bikeway designs” to several key bike routes including N. Williams (from Weidler to Killingsworth), N. Willamette (from Rosa Parks to Woolsey), NE Holladay (from Wheeler to 9th — the Lloyd TMA has proposed making it carfree), N. Vancouver/Wheeler (the “gap” from Broadway to Multnomah) and the NE 12th overcrossing of I-84. 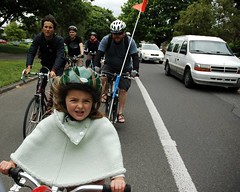 The contract will pay for a comprehensive public process and a full technical and traffic analysis for all the projects.

According to City Traffic Engineer Rob Burchfield, depending on the range of bikeway types recommended by Alta (some facilities are more expensive than others), the City could get to work and complete some of the projects this year. Burchfield says funds are already set aside for the projects in this year’s Capital Improvement Project budget (under the “Neighborhood Livability” category). Funds are also available from Mayor Adams’ Affordable Transportation Fund due to project money that wasn’t spent last year.

The availability of city funds for bicycle projects is due in part from increased state revenues from the passage of Governor Kulongoski’s “Jobs and Transportation Act” back in 2009. As we reported back in February, PBOT has an estimated $14 million in new state revenue — 2.15 million of which is specifically set aside for bikeways. The availability of funds also reflects Mayor Adams’ efforts to fund projects called out in the 2030 Bike Plan.

Among the money budgeted for bikeway projects in the current year, Burchfield says PBOT has $400,000 for cycle track development, $60,000 for the NE 12th Avenue overcrossing, $1.45 million to continue their work on bike boulevards, and $80,000 for improving bike connections through the Rose Quarter (the “Vancouver Gap”).

As the most significant projects to be developed since the passage of the 2030 Bike Plan, PBOT will be looking to build facilities that attract new riders (a.k.a. the 60% of Portlanders currently thought to be “interested but concerned”). The ordinance that will be in front of Council tomorrow states that the new designs will be “envisioned to make riders feel safer and more comfortable than they would feel in standard bike lanes.” This is likely to mean we’ll see some proposals for cycle tracks, buffered bike lanes, contra-flow bike lanes (where bikes go in opposite direction of motor vehicle traffic), and more.

Council will vote on the contract during their morning session tomorrow. It’s on the agenda as an emergency ordinance, because “a delay in beginning the public processes for the street design project development will result in lost opportunities and additional expense to the City” (according to the ordinance language). As an emergency ordinance, it needs four of five votes instead of the standard three votes usually required. If passed, the ordinance would go into effect immediately. More details on the City Council Agenda website. Stay tuned for more information about the projects.

Oooooh!! Casting my vote for a 2-way cycletrack on the Swan Island side. Can’t wait for the public meetings.

yeah, and don’t forget about all those baby-toting, trailer-pulling moms and dads and all those youngins’, older folks, and newbies who will also give biking a try with access to improved facilities. makes me sick just thinking about it.

I’m trying to keep an unscientific tally of funds expended against the Portland Bicycle Master Plan. The report is more comprehensive than I’m inclined to wade through, but am I reading this right?, that there is an additional $215k spent of the proposed amount? (I hate to even say $613 million, it’s so misleading.).

See, in arguments I’d like to say, “Nah, the PBMP is a plan to be implemented over 20 years. In fact, they’ve only spent $X so far.”, or some such. Again, non-scientific, just trying to keep mental track for purposes of being a dick…er…ahem…I…mean, dialogging with folks.

i’m fairly certain that the whole point of cycle tracks is to encourage short skirts and fashionable heels (not clogs).

hey now, some of us have skirts and fashionable clogs (with knee highs of course).

@BURR #2: I like being made happy by public works! Thanks for pointing out the potential satisfaction for me and my Dutch bike.

isn’t there a beach boys song about girls on dutch bikes? there should be.

More women in skirts on Dutch bikes, please! Come to think of it, on any bikes!

yeah, and don’t forget about all those baby-toting, trailer-pulling moms and dads and all those youngins’, older folks, and newbies who will also give biking a try with access to improved facilities. makes me sick just thinking about it.

Unfortunately, most of the proposed facility types come with inherent design flaws that do little to improve safety at intersections and other conflict points, so all they really provide to the novice cyclist is a false sense of security and safety.

After a while it gets quite tiresome explaining the inherent design flaws of these facilities over and over to the starry-eyed ‘true believers’; but the sad truth is that you cannot just plop down some Amsterdam or Copenhagenesque cycle track in Portland and expect it to be a safety ‘improvement’.

PBOT continues to move full speed ahead with an engineered facilities approach, and continues to fail to produce an adequate motorist and cyclist education component to address safety issues.

Who put the planners and engineers in charge? I think that’s a big mistake.

Thanks city council (In advance) for pushing all of these very needed projects through!