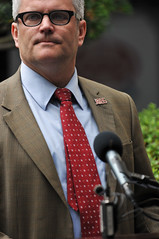 A story in The Oregonian published Friday (and an irresponsible Tweet by BikePortland) might have you thinking that Mayor Sam Adams — grappling with a tight budget at the Bureau of Transportation — has broken a promise to invest in sidewalks in East and Southwest Portland.

“Cracks have appeared in Portland Mayor Sam Adams’ pledge to build new sidewalks” is the opening line in The Oregonian story. In a Tweet about that story, I wrote “Mayor Adams backed off promise to build sidewalks due to budget.” “Not true at all,” Adams replied, “but I agree that is the impression the article falsely conveys.”

With historic cuts coming to PBOT, many in the community are watching Adams’ spending decisions — especially those that impact biking and walking — very closely.

What follows is more context behind Adams’ decision and how a local walking advocacy group is taking the news.
—

“There has been no change in the sidewalk commitment at all, it’s a timing question. We couldn’t get all the work out the door this year… it will get out next year.”
— Catherine Ciarlo, Mayor Adams’ transportation policy director

According to Adams and his staff, his support of that sidewalk investment is unwavering and the decision reported about on Friday is nothing more than a delay due to construction readiness.

The sidewalk funding issue revolves around a commitment Adams made to the Sellwood Bridge project last year. Adams set aside $8 million per year in new state gas tax revenue (for 20 years) to help fund the bridge. With the County unable to use that money until the 2013-14 fiscal year, Adams earmarked the money to build sidewalks instead — splitting the projects between Southwest and East Portland.

Even with much lower state gas tax revenues than expected, and with an extremely bleak budget situation looming next year, Adams’ office maintains his support for the sidewalk investment remains.

Yesterday, Adams’ head transportation policy advisor Catherine Ciarlo told BikePortland, “There has been no change in the sidewalk commitment at all, it’s a timing question. We couldn’t get all the work out the door this year… it will get out next year.”

Ciarlo added that design and project development work is currently being done on all of the five deferred sidewalk projects mentioned in The Oregonian article and all are expected to be completed by the end of the 2012-13 fiscal year.

As published in the Fall Budget Monitoring Process analysis issued by the City’s Financial Planning Division last month (PDF here), PBOT has decided to reduce its sidewalk investments this year by $3.25 million; but intends to increase its 2012-13 budget by that same amount “in order maintain the original program total.”

That same analysis says PBOT’s spending plans serve an “ambitious agenda” and that the agency’s spending “sometimes appears to out-pace external revenue sources.” Ciarlo says those spending plans were based on revenue projects from the state that simply didn’t come in as high as expected. “We now have fewer resources… But this particular piece [sidewalks] remains a commitment.”

At a City Council budget work session on November 1st, Adams was forced to respond to a question by a citizen activist who was concerned about sidewalk funding being eliminated.

“There is no change to the amount of $8 million set aside for pedestrian improvements,” Adams said, “the total amount remains $8 million…we have protected that even though we’re cutting other parts of the Bureau due to a reduction in resources from the state related to the economy…we have to cut that much deeper in the next fiscal year, but we’re not cutting the $8 million.”

The Oregonian story that broke this news also included a quote from Stephanie Routh, executive director of the Willamette Pedestrian Coalition. “It’s sad news, but it’s also tough times,” she told the paper.

Contacted yesterday Routh told us that her organization is “very disappointed that long-needed sidewalk improvements are slated to be deferred.” Routh, a member of PBOT’s Budget Advisory Committee, says she’ll work within the upcoming budget planning process to “ensure that funding for sidewalks are a priority.”

He has proven once again he is unfit for the job.

the election to remove this lame duck can’t get here quick enough.

I’m very frustrated that the sidewalk projects are delayed again. I consider the piece on SW Vermont between 30th and 35th a crucial missing link in the pedestrian AND bike network in SW Portland. In this stretch Vermont suddenly narrows to just the car lanes. Bike lanes disappear. The narrow side strip is gravel and often blocked with parking cars. It is a dark stretch of road, too. It is very dangerous especially at dark for both bicyclists and pedestrians. Because of the topography of SW Portland there are also no alternatives. PBOT has been working on improving Vermont in general, but the improvement of this stretch has been delayed over and over again. Two years ago PBOT was ready to at least implement a temporary solution and pave the side strip and remove parked cars to create some kind of mulit-use path. Though not ideal it would have been a big improvement. However, they were told to hold off and wait for a more complete solution combined with this sidewalk project. Now two years later it seems that the sidewalk is delayed again and probably the bike path as well. I think a solution to these 5 blocks would dramatically improve bike and pedestrian access to the Southwest Community Center, several schools, Hillsdale, commute downtown etc.

where do parking ticket fees go to? i’m sick of wrong way parkers and people parking across or on the sidewalk. start ticketing for this crap in the neighborhoods and raise *THOUSANDS AND THOUSANDS* of dollars in very short order. not enough to patch a huge hole but it can’t hurt and if you can’t park your car legally you deserve to be ticketed. parking is the easiest part of driving, come on!

Perhaps we could commemorate Sam and write his name in the sidewalk concrete while it is still wet?

They are not parking in the wrong place, they park on non-descript gravel side strip. This is not a declared sidewalk or bike path, just the only place left for pedestrians and bikers to go without being run over by cars.