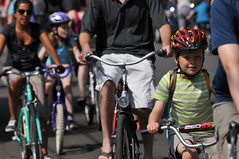 As reported last week by The Oregonian, the City of Portland faces steep cuts in its 2012-2013 budget.

“As a result of global, national, and local factors that may impact the City and the uncertainty surrounding the economic outlook,” reads a memo sent to all agency directors from City Council last week, “we are asking bureaus… to prepare significant program cuts for FY 2012-2013.”

While a more detailed analysis of the revenue forecast isn’t expected until December, the writing is on the wall — cuts will have to be made. The big question for is, where?

The Portland Bureau of Transportation (PBOT) has the added hardship of being faced with a decline in state gas-tax revenues. According to The Oregonian, Mayor Adams has asked PBOT to “slash almost $7 million from its budget immediately” due to a decline in state gas-tax revenue. Adams and his Council colleagues are asking all bureaus to prepare their budgets with cuts up to 8 percent.

In past years, PBOT’s Transportation Options Division and popular programs like Safe Routes to School and Sunday Parkways have been put on the chopping block.

Back in March of 2010, the City’s budget office told PBOT to scale back its Sunday Parkways plans because they couldn’t support the program “when basic services are being cut.” Parkways has had to work hard for its funding ever since it started in 2008. Options Division staffers have even had to resort to pleas for citizen donations. Sunday Parkways got $170,000 in “one-time funding” in the last budget cycle, that helped PBOT put on five events this past summer (at an estimated cost of $470,000 total). But that type of one-time funding is unlikely this time around and I wouldn’t be surprised if we see a big boost in private sponsorship of the event going forward.

In 2009, the Safe Routes to School program faced a 40% budget reduction. That threat spurred the community and the BTA into action. In the end, Mayor Adams found a way to restore funding for the program and the budget passed with smiles all around.

Will these cherished programs withstand budget scrutiny? How will PBOT balance its funding between repaving, streetcar, bikes, and the myriad other line items in its $219 million budget?

Making this coming budget process even more interesting is the Mayoral race. Not only will it be Mayor Adams’ final chance to influence the budget, but we can also expect to hear about spending priorities on the campaign trail.

Stay tuned. This budget season will likely be very interesting.

My prediction (it’s obvious, isn’t it?): They’ll cut the very things we need most right now, and dedicate the remainder to the same boondoggles that created the mess, in a last-ditch effort to prop them up. Everybody’s doing it, from the federal government on down!

I think this could result in a key moment for Portland active transportation advocacy… Leveraging the spirit of the Occupy movement, perhaps these budget decisions and the potential of losing important bike programs/projects will be enough to finally get people out in the street (or into meetings) to support active transportation.

We also have what’s likely to be a new majority on City Council waiting in the wings… so there’s a lot of opportunity for big changes imo.

Here’s hoping they look at it as a chance to give the finger to the people who have put us in this place – by stopping this all-inclusive laying down to the automobile industry and actually push policies that will give us more financial freedom.

I can’t honestly say I’m exuberantly hopeful, but there is some chance.

Sadly, all too realistic in this city, too, given it’s 40-year streak of overpromising and underdelivering.

Not a challenge, Spiffy, more of a dumb question: What motor vehicle programs could they cut, that would save money while not simultaneously detracting from other modes?

I wonder if they are threatening to cut Sunday Streets to get more support for their budget. I notice that government agencies often suggest cutting the most popular programs (libraries, parks, community events) to increase support for maintaining their budgets. Heaven forbid they lay off any highway engineers, or reduce the cost of the Sellwood bridge project.

The best way to raise funds would be to increase the cost of parking downtown. Right now street parking and off-street lots are very cheap, compared to downtown parking in other cities, and compared to the value of the land for other uses. (This is why so many lot owners rent out the spaces for food carts instead of parking).

Putting tolls of the bridges would be even better, but that requires the County to act (And this is one of many good reasons to merge Multnomah county with the city)

the best way to raise funds would be to extend metered parking to other parts of town like NW 23rd, SE Hawthorne, etc.

Are there not creative ways to bring road use taxes such as London’s zone type approach. Live in the 80th block of Halsey per say, drive a car daily into downtown, pay a rate of zone passage. I am under the impression the British adopted these tactic’s to regain public transportation flow. If bicycles pay a road tax as well so be it, in so much as impact, distance, and frequency is accounted for. I drive on occasion but do not commute to work by auto, i would be more than willing to pay road taxes based on usage. Is this a naive notion?

How about saving $4-5 billion by not building the CRC? 🙂

Our road maintenance backlog is currently at over $1 billion, and our deficit will only grow–UNLESS we make a wholesale change in our urban and even metro-wide transportation system. For every $1 we spend on bicycle infrastructure, it will amount to at least $10 that we will not have to spend on road building and maintenance, not to mention incredibly reduced health care costs and unimaginable increases in quality of life (for everyone–not just cyclists) if we increase our bike mode split to 25%.

Investing in cycling is something we very literally cannot afford NOT to do. Everyone benefits, including the car drivers who always claim that we don’t “pay our way.”

How much has Sunday Parkways actually done to push a new paradigm in transportation infrastructure? We know it has gotten folks out of their cars and that’s great; but beyond five select Sundays during the summer and early fall, how many of those people will be inspired to make a more permanent change in their transportation choices when the existing infrastructure in their neighborhoods doesn’t serve those choices?

Sunday Parkways as a fun time has been a huge success. Whether it has actually compelled the kind of change so many dream of in their responses to this blog remains to be seen.