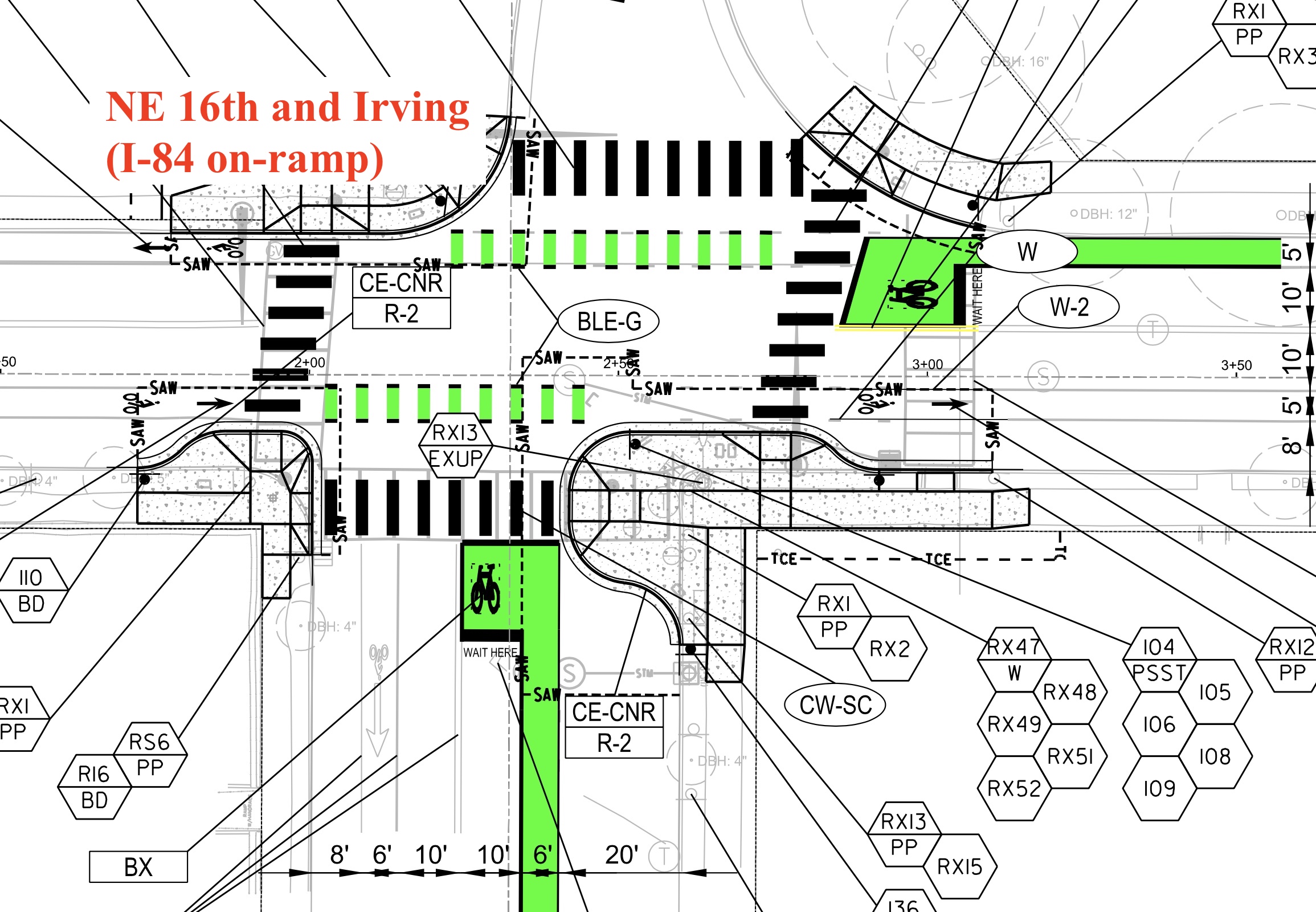 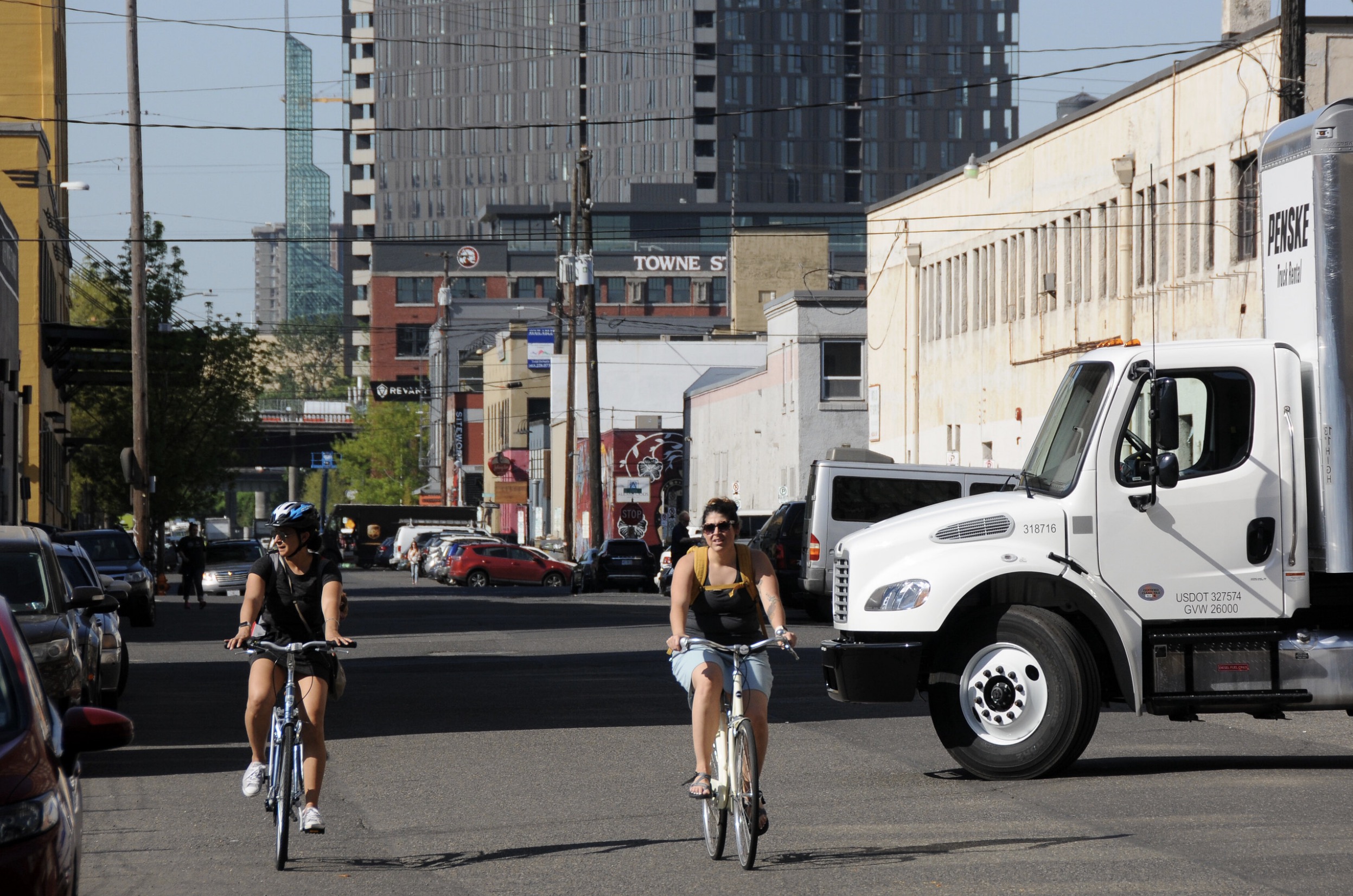 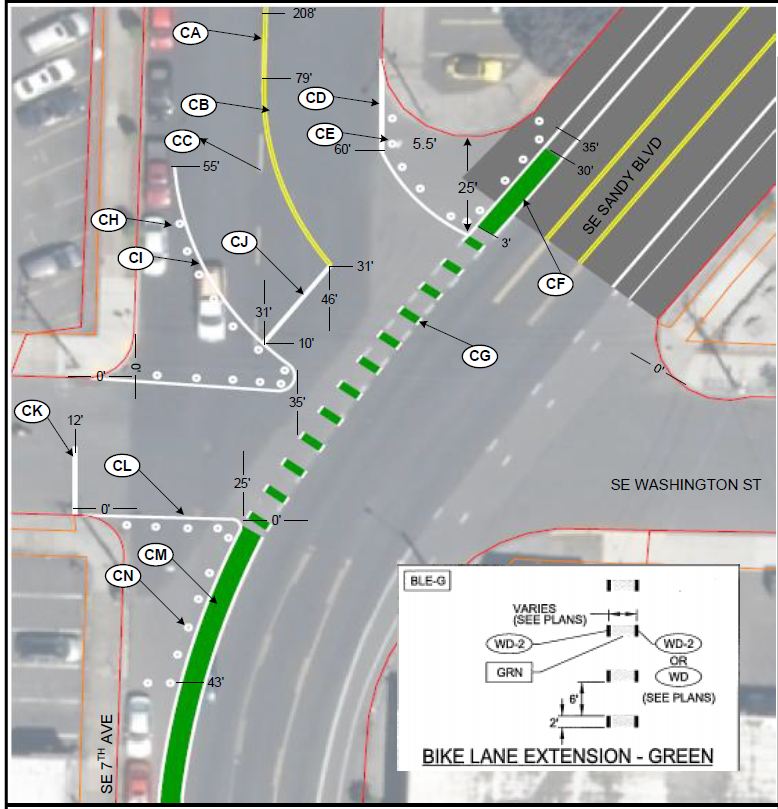 The Portland Bureau of Transportation is making updates to SE Sandy Blvd between Burnside and Alder. Sandy is being repaved, so the city is grabbing the opportunity to tweak the striping and add other features they hope will make the street safer. 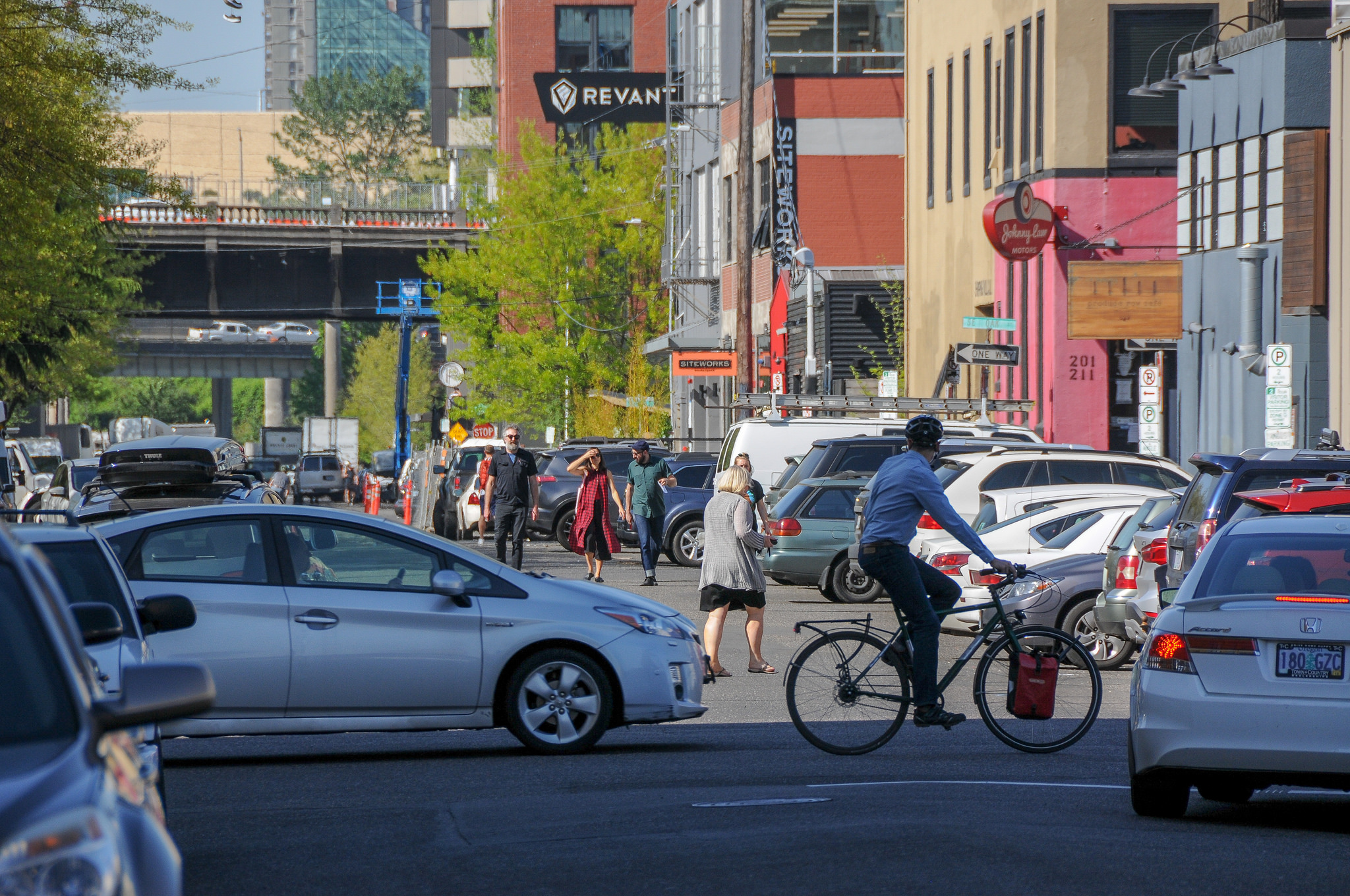 The Central Eastside Industrial Council (CEIC) says the city’s plan to update streets in the central city is moving too fast. The nonprofit is also urging its members to voice concerns over the potential loss of 250 auto parking spaces and fewer lanes for driving.

If Portland is to ever reach its transportation (and climate change and vision zero) goals, the Central Eastside Industrial District must evolve into a place where more people can safely and efficiently ride bicycles. Bordered by the Willamette River, SE Powell Blvd, 12th Avenue and I-84, this area is often avoided by bicycle riders. But now, after years of work by advocates and City of Portland staff, it appears there are some positive signs of change on the horizon. 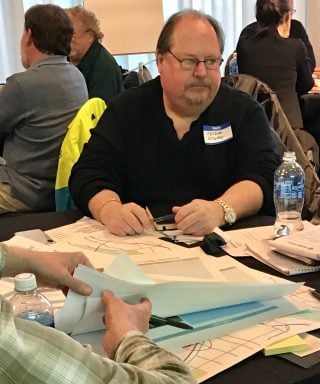 As the City of Portland looks to create a usable, low-stress cycling network in the central city, one of the toughest places to make it a reality will be the Central Eastside Industrial District. An area hemmed in by massive freeway infrastructure with a legacy of heavy industry and freight-dependent businesses, the CEID is in many ways the lynchpin of the Central City in Motion project.

One of the people standing in the middle of discussions about how to plan for the future of this district is Peter Stark.

Stark is a licensed architect who owns his own design and planning firm. He’s also one of Portland’s most well-known activists. Stark’s many civic endeavors include a position on the board of Portland Streetcar Inc., and he’s the founder and board chair of the Cornell Road Sustainability Coalition. In the Central Eastside, Stark has been a key player for over 17 years. He’s a past president of the Central Eastside Industrial Council and currently on the board as well as being the executive director of the CEIC’s Transportation Policy Advisory Committee.

I caught up with Stark after a meeting of the Central City in Motion in project last week to ask him about how he sees the future of bikes and freight in the Central Eastside.

The last thing we need on the infamous “Couch Curve” where it enters onto the Burnside Bridge is a new road that adds another layer of auto traffic into the mix. Thankfully that’s not going to happen. 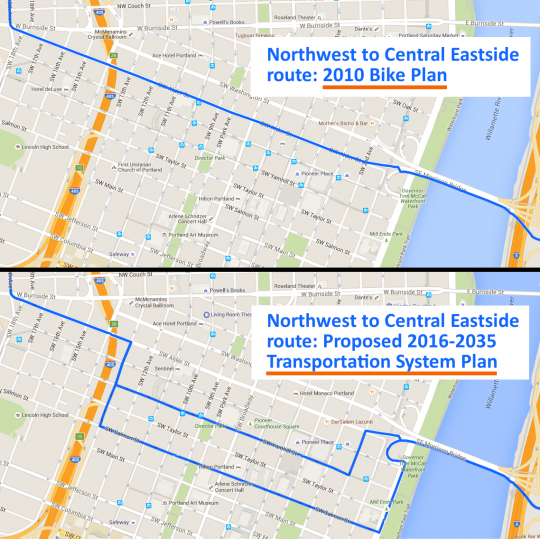 The city has proposed to change the future bikeway that would be the fastest dedicated biking route from the Northwest District to the Central Eastside. (People would be able to choose between a longer jog south to Salmon or a shorter one to a lane of Yamhill shared with cars, presumably with diverters to hold down traffic.)

The city says there’s no room for future bike lanes on the most direct street between Northwest Portland’s fast-growing residential area and the Central Eastside’s fast-growing job district.

Instead, inner Southwest Alder Street is slated to become a “trafficway” offering automobile and truck connections to the Morrison Bridge and interstate highways. 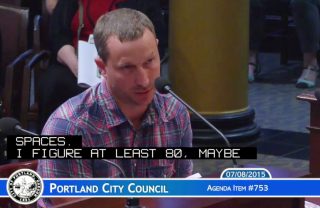 Here’s a business owner’s perspective that breathes some fresh air into the us-versus-them framing that can bog down so many discussions about bike infrastructure in Portland.

Yesterday we kicked off a three-part series about the past and future of the Lloyd District. The third post in the series, coming in several weeks, will focus on the many street changes the city is lining up over the next 10 years that could help the neighborhood finally reach its potential — first among them, probably, a new biking-walking bridge that’s been proposed across Interstate 84 at 7th, 8th or 9th avenues. 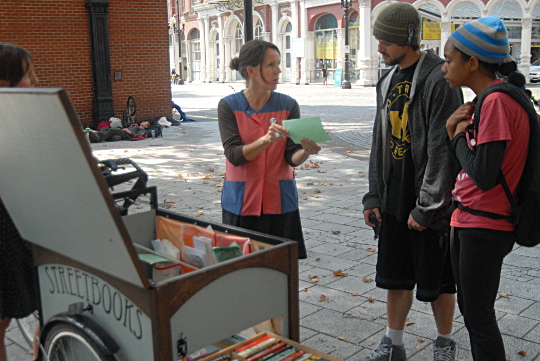 Splendid Cycles, the cargo bike store at the north end of the eastside’s Springwater on the Willamette path, will donate a new, fully built-up Bullitt cargo bike, and Jeff Lauten of Badger Bikes will donate a handbuilt water-tight box to match. 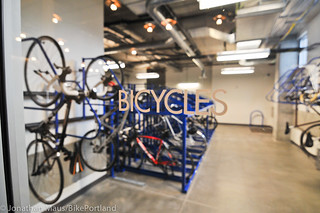 Since we’ve taken some shots at Oregonian news coverage lately, it’s worth highlighting a moment of bike-friendly perceptiveness in their coverage.

The first installment, back in January, included some interesting perspective of what it feels like to run a truck-dependent business facing the Taylor Street neighborhood greenway. This weekend’s focused specifically on the food industry, and mentioned bicycles in the most casual way possible. 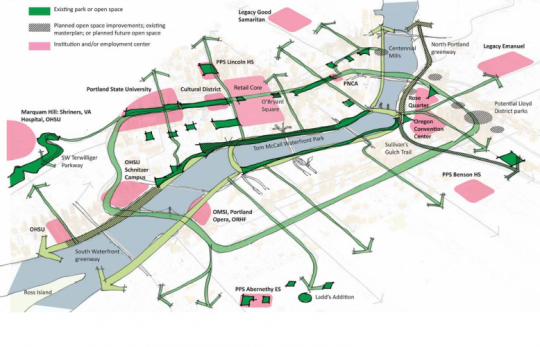 The vision for an all-ages bike loop linking the central city is slowly moving from sketch to blueprint. But where should it cross I-84, and which streets should it run on?
(Image: Portland Bureau of Planning and Sustainability)

City planners and stakeholders are looking closely at an unsolved problem of Portland’s central eastside: the route for a continuous north-south bikeway somewhere inland from the Eastbank Esplanade.

The leading options are, at this point, numerous and intriguing: Grand, 6th, 7th and 9th.

Planners are also looking, in closer detail than ever, at the possible options for a new biking-walking bridge over Interstate 84.