“This is a call to action to our city leaders to create more infrastructure that makes it safe for children to walk and ride to their bikes to school.”
— Sam Balto, bike bus organizer

Everyone knows about the neighborhood school bus. But what about a neighborhood bike bus (a.k.a. bike train)? That was the idea behind an event in northeast Portland this morning organized by Alameda Elementary School physical education teacher Sam Balto.

The first stop was NE Klickitat and 55th where several dozen kids and parents met up. When Balto told the kids that Principal Matt Goldstein was riding sweep (in the back), there were audible gasps. “Mr. Goldstein is here?!” they said with shocked looks on their faces.

Balto said bike buses have many benefits. Less obvious ones are how they help children become more autonomous by giving them confidence to navigate streets on their own. “As soon as I started sharing the idea of a bike bus [a group of fifth graders] organized themselves. So for the past month, they’ve been biking to school on their own, which is so exciting to see and I can see the big smiles on their faces every morning when they make it to school.”

And Balto is never one to miss an opportunity for activism. “This is a call to action to our city leaders to create more infrastructure that makes it safe for children to walk and ride to their bikes to school.”

Check out the video to learn more from Balto, see the huge turnout of riders, hear from a few parents, and even catch a glimpse of Mr. Goldstein.

For more bike bus goodness, scroll down below the jump to browse our photo gallery. Way to go Coach Balto! 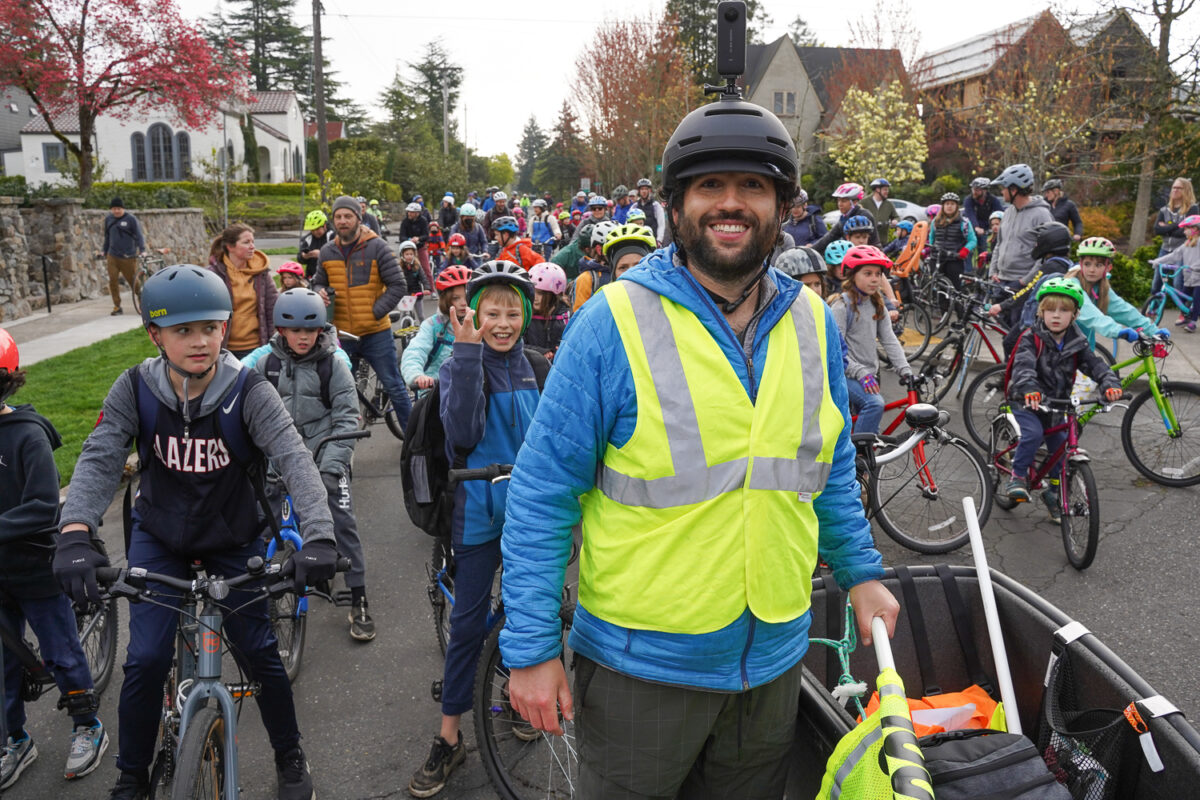 Sam Balto, beaming with excitement due to the big turnout.
(Photos: Jonathan Maus/BikePortland)

Thanks for organizing the bike train, Sam. And thanks for covering the story, Jonathan. It’s nice to read an uplifting story like this.

Love this. I’m always a little jealous that my kid’s PPS elementary doesn’t make any effort for this. That being said, the vast majority of students already walk/ride/take the bus. I’m trying to figure out how to get involved for next year to help facilitate something.

You’re my hero, Coach Balto! This is the kinda news a lot of folks need. Truly inspiring