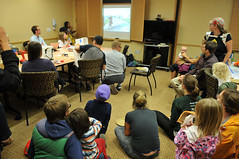 Portland’s grassroots movement to get kids and families to hop aboard school “bike trains” continues to grow. Last night 15 schools were represented at the second annual Bike Train Meet Up. That’s quite a jump from the four schools that were a part of a similar gathering last year.

The growth in bike trains is music to the ears of Kiel Johnson, the 24-year-old who has spearheaded the movement in Portland. Last night Johnson told the crowd of over 30 moms, dads, kids, teachers and other interested folks, that he was inspired to get more kids riding to school after seeing a video of a typical ride to a school in the Netherlands. 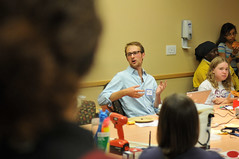 “If they can get 90% of kids biking to school,” said Johnson as the video played, “there’s no reason Portland can’t.”

As hope that change can happen here, Johnson shared the example of Beach Elementary School in North Portland’s Overlook neighborhood. Just three short years ago, that school had an official “no biking” policy, he explained during a short presentation. However, with a new principal, a few very dedicated parents and a solid assist from PBOT to make key roadway engineering changes, now Beach has one of the best Safe Routes programs in the city.

A bike train at Beach Elementary this past spring had 150 participants. 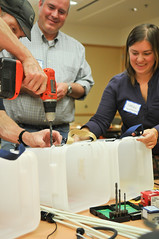 What if a family wants to join their school’s bike train but they don’t even have bikes? Johnson has a new Family Bike Rental program to overcome that barrier.

Thanks to a partnership with Sellwood Cycle Repair, for just $50 a month, any family can rent a full package of bikes and gear. At the end of the month, that fee can be put toward the purchase of a new or used bike from Sellwood Cycle Repair. The shop has also agreed to store and maintain the bikes as a gesture of support for the bike train program. 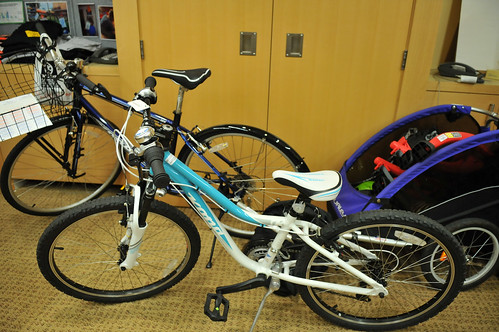 Bikes, a cargo trailer, helmets, u-locks, and a car rack are all part of a new family bike rental package.

Last night was a great opportunity to network with other bike train conductors and get new ideas about how to encourage more biking to school. There were large wall maps of recommended routes for each school that attended and the first 10 schools that RSVP’d were given a free floor pump and u-lock.

What’s next for bike trains in Portland?

There’s some discussion among veteran bike train leaders and PBOT Safe Routes to School staffer Clay Veka to coordinate routes into neighborhood lines instead of being school specific. In other words, there’d be a North Portland Bike Train with an established route and times. Anyone would be able to hop on or off the train at any point along the route.

In the end, it’s all about getting more people to bike to school — and feel safe — while doing it.

“People want to be able to bike to school,” says Johnson, “it is just a matter of connecting the dots to make it an option.”

Learn more about how to get a bike train going at your kids’ school at BikeTrainpdx.org or visit the Bike Train PDX Facebook page.

This is fantastic news! Excellent work everybody!

This effort has HUGE potential!

I’m looking forward to seeing a Bike Train at Astor K-8 in North Portland this year. I hope there are other parents there willing to lead the effort.

all it takes is just one person biking to school…

“toward the purchase of a new or used by from Sellwood Cycle Repair.” By should be bike. And how about a little love for Providence Portland Medical Center for working with Kiel and hosting the meeting? (Shameless plug.)

Not quite sure on the details of the rental/purchase/storeage, arrangement( which by the way seems very reasonable ) but, Eric at Sellwood is a pretty sweet guy who loves cycling. He is respected in the community by many, including his competitors. I am more than sure your snarky comment about Providence Hospitals help with the meeting place will be shown to be a small and unintended oversight.

Snarky? It’s not snarky. I just wouldn’t mind being mentioned and getting a little credit for the hospital. That’s all.

And the Sellwood reference was to point out a typo which has since been corrected. But thanks for the attitude.

@Matt… So sorry, I totally miss read your post. My bad!! oops. I was all happy to read about Bike Train growing and read it too fast while posting even faster!! sorry again,

the bike rental is very reasonable. families just get on a list saying that they are interested. when the bikes become available you go and check them out from sellwood for a month (only $50), try riding to school, and bring them back at the end of the month.

Kiel: First of all, good luck with your initiative. If you can increase the numbers of American children who cycle to school, this is a very good thing.

However, I’m afraid you’ve rather mis-interpreted my video. There are no “bike trains” in the Netherlands as they are not needed.

Virtually all children already cycle to school. The average age at which Dutch children go to school unaccompanied is 8.6 years.

If they don’t arrive at school with their bikes then they have a problem. The video shows children returning from a field trip by bike. There were two teachers, a class-load of children, and me. I went along because coming from the UK, which is rather like the USA in travel patterns, I’d never heard of such a thing as children going on a school field trip by bicycle.

In this case, they cycled to the city centre and back again. The excursion was in order to look at the architecture of the older buildings in Assen.

This is possible in the Netherlands because of a remarkable degree of attention to subjective safety as well as to actual safety.

The infrastructure of this country makes cycling a desirable thing to do. That’s the reason why sixteen million Dutch people make far more journeys by bike every day than 300 million Americans.

In future, if you’re not sure what a video is, please ask. We run study tours in the Netherlands to help people to understand how cycling works here. It would be great to see representatives from Portland coming in the future to see the true cycling culture of the Netherlands in Assen and Groningen. It’s very easy to misunderstand more than you understand unless you have a guide to explain things. We have the unique experience of having lived both in the Netherlands and in the cycle hostile UK which means we see more than most people do and can help groups to understand what they are seeing.

Recent visitors from the UK and Australia have been amazed as you’ll see from their feedback.

Thanks for commenting! I the idea of the bike trains came from some video about groups of kids biking to school somewhere in Europe, maybe it wasn’t the netherlands… One of the reasons I love to show that video is to show what a difference it feels and looks like to have a school designed around getting people to bike to school.

I showed this to a group of Oregon school bicycle safety people and they were in total shock that there is not a single person wearing a helmet in the video. The helmet debate is something I do not like to throw myself into. But this video really illustrates, especially for people in the US, that in the end you need better infrastructure and not a 100% focus on ensuring everyone rides with a helmet. In the end infrastructure is what makes biking to school safe and pleasant.

Someday soon I would love to visit the Netherlands and check out what it is like to bike to school. All we have are videos and hear say. The study tours link doesn’t work, would you mind posting that again?

Hi Kiel, the video you posted a link to in the original article is certainly in the Netherlands. I shot it, and my daughter is one of the children in the video. However, it’s not a bike-train but a school trip. Children arrive at Dutch schools on their own or with parents, but during the school day they ride bikes together as a class to visit sport facilities and to go on trips out into the countryside or into the city. The video is of one of these trips.

The concept of “bike trains” didn’t originate in Europe. It’s David Engwicht’s idea of the “Walking Bus“, but moved onto bikes.

Quite right too. It’s a great idea, but should be a means to an end, not an end in itself. Eventually you need road conditions which make children safe without them having to form “walking buses” or “bicycle trains”. That comes, as you know already, by improving infrastructure, not by strapping helmets onto children. Dutch cyclists are the safest in the world without helmets.

You may be interested to know that the improvement in conditions for all cyclists in the Netherlands since the 1970s came about in large part as a result of concern for parents about the safety of their children.

We’d be very pleased to have you come for a study tour. They can be organised at almost any date or time, though we suggest not the middle of winter as while almost everyone keeps cycling, it’s dark for much of the day and colder than Portland which makes for not entirely pleasant conditions for standing on corners to watch cyclists pass.

Here’s a repeat of the study tour link.