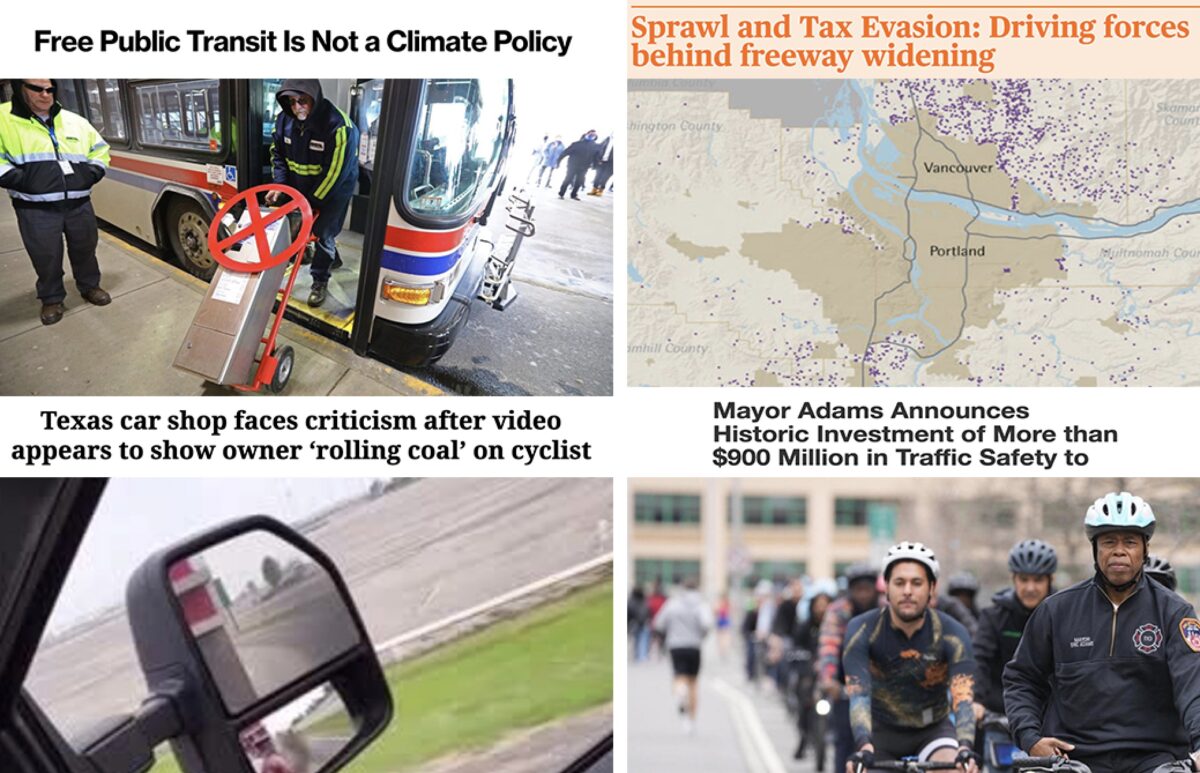 Free transit and the climate: If you think making transit free is a good climate change policy, make sure you read this article from Bloomberg that says it only pencils out if it’s coupled with excellent service that competes with driving a car.

Child safety jealousy: A Japanese TV show recently released on Netflix is making American parents jealous because it depicts young children navigating city streets on their own and it’s totally fine and normal.

Big move in Big Apple: New York City Mayor Eric Adams has committed more than $900 million over the next five years to tame traffic violence in his city.

A majority wants to walk in L.A.: A poll found that 83% of Los Angeles County residents want government to invest in more rail lines, and 60% said the city should create more bus-only lanes.

Drive less, rage less: Here’s another reason to drive less and reflect on what driving does to our mental state: Last year was the worst year on record for road rage shootings.

Dirty money: Environmental nonprofit Divest Oregon released a report last week that revealed the Oregon State Treasury holds at least $5.3 billion invested in oil, gas and coal companies. Is this why no one has stepped up to reform ODOT and stop them from expanding freeways all over the state?

Sprawl’s shadow: Freeway economist Joe Cortright says our analysis of the multi-billion dollar I-5 expansion project between Portland and Vancouver should include the role of people who have moved into exurban areas to avoid taxes and then want to drive their cars back into downtowns.

You get an e-bike! And you get an e-bike!: The latest programs to offer cash rebates for electric bike purchases are from EWEB (an electrical utility) in Eugene and the city of Denver, Colorado.

Direct-to-consumer woes: A woman is suing Rad Power Bikes because she said the assembly instructions for her bike failed to warn her about a loose stem that caused her to crash.

Rolling coal backlash: The driver of a truck who intentionally rolled coal on a bicycle rider and then posted about it on Facebook, got a big surprise and begged for mercy when people began to post negative reviews and boycott his business for his irresponsible, selfish, and childish behavior.

Soucie told the Star-Telegram in a phone interview that he was “vaguely familiar” with the video but didn’t “know all the details.” He said that he didn’t think the video was captured in McKinney, but near the city. He didn’t deny that he was the driver in the video, instead saying he didn’t want to comment.

“The only thing that I would say to that is don’t let someone’s personal actions affect the place of business where they work at,” Soucie said, saying he didn’t want to comment any further over the phone on the video or the response from the community.

‘I don’t know what video you’re talking about, and if a video exists, it wasn’t me, and if its obvious its me, please don’t try and make me face any consequences for my actions’

I looked up his biz on google. The only thing worse than what he did, are the very recent 5 star positive reviews from his buddies/customers and their cyclist-hating vitriol. “Harmless prank” “Cyclists are cancer” “enemy of my enemy is my friend” “Damned if I don’t hate cyclists from the bottom of my heart”…ugh.

It ain’t just Texas. It’s America. I bet you’d see similar rhetoric from people around Oregon, and many in Portland.

I think this is the key quote, at least for me from the Free-Transit article:

“If you take bad American transit that costs $1.50 and make that bad service free, that won’t move the needle enough to make a climate impact.”

Until TriMet, and well the regional governments, vastly improve service people are still going to drive. There needs to be more dedicated bus lanes and a push to make the service “safe” in the eyes of the people who currently think it is “un-safe”.
For me personally, I hate taking the MAX, but downtown parking is so expensive, and my work subsidizes my monthly pass, I take it. If parking was cheaper I do that instead in a heart beat.

I was on the Max on Saturday, and saw one woman down most of a bottle of tequila between Lloyd Center (where she got on) and Skidmore Fountain (where she got off, thankfully). And another guy (apparently high or drunk or both), after about 5 minutes of trying, finally got his cigarette lit and started puffing away in the middle of the train. Other passengers were clearly uncomfortable, but no one was willing to risk a confrontation to ask him to stop.

All in all, a tamer trip than usual.

Chris I
Reply to  Watts

PdxPhoenix
Reply to  Chris I

I’ve been on a train & checked 4 or 5 times this winter. Even once on the bus in the morning, for some reason.

Yes, but an occasional fare checker will do little to deter the type of person that will light up a smoke or chug booze on a train. The worst consequence they are likely to face is momentarily getting kicked off. Even the ‘trimet barber’ was able to repeatedly get in trains and buses after receiving a felony conviction and ban from the system. Without fare restricted access areas and real punishment for rule breakers, a handful of enforcers don’t do all that much.

Yeah, and I like the people who claim that by having the train driver it makes the ride safer . . .
I just shake my head and realize they’ve likely never ridden the train.

Yeah, I would never risk a confrontation either, I value my life too much.

I can confirm, when we started the no fares push, it was not for climate change objectives it was for equity based objectives. It came out of the push to get fare guards to stop going after people of color and that one issue when a Latina had a different last name told to cops vs what was on her id. I was on the call.

Nobody ever did a back of the envelope about how that would SUBSTANTIALLY change the entire public transport network on a whole range of levels.

Nobody ever did the math on what that meant for the network improvements. We just assumed it would speed up network since ticket fares slows it all down.

Obviously filling up the entire public transit system with people just trying to stay warm or on drugs had some unintended impacts to the ‘rideability’ of the system.

This is what happens when a bunch of “purists” don’t listen to the technical experts sitting next to them. I’m looking at you AVT.

I’m not a ‘purists’ I’m a technical experts with decades of experience, and 5th generation Oregonian. I’m not sure how playing the stock market makes R.A. a community leader.

AVT land acknowledgements, without the inclusion of any Indigenous voices on decision making matters, is a sham of inclusivity.

Please proofread before posting. The misplaced plurals, insider context, red herrings (stock market?) and unknown initials make the post read like in-crowd code. I guess the intent is that ‘the transit system went to hell with the best of intentions’, and that ‘I was right and you (AVT) were wrong’.

I’d really love to know what you’re talking about, because you’re hinting at interesting things, but I don’t understand some of the references and sentences.

Great article by Cortright on the contribution of sprawl and tax-evasion to I-5 bridge traffic.

If what we have is really more a social problem than a physical one, perhaps the solution is also a social one.

Imagine either Washington changing land use laws (hello, Washington environmental orgs!) or Oregon enacting some kind of special sales tax just for Washington residents (even if 100% of the funds raised were just handed over to the State of Washington, that’d still be a better financial deal for Oregonians than paying for a bridge to further facilitate cross-state shopping trips).

Regarding Cortright’s Article…its more complicated, as to “the why” there are more people moving to Clark County etc…many of the newcomers stopping by our family bar (Downtown Vancouver WA) during each of the periodic out migrations are fleeing / pushed from Oregon, primarily Portland and not from California. Yes, sadly Clark County has become the “relief valve” for many big things that people cannot find (or don’t want) on the south side of the Columbia…vs just taxes. And as for taking the CTRAN Express buses…I am always shocked at how many of my Portland transportation geek friends that do not know about it…much of that I ‘blame’ on TRIMET not co-marketing it to Oregon employers and just folks walking along the Portland bus mall.