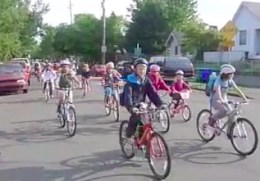 Still from a video shot of this morning’s
bike train at Beach School.
-Watch it below-

Like a cycling tsunami washing over North Portland in several waves, students (and parents) from Beach School showed, once again, just how inspiring and effective the local bike train movement has become.

And — on a week where we read with disbelief about a group of seniors suspended for biking to school (thankfully, the school principal has apologized), Congress played politics (yet again) with Safe Routes to School funding, and yet another school banned biking completely — news of Beach’s bike train couldn’t come at a better time.

Beach parent Bryn Dearborn reminds us that this is the third annual massive bike train the school has organized (smaller, yet still impressive ones, happen every week). He said well over 100 people showed up and both the school’s principal and vice president participated.

Check out the action in the video below (sent in by Bryn):

Believe it or not, there remain many schools across America where it’s prohibited for students to bike. The reason? Surrounding roads are deemed too “unsafe” by school leaders.

What’s amazing about Beach’s story, is that 10 years ago, biking was prohibited their too. It wasn’t until people in the community got organized, the City put a neighborhood greenway outside its door, and a new principal who “got it” stepped in, that things turned around.

Now, Beach is a national example for kids biking to school and the positive impact that can come from a strong collaboration between a city, its citizens, and a school.

Awesome! Makes me want to have kids. Or a business that sells child-sized pannier/bookbags. Either way.

As one of the parent / participants of the bike train, I can say that the individuals who established the Bike Train at Beach have done an amazing job of growing it every year. There is now an after school bike club, which teaches kids to safely ride and maintain their bikes, pedestrian safety education and a strong bike and walk program. We personally know many people (kids and adults) who had never been on a bike but now are at least occasional commuters.

The feelings of empowerment, confidence and freedom that our kids have developed from biking are awesome to witness.

It’s great to read here in the comments, word from a parent that’s actually riding with the kids to school.

100 kids to safely escort together to school on bikes is getting to be quite a sizable number. There may be some challenge in this, for example…watching for cars exiting and entering driveways, and in the group proceeding through intersections. As one of the parent / participants of the bike train, perhaps you could offer some details about how people supervising these rides are managing this number of kids together as they ride along the street.

i love that my commute brings me past Beach. I didn’t catch the train this morning, but there is always so much energy in the mornings with all the kids walking and biking around me. Big high five to all the people who help make this happen.

that’s an awesome sight! I can only hope my kid bikes to school when he’s old enough…

As a parent, you will have more tools than hope, I hope.

“there” not “their” in 2nd to the last paragraph.

Nicely done to you Kiel!

This is the principles last year.

Knowing that there’s thousands of kids in Portland that are growing up in a bike-centric environment gives me hope for the future of the world.

It’s easy to be a follower, but what we really need are more leaders like these, who go off into the uncharted and find that its a wonderful place.

Middle of What Road?

I’ve recently noticed a small bike train sometimes gathering up on Going in the mornings around NE 20th or so. Always brings a smile to my commuting face.

Sadly there really are parts of town that are not safe for bikes. I live near an elementary school out here in east PDX and there is no speed enforcement nor will the city help in anyway with expensive traffic calming. I would not encourage a child to ride in those conditions. Great for you if you have it, but we’re pretty much ignored out here.

Tom B. was may daughter’s principal back at Da Vinci Middle, & he’s simply the best – Way to go Beach!

A big “thank you” to the city who improved engineering around our school and slowed traffic on Alberta and several other cross streets. I have had kids at the school since the “illegal to ride” days on into the early appearance of bike trains. Yes our principal is fantastic, but the current success of bike/walk to school is not just because of him; it is the result of a lot of hard work by parents, teachers, City of Portland, and Safe Routes to Schools.
Now let’s get some traffic calming out east!