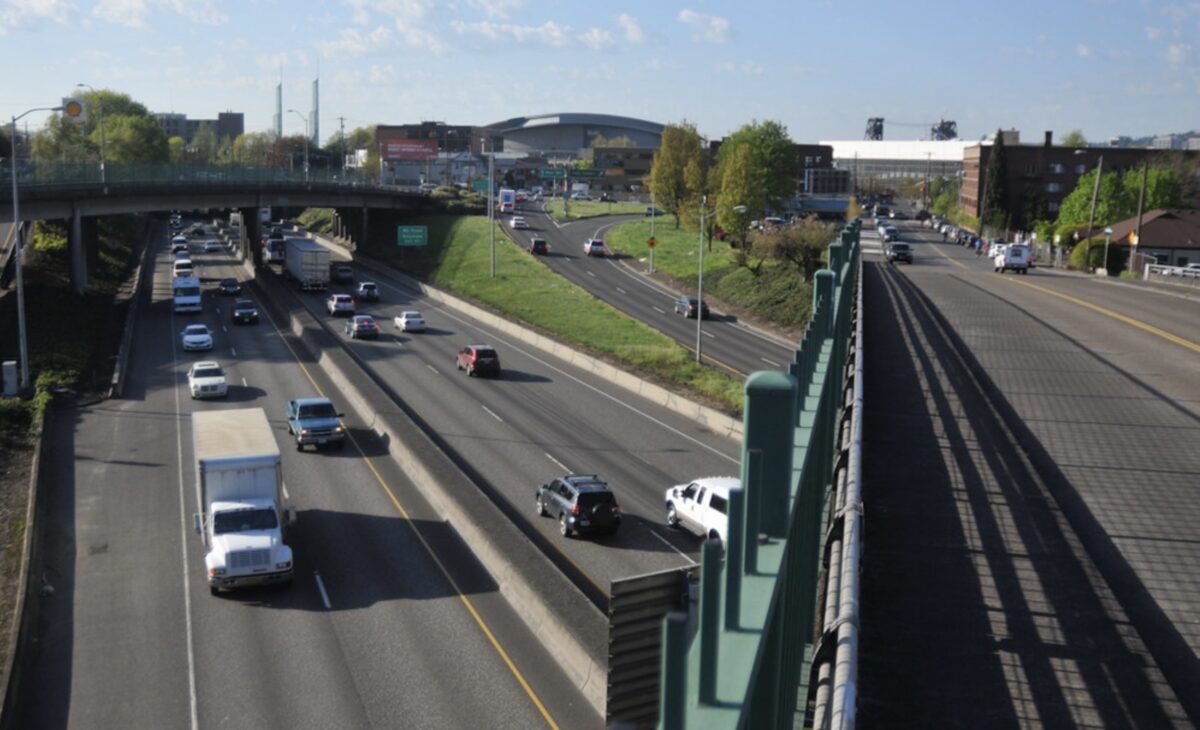 ODOT says even if they did do an EIS it wouldn’t stop the project from moving forward.
(Photos: J. Maus/BikePortland)


“I think the governments here are realizing we need to pay more attention to what the community is saying.”
— Paul Slyman, Chief of Staff to Metro President Lynn Peterson

The activist group No More Freeways was quick to call it a “win for the good guys,” after Willamette Week reported Tuesday that the Oregon Department of Transportation would be required to complete a full Environmental Impact Statement (EIS) for the project as part of their obligation to fulfill National Environmental Policy Act (NEPA) requirements.

This was considered major news because ODOT has said all along that — despite strong disagreement from environmental groups — their less-rigorous Environmental Assessment (EA, completed in February) was adequate. The news was also a big deal because doing an EIS would significantly delay ODOT’s march forward and give critics more time to organize and poke even more holes in the already embattled project.

But it’s important to note: No formal decisions have been made about what type of environmental analysis will be required. The Federal Highway Administration (who controls the NEPA process) has not made any final determination about the EA versus EIS question.

As reported by Willamette Week, Chair of the Oregon Transportation Commission (the governor-appointed body that oversees ODOT) Robert Van Brocklin said, “conversations” regarding “the question of what kind of environmental review to pursue” will begin in September.

Earlier this week ODOT spokesman Don Hamilton told me he wasn’t sure what form those conversations would take, but they’re likely to happen at the September 18th OTC meeting in The Dalles. 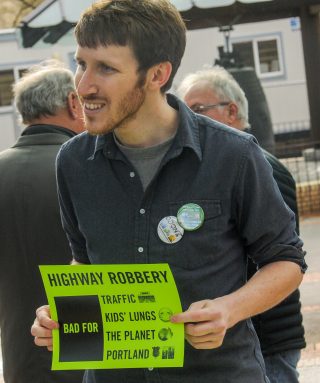 Aaron Brown from No More Freeways called this week’s news “a win for the good guys.”

One person following these conversations closely will be Metro Council President Lynn Peterson. Back in April Metro’s senior planner said ODOT’s EA was “inadequate” and “potentially misleading” but Peterson was far more diplomatic in her statement. When I spoke to her Chief of Staff Paul Slyman on Wednesday, I asked if Peterson would advocate for a full EIS. “I think we would say it appears to us that all signs are indicating that a full EIS is probably the way to go,” Slyman replied. He said their office hasn’t emphatically called for the EIS because they’re “open to being educated” that the EA is sufficient.

Given that the NEPA process usually follows a standard script that only includes the DOT and the FHWA, I asked both Slyman and Hamilton whether or not it was unusual for the OTC and other interested parties to be having high-level conversations about environmental analysis at this stage of the project.

Slyman said the fact that OTC commissioners are weighing in means what’s happening with the Rose Quarter project isn’t normal. “This does not seem like how these projects typically move forward,” he added. “I think the governments here are realizing we need to pay more attention to what the community is saying… the discourse has clearly been elevated… The commissioners are saying, ‘We need to get involved because what we’re hearing is that the agency might be out of step with what the community is telling us.'”

As for ODOT, Hamilton said the OTC’s involvement “Is not unusual at all.”

Hamilton, who acknowledges an EIS could very well be the next step, said despite the questions about environmental analysis, the project will continue to move forward. As per recently passed House Bill 2017, ODOT will receive $30 million per year in bond proceeds earmarked for this project (estimated to cost $450 million) starting in 2022. Their current timeline is to begin construction in 2023 and an ODOT rep told us this week they’re already at 5-10% design.

“We’re not going to stop everything and wait for this,” Hamilton said. “We’ve won broad approval from many areas and we’ll do what we need to do to make it happen.”

“despite the questions about environmental analysis, the project will continue to move forward.”

Why do ODOT spokespeople *always* make it so easy to despise their agency, question the veracity of their statements, doubt their commitment to what is sensible, prudent, wise?

Maybe it is already moving forward. Yesterday I noticed surveyors marking areas along the proposed corridor. EISs are always a mere formality once minds are made up.

ODOT, which I think can be safely renamed Car-DOT, seems to be hostage to motor vehicle interests. Some years ago I naively responded to one of ODOT’s “tell us how we can help you” outreach efforts. I asked about repairing some potholes and rough areas in a bike lane on a popular bike route slash arterial highway. ODOT responded by dispatching a crew that threw down some cold-patch in one small sinkhole, and that was it – the rest of the rough areas remained untouched. Clearly they couldn’t be bothered to address the actual problems – they just wanted to be seen as responsive. Then the ODOT PR-outreach people got back in touch to ask how they did with their outreach, but apparently the outreach people have no power to compel the road-fixers to do anything.

Don Hamilton is especially annoying. Something about his responses always smacks of “We know what we’re doing – now leave us alone.”

Anyone who has ever contacted ODOT about improving cycling infrastructure has come away frustrated, in my experience.

When I found out the EIS was the supposed “goal” I felt a little ripped-off. Your biggest complaint with the project is that they picked the wrong flavor of environmental review process? No, you think the project itself is wrong, don’t you? Complaining about the EA/EIS question instead of the project itself might seem like a good “guerrilla” tactic you could leverage against a bigger & more powerful adversary, but first of all you can’t do that without de facto affirming that the adversary is indeed bigger & more powerful (and that you’re smaller & weaker). Secondly by attacking on a technicality instead of a fundamental conviction, you affirm inadvertently that the project is fundamentally valid and sound, other than this one technicality. You’re saying, in effect, that there aren’t enough deck-chairs on the Titanic. That there’s not enough lipstick on the pig. That Ted Bundy was a horrible litterbug. It’s a default weak position, both tactically and morally. It’s even, almost a little bit underhanded, and it shares that trait with most guerrilla tactics, which generally rely on the fact that chaos is easier to create than order.

If you’re right, that this project is wrong, you stop the project, based on its wrongness. You go head-to-head. If you don’t believe that’ll work or you’re afraid to try, you’ve lost already. You do it by appealing to what Oregonians and/or Portlanders are, and what they value. This assumes you’ve been here longer than 5 minutes and actually know, of course. And for it to work, presumably said Oregonians also have to have been here longer than 5 minutes and actually remember. Or be educated quickly on it. And of course there’s no guarantee. It might well be the case that Oregon now, is actually majority-former-Californian (in the figurative sense… don’t want to pick on California) and simply wants more freeways and lanes. That may happen. But a decent and solid outreach effort needs to happen for it to be anything more than just a foregone conclusion. Right now ODOT thinks that’s what it is, and we’re kind of TELLING them it is.

I think you’re not giving folks enough credit, Glenn. A full on EIS can take so long that the funding might run out before the project can be built, or there can be more time for congestion pricing to be implemented. Also, a fuller EIS might show that this project just isn’t worth it for any price. I think you’re only seeing one small part of a multi-prong effort.

The goal is clearly for this highway not to be expanded. There are a few different approaches to try to make that happen. You’re seeing the trees and missing the forest.

Who’s the “you” to which you refer? Yeah, I wish we could intervene in some other way. But none of us have any ability to directly stop the project. It was decided by the legislature. Neither do the government actors, like Metro or PPS. Short of a change in the legislature and a re-vote, the activists are using the only tool available to them, which is to force delay with an EIS. An EIS also opens the door to lawsuits challenging the sufficiency of the EIS, which can further delay the project. Ultimately, as joan notes, the project can and often does die. There’s a reason environmentalists consider NEPA one of the greatest legislative achievements of the era, despite it being nothing more than a “formality” to “inform” the decision-maker of their decision.